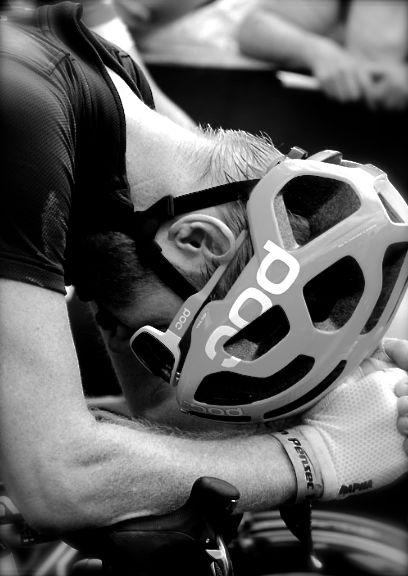 We drag ourselves up and down hills for a few hours, half a day, nudge into the night, emerge out the other side. We ride from one side of the map to the other, wiggle across the country, span a continent, circumnavigate the world. Up to and beyond where vegetation can’t survive, through deserts, tilt at mountains in the rain, we get lost in the lanes and maybe get a bit cold, our water-bottle’s gone slushy look. And we take pictures to show the world how hard it is and how it was a massive struggle of both mental and physical fortitude and there’s a gritty determined face in black and white there and we tell stories full of bluster and heroic pomposity and every time we retell the tale in the warmth of the pub the account gets exaggerated just that little bit more. The hill gets higher, the rain gets harder, the cold stings an inch closer to the bone, there’s an untimely puncture that lathers on another viscous layer of misery that may have been lifted from another tale and merged in the fudge of memory.

Well done us. Well done for enduring the hardship and the struggle. Kudos. Unfortunately none of this is hard. None of this is actually a struggle, not one single grimace into the wind, it’s just mucking about and showing off. Strut and swagger in a comfortable world, a little piece of hollow chest thumping that occupies a few hours in our safe and easy and mundane lives. You smashed it. Hear the ‘Boom’ echo emptily round the valley. Maybe there is a positive to be found in that at least we’re outside doing something, and digging deeper maybe playing to a tiny nugget inside some of us that’s hard-wired to step up to the edge of the comfort zone and annoying what we find with a stick for a few minutes. Then maybe it’s just to secure the validation and adoration of our peers and grasp the air for some long lost attention; look at me, I did A Thing. Lie back on the couch, make yourself comfortable and tell me about your relationship with your father.

That two or three hours a week that you’re pedaling uphill into a bit of drizzle isn’t hard, that little adventure you have at the weekend before you load your five thousand pound bike into the back of the Audi with the heated seats and driving home to your hot bath in a warm house to a lovely supper prepared by your doting partner that you wash down with a couple of artisan beers before settling to fall asleep in front of Netflix isn’t a struggle.

The cycling lexicon seems to have become infected with the canker of suffering. It’s almost become a religion to some. Ex Duris Gloria steers a little too close to Arbeit Macht Frei for comfort, and also too close to Godwin's Law to continue this analogy. We pedal the local loop and the globe in search of self-inflicted anguish, or just stay at home in the garage, sorry, Pain Cave, and inhale it through TV screens and displays on the bars, and then download it to other screens so everyone can see our sufferface. Look at me, sweaty, look how I have Put Myself Through It.

This cult of Suffering has to stop. The word has become diluted and is now almost meaningless. We’ve already lost Epic - once something reserved for crossing polar landmasses on foot because there was no alternative it’s now used to describe home insurance, and a 60 mile bike ride. None of what you do is suffering. It is the tedious rhetoric of a mediocre pastime.

All of this is self-imposed self-controlled hardship. We can start and stop this any time we like, unclip, have a cup of tea. Sometimes we even pay to do this. None of this is hard. There is a planned beginning and end to these voluntary sticky situations, no matter how horrible it gets there is always a finish, a way out. A bit of unpleasantness for a short while. Not hard. What is hard is dealing with adversity we have no control over.

Let’s start with an easily relatable example, something we’ve all been touched by somehow or other - ill health. Let’s just pluck Cancer out of the air as an example, that's hard, we’ll agree there’s a bit of suffering in there yeah? You might have had the misfortune to see or even experience that pain. Cancer can’t be made all better by a nice hot bath and a roast diner at the end of the day, that thing that makes the strenuous effort of your bike ride worthwhile, your suffering earned that. You can’t rub gravy on a tumor. Cancer keeps on going regardless, it doesn’t just hurt a little bit the next day to remind you it was there. It doesn’t always get better. The suffering often strives towards a conclusion.

How about filling your water-bottle, sorry, bidon, with dirty muddy stinking diseased water that might give you a runny bottom or even kill you? Water that’s a ten mile bike ride away. That would certainly ramp up the suffering on your ride wouldn’t it? Lots of people have to do that every day just to get by. Every day.

Just making it to the end of the day basically alive, that's what’s hard. An awful lot of people have to cope with that and they’re not on instagram showing their strained faces. They’re not socially linking and comparing their suffering to friends to see who won at today. #malaria. They are getting up and doing it the next day though, and the next day, and the next day with no end in sight, no recovery days. That's a real struggle. Riding a bike isn’t a hardship so let’s stop with the narrative of torment that’s telling us that it is.

Imagine coming back from a nice cycle to find your house burned down, your children killed and wife violated, and not by people from the rival cycle club, that’s what suffering is, the sort of thing that would suddenly make your ride really hard, and not because the bath’s broken.

If your bike ride started when you had to leave your town because it’s been bombed to shit and you may have lost some of your family in the rubble and you have to pedal through several countries to escape until you can ride no further to knock on the border of a country that doesn’t want you, then that would be considered a tough ride. That would be suffering, real deep down life suffering, a little different and worthy of the word to gritty and unshaven lifestyle suffering.

This so called suffering is entirely of our own volition, we can stop doing this any time we like, we can avoid the hills, we can not go race, we can go the flat and easy way. We can stay comfortably home. Some people don’t have the luxury of deciding whether to suffer or not, it is our privilege.

If we had real hardships, proper life-changing adversities thrust upon us; death, disease, illness, poverty, oppression, tyranny, victimisation, any of the vague horrors that canter randomly across the world, hardships that the victims have no say over, the sort of thing that would really piss on your weekend, would we like a sticker about it? How about a nattily designed t-shirt? Nicely done limited art print? Probably not.

Enough of this ritualised and revered hurt by choice, the ego-massage oil of faux hardship, enough of this Rule 5 posturing and preening rubbish. It is just riding a bicycle. When you have to deal with real suffering all day, every day, you don’t get a t-shirt. Until then STFU. Shut The Fuck Up.

Maybe there should be a t-shirt.