What's it like to race CrossVegas? Charlotte Sampson finds out

Charlotte Sampson works for SHIFT Active Media and her work took her to Interbike in Las Vegas, and as an avid cyclocross racer, she took part in a special category for industry people. Here's her account of the race.

This September I decided to embrace my love of cyclocross and do one of my first races of the season whilst working at America's largest bike show - Interbike in Las Vegas.

I have been racing Cyclocross for around two years, mainly the muddy courses within the Wessex League, a well-attended series which covers most of the south of England.  Cyclocross is my favourite discipline; the variety, atmosphere and challenge of getting through 50 minutes of pure pain, whilst normally covered in mud, is one I find myself doing most Sundays. 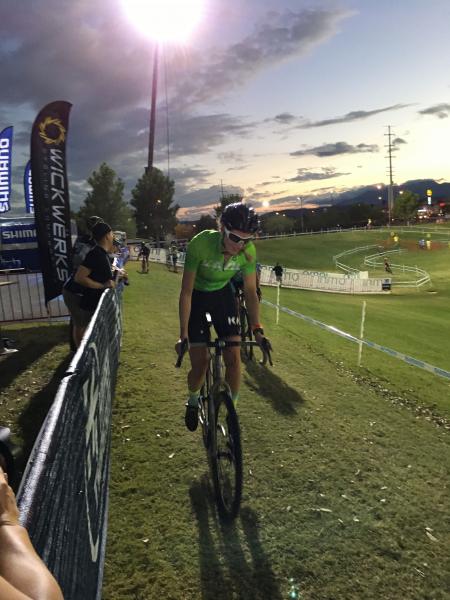 CrossVegas is a unique event and hosts not only the biggest cyclocross race in America but also the first race in the Cyclocross World Cup. The organisers put on a ‘Wheelers and Dealers’ race which gives men and women who work in the cycling industry the chance to battle it out for glory and to win a golden cowbell and KASK goodies.

A friend had promised me they would sort me out with a bike when I got there so, after a trip to Shimano to beg for some SPD’s which they kindly lent me for the race- I met up with Kaolin Cosmo Cummings of Roca Roja bicycle’s in Arizona who lent me his hand built…. singlespeed!

I have never ridden a singlespeed before, especially one with a massive sticker on it saying ‘my pit bike is a 6 pack’ and, as I was lining up on the start line with 24 other women who were commenting on my chain ring with its 42 teeth suggesting it perhaps wasn’t the best race to have picked to ride singlespeed, I gritted my teeth and clipped in..determined as my colleagues looked on beer in hand…grinning and what was about to unfold.

The Wheelers and Dealers race was supposed to be four laps of the grassy, undulating course including a 20m uphill sandpit, two sets of steps, barriers and two large wooden ramps. I had watched the brand new ‘SVEN the final year’ the night before and met the great man himself so, as the only female racing from Europe, I felt under a lot of pressure! I completed the race in three laps strangely going faster every lap with 10:11.2, 10:07.2 and 9:45.5, coming in what I believe to be a well-deserved place of 17th out of 25.

Looking back I’m really glad I took part, it was a brand new experience and meant I could really appreciate the effort made by the pro men’s and women’s teams who followed with triumphant wins from Sophie de Boer and Wout Van Aert.

The rest of the season will see me taking part in as many races as I can in the Wessex League – using my gears as much as possible!