The Colorful Yunnan Gran Fondo in China received global attention last month when video emerged showing a crash between two groups of riders racing for the line from opposite directions. Kiwi cyclist Daniel Carruthers was in the thick of it, and tells us here why that incident shouldn't detract from an event he thinks should be on your bucket list.

> What really happened in that huge head-on sprint crash in China?

Having lived and raced in China for six years now, I have a pretty good overview of what happens in the races there including good and bad organisers.

For the record, Nordic Ways, (the organiser of the Colourful Yunnan Gran Fondo among many other cycling events in China) are a proven organiser and put on better events than many of the Chinese run cycling events.

It was just pure bad luck that this crash happened to them, it could happen to any organiser around the world.

I have seen in the social media stream, many comments that are borderline racist —‘it could only happen in China’, ‘how many of them were on Chinarellos’, ‘thats China for you’.

Most of those people who make comments like that probably have never been to China, let alone compete in a bike race there.

In reality, bike races in China are better organised than many races in the Western world and they are held on roads 100 per cent closed off to traffic.

On average I do about 20 races a year in China and that equates to 120 races at a minimum over the six years I’ve been in China.

During that period, I have attended many Nordic Ways events and all have been successful and applauded by Chinese and foreign bike riders alike.

This incident we witnessed last month was perhaps a one-of-a-kind, we may never see it happen again in the history of cycling.

The overall event itself, the Colorful Yunnan Gran Fondo is now in its second year and rapidly gaining a solid reputation for itself in China as a challenging scenic stage race.

This is welcome news in a country that has very few stage races for amateur riders - the only other stage race for amateur riders is the Tour of Sailimu Lake (2016 will be the 10th year it has been running), which I’ve attended four editions and will be back in 2016 to line up again.

As for the Yunnan Gran Fondo, many riders will be back in 2016 to line up again, despite the crash incident in Dali.

If you have not yet been to China and would like to find an excuse to visit and race bikes, perhaps consider adding the Colorful Yunnan Gran Fondo to the list.

Here, you'll find my account of the last few moments leading to the crash at the finish-line and while the final corner’s lack of marshalling and tape was the main culprit leading to the spectacular crash, the question must also be asked of the riders who ‘re-started’ the sprint—why did they do that?

The event carries all of the Gran Fondo elements: challenge, long courses, mountains, stunning scenery, and not to mention interesting cultural stuff in each of the five different cities.

At the front, the riders were serious and all about racing — this is typical and you will see this in all Gran Fondos around the world; at the back and in the middle, are riders that are leisure focused only and there to experience the region, stopping to take photos along the way and taking their time.

You will see these riders in any Gran Fondo around the world.

The Colorful Yunnan Gran Fondo is unique because it is five days of amazing courses witnessing the stunning famous beauty of Yunnan as well as witnessing the diverse cultures (there are 55 different cultural minorities in Yunnan alone).

Kiwi cyclist Daniel Carruthers (40) is a familiar face on the Asia cycling scene, particularly China. He is a two-time Deaflympian, representing New Zealand in Taipei (2009) and Bulgaria (2013), and is very passionate about cycling events and cycling destinations around Asia. He can be found on Strava, Instagram and Facebook. 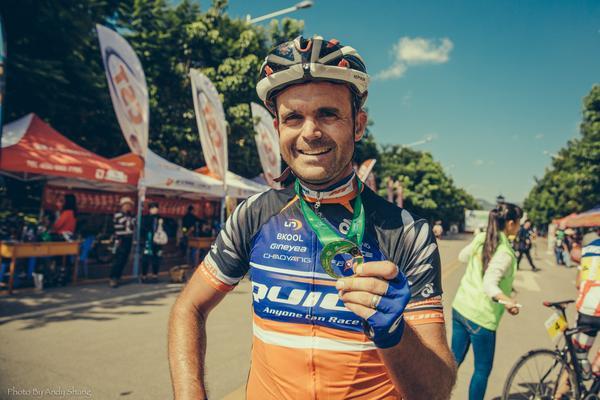