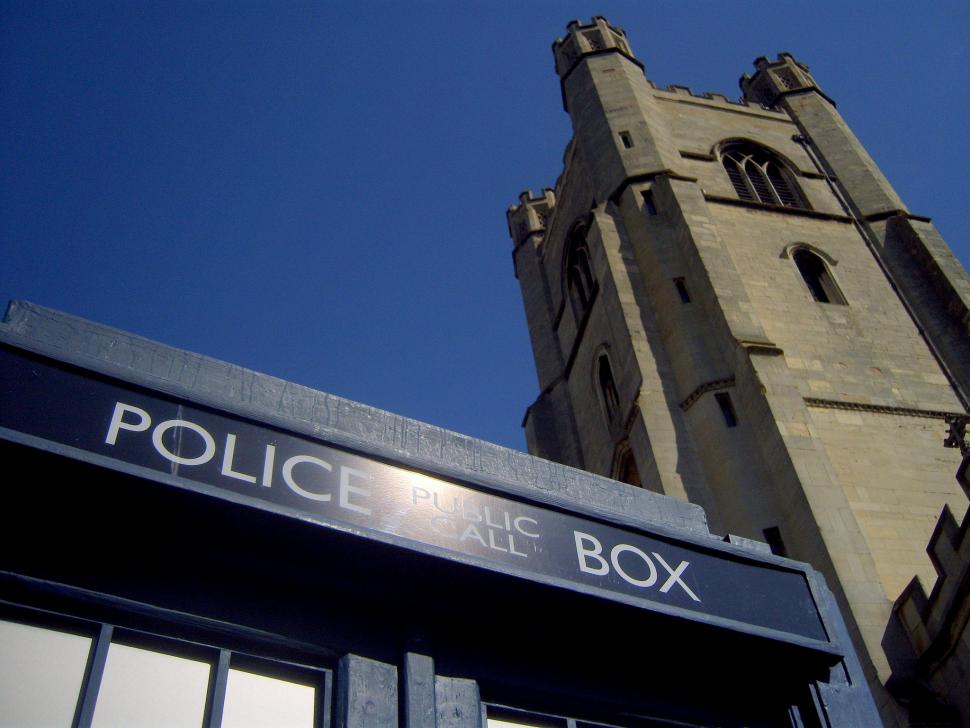 A police box in Cambridge (CC BY 2.0 James Bowe|Flickr)
Narkiness between Cambridge police and cycling advocates goes up a notch

Things have got a bit narky between cyclists and our police here in Cambridge lately, thanks to the force launching an ill-considered social media campaign to fight the scourge of the #badlyparkedbike. I found out last night just how sensitive some officers have become when I was threatened with arrest under the Prevention of Terrorism Act for trying to take a photo of a police car parked in a bike lane.

My girlfriend was driving me and her kids to choir practice when we spotted a police car parked in the cycle lane on Cambridge's East Road.

Courtesy of Google Streetview, here's what the spot in question looks like:

Cambridge police has had a wave of criticism lately, first over the idea that it mattered if a bike was parked 'badly', but crap car parking was just 'daft' and then over the handling of that criticism.

I couldn't resist getting out to take a photo of the police car. If a car parked in a bike lane, forcing cyclists out into the traffic on a busy road isn't parked badly, what is?

As it happens I didn't get the shot because I'm a total numpty with a phone camera. Yeah, I know, as a street activist I'm more John Thomas than Mark Thomas.

As I walked away, the PCSO who had been in the car caught up with me and asked what I was doing. I told him I was taking a photo of the car because it was parked in a bike lane, for #badlyparkedbike and #daftparking.

He asked for my name and address, which I refused to give. There are very few situations in which a PCSO has the power to require your details, and this wasn't one of them.

He said that I had taken a photograph of a government vehicle as if this was supposed to mean something. It doesn't, of course. The Association of Chief Police Officers' Guidance for Photographers says:

Officers and staff … should not prevent anyone from taking photographs in public. This applies equally to members of the media and public seeking to record images, who do not need a permit to photograph or film in public places.

• There are no powers prohibiting the taking of photographs, film or digital images in a public place.

• We must acknowledge that citizen journalism is a feature of modern life and police officers are now photographed and filmed more than ever.

I continued to refuse to give him my details and carried on walking. The PCSO put his hands on me to try and stop me. I pointed out, probably quite loudly, that this was assault and he really needed to take his hands off me.

He then asked me if I'd like him to call a PC who would arrest me under the Prevention of Terrorism Act for taking a photo of a government vehicle.

Yep, that's right. Taking a photo of a police car parked badly in a public place is equivalent to planning to blow up a plane.

I'd had enough by this point. I just wanted to rejoin the family, grab a quick coffee and do some singing. I resisted the temptation to call his bluff or do something surreal like start undressing and see if he stuck around till I was down to my undies or beyond.

Instead I just asked him to leave me alone. We went through the dance of him trying to block me and me telling him to get his hands off again and a few seconds later he turned around, perhaps remembering that he'd left his car parked in a bike lane.

Later that evening I lodged a formal complaint. I wasn't particularly rattled by the experience. I can do without being handled, but if I can't face down an ill-informed PCSO when I'm old enough to be his dad, then it's time to hand in my Stroppy Northern Git card.

But Cambridge police needs to take a hard look at the attitude of some officers to cyclists. The dismissive attitude of the social media operative behind #badlyparkedbike is also the subject of a complaint, and the PCSO I encountered was clearly not happy that his vehicle might be negatively featured on Twitter.

Cambridge police has just begun its annual crackdown on cyclists without lights, but is reliably claimed to ignore reports of cars blocking pavements and so forcing pedestrians into the carriageway.

Cambridge has the highest rate of bike use in the UK, yet even here some police officers think people on bikes don't matter, or are a problem, rather than being regular citizens just getting around.

At one point in our conversation, the PCSO told me he had parked there because he was responding to a call. But he could have easily stopped in the car lane, left the bike lane clear and made drivers go round his car. I'm sure that possibility never even occurred to him, and there lies the problem.

What do I hope will happen as  result of my complaint? First, that Cambridge police will make sure its officers understand the law on photography and don't make up nonexistent offences in order to harass people. Secondly, that the police will remember that this is a cycling city — Cambridge Cycling Campaign has a larger membership than any of the local branches of political parties — and people who ride bikes have the same right to have their concerns taken seriously as everyone else.

UPDATE: I've now spoken to the PCSO's sergeant who confirmed that I should not have been threatened with arrest under prevention of terrorism, and that it is not illegal to take photographs of anything in a public place in the UK.