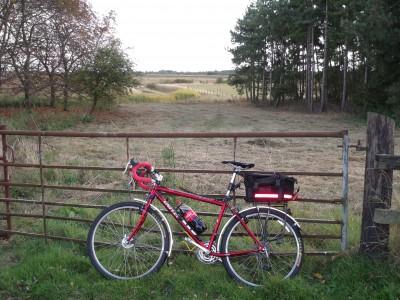 Yes, there are some very strange developments afoot here in my rural parish and the Teenage Dream is very much coming of age. Celebrating its eighteenth birthday back in August, we’re awaiting delivery of Acor one-inch carbon forks tested here in April and I've since uncovered a suitable bar and stem. My love of fat-tyre flyers with beefy drops is legend and more recently, thanks to On-One’s Midge, I’ve had a thing for the flared varient although this has been largely confined to fixed and cross contexts.

However, these super-stiff WTB beauties and machined stem with a very modest eight-centimetre length are to serve as the Teenage Dream’s new cockpit! I’d toyed with Salsa’s more subtle Bell Lap but could only find an oversized stem, hence this quirky pairing.

Shapely Cane Creek SC5 levers will be commanding Miche dual pivot Performance callipers with mudguard friendly 57mm drop, thus completing the transformation. Elsewhere, my much documented and infamous Coca Cola dependency is further facilitated courtesy of this most marvellous BBB bottle cage, allowing a litre and a half to accompany me through the deserted lanes and local byways. Unfortunately, my unbridled belching has incurred the wrath of local sheep who feel aggrieved that climate change is being wrongly attributed to their oral flatulence.

Hinault may have badgered his opponents but racing in the days BC (Before Camelbak) I found a well-timed belch directed at the rider behind bought a few precious seconds, allowing me to steal a march on an advancing and arguably more talented rival. These days, my six year-old simply barks a reproving “Daddy!” from the tag-along.

Staying on the subject of belching, I happened upon this site while searching for welding supplies. www.belch.com is the brainchild of a one-time shipyard welder who has a lot to say on the subject and most of it derogatory. The grandchild of an old-school artisan welder I can appreciate the dark, gallows humour expressed in the “Dead Welder, Stupid Welder” sub-section.

Now, whilst in no way attributable to the latest generation of wonder cleaners, a little word of warning for those choosing to improvise. This ice cream tub played host to some old and very grimy alloy stems given a liberal spraying of a solvent based degreaser. Within thirty seconds, said solvent had virtually consumed the base!

I recently sold my unused BOB Yak and resurrected my Revolution copy from storage. The Yak wasn’t used and hadn’t been in some years so while I’m generally a very happy hoarder-especially when it comes to frames and related equipment, sometimes there's no merit in duplication.

The Revolution enjoys some refinements over older Yaks-specifically a less vulnerable hitch assembly and when not in use, the design folds into its own sack for easy, unobtrusive storage. Fashioned from Hi-tensile, rather than aircraft grade 4130 Cro-moly steel means in the highly unlikely event of breakage, it’s easily repaired using MIG and Oxyacetylene equipment typically found in roadside garages.

So, should you see a red Univega towing a trailer groaning under the weight of Coca Cola and Argon/Co2 shielding gas.....cheery waving, or belching will be reciprocated!