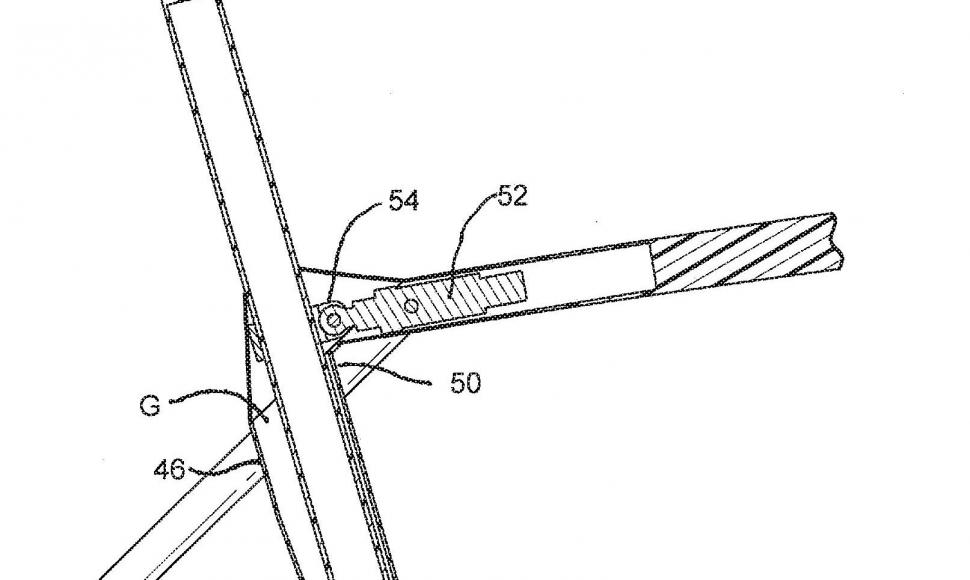 A US patent granted to Specialized this week (16th February 2021) suggests that full suspension could be added to the Roubaix road bike range. Bikeradar first picked up on this one. 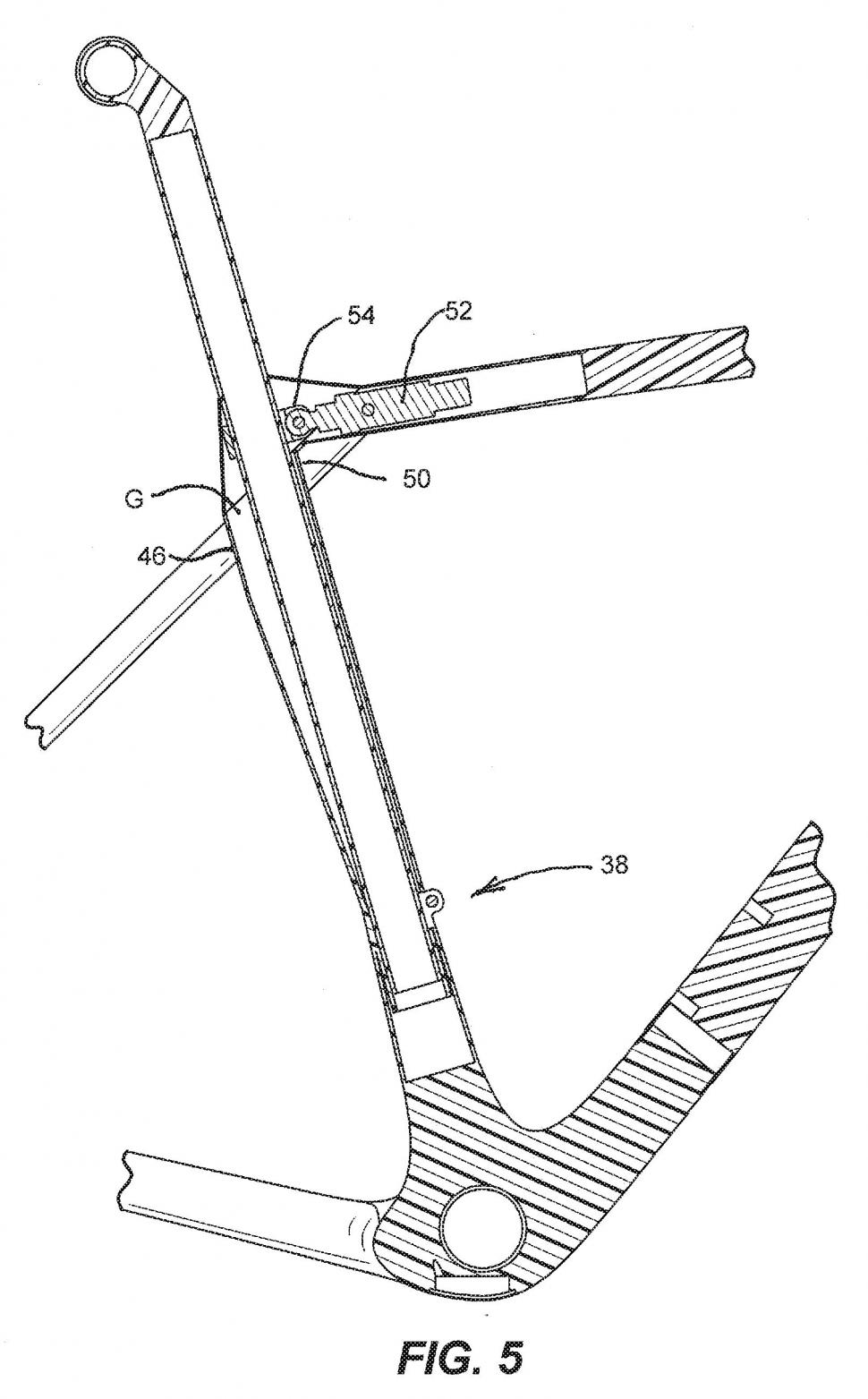 Like many other bike and component brands, Specialized is granted numerous patents every year. Some eventually make it to market, others don’t. Is this one ever likely to see the light of day? We’d say... hmm,  definitely maybe. 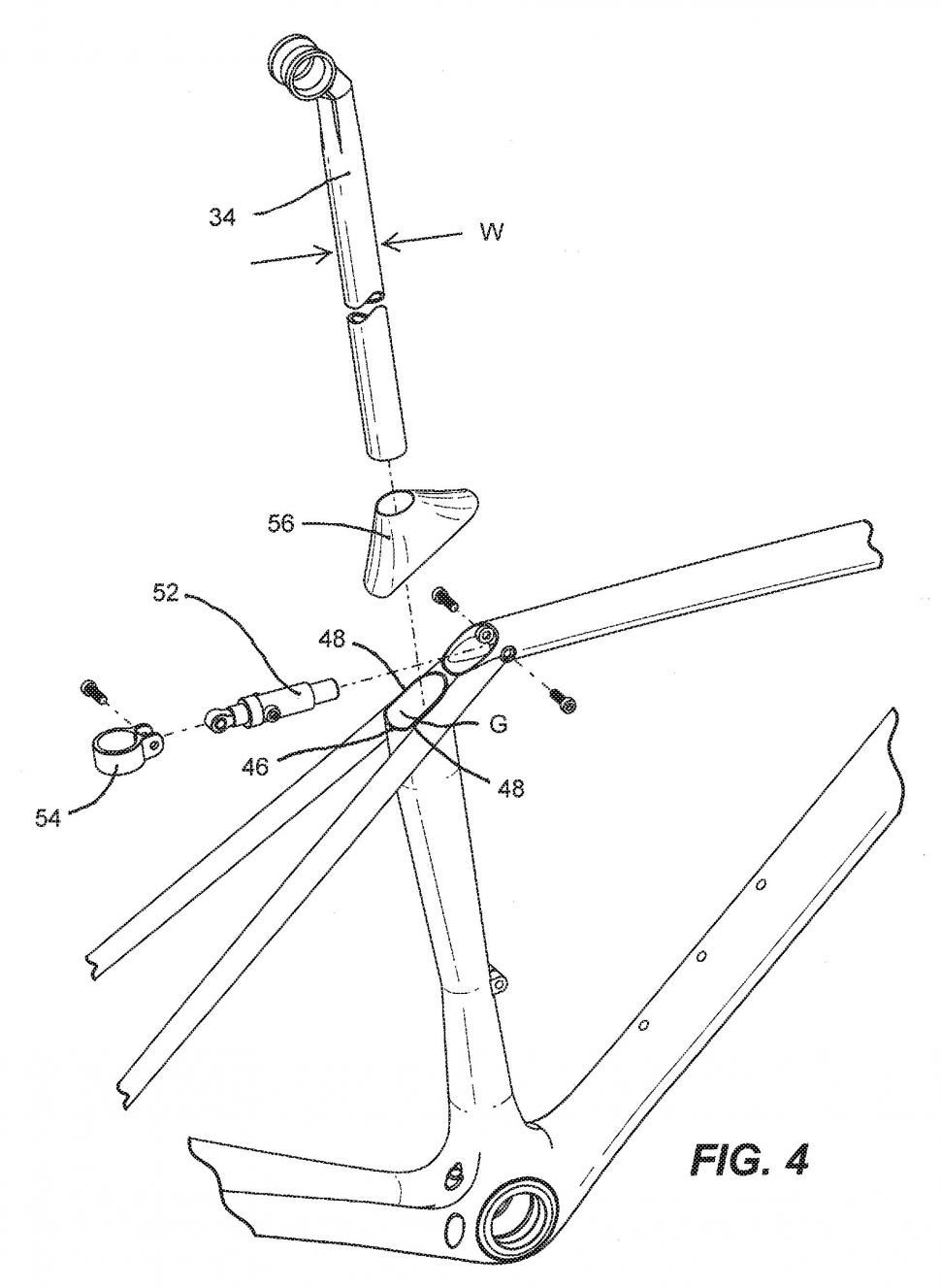 As usual, the patent is written in the most convoluted language in the world, but the gist is that the upper part of a super-long seat post is able to move relative to the frame, with a damper that’s positioned at least partially in the top tube controlling that movement. A collar is used to secure the damper to the seat post. 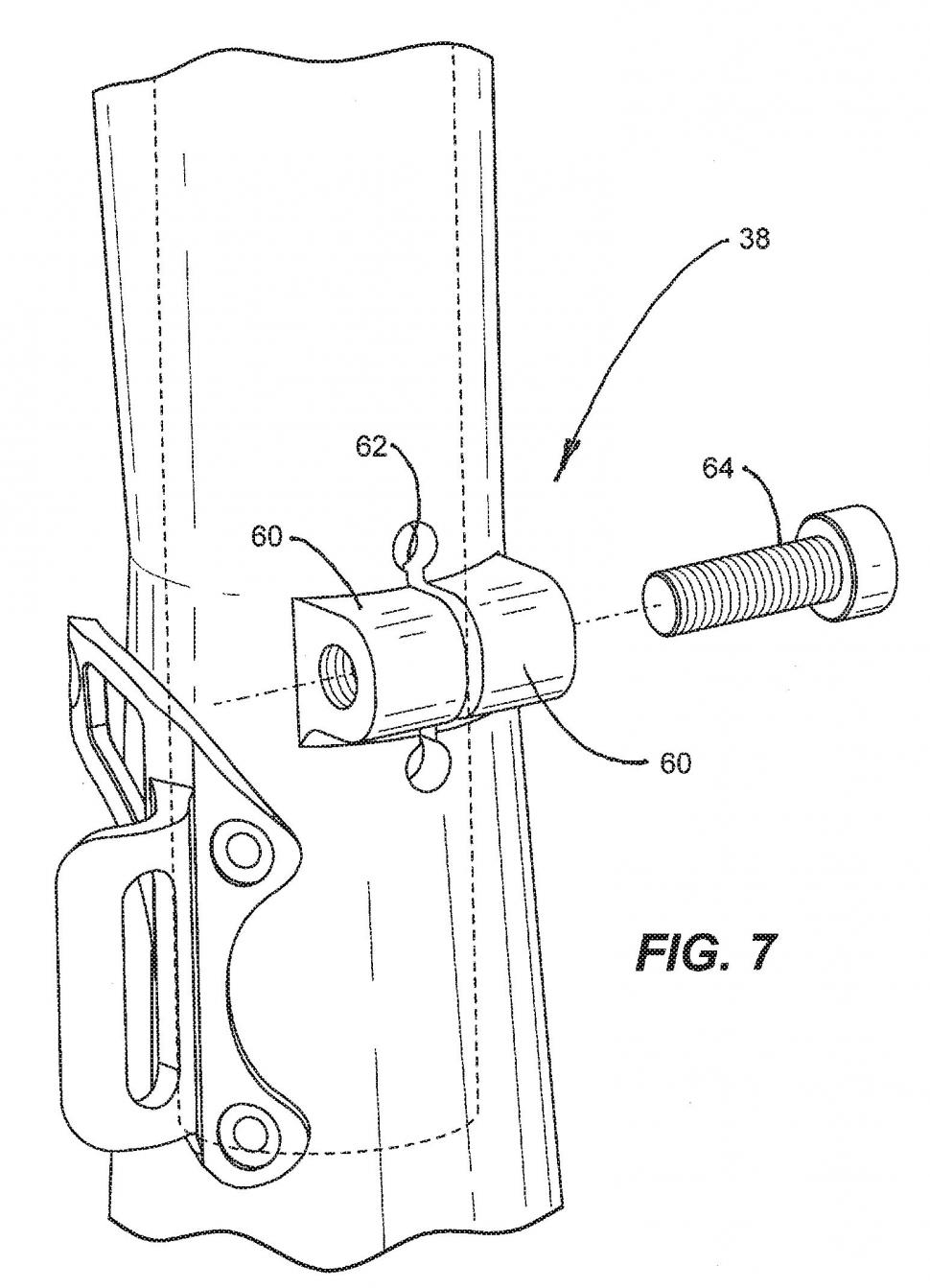 The seat post is rigidly secured to the frame low down in the seat tube – right down by the front derailleur mount, in the picture above. However, rather than fitting tightly over most of its length, there’s enough of a gap between the seat post and the seat tube to allow the post to flex.

None of the frame tubes moves in this system, it’s just the seat post flexing with that damper managing the movement.

That said, Specialized also throws in that “it should be appreciated that instead of flexing the seat post could be designed to pivot or hinge relative to the frame.”

What’s the point? There are no surprises here…

“In some riding conditions, such as when riding long distances or over rough roads, it would be desirable to reduce the amount of shock or vibration transmitted from the road to the rider,” says Specialized. Fair enough.

We can take from this that Specialized considers its solution to be lightweight and that it doesn’t affect lateral stiffness. 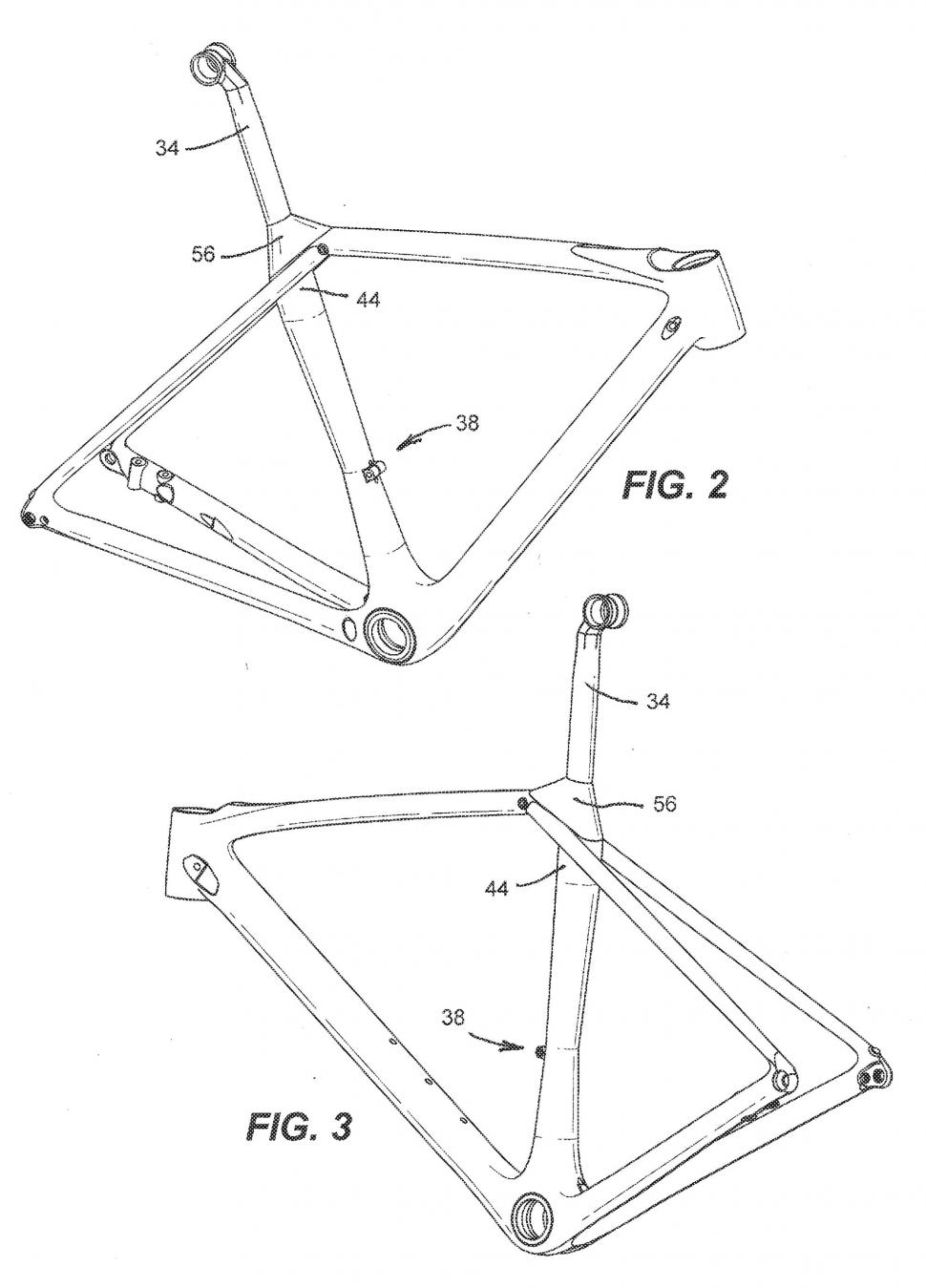 Specialized says that the damper could be, for example, “an oil-filled through shaft damper with a low speed rebound adjuster”.

Such a damper would have “bushings at each end of the outer tube so it can take side load from the seat post” and “due to the close fit of the end bushings, the damper [would provide] lateral stability to the seat post”

As is usually the way, Specialized limits the scope of its patent as little as possible but says that the upper section of the seat tube will be flared to create a gap with the much narrower seat post.

“By virtue of the… flared portion and gap, the upper end of the seat post can move (eg flex) rearwardly and downwardly to facilitate the absorption of shock and vibration travelling from the rear wheel and through the seatstays,” says Specialized.

A boot, which could be made from silicone, would cover the opening at the top of the seat tube to keep out dirt and water.

What about different rider sizes and preferences? Specialized has thought of that.

“The present invention allows the seat post to be customised to the rider's preference by changing the material, thickness, shape, or other relevant characteristic to achieve a seat post with the desired dynamic performance.”

In other words, you’d need to swap the seat post.

“In an alternative embodiment, the gap between the seat post and the flared portion could be filled with a resilient bushing to provide extra support to the seat post and resistance to flexing,” says Specialized. “In the event that a rider perceives that the seat post is flexing too little or too much, the bushing can be replaced with a softer or stiffer bushing to achieve the desired amount of flexing of the seat post.”

That's not the sort of thing you'll be doing mid-ride. No reference is made to the possibility of on-the-fly adjustment.

Although certainly distinct, Specialized’s system is vaguely similar to Trek’s IsoSpeed in that it maintains the diamond-shaped frameset geometry while allowing the seat post, and ultimately the saddle, to move down and back in response to bumpy ground – and the relationship between the wheels and the frame is unaffected. 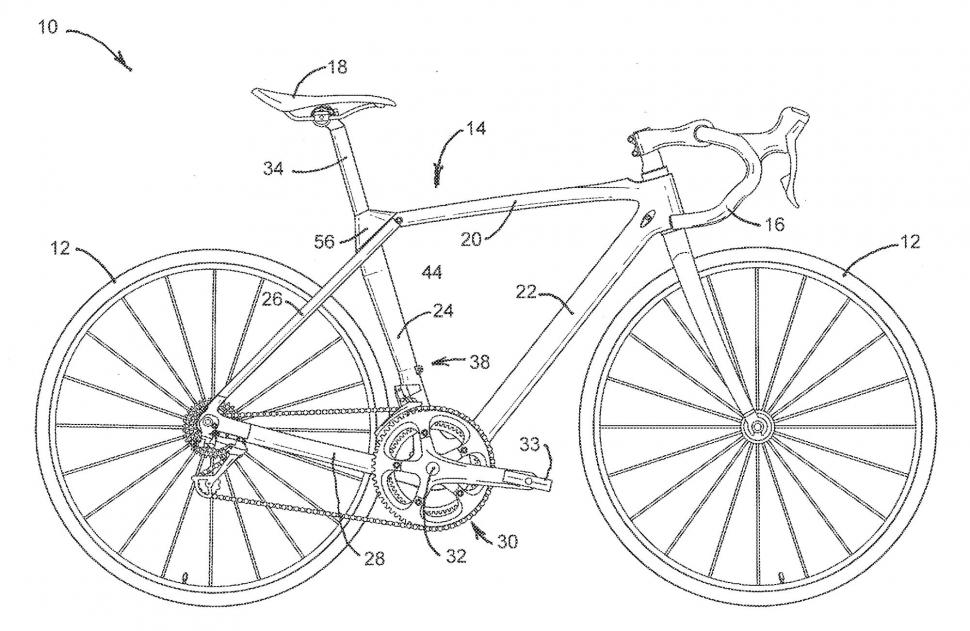 Do we think it’ll happen? If Specialized can get that damper to play nicely with the top tube, who knows? The Roubaix range already contains the Future Shock front suspension system. That said, there’s a lot of extra gubbins (a technical term) involved in this design, so it’ll certainly add weight.

Also, we have to say that it seems like a hell of a complicated way to get a seat post to flex – even though, we must admit, the inclusion of a damper to control rebound does sound interesting.

Of course, although the drawings show a road bike, it could be that Specialized’s Diverge gravel bikes would be a more natural home for this tech.

As is always the way with patent trawls, we’ll just have to wait and see.