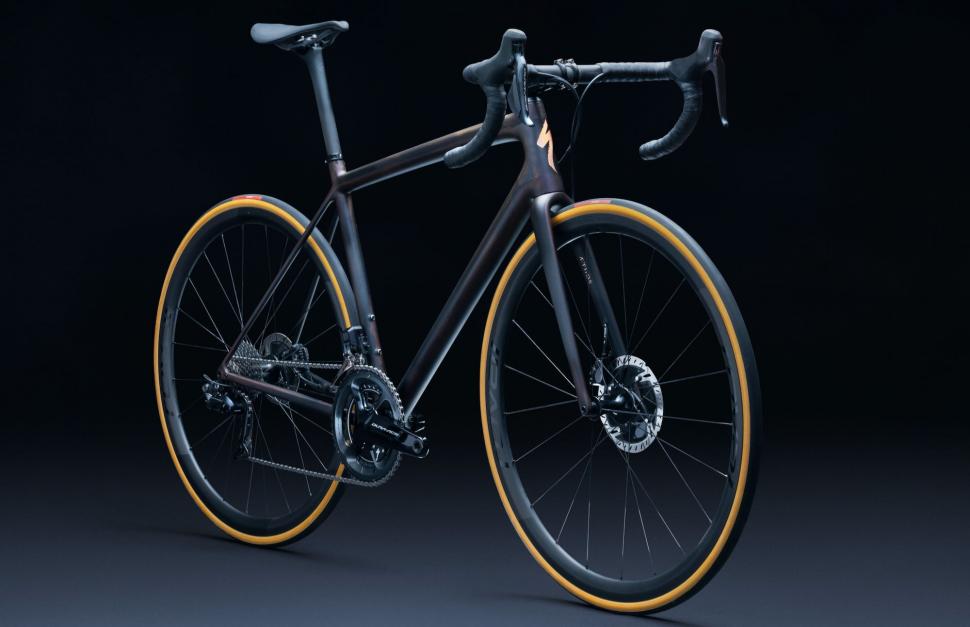 New model is built around a 588g frame with complete bikes from 5.9kg – but it’s all about the ride quality, says Specialized
by Mat Brett

Specialized has revealed a new disc brake road bike called the S-Works Aethos which it says is the most technologically advanced model it has made, built around a frame that weighs just 588g (56cm version). The US brand says that it chased ride quality rather than weight in itself, but that its 5.9kg complete bikes are the lightest disc brake models ever produced with everyday – albeit high-end – components.

Although the Aethos frame is UCI-approved, it isn’t designed for racing, being well under the 6.8kg minimum weight limit. So what’s the point of the Aethos? Specialized says that it is aimed at riders who prioritise handling and ride quality above aerodynamics, and who want the ultimate high-performance road bike unrestricted by competition rules. 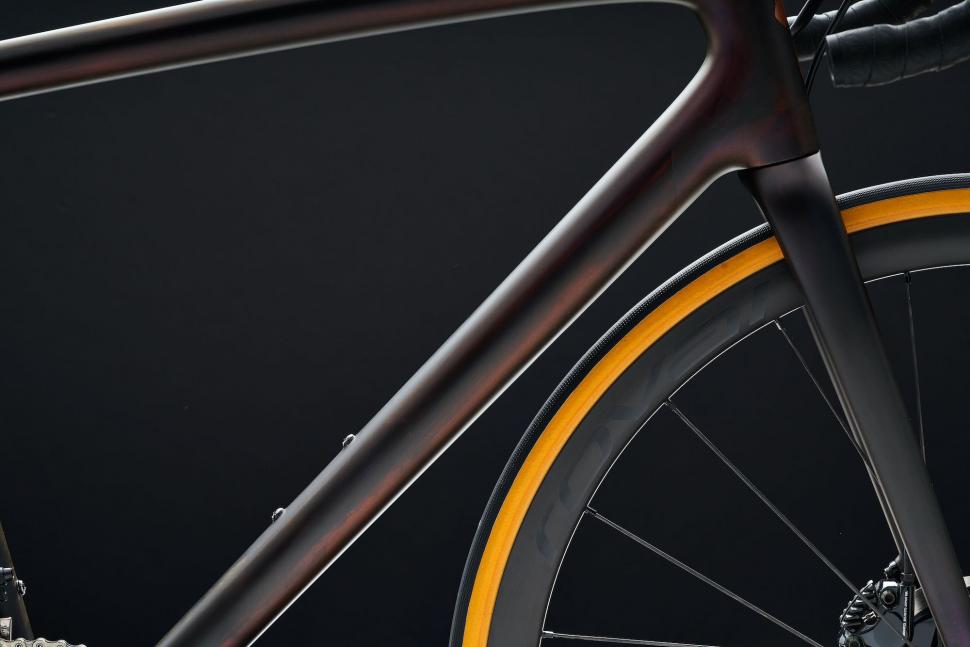 “There are riders out there that yearn for more than racing, that see the experiences of the open road as an equivalent to toeing a start line,” says Specialized.

“The demands of this sophisticated rider equal that of any racer, for where racers want for speed, these riders demand a package that accounts for everything else, too. Sprightly climbs towards the clouds, wicked descents on the other side – they demand superior handling and an unrivalled ride from a bike that’s the epitome of quality, performance, and style.”

Oh, and if that appeals, you’d better have a few quid in your pocket too because the Aethos ain't cheap... But you already guessed that.

The Aethos is the culmination of a project by Peter Denk and Sebastian Sevet, the engineers who worked on the Specialized Tarmac SL6 (and many, many other projects; Peter Denk has notably developed bikes for Cannondale and Scott in the past). 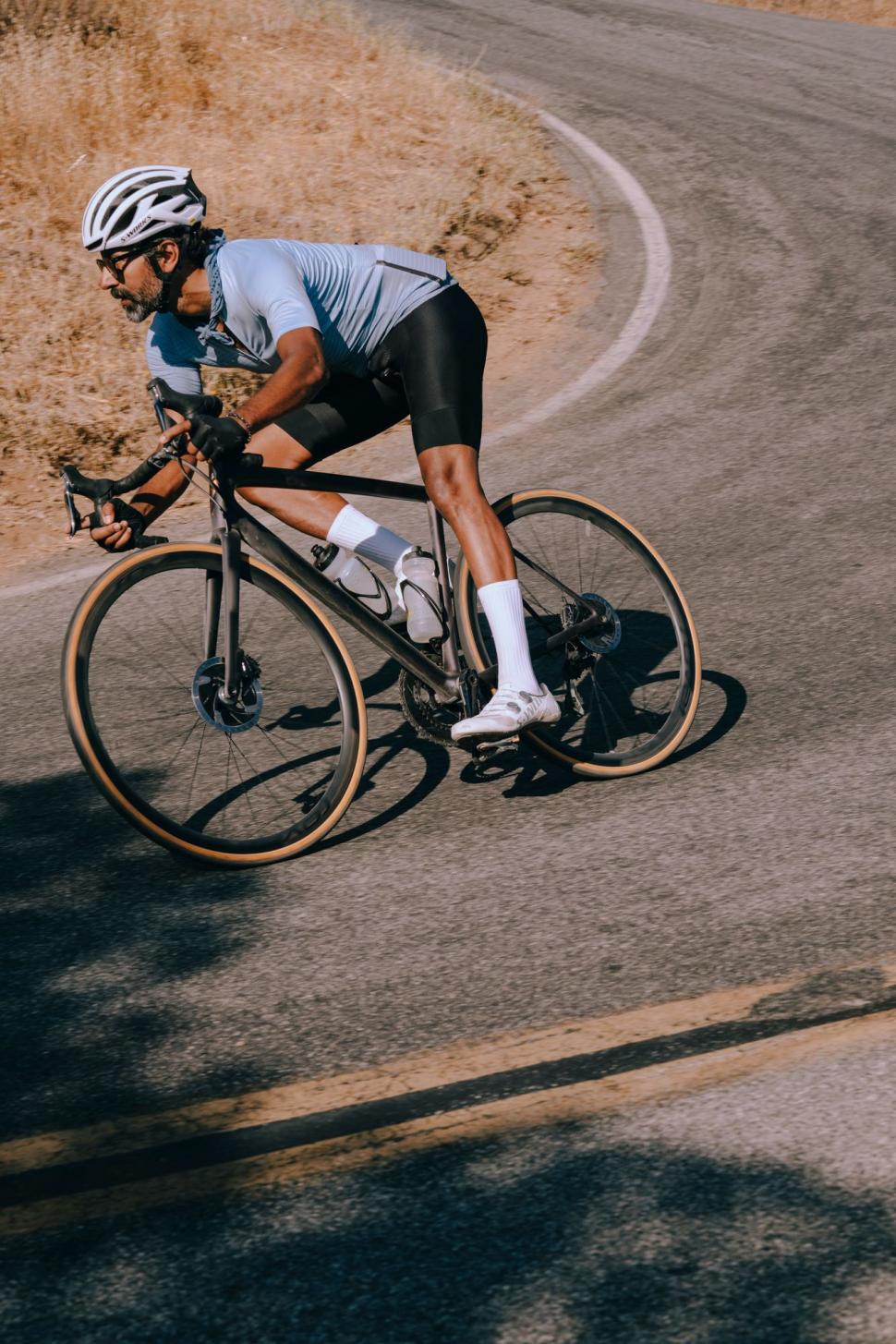 "There’s a dogma in cycling that we need a big down tube, a fat bottom bracket and great chainstays, but when I saw how these frames behaved I thought that maybe we’re wrong, maybe something completely different is going on and we’re using the wrong proportions, the wrong shapes and the wrong tapering.

“I went home from Morgan Hill [California, where Specialized is based] to Germany and discussed it with Sebastian. We thought there was a smarter way to do things.”

Peter and Sebastian felt that the bike industry’s understanding of how forces flow through a frame was incomplete and that there was potential for massive improvements. They thought they could improve on the ride experience delivered by a 700g frame, believing they could go significantly lighter, but required what Specialized describes as “staggeringly large supercomputer simulations” to work out the the optimum tube shapes.

“We used [these supercomputer simulations] to subtly alter round tube shapes,” says Specialized. “This made them more conical in key areas to deliver huge gains in stiffness and balance with the minimum amount of material.”

Peter and Sebastian decided that there must be no ‘lazy fibres’ in the finished design. In other words, every fibre should be loaded and tense – doing a job – rather than just adding weight. They concluded that there were too many ‘stiffness layers’ – or extra plies – in most frames.

“With these new tube shapes, we needed an entirely new way to lay-up frames,” says Specialized. “Thankfully, it’s one which resulted in reducing the number of needed plies by 11% compared to the Tarmac S-Works SL6.

“By utilising larger, longer, and more continuous, unbroken plies, we were able to achieve more consistent positioning than on any frame we’ve made before. 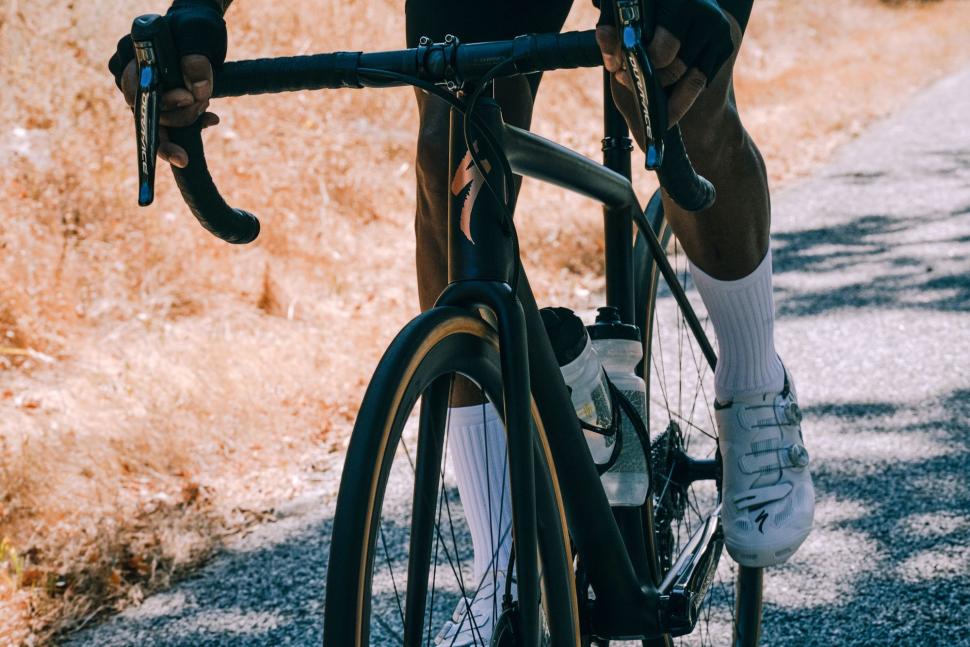 “The wall thicknesses of the tubes themselves are substantial throughout the frame, but because of the smaller number of the stiffness layers, the overall weight went down significantly.”

Peter says he knew that they were on to something when their first prototype frame was very stiff in most areas, passed about 70% of Specialized’s internal tests (which is high for a design at this stage of its development) and weighed just 554g.

“We put it on the test machine and the frame behaved so beautifully – it was so stable,” says Peter. “We only had to add 10g and we could test ride the frame. That was the moment we knew we had discovered something big.”

Specialized doesn’t publish detailed material specs but the S-Works Aethos is made using what it calls FACT 12r carbon and layup technology. It says that the finished version of the S-Works Aethos frame weighs just 588g in the lightest colourways (that’s the average for a 56cm frame; some individual examples in that size might be as low as 580g) while the fork is 270g. According to Specialized, the Aethos outperforms key rivals like the Canyon Ultimate CF Evo 10.0 Ltd and Cervelo RCA in terms of stiffness to weight – although these claims haven’t been independently verified. 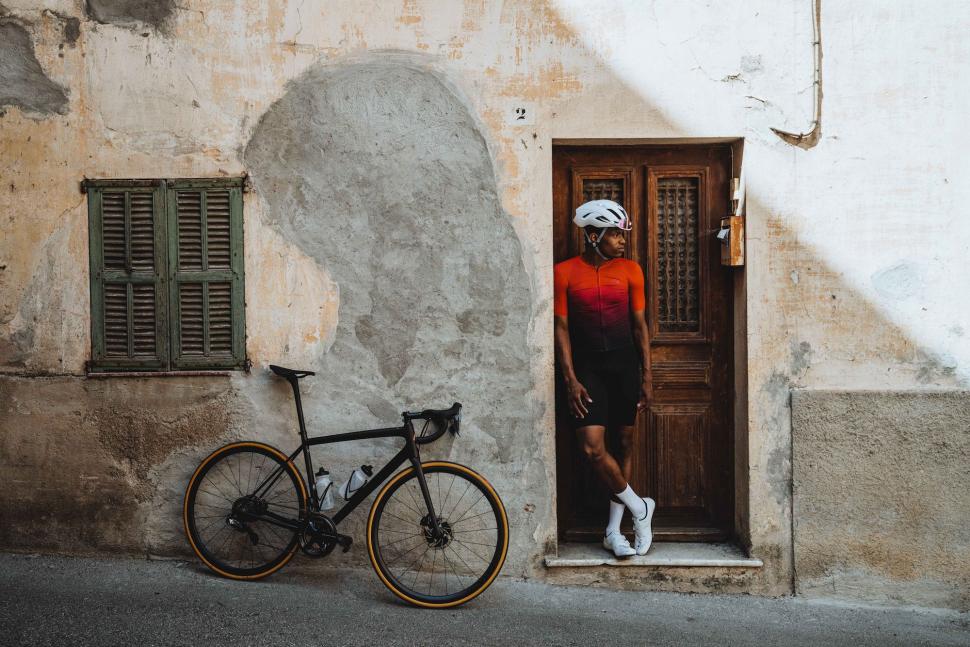 Specialized also says that the S-Works Aethos is no more delicate than other bikes of its ilk, coming with a rider weight limit of 125kg (19st 10lb). In fact, Specialized describes it as “exceptionally durable” thanks to optimisation of the tube shapes and layup.

“Abuse this frame like any other frame,” says Peter Denk.

Specialized releases a Founder’s Edition of every new platform, in the Aethos’s case limited to 300 complete bikes, each with a claimed weight of just 5.9kg. To get that low the frame is fitted with Roval’s 1,248g Alpinist CLX wheels and the Roval Alpinist bar/stem cockpit (the first production bike to feature these). It has a Shimano Dura-Ace Di2 groupset with a CeramicSpeed bottom bracket and pulley wheels.

The S-Works Aethos frame is compatible only with electronic drivetrains and hydraulic disc brakes. 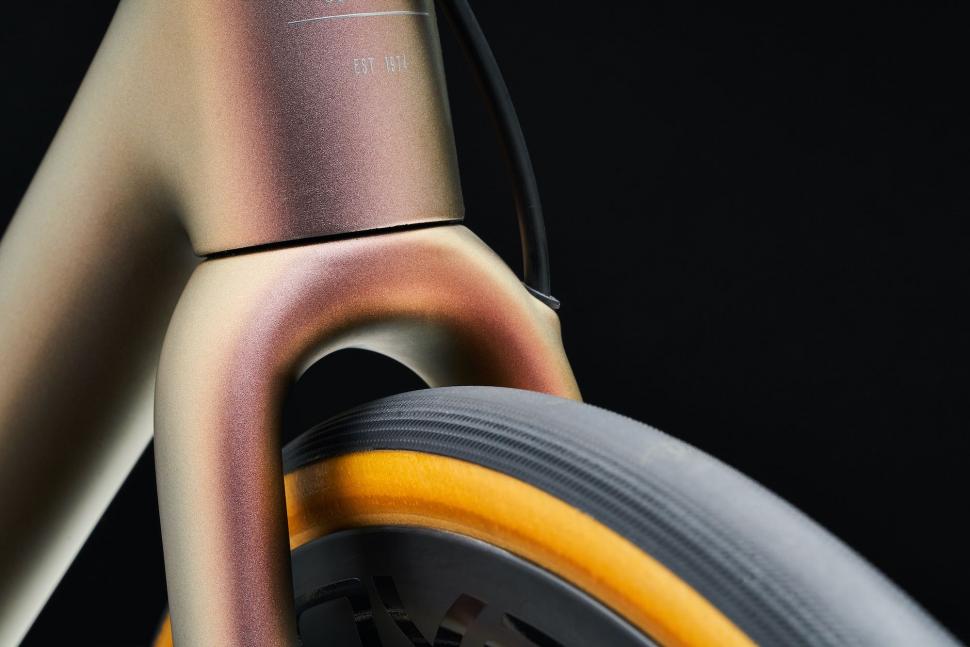 Complete bikes come specced with 700x26mm tyres but you can fit tyres up to 32mm wide on 21mm rims. This leaves 4mm of space all round.

If you want to run a 1x (single chainring) drivetrain, you can remove the front derailleur hanger. 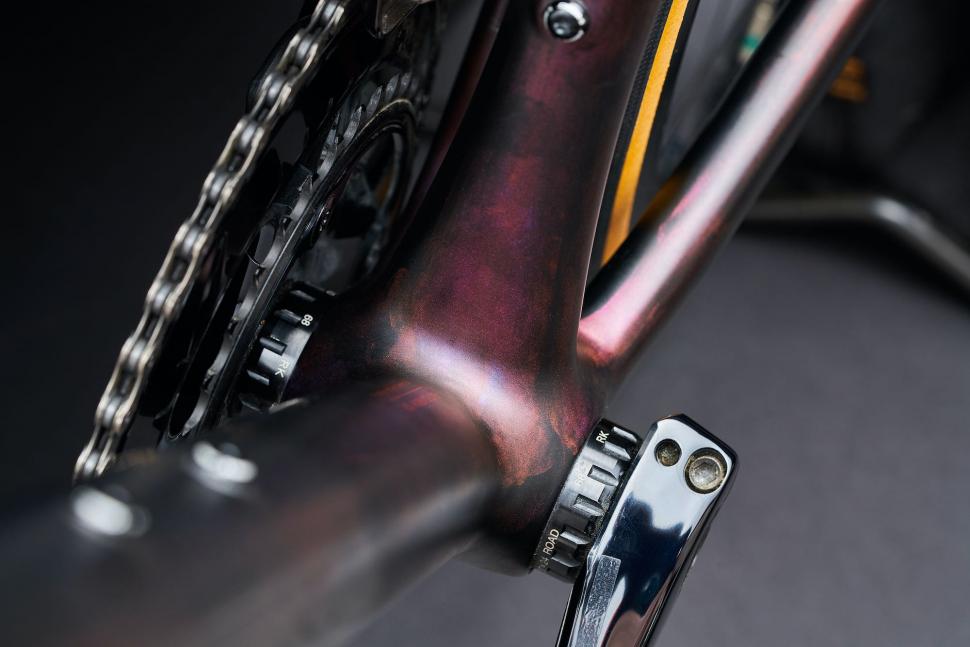 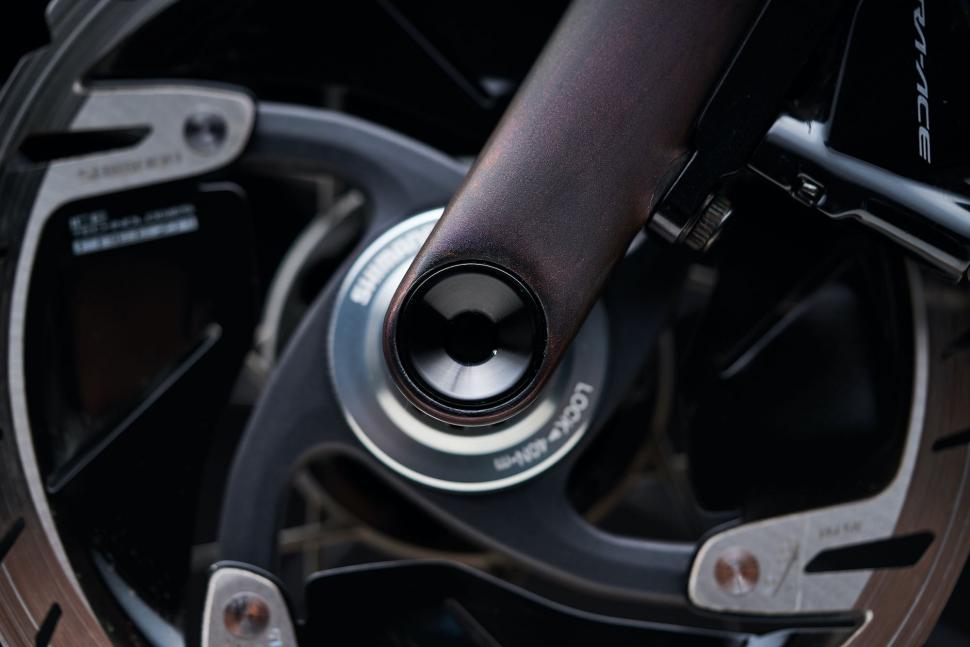 A 56cm S-Works Aethos has a painted frame weight of 588g in the lightest finish (Satin Carbon/Jetfuel), according to Specialized. Other finishes add 25-45g.

The complete claimed weight of the S-Works Di2 model is 6kg in the Carbon/Chameleon Red Gold colourway.

The weight varies according to frame size, of course. A 49cm frame in a Satin Carbon/Jetfuel colourway is said to average 550g while a 61cm frame averages 643g.

As mentioned above, the Founder's Edition comes in at a claimed 5.9kg.

The Aethos has fit/handling geometry that's identical to that of the Tarmac SL7 (the stack and reach are slightly different, but that’s because the SL7 has a cutaway at the top of the head tube and a tall bearing cover). 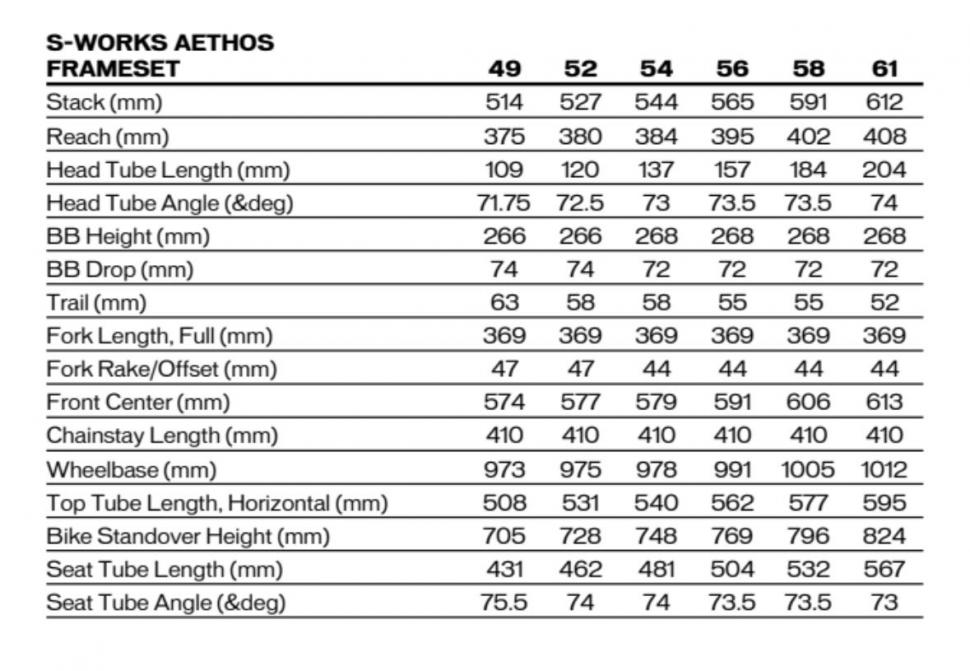 Get more details from www.specialized.com