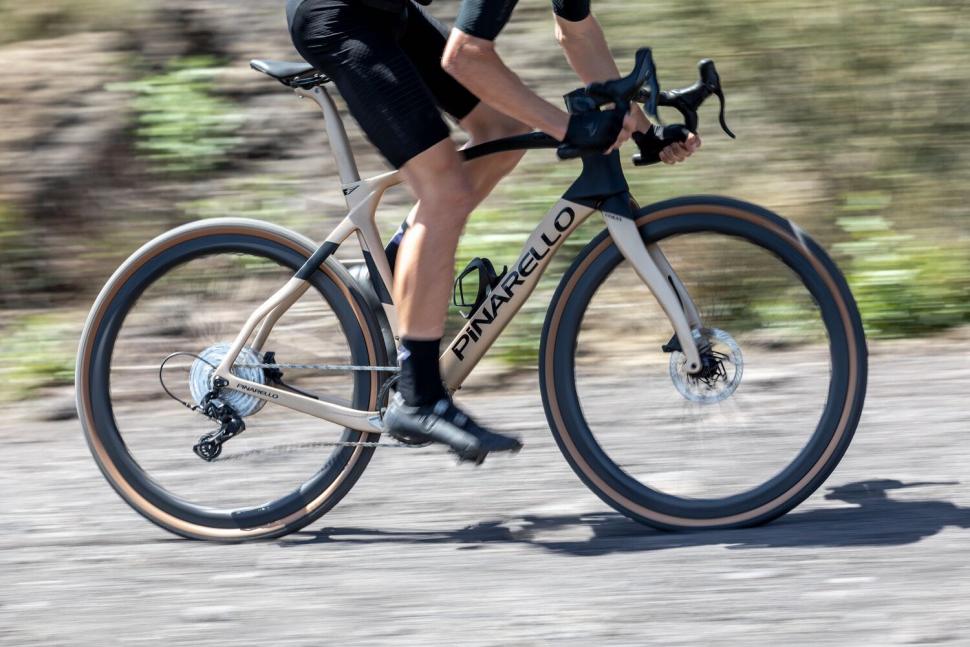 Pinarello has introduced a new Grevil F gravel bike range that, it claims, is stiffer and more aerodynamically efficient than the previous incarnation, with fully internal hoses and cables and an altered geometry. Like its predecessor, the Grevil F is focused on speed – Pinarello describes it as “a purebred race machine” and “a competition bike for all terrains and distances” – although it’s designed to be a little more versatile, with the ability to take larger tyres. 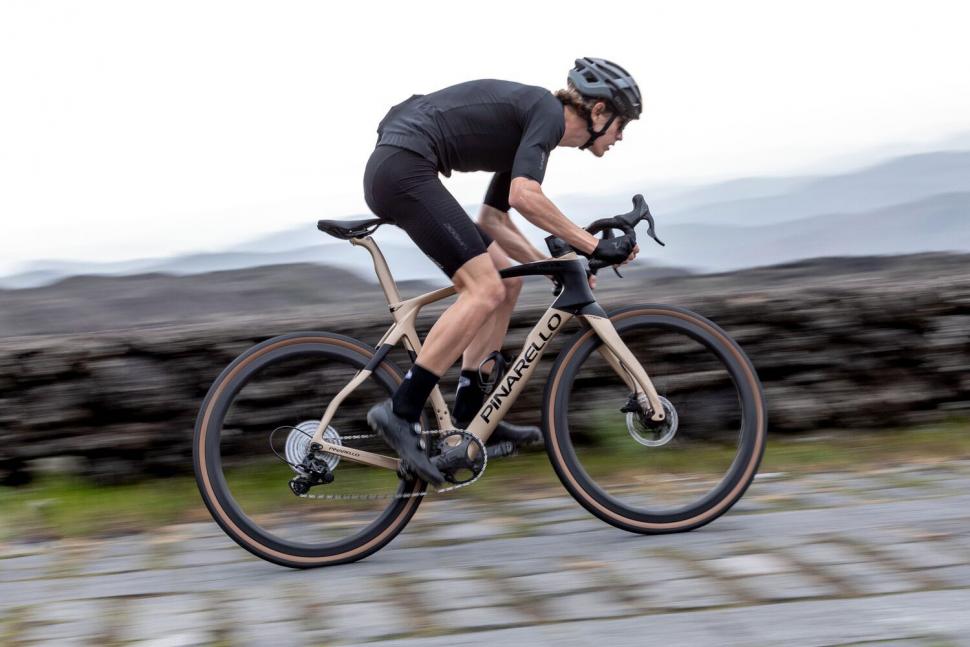 Pinarello says that the Grevil F is “4% more aerodynamic” than the first version released in 2018, saving the equivalent of 5 watts at 40km/h (25mph) – although it doesn’t give any more details on yaw angles tested or offer comparisons with bikes from other brands.

Whereas brake hoses and any cables were routed externally from the handlebar to the frame/fork on the first generation Grevil, Pinarello has introduced what it calls its TICR (Total Internal Cable Routing) system on the Grevil F, with everything plumbed through the head tube. 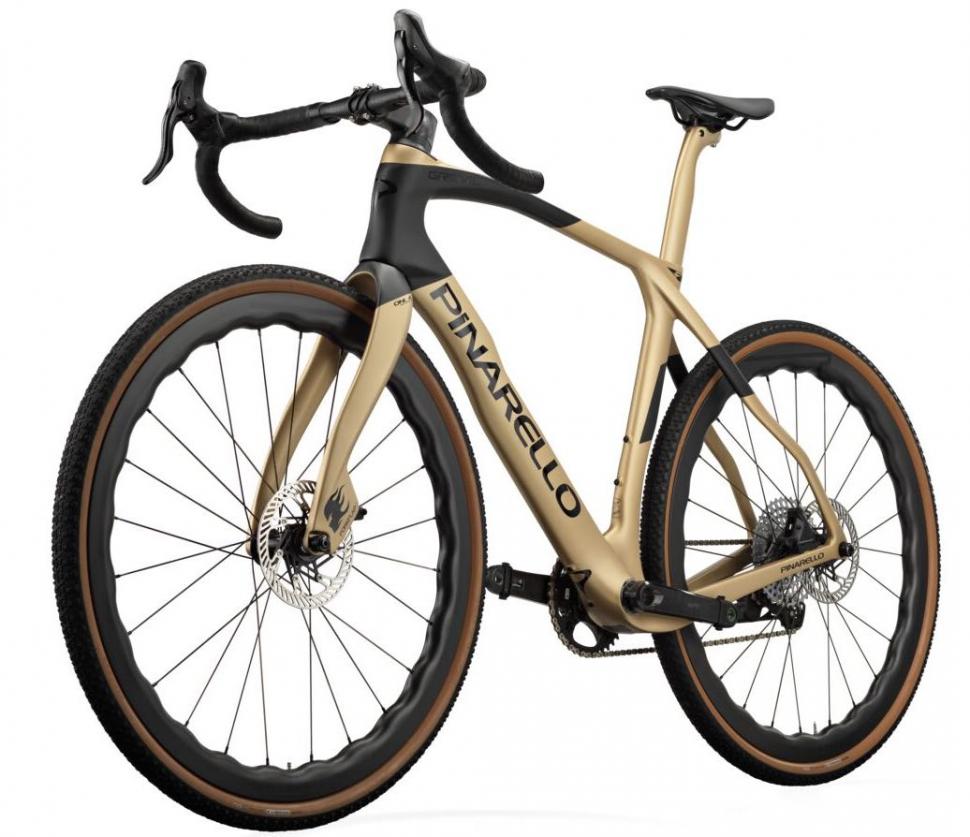 The system is compatible with all 1x and 2x groupsets except for 2x SRAM mechanical.

It says that the introduction of internal cable routing improves the bike’s aerodynamic profile. Having worked with Team Sky and Ineos for years, Pinarello is fully on board with the concept of aggregating marginal gains.

“Even a small aerodynamic gain multiplied by several hundred kilometres can lead to a great gain overall,” it says.

Read our review of the original Pinarello Grevil

Pinarello incorporated several features designed to reduce drag on that first Grevil, and the new model retains these.

The deep-section down tube, for instance, has a concave rear edge, designed to work aerodynamically with a water bottle in place. This is a feature that you’ll also see on Pinarello’s top-level Dogma F road bike. 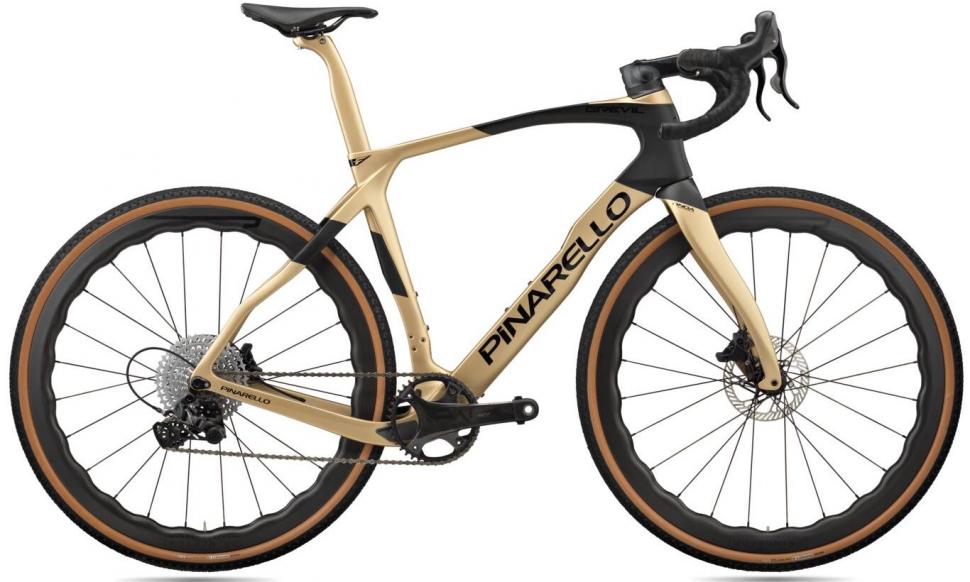 The Grevil F also features fork flaps – sections that extend backwards at the bottom of the fork legs – that are “designed to make the airflow steady and significantly decrease drag,” and an aero seatpost.

Pinarello has altered the Grevil’s geometry in several ways, steepening the seat tube angle (so it’s slightly closer to vertical) to allow for greater tyre clearance, for instance, and lengthening the head tube.

Not surprisingly, the Grevil’s reach is shorter than that of an equivalent road bike, and the stack is higher, but it’s still focused on speed/competition. 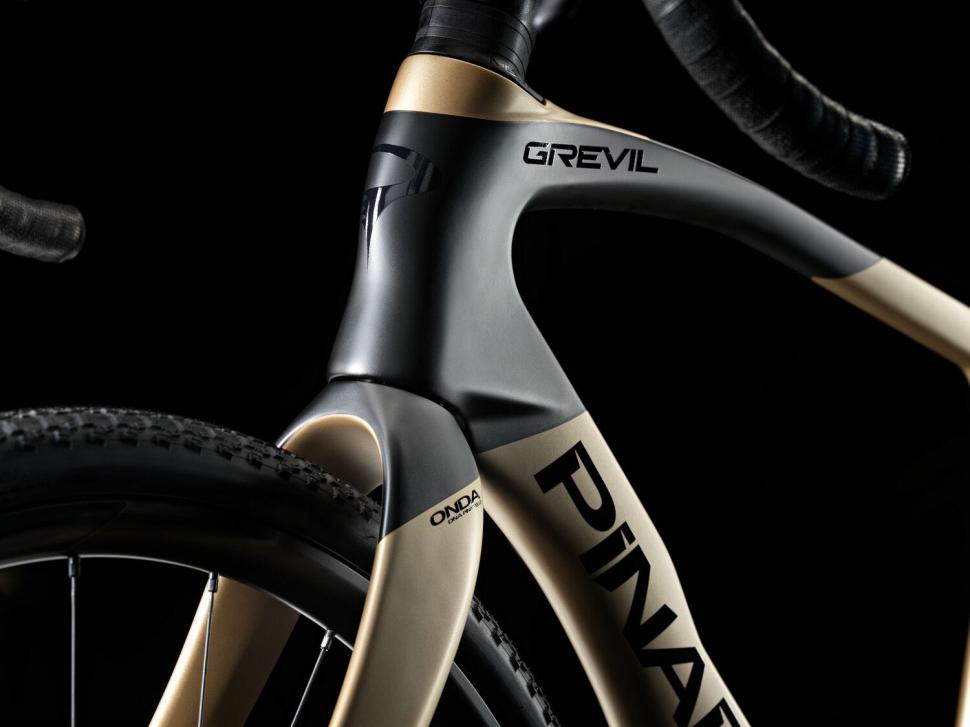 Pinarello says that this geometry allows you to flex your arms more, “better cushioning the impact of the terrain, and the shoulders can be more relaxed for long distances”.

The Grevil F is designed to have the same trail and handling characteristics across the range of sizes. Trail is the distance that the centre of the front tyre's contact patch with the ground trails behind the point where the bike's steering axis (the fork steerer tube) intersects with the ground. As a rule, more trail results in more stable steering and a greater ability to hold a line on rougher terrain. 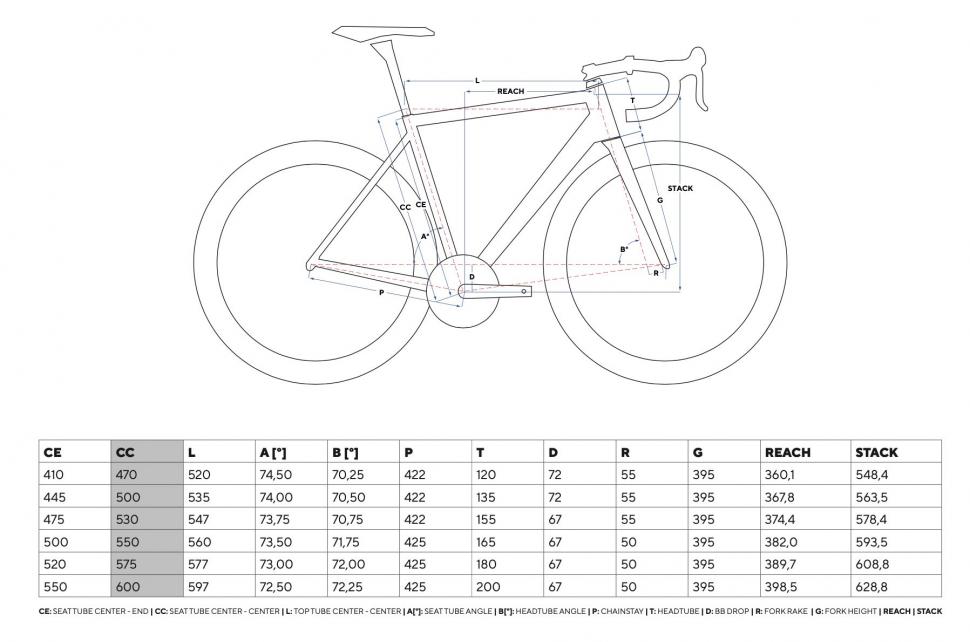 “By utilising a different rake and head tube angle, we are able to keep the same trail for all the sizes, from the smallest to largest size,” says Pinarello. “That means every size has its own dedicated geometry, with solutions required by only that specific size. Six sizes, six different ways to develop the geometry, one single goal: keep the trail and the handling quality the same for every size.”

The drive-side chainstay has been rotated downwards on the Grevil F.

“We wanted to keep the Q-factor (the lateral distance between the pedals) similar to a road bike without lengthening the chainstay so as not to affect the rideability,” says Pinarello.

“Therefore, it was necessary to move the chainstay downwards in order to free the critical intersection zone. This made it possible to guarantee a cross tube section of 14mm for chainstay, thus guaranteeing the optimal rigidity of the component.” 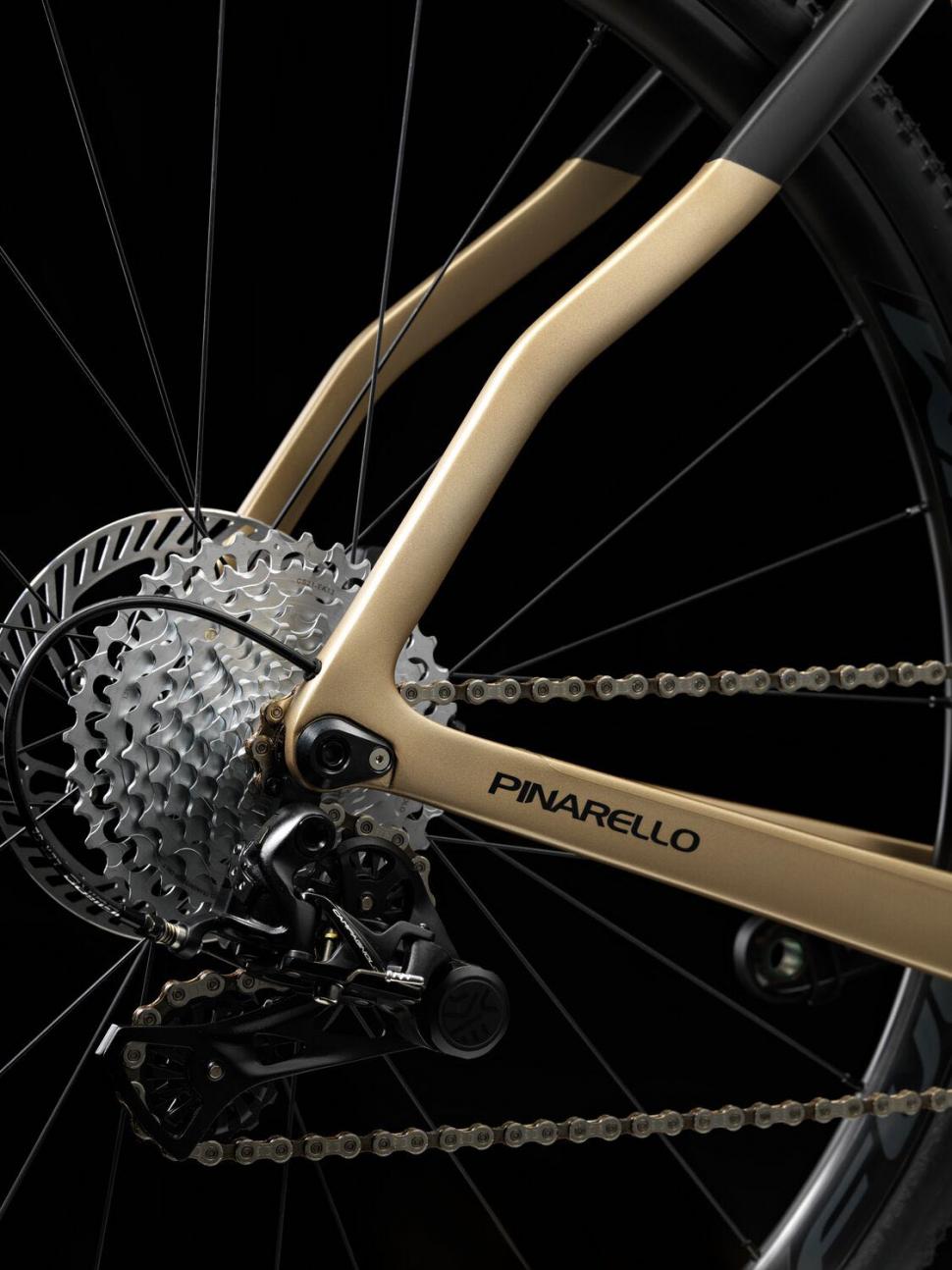 “Twin Arms technology already used in the previous Grevil project allows us to provide a downward rotation of the right seatstay in order to guarantee the same triangle geometry between left and right sides,” says Pinarello.

“Advantages of this include: the rear triangles have similar geometry and consequently they respond symmetrically to stress. Moreover, having two different connection points between seatstays and seat tube disperses and offloads the energy received through the rear axle. The result is the seat tube being able to absorb this energy in a more efficient way.”

As with other Pinarello, the down tube and bottom bracket are also asymmetric – they're offset towards the drive-side – designed to handle the different forces applied to either side of the frame as a result of the positioning of the drivetrain. 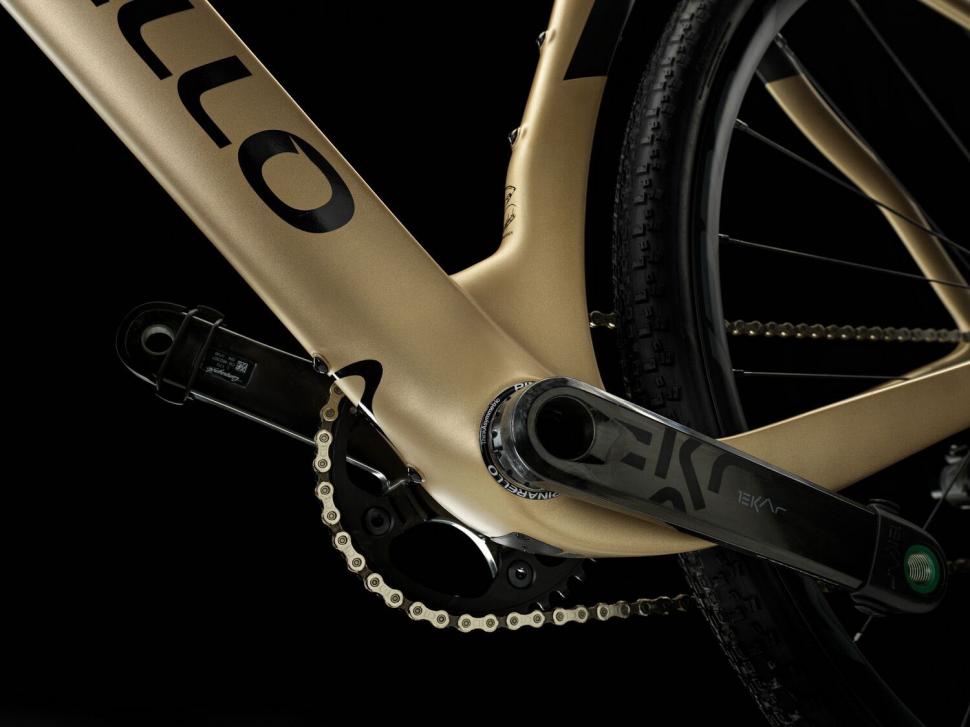 As previously, the Grevil F has mounting mounts on the underside of the down tube (as well as in the normal positions inside the main triangle) a removable front derailleur mount, and an Italian threaded bottom bracket. Speaking of the bottom bracket, Pinarello claims an 8% increase in stiffness in that area over the previous model.

Unlike the Pinarello Dogma road bike which has a seatpost clamp at the rear of the seat tube, the Grevil F has a dedicated clamp in front of the seatpost, sunk into the top tube, where mud and dust are less likely to be an issue. This is the same position as you’ll see on Pinarello’s Prince road bike. 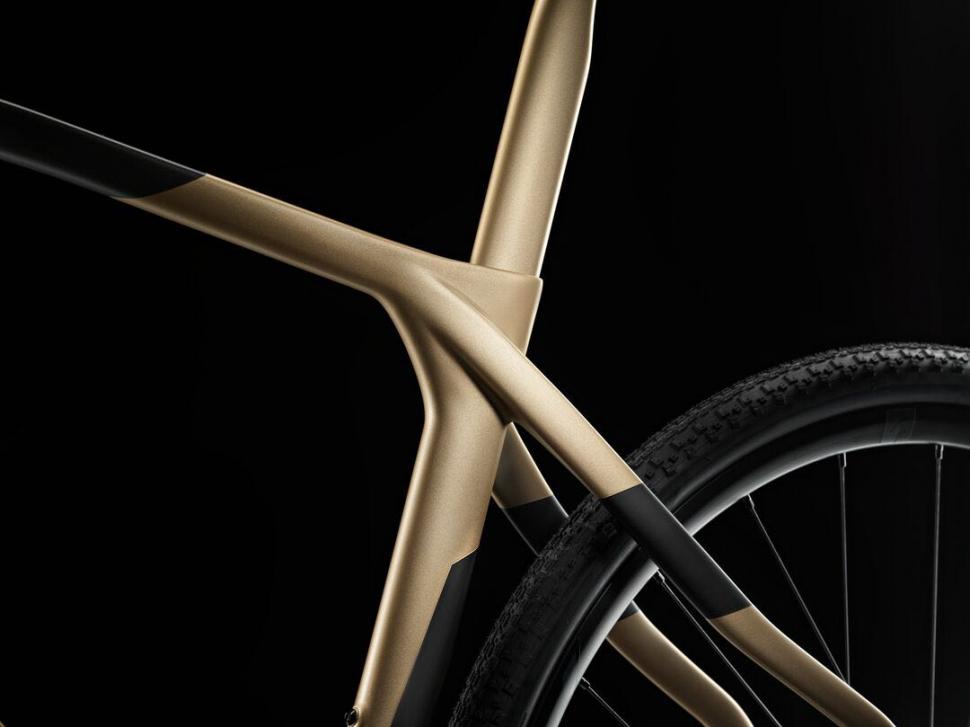 One thing the Grevil F doesn’t have is a multitude of mounts. Aside from the extra bottle cage mounts mentioned above, there's nothing for carrying extra loads. As Pinarello is keen to point out, this is a bike designed for speed rather than for overnight adventure.

In terms of materials, Pinarello says, “For the Grevil F, the perfect mix of different types of HM (high modulus) and HT (high tensile strength) fibre are used in different areas of the frame to achieve the ultimate balance of rigidity and vibration absorption.”
The Grevil F uses T700 carbon fibre from Toray. Unlike at the first launch in 2018, there’s no mention of a higher modulus Torayca T1100 Carbon 1K Dream Carbon model.

Although it has become more subtle in recent years, there’s still a distinct wave in the Onda fork found on the Dogma F road bike. The wave is less noticeable on the Grevil F’s Onda fork but it’s still visible. Pinarello claims that this helps with shock/vibration damping. 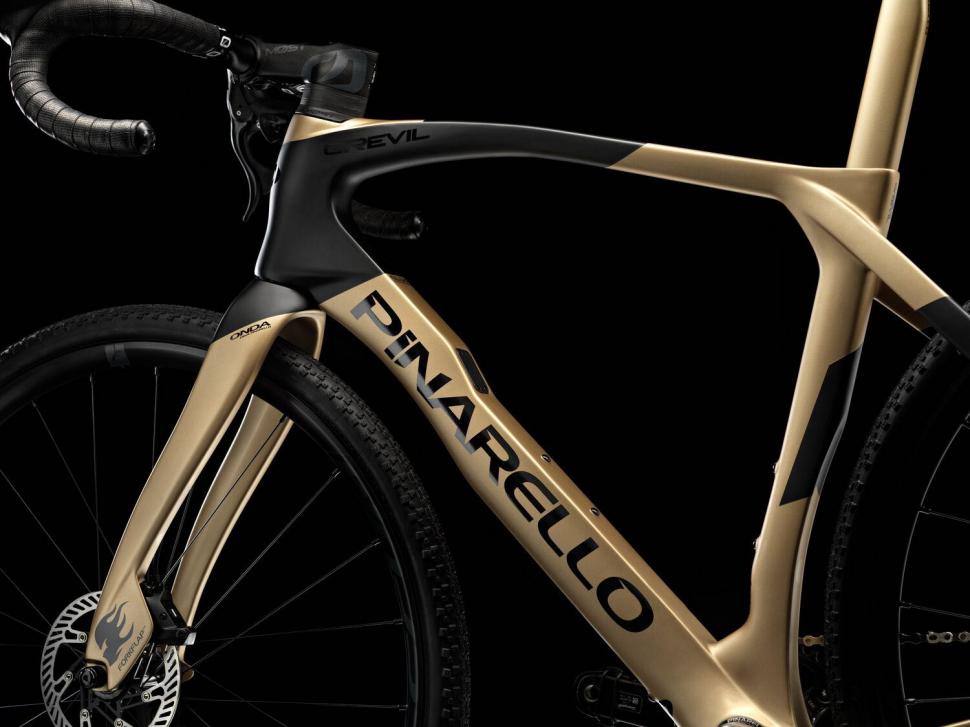 The fork rake (the amount the front hub is offset from the centre of the fork steerer) has also been increased from 50mm to 55mm on some sizes, “improving the bike stability in rough terrain”

“[The Onza fork] offers excellent vibration damping while still being extremely lightweight, and without the inevitable power losses that are caused by the insertion of shock-absorbing elements,” according to Pinarello.

Pinarello says that one of the main objectives of the Grevil F project was to increase versatility by making the frame compatible with a wide range of wheels and tyres. 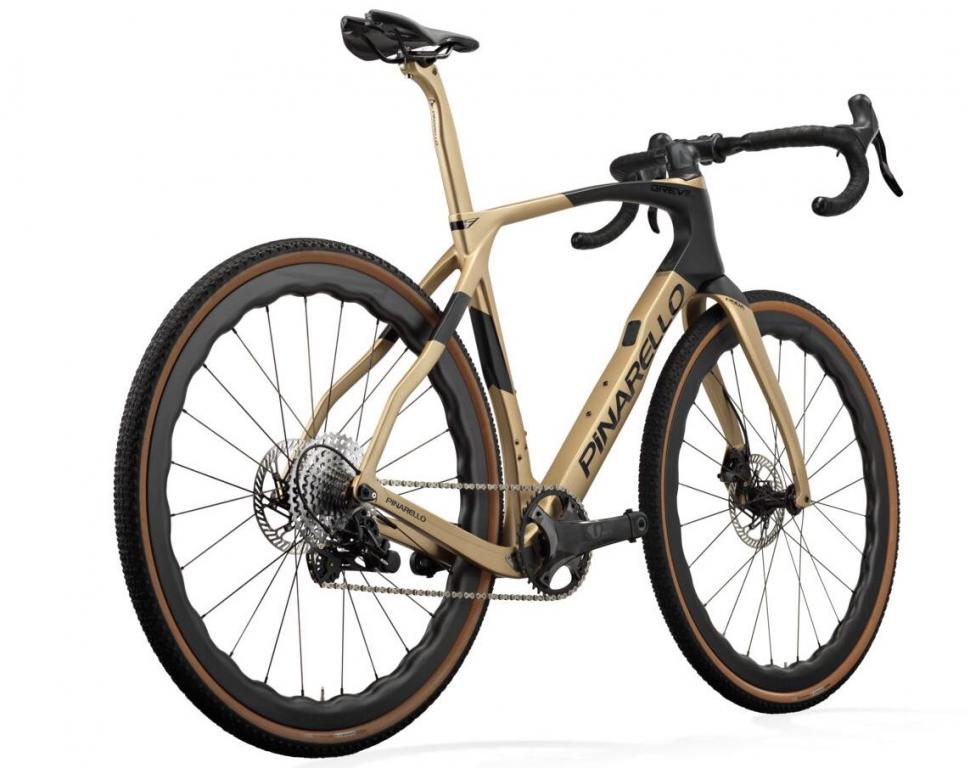 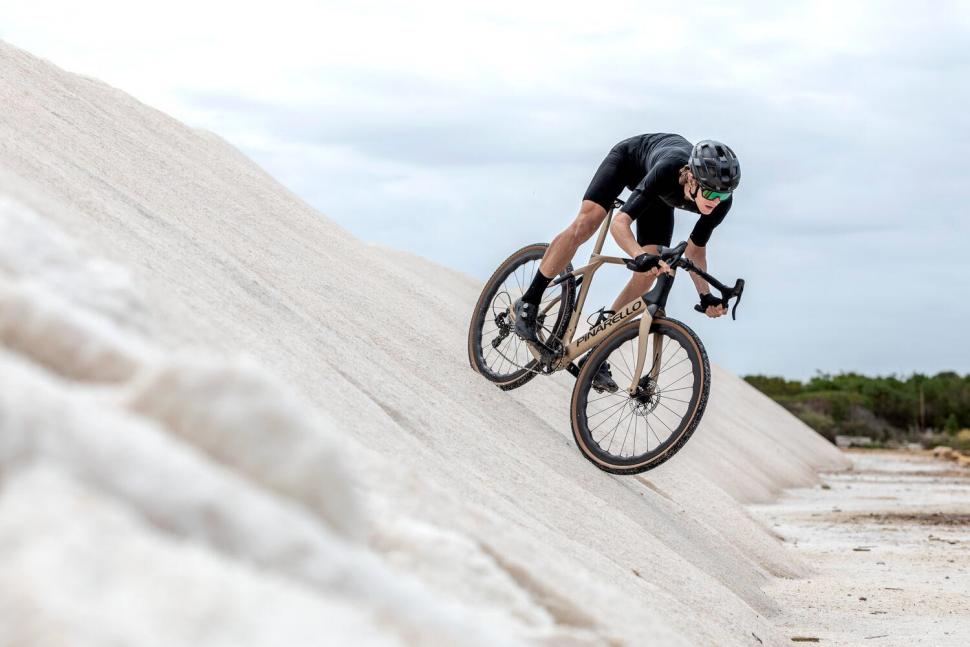 A complete Grevil F bike (size 53, no pedals), built up with a Campagnolo Ekar gravel-specific groupset and Princeton Grit 4540 wheels, is a claimed 8.55kg

The same bike with Fulcrum Rapid Red 500 wheels is a claimed 8.85kg.

At present, all we know is that the price of the Grevil F with a Campagnolo Ekar groupset will cost £5,300 and that bikes will be available from today.