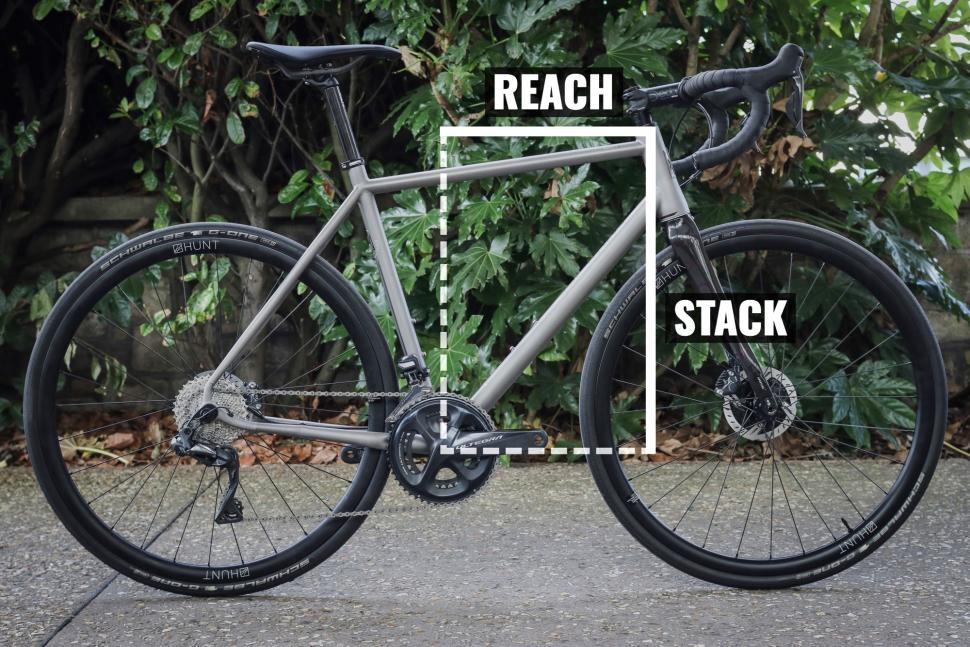 Stack and reach are terms that get bandied around all the time in the bike world, but what exactly do they mean and why are they useful to know?

Back in ye olde dayes comparing bike geometries was a matter of looking at tube lengths and angles and doing a bit of arithmetic, but then stack and reach came along – initially pushed by Canadian bike brand Cervélo and soon taken up by everyone else – and made things a whole lot easier.

Here's what we're talking about...

Stack The vertical distance from the centre of the bottom bracket to the central point at the top of the head tube.

Reach The horizontal distance from the centre of the bottom bracket to the central point at the top of the head tube.

So stack and reach, expressed in either millimetres or centimetres, are measurements between the same two points, one being the vertical component and the other being the horizontal component. Simple enough, right?

Stack and reach don't tell you everything you need to know about a bike's geometry but they're a useful start. These figures allow you to assess quickly whether a bike is likely to offer the ride position you're after before you dig deeper (we're not covering how to determine the best stack and reach figures for you here; we'd suggest you get a professional bike fit for that).

Why are stack and reach important?

You know how shoes and jeans vary in size between manufacturers? It's the same with bikes. A 56cm bike from one brand might fit you perfectly while a 56cm bike from another might feel way too small.

A frame size used to refer to the length of the seat tube (and it still does in some cases) but it gives you no more information on the ride position you're likely to get. Then sloping top tubes came in and complicated matters further by shortening seat tubes, and there's the massive variation in top tube and head tube lengths between different models to consider... A 54cm Cannondale SystemSix race bike has a very different fit from a 54cm Cannondale Synapse endurance bike, for example.

For all these reasons, it's impossible to look at any particular frame tube length and get a good idea of fit. 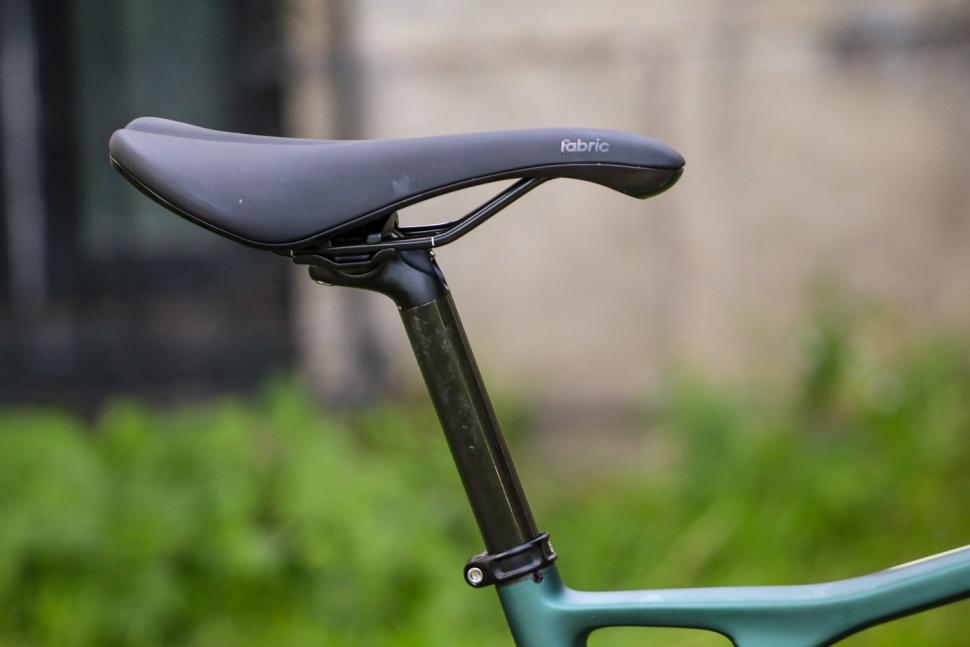 Of course, a lot of other factors influence your riding position: seatpost extension and layback, the position of the saddle on its clamp, the size and number of headset spacers you use, the length and angle of the stem, handlebar width, reach and drop... All of these can all be altered by either adjusting an existing component or swapping to a new one.

A frame's stack and reach, though, can't be changed (although, admittedly, Argon 18 uses what it calls a 3D System on some of its bikes to allow you to adjust the height of the head tube) and they're very important in determining your ride position. These figures refer to the frame only, leaving components out of the equation.

For a given reach, a greater stack puts you into a more upright riding position; your hands will be moved upwards and your body position will rise more towards the vertical.

If the stack remains the same and the reach is increased you'll get a longer ride position; your hands will move forwards and you'll be more stretched out. 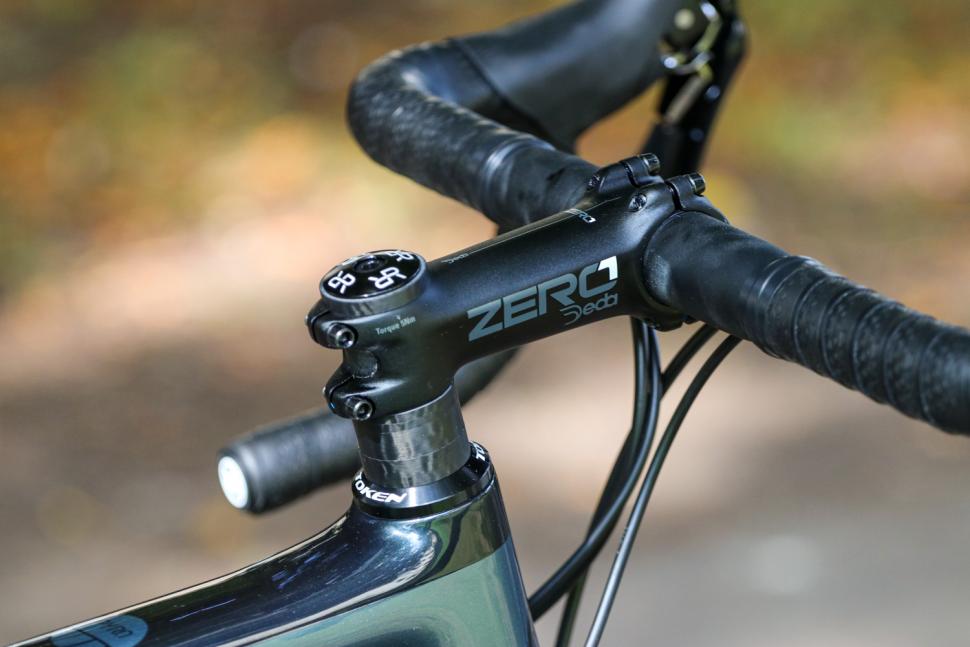 You can fine-tune your ride position by adding or removing headset spacers, swapping your stem, and so on, but only by so much, which is why stack and reach are so important to a bike's character.

Say that it's time for a new bike. If you're happy with the ride position of your current bike, comparing stack and reach allows you to determine whether you're likely to be able to get a similar position on any new model.

On the other hand, if you find your current position a little too aggressive – you feel that your body position is too low and/or too stretched – you might want to consider a model with a shorter reach and/or a higher stack. 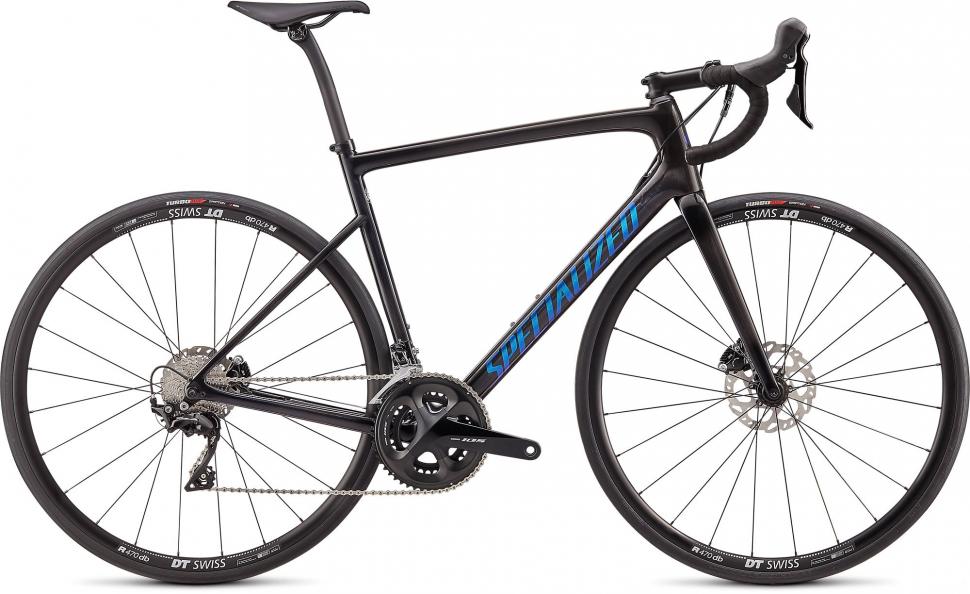 Let's look at a couple of examples. Take Specialized's Tarmac road race bike, for instance. The 56cm model has a stack of 565mm and a reach of 395mm.

Those figures might not mean much to you in isolation but they allow you to compare the Tarmac with other bikes. 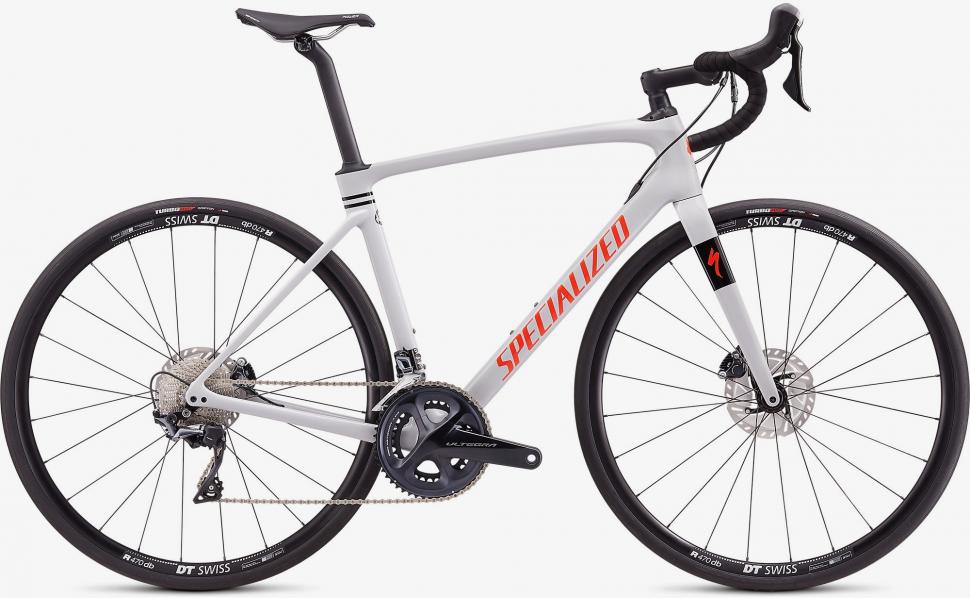 The 56cm version of Specialized's Roubaix, which is an endurance road bike designed with a focus on comfort, has a stack height of 605mm and a reach of 384mm.

In other words, the top of the head tube is considerably higher and a little closer to the saddle on the Roubaix than on the Tarmac. All other things being equal, your ride position is going to be much more upright on the Roubaix. That's good news if you want to put less strain on your back and neck for long-ride comfort, but bad news if you want to keep drag to an absolute minimum. Horses for courses. 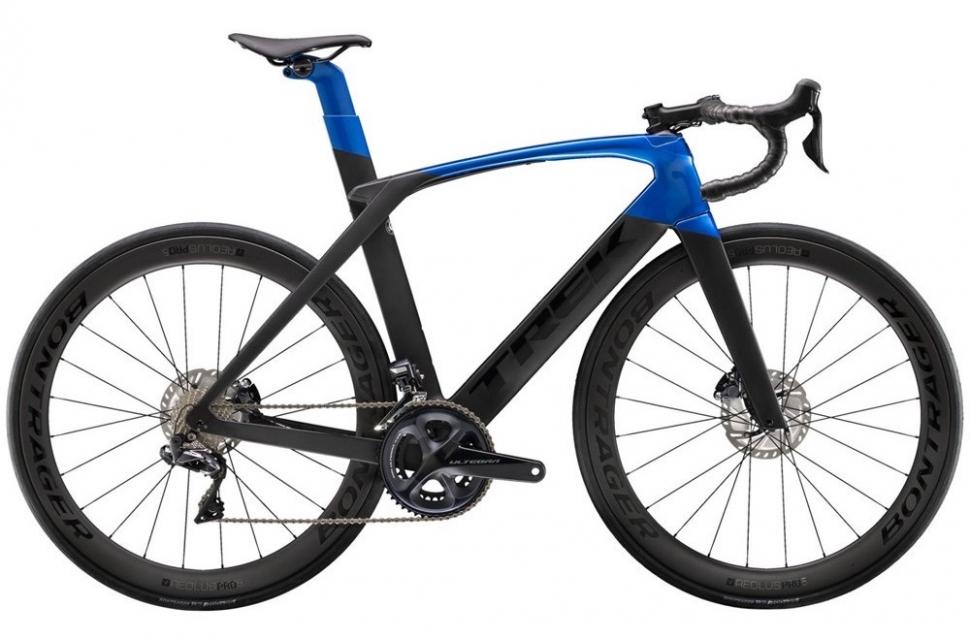 Over at Trek the 56cm Madone has a 563mm stack and 391mm reach while the equivalent Domane has figures of 591mm and 377mm respectively. 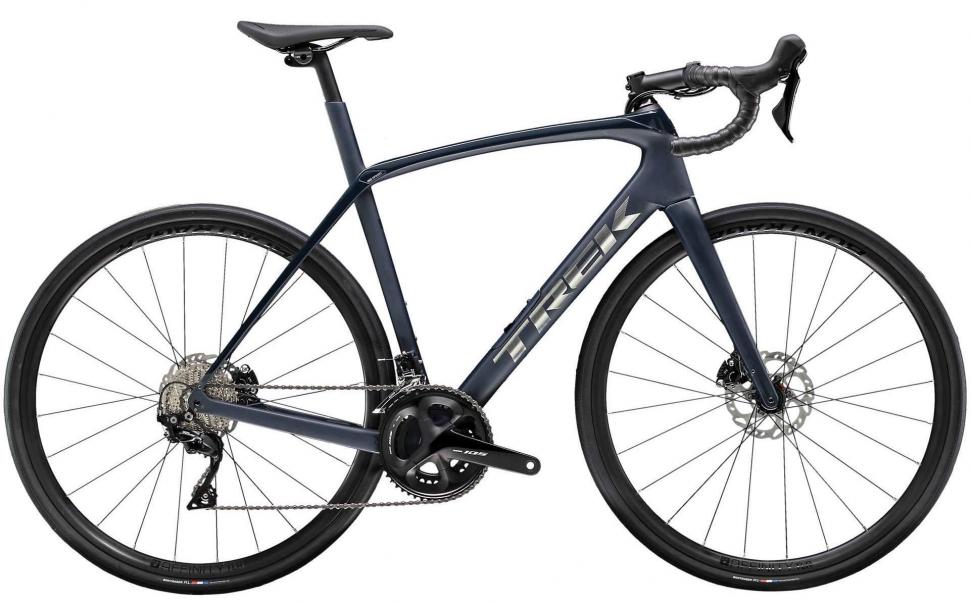 It's easy to see that the Madone is the more aggressive of the two in that it's longer and lower (and the seat angle is the same; see below why that can make a difference). Whether it's the better choice depends on your dimensions, flexibility, the riding you do and a whole bunch of other considerations.

Limitations of stack and reach

As mentioned, stack and reach don't give you everything you need to know about a bike's geometry; they don't tell the whole story by any means. Importantly in terms of fit, they don't take into account a bike's seat angle, for example. Two bikes might have exactly the same stack and reach figures but if one has a slacker seat angle the distance from the saddle to the handlebar will be slightly greater, all other things being equal. 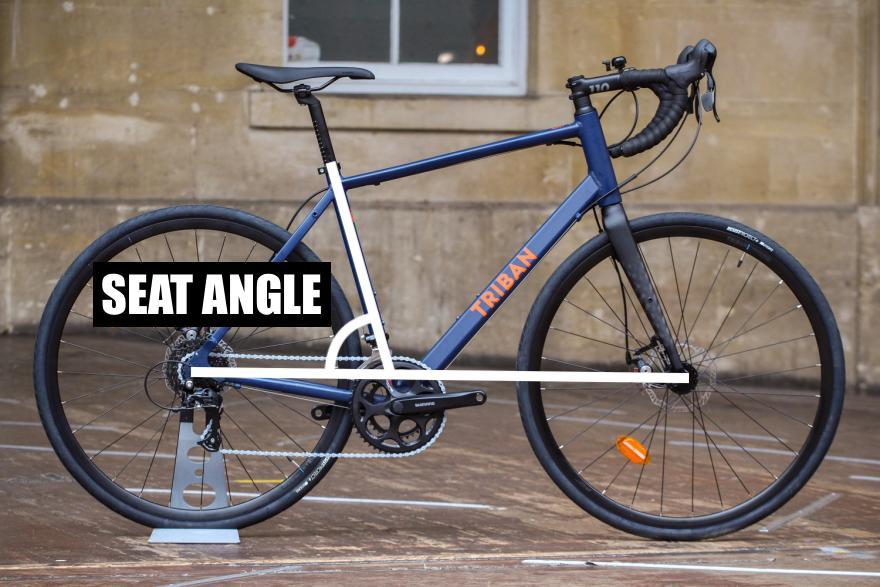 Stack and reach don't take into account the headset system (external, integrated, etc) used; some add more height to the front end than others (and bring the front end slightly closer to the saddle in the process). You need to factor this in when comparing different bikes.

Plus, all of those equipment choices mentioned above (seatpost layback, stem length, headset spacers, handlebar type and so on) have a massive effect on a bike's fit and handling.

There are a million and one other aspects of bike geometry that stack and reach don't tell you about, but these figures are still a useful start point for comparing different bikes and deciding whether a particular model is right for you.

Some bike brands give additional information about handlebar position. Canyon, for example, has introduced what it calls stack+ and reach+ measurements which are not the same as stack and reach.

Here's the explanation from Daniel Heyder, one of the product engineers behind Canyon's Grail CF bike:

Stack+ describes the vertical distance between the bottom bracket and the contact point on the TOP of the handlebar tops .

Reach+ describes the horizontal distance from the bottom bracket to the CENTRE of the handlebar tops.