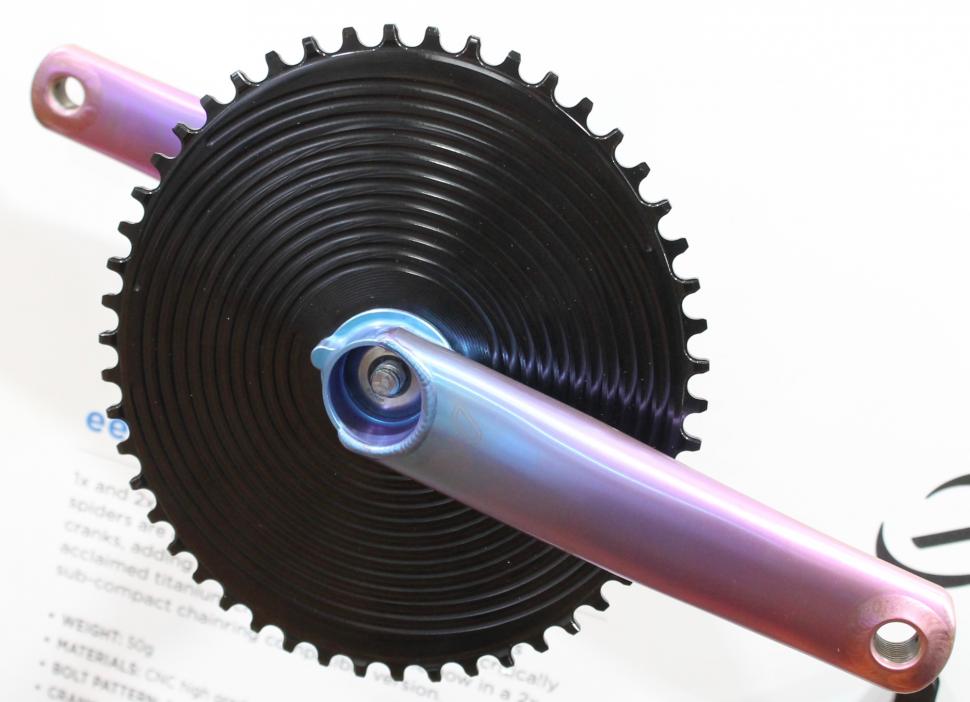 We spent yesterday at the Corebike cycle trade show checking out what we should be reviewing over the coming weeks and months, and here are some of the most eye-catching new products we spotted...

Tie dye is back – we heard it from some fashionistas – and Cane Creek is getting in on the act by offering both mountain bike and all road versions its eeWings titanium crankset in what it calls a tie dye limited edition. It's an anodised finish. 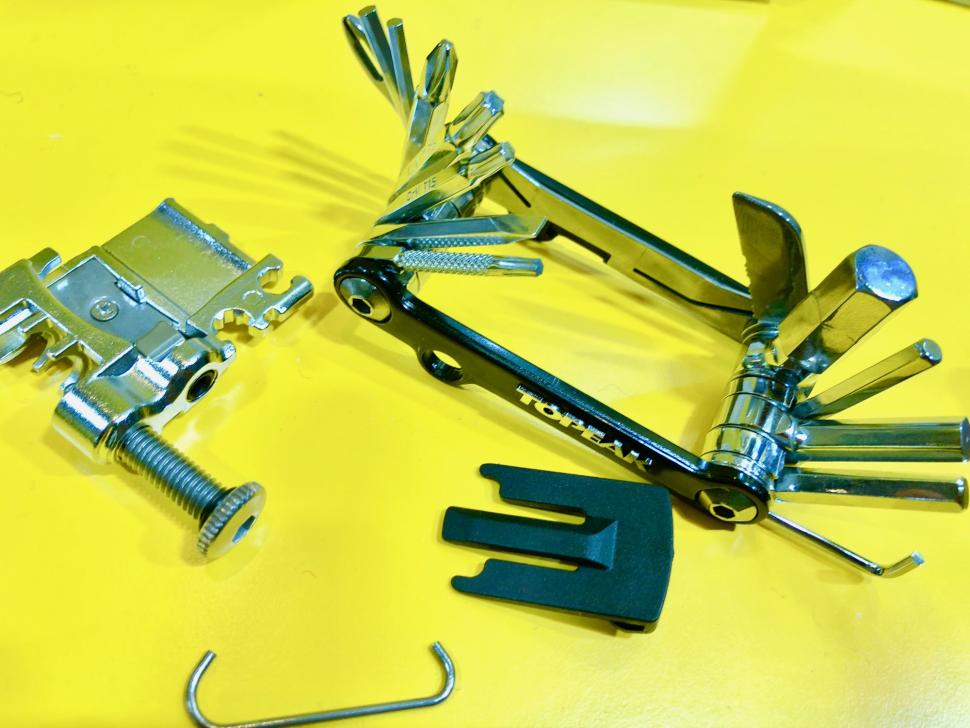 Topeak has been busy updating its multitool range, a sign of the times being the addition of a tubeless-specific Mini PT30 (£39.99; the 'T' denotes tubeless, by the way). In a first for Topeak, it includes a tubeless tyre reamer and a tubeless plug insertion tool. There's also a serrated knife for cutting off the end of the plug once inserted.

You're wondering what the P stands for now? It's Powerlink. Like the PT30 (above), the Mini P20 (£32.99) features a chain tool that can force seized SRAM Powerlinks apart. The Roadie TT Mini (£29.99) is a full-metal pump that inflates on the pull stroke as well as on the push stroke. It comes with a thumb lock lever and is available in both black and silver finishes. 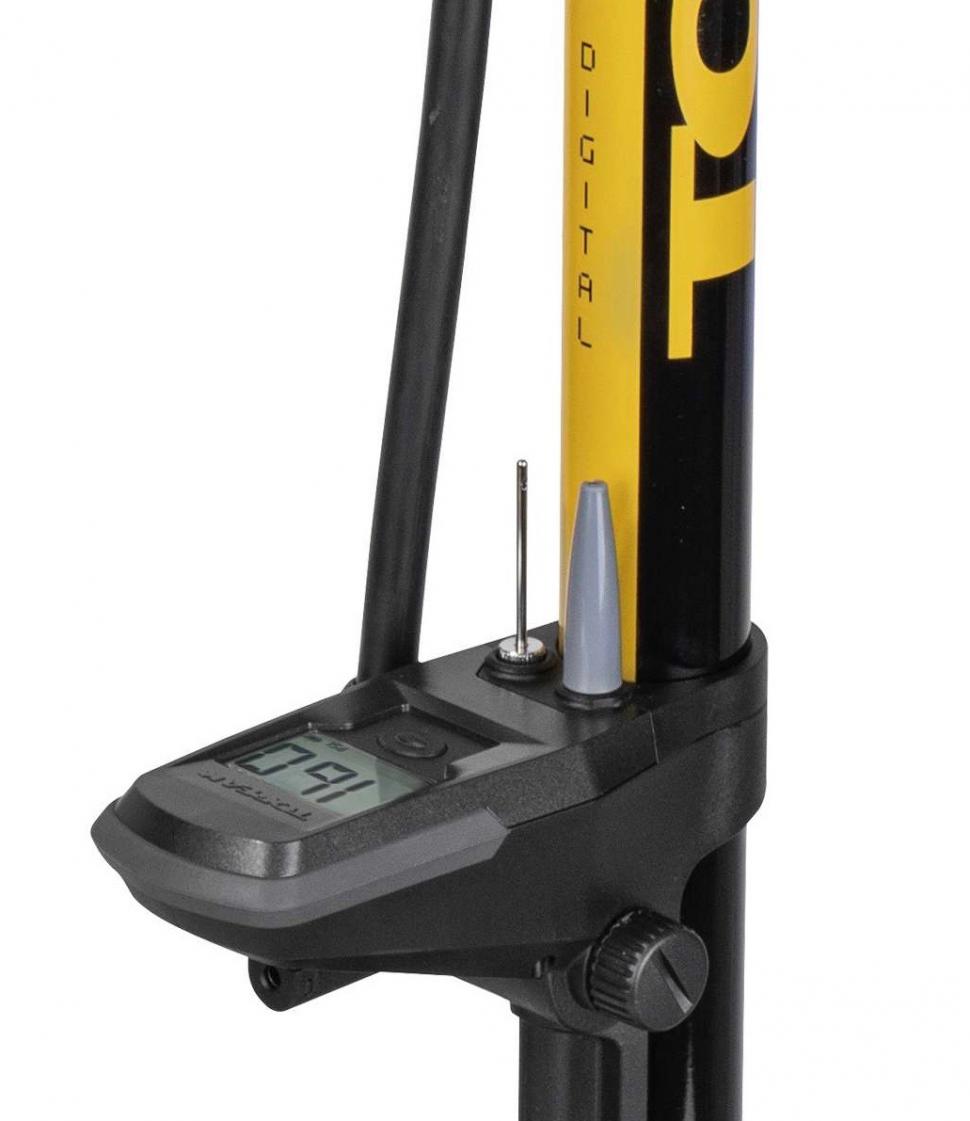 A couple of Topeak's floor pumps are now available with digital gauges (which is something that was first introduced a few years ago, then went away, and now it's back), although this does jack the price up. The JoeBlow Sport III is £39.99, for example, while the JoeBlow Sport Digital is £69.99. 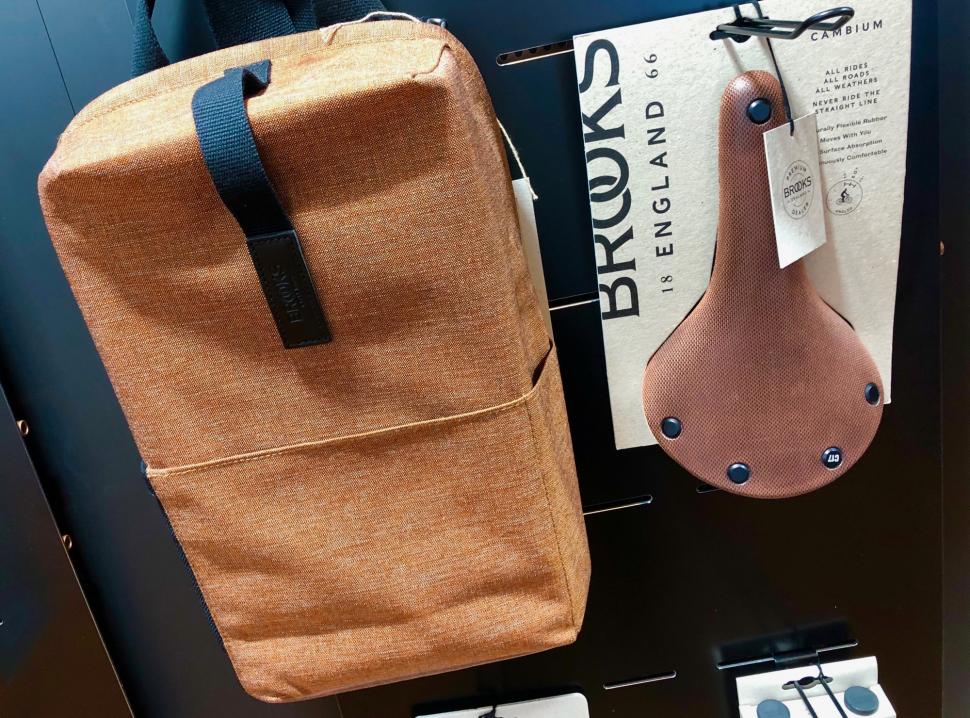 Brooks is introducing a couple of new colours for various components and accessories, available only through Brooks Premium Dealers. These are burnt orange (above) and octane (below). 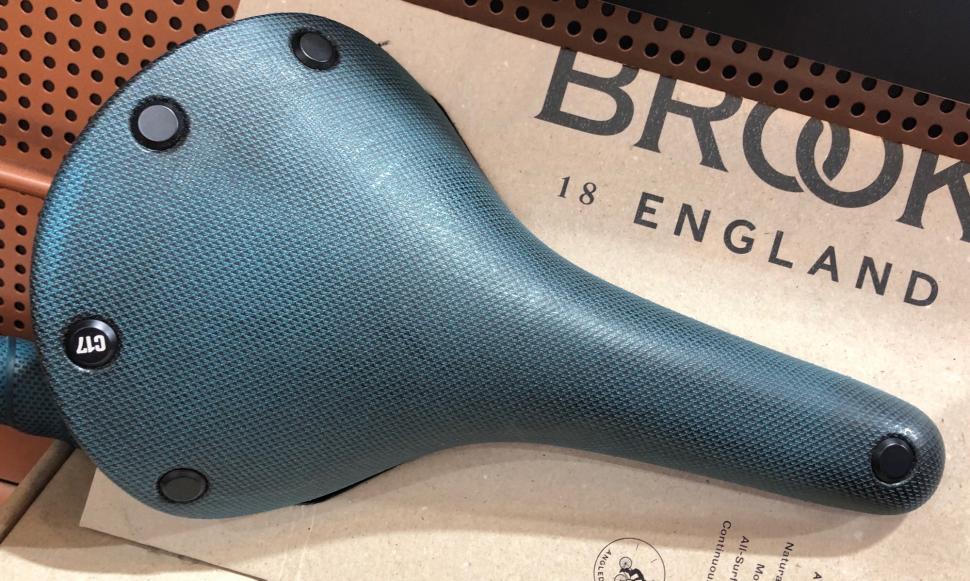 This B17 Special leather saddle (below, £120) features copper rivets and is also available only through Brooks Premium Dealers. 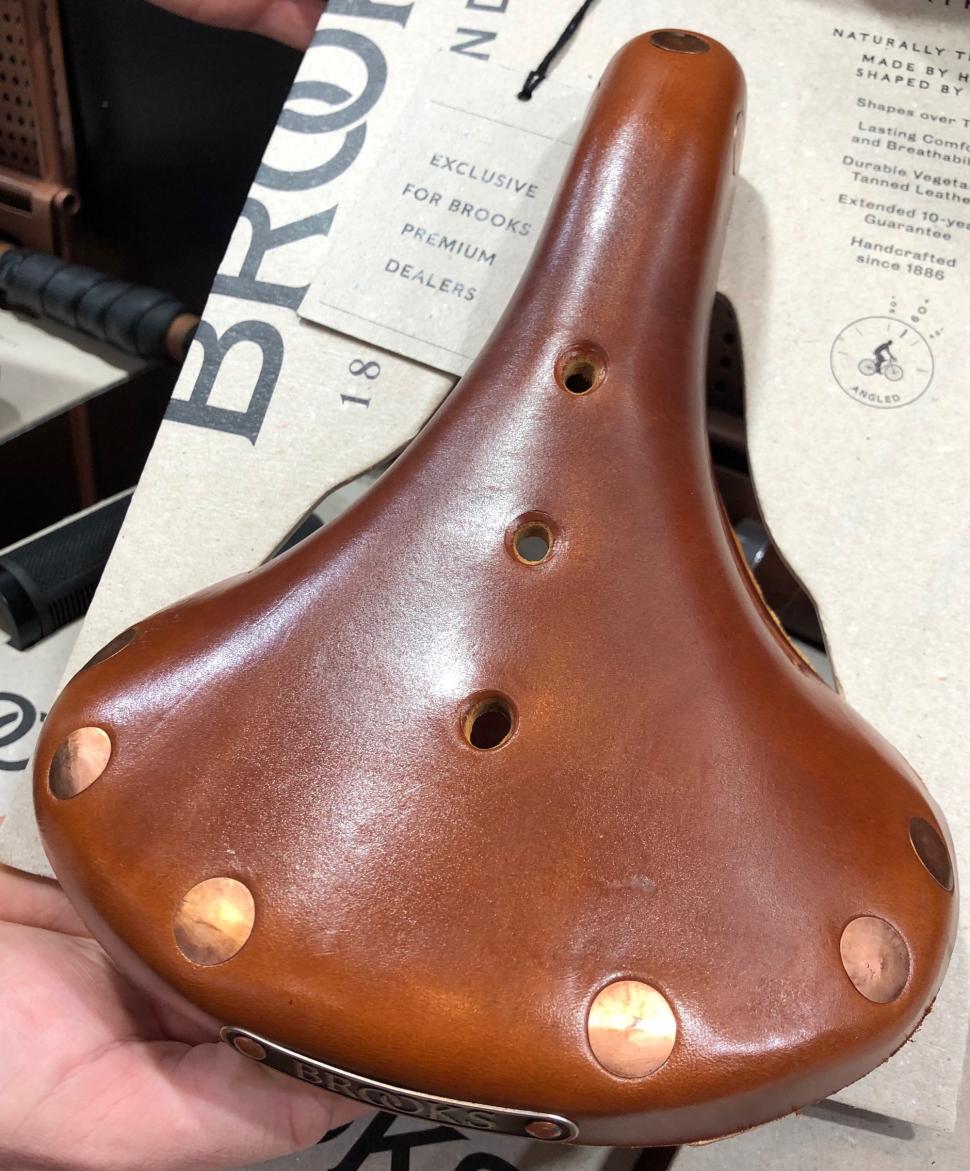 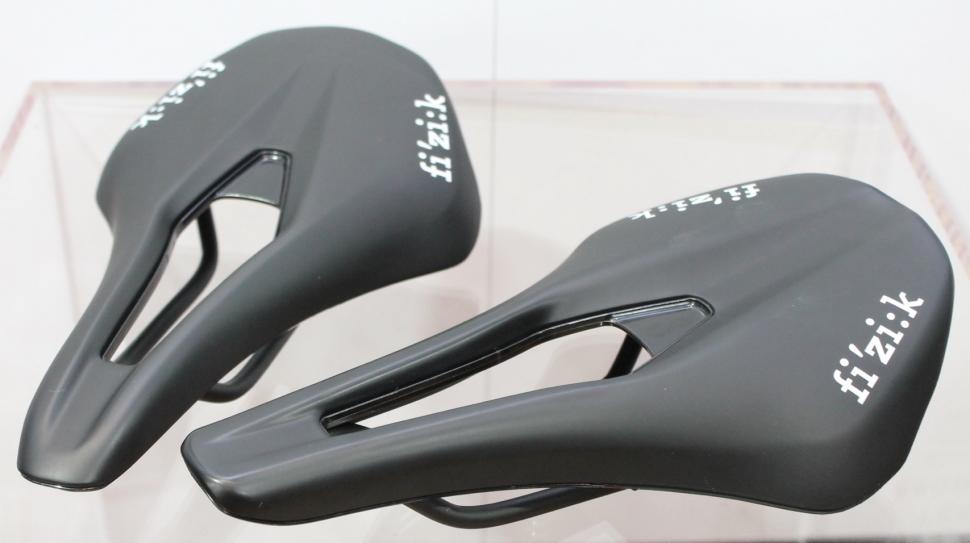 Now the Italian brand is introducing R5 versions of each. Whereas the R1 saddles come with carbon-fibre rails and the R3s have Fizik's Kium hollow rails, the R5 models feature steel rails to keep the cost down, although prices have yet to be confirmed (the R3s, for reference, are £129.99 to £134.99). 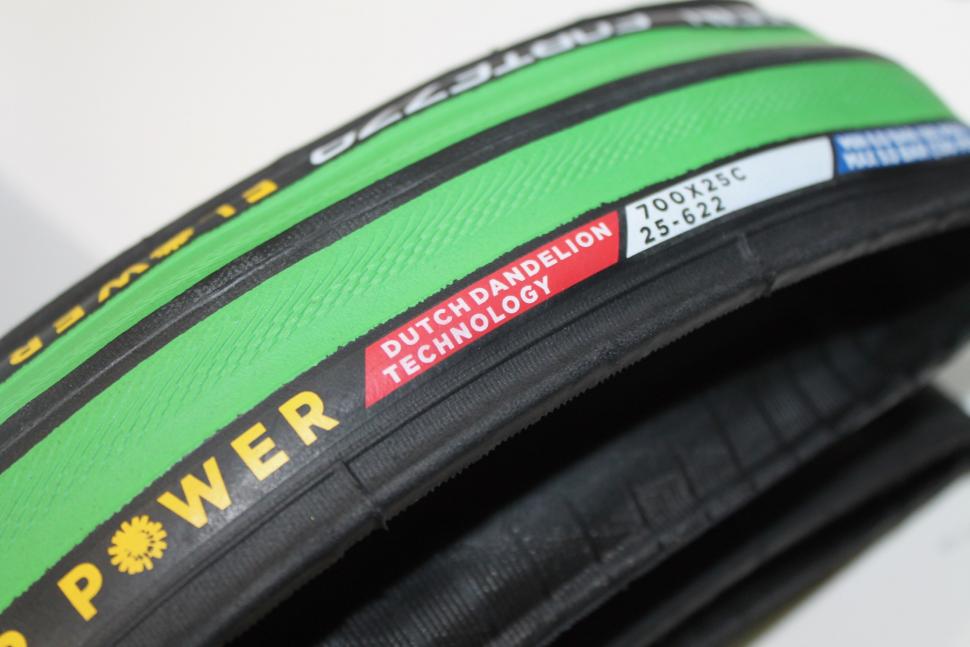 You know that dandelion rubber is a thing, right? Continental announced last year that it would use rubber derived from the roots of Russian dandelion in a small number of tyres but Dutch brand Vredestein was the first. Vredestein first showed its tyres at Eurobike 2017, but it's only now that it has been able to produce a limited number to be sold. The Vredestein Fortezza Flower Power tyres will soon be available in the UK

Russian dandelion is a species, by the way, as opposed to dandelion that has been imported from Russia.

Vredestein, working with Wageningen University and Research (WUR), says that the compound used provides better grip than traditional compounds thanks to a higher concentration of natural resin, along with lower rolling resistance. Plus, Russian dandelion can be grown easily and quickly in Europe (it can be harvested five times per year), making the EU less dependent on the importation of natural rubber.

Get more details on the technology here.

The dandelion rubber is used only for the shoulders of the Vredestein Fortezza Flower Power tyres; although green on this prototype, they'll be black on production models.

The tyres are top of the range and a limited edition, hence a price of £130 per pair (to be confirmed). 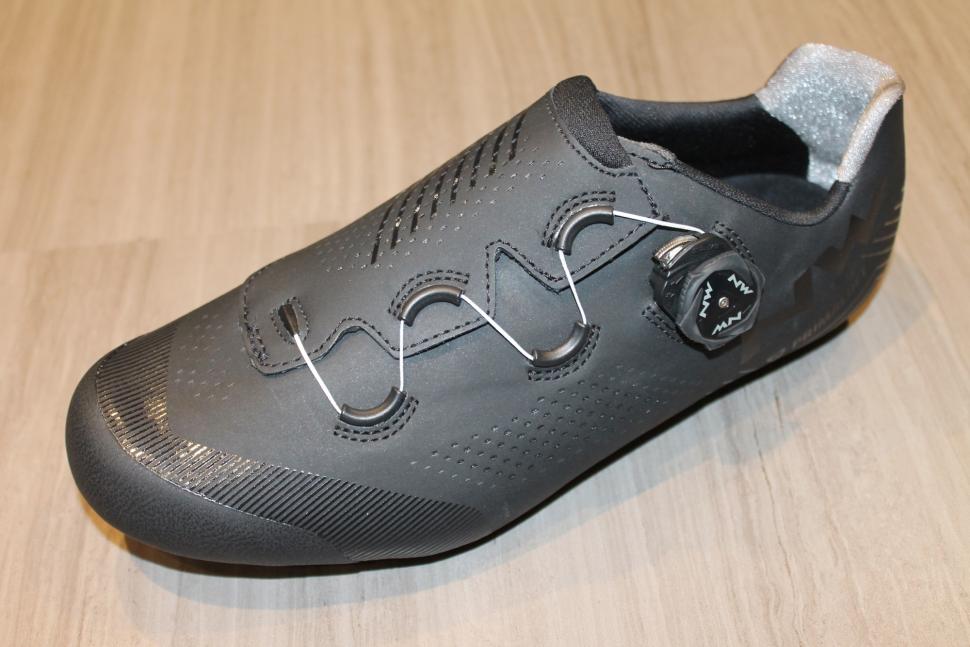 Italy's Northwave is adding Primaloft to its shoes lineup for autumn/winter 2020. The Magma Rock road shoe and Magma XC Rock mountain bike shoe, available from August onwards, will both get the insulation. Northwave will still offer its full range of winter riding shoes, of course; these ones are aimed more at winter and spring use. 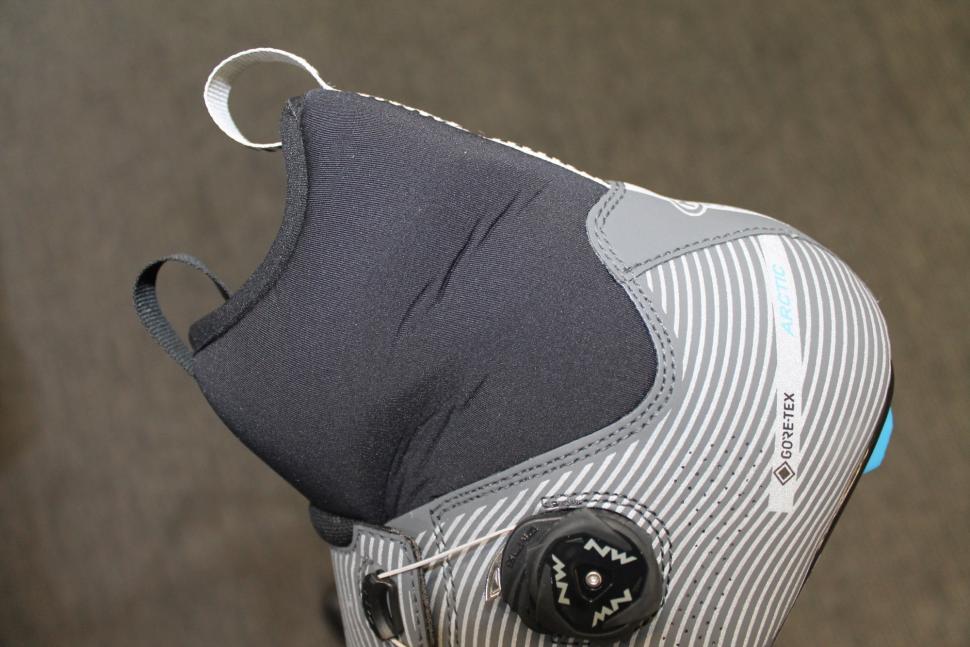 Speaking of the winter shoes, Northwave is adding an extra loop at the top of the neoprene section to make these easier to get on. This addition will be made for autumn/winter 2020 too. 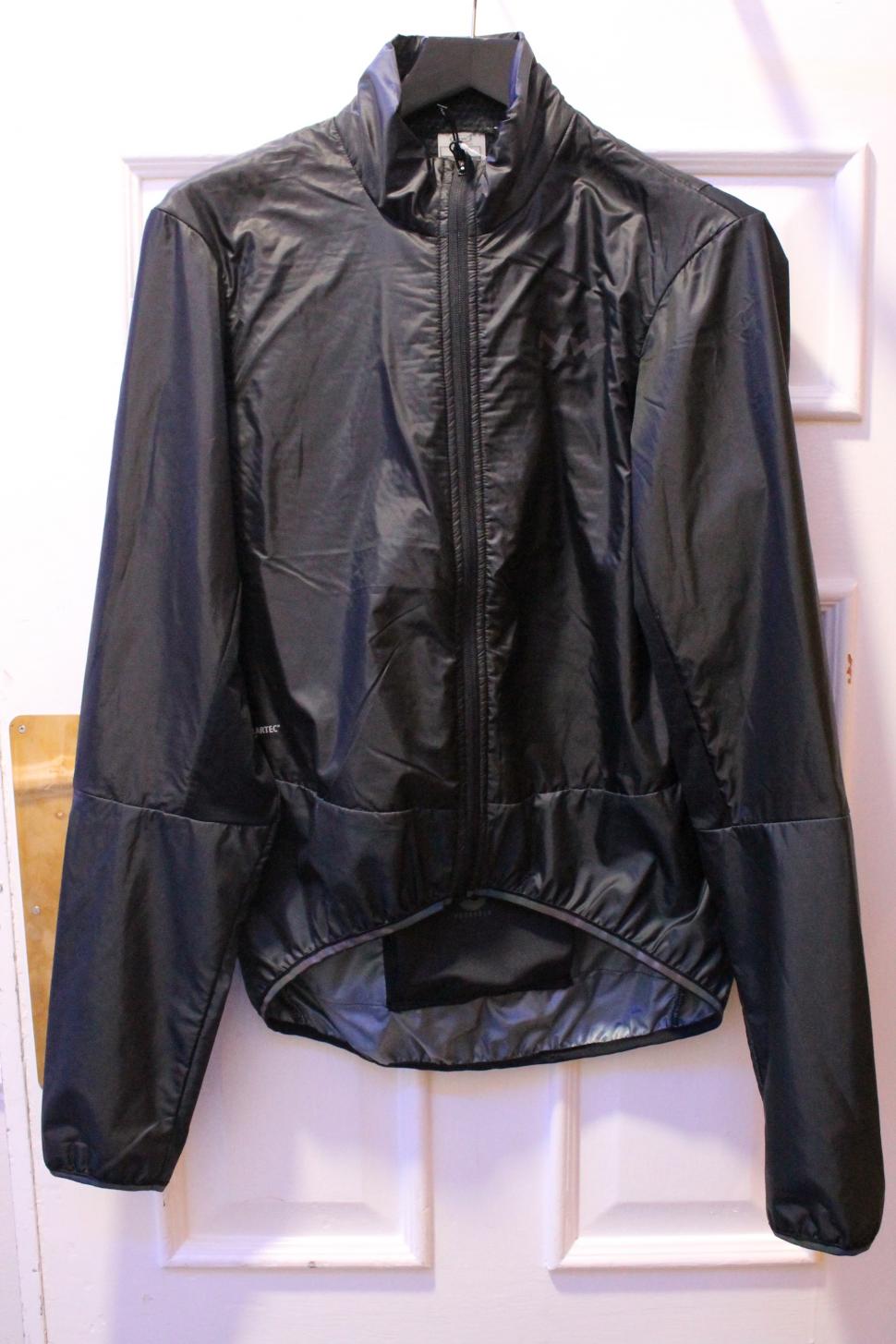 Northwave's Extreme Polar jacket is interesting too (again, this is an autumn/winter 2020 product; apologies that the picture's not great). It uses Polartec Alpha fabric (as found on the dhb Aeron LAB All Winter Polartec jacket, for example) which we know from experience to be incredibly warm considering its low bulk. It feels so light and wafty that it shouldn't keep you comfortable in cold weather, but it works beautifully. The jacket comes with reflective details and can be packed into its own pocket. 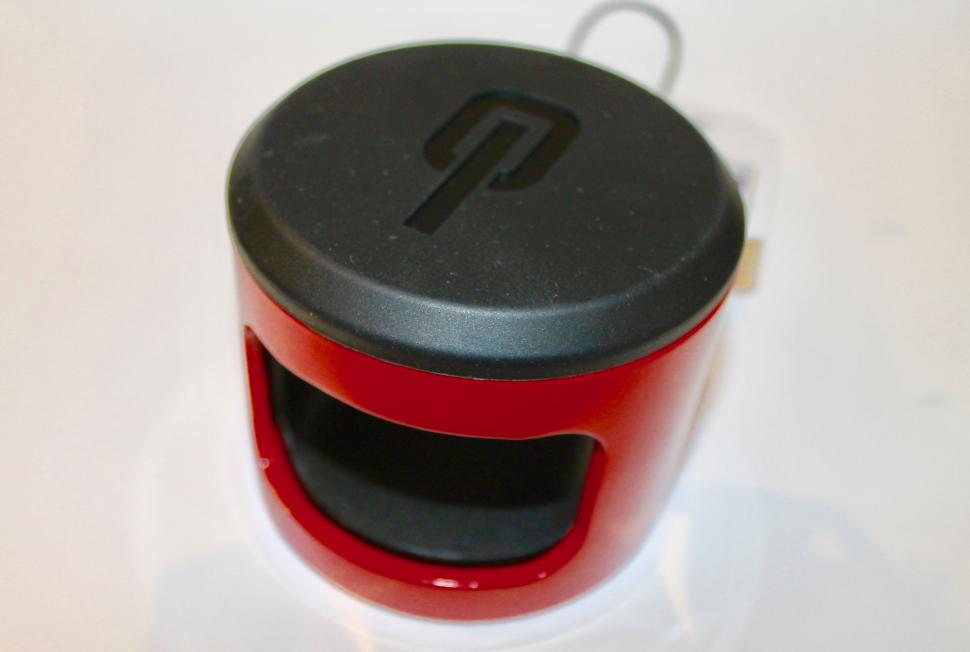 British brand Hiplok has a new ground/wall anchor that'll be available from around the end of February at a price of £69.99.

Ankr features a hardened steel cylindrical outer case and a rotating inner which, when mated with a lock, cannot be removed.

"This unique design allows for maximum security without the need for permanent bolts, meaning Ankr is both easy to install and can also be moved to a different location if required at a later date," says Hiplok.

It is designed for both indoor and outdoor use and has a Sold Secure Gold Level security rating.

Evoc's new Road Bike Bag Pro allows you to keep the handlebars of your road or TT/triathlon in place when flying, which saves a bit of faff. It'll be particularly welcomed by those who aren't confident of their mechanical skills, although most of us would welcome the opportunity to save a bit of time.

If the distance from the bottom of the large chainring to the top of your saddle is less than 86cm, all you need to do is remove the wheels and pedals before fixing your frame and fork to an internal stand (if your saddle height is higher than that you'll have to take the seatpost out). 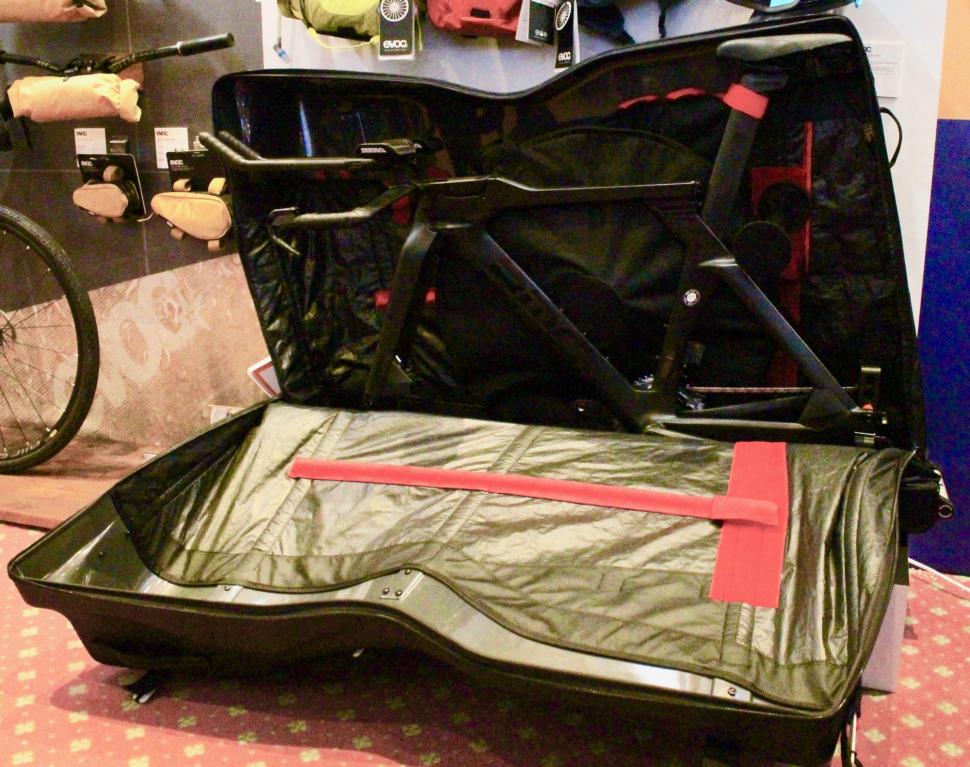 The top and bottom are rigid plastic but the central section isn't, making for easier storage. Side rods provide the structure when in use.

Road Bike Bag Pro has a claimed weight of 11kg, which is similar to many bike boxes that we've reviewed. It's available now for £750. 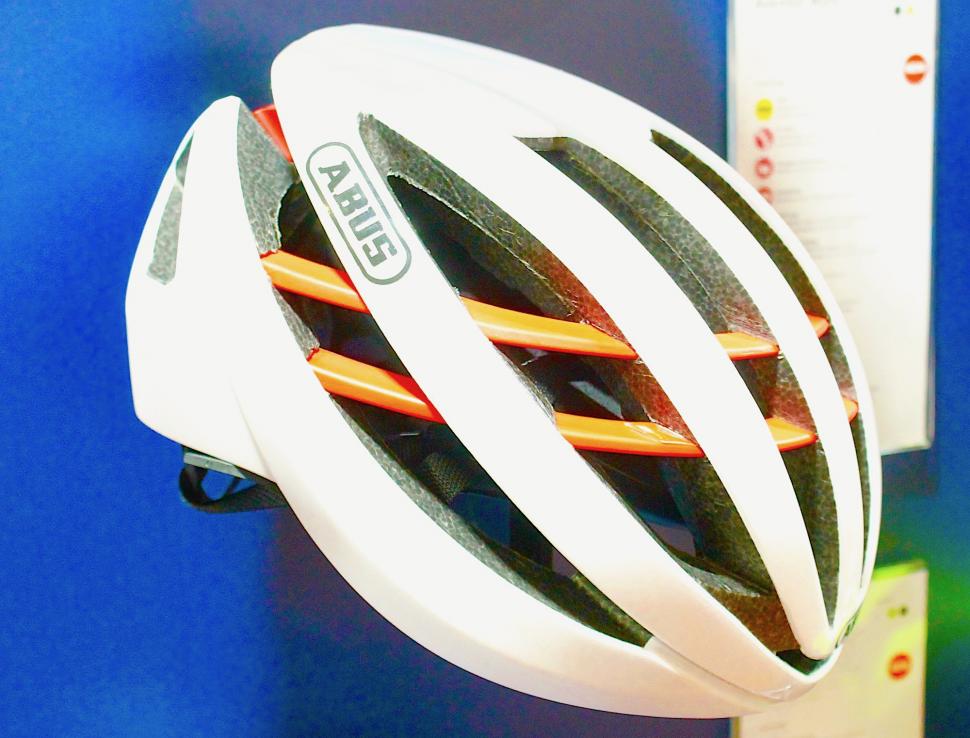 Abus is introducing its Quin smart system to several of its helmets, the idea being to alert your emergency contacts of your situation and location if you're involved in a crash.

Abus says that there's even potential to give emergency services information about the nature of the incident in future.

Topeak offers Tetrarack with no need for eyelets 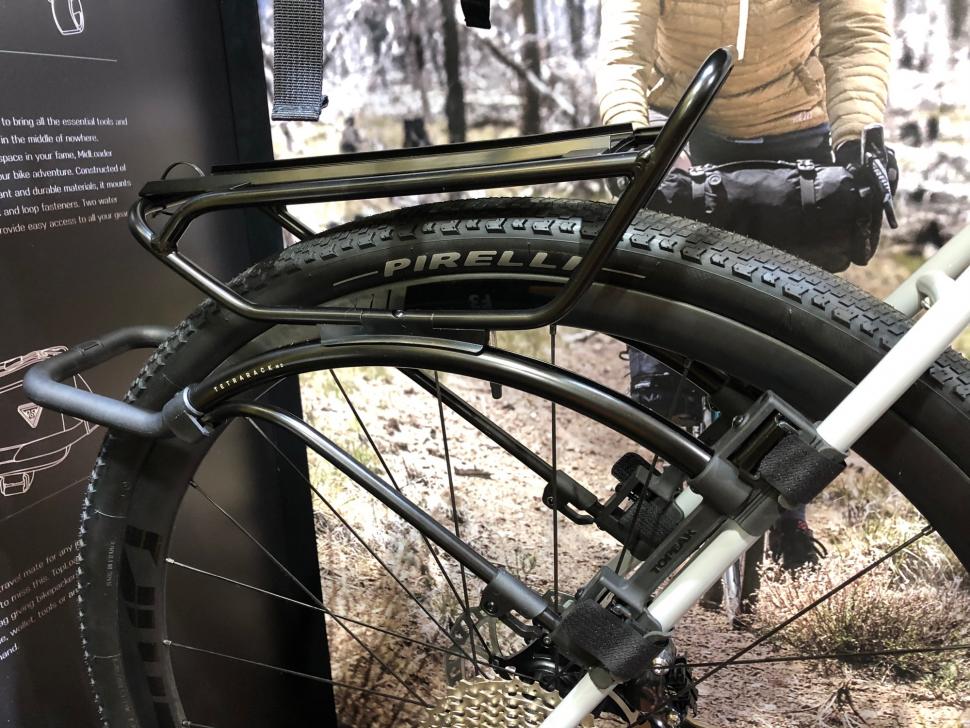 Topeak has introduced a new series of front and rear Tetraracks that attach to your frame without the need for eyelets.

The racks come with rubber feet that are held on your seatstays or fork legs by hook and loop straps. You then tighten bolts to secure the straps and level the loading plate so that it runs parallel to the ground. You can use the racks with both trunk bags and panniers.

Here's how to fit Tetraracks

The Tetraracks come in road and mountain bike versions and are priced £89.99.

Pirelli now offers its P Zero Velo clincher tyre in what it calls a Classic edition with tan walls (£49.99). 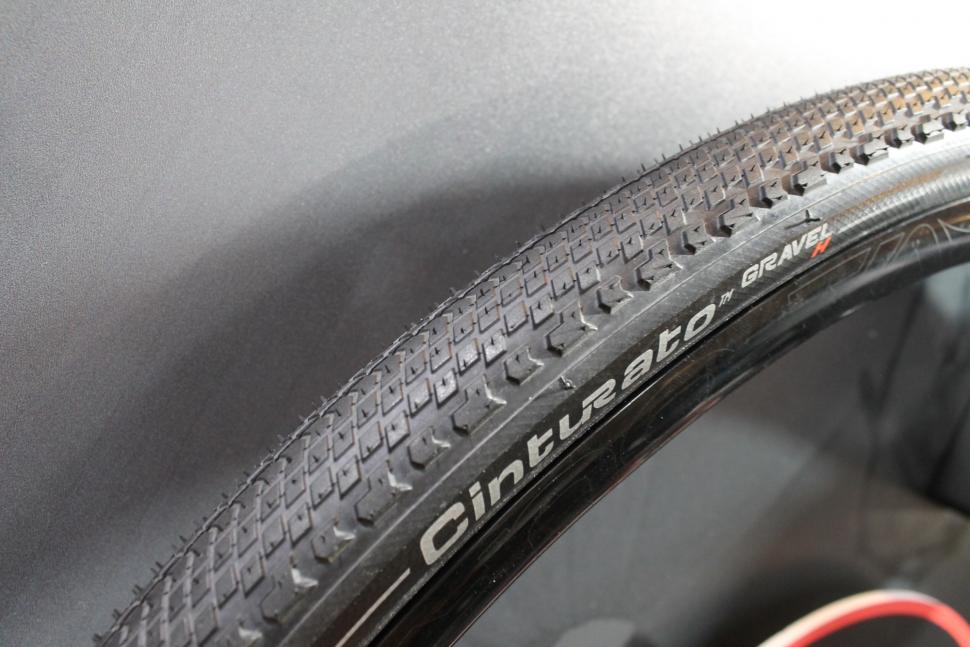 We told you about the brand's Cinturato gravel and cyclocross-specific tyres when they were announced last September. https://off.road.cc/content/news/pirelli-launch-new-cinturato-gravel-and... They're now available. 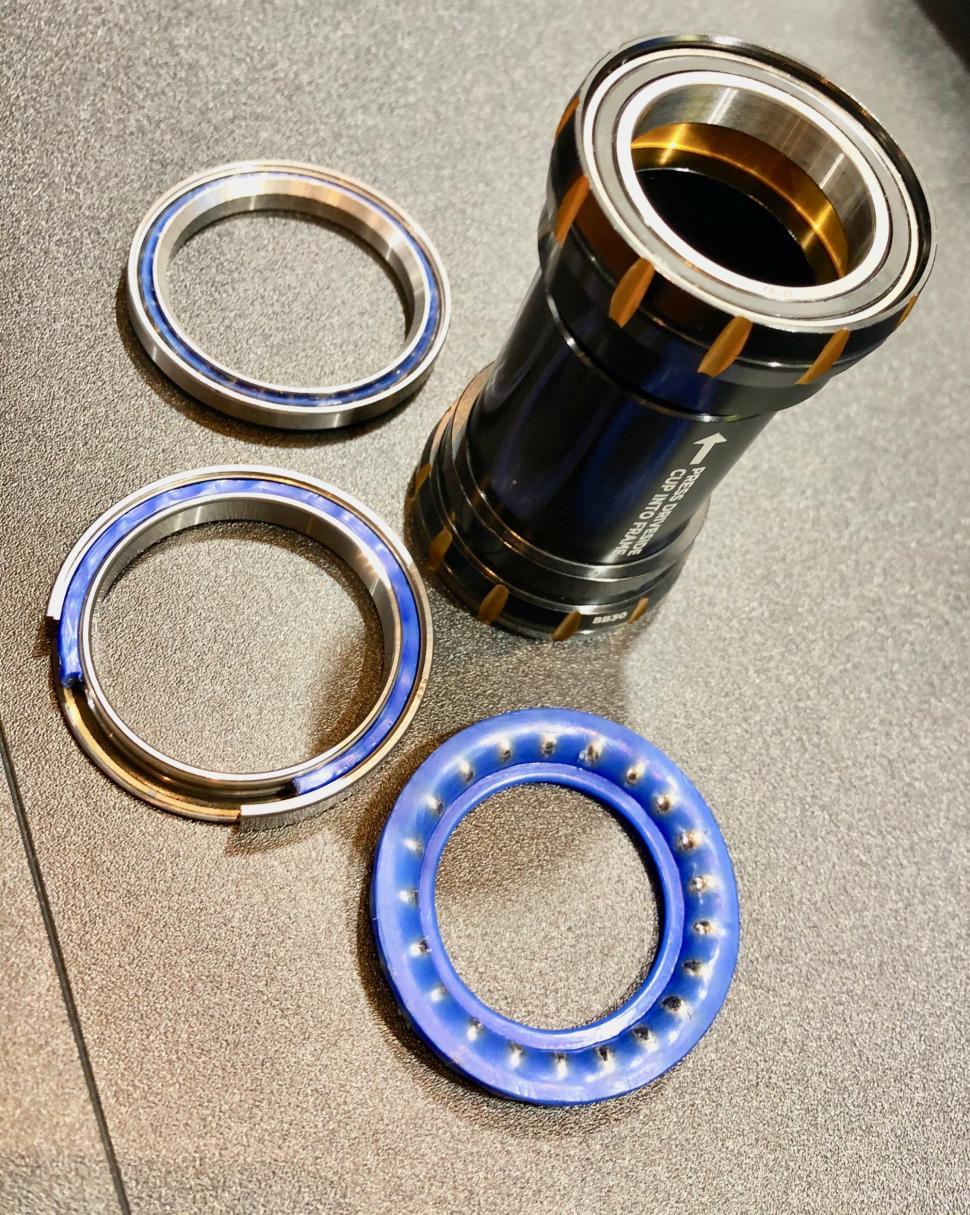 "Instead of standard grease lubrication, the bearings contain an oil-filled polymermatrix," says SKF.  "This technology... is particularly suitable for bearings used in locations that are likely to be heavily exposed to dirt, dust and water."

Originally developed for use in the food industry, the MTRX bearings are designed to handle being pressure washed repeatedly. The solid oil can't be flushed out, there's not much room in the bearing for water or dirt to settle, and there's no need for re-greasing. The bearings sit in 6061 T6 machined aluminium cups.