Girona is a known cycling hub. Not in a cycle-centric way like Stockholm or Rotterdam say, where the bicycle is worked into daily life, from commuting to doing the shopping, but instead culturally and in a way counter-culturally, the natural migration of the pro cycling hopeful or bike coffee bar opener dreamer has a mapped destination post-Lance.

The cycle lanes make it officially bike friendly but the feeling you get sitting having lunch in a typically suave southern European square here and see another group of expensive wheels clack past rotated by immaculate shoes and gaudy socks, makes you think this is a real-life equivalent of living on the pages of a lifestyle magazine for a cyclist. It's a town backed up by the Pro sport side of cycling but naturally, the fashion element’s never far behind that.

You get the slight feeling of being front row at an Armani catwalk show outside some cafes. Not that that’s a bad thing, i mean who would willingly go back to the purple splashes of a 1987 Agu Sport jersey with yellow shorts, but cycling’s taken itself more seriously in recent years and it's renewed confidence has brought bold statements in design over the black/red/white template of even a decade ago.

I last came to Sea Otter Europe two years ago and as impressive a launch show as it was, it felt like it was reaching out in its infancy to find its way a little.

What was evident then but even clearer now is it’s a show built around testing and riding rather than just gawping. The pump track has grown as have the road routes and mountain bike trails but now an organised gravel ride joins the salvo. It feels like more of a festival than a bike show, to be honest. The sheer amount of ‘demo bike’ number plates whizzing past seeking out paths to freedom illustrates the focus on audience participation. And that bike riding cohabits all ages and cycle types alike. Kids trial North Shore duckboard and trials obstacles along with adults on a similar discovery curve. It’s more a Le Mans free for all that it is categorised by race ability. Racers lap amateurs lapping kids. Safely, respectfully and smiley. Without focusing on individually techy observations (I’ll leave that skill to Dave), my general notes were of the mood of industry rather than a preferred new saddle type. Other shows like Eurobike are probably more applicable to actual product comparison, to be honest as on the whole, they're all there together under eight roofs. Sea Otter left me warmed by its interaction with people. And the Costa Brava is a different market to a visitor to the UK or Germany or indeed California I am sure, but what was interesting to me was how off-road focused it felt. Not just because Grav is seen by many as the new mountain biking, although to some of us that are old enough it sort of is mountain biking before the comfort years, but also that actual mountain biking might just be the new mountain biking again next.

And as much as (pardon the pun) everything goes in cycles, perhaps the ‘Grav is the new Gravity’ approach might lead in a couple of years to the clothing side of things going full circle and the powers that dictate will have us believe yellow is the new black in short circles. Perhaps. Never say never. Basso has entered the gravel bike market with the Palta 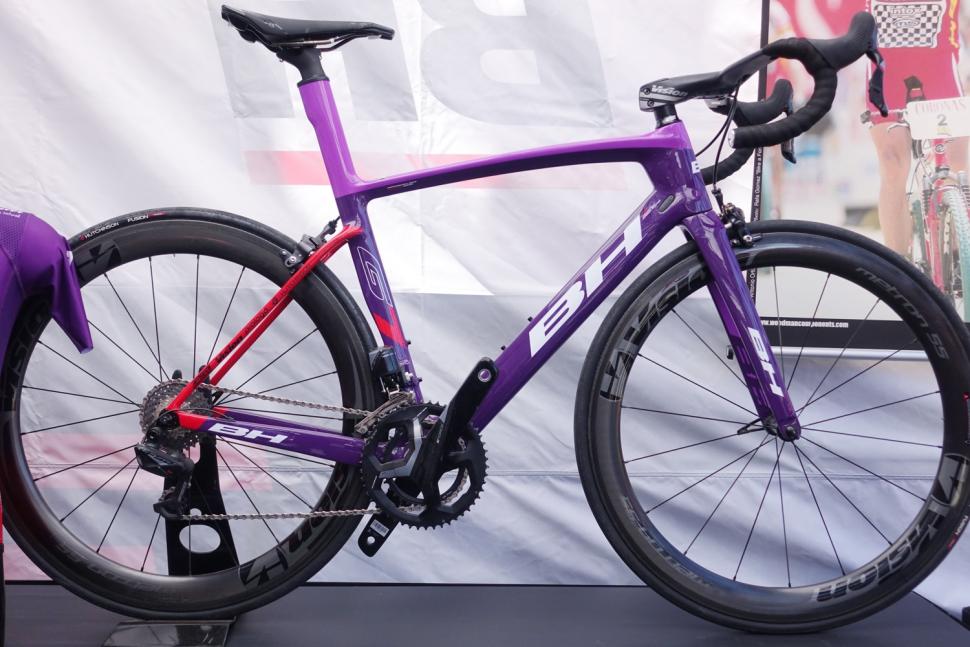 Spanish brand BH used to have a presence in the UK but it's not a company we sadly see much of these days, but hopefully, that'll change because we'd sure love to swing a leg over this beauty. Another bike we've yet to review following Mat's first ride at its launch earlier this year, it's the new Cannondale SystemSix and represents the US company's first foray into the world of aero bikes after resisting for many years. We interrupt this roundup of modern bike tech to bring you this marvellous Klein Adroit Backfire from 1991. This was the era when mountain biking was The Best Sport in the World and Klein made a name for itself with coke can sized aluminium tubed mountain bikes. Help! We're stuck inside a retro bike time machine! This is a stunning example of a 1990 Manitou hardtail made from Easton RAD tubing with the company's own suspension fork. And finally in our wonder down memory lane is this 1992 Yeti ARC. Yes that's a very sky high stem and triple chainring. 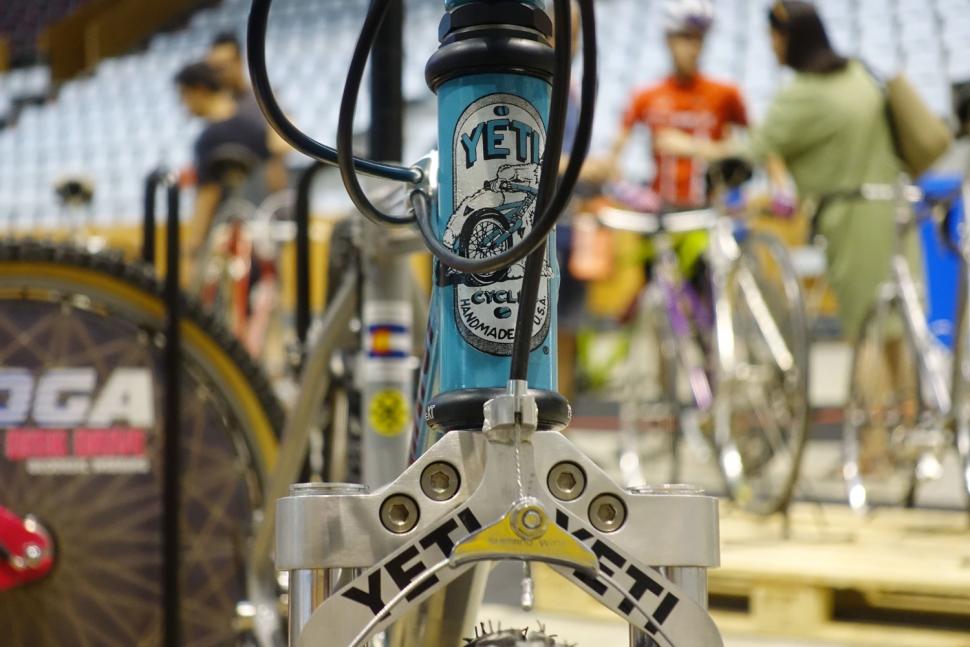 When mountain biking was cool. Right, back to normal service... ...here's a specially painted Canyon Aeroad. Answers in the comments who it was painted for. Assos was showing some bold designs. What do you think? 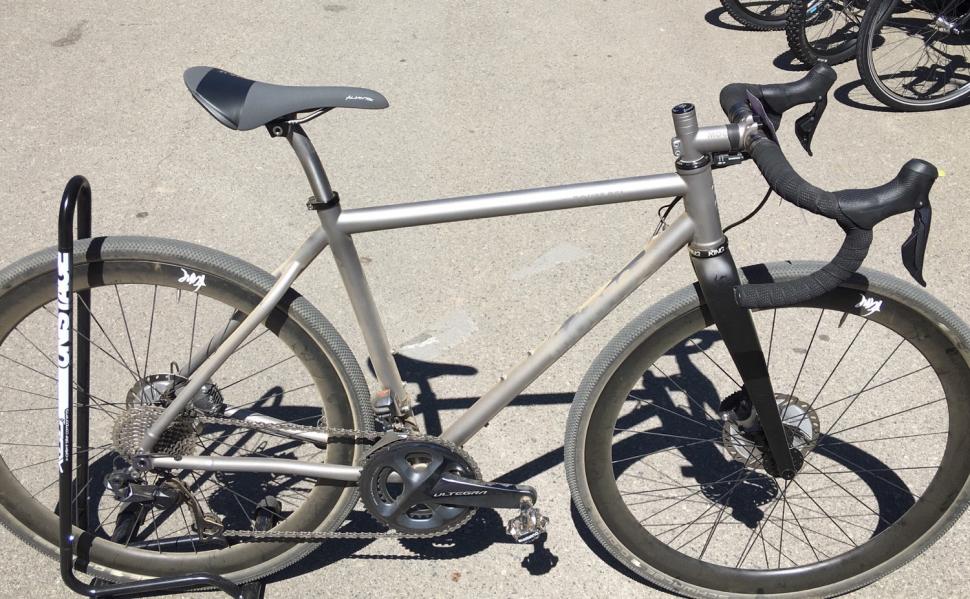 A Moots Routt 45 (we think) gravel bike from the titanium masters. Award for the loudest paint job award goes to Vitoria, a bike brand started by Spanish ex-pro Juan Vitoria back in the 70s. French brand best known for lightweight race bikes has launched into the gravel bike market with the 765 Gravel RS. The GT Grade launched a few days before the Sea Otter show and we got to first ride it, which you can read and watch here. The new Grade is big on versatility, as this bike shows with every possible bag attached and extra water bottles on the fork. 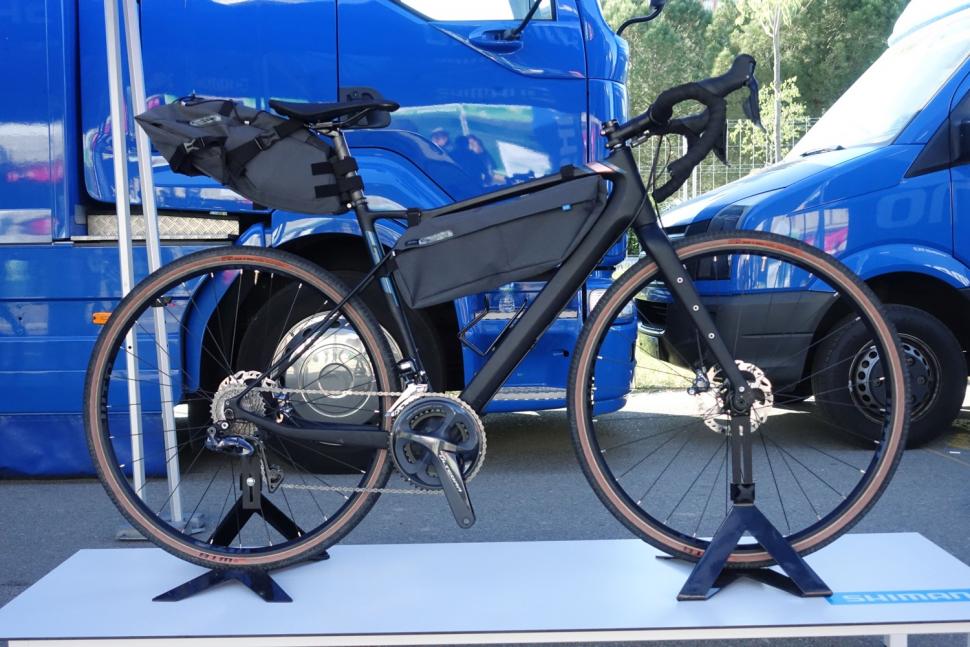 Here is the GT Grade from the driveside. Too much gravel action for you? Here's the sleek looking Orba Orca Disc with a new FSA crankset and Vision wheels. Yes, your eyes don't deceive you, that is indeed a full-suspension gravel bike. This one comes from US company Niner and is called the Niner's MCR (Magic Carpet Ride) and offers 50mm rear wheel travel and 40mm up front from the Fox AX fork. It has been seen before as a prototype, but it's now going into production. Maybe we'll be able to get a ride on it. Remember that new Allied Able gravel bike that launched last weekend and won both the men and women's Dirty Kanza? It shocked the world with elevated chainstays, but we've been down that road before, not that it's a bad thing to revisit it again with modern technology. 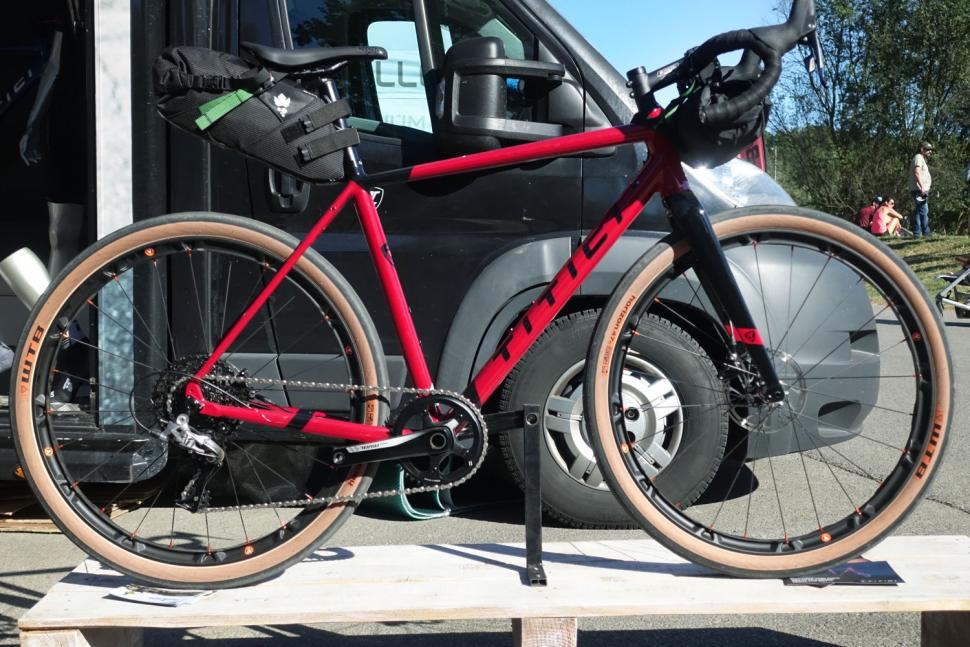 Titici (stop sniggering in the back) is an Italian company that has also designed to don a flannel shirt and produce an all-road/gravel bike. This is a more affordably priced model compared to its carbon Flexy Gravel with its wafer thin top tube. And finally, let's end this roundup of highlights from the Sea Otter Europe show with this stunningly painted Trek Madone SLR Disc.