The average speed was furious, KOMs fell and some of the power peaks were unimaginable to us mortals. Here is some of the data we've spotted so far shared by riders from Paris-Roubaix on the internet's foremost social fitness network...
by Jack Sexty

If you follow any world class pro riders on Strava, you might have noticed quite a few rather impressive 'morning rides' pop up since yesterday afternoon from a gang of cyclists based in northern France... you may have guessed already but it was in fact data from Paris-Roubaix, and we've counted 47 riders who have uploaded their rides from the brutal 260km course so far.

Neither Phillipe Gilbert or Nils Politt, who battled it out on the velodrome in a sprint finish with the former bagging the win, have uploaded their rides; but we've picked some files of interest for you to check out and feel all inadequate after seeing what it takes to compete at the biggest one-day race on the pro cycling calendar. Our Strava is set to miles but where we've quoted speeds, we've used kilometres in an attempt to keep both metric and imperial adopters happy. If you want to do any of your own workings, multiply miles by 1.609 to get your answer in kilometres per hour...

The story of the day other than Gilbert's victory, Siskevicus got to the velodrome so late last year that he had to ask security to open the gate so he could finish. A year on and he finishes 9th to record the best result of his career by far. With a monstrous weighted average power of 335 watts for the ride, Siskevicus' power peaked at 1,296 watts, and his average speed was 42km/h. Burning an estimated 4,834 calories, Siskevicus burned off the equivalent of nine Big Macs for his efforts. 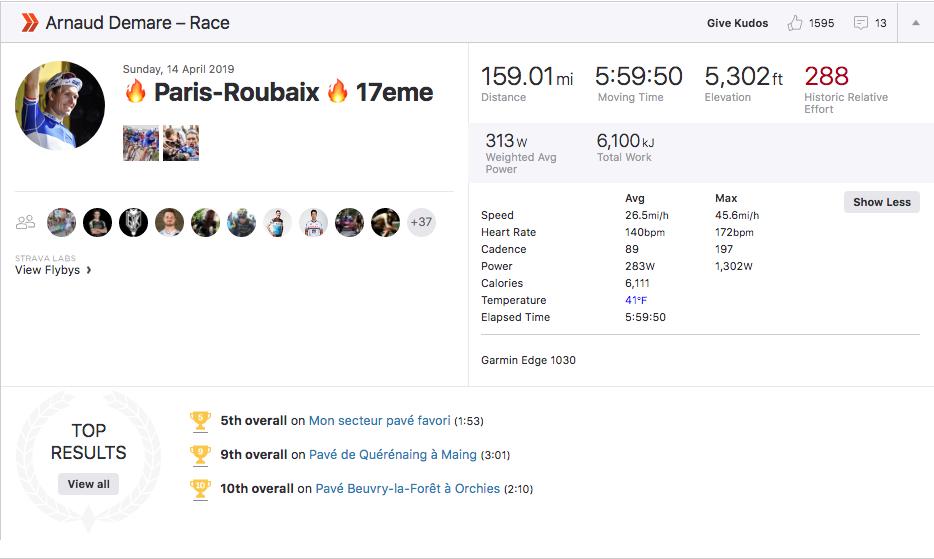 The 74kg Frenchman's weighted average power was recorded at 313 watts, peaking at 1,302 watts. To record one of the fastest times of the day on the Pavé Beuvry-la-Forêt à Orchies segment, Démare needed 397 watts and rode at 41.3km/h over the cobbles. 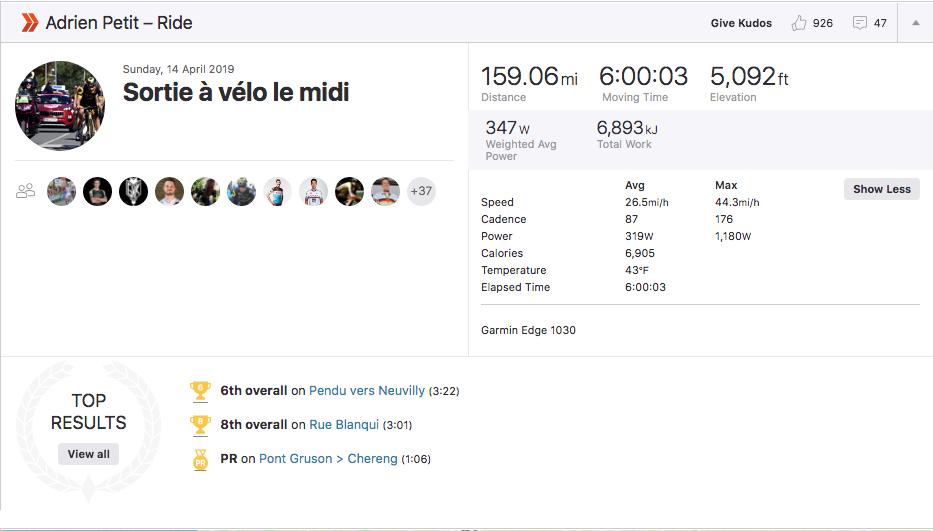 The Total Direct Energie rider's 'lunchtime bike ride' consisted of six hours pedalling at an average weighted power of 347 watts. His average cadence was 87 and peaked at a whopping 176, and during the punchy Côte Goolaerts climb (named after the late Michael Goolaerts who tragically passed away last year) Petit held 472 watts for nearly two minutes before rarely dipped back under 400 for the next 15 minutes. 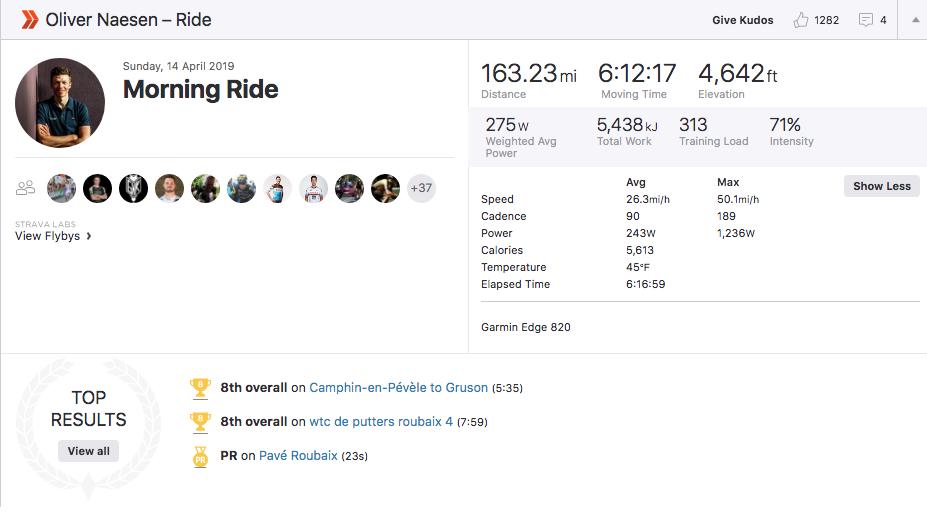 The Belgian, who rides for AG2R La Mondiale, recorded a weighted average power of 275 watts - which is equally as impressive as the heavier riders above when you factor in that Naesen weighs around 71kg. An average cadence of 90 and peak of 189 is a little higher than usual for a powerful one-day specialist.

Küng is formerly a time trial specialist, so some may have been surprised to see the Swiss finish so high up yesterday. He averaged 43.2km/h over the whole ride, hitting 69.5km/h at his fastest. 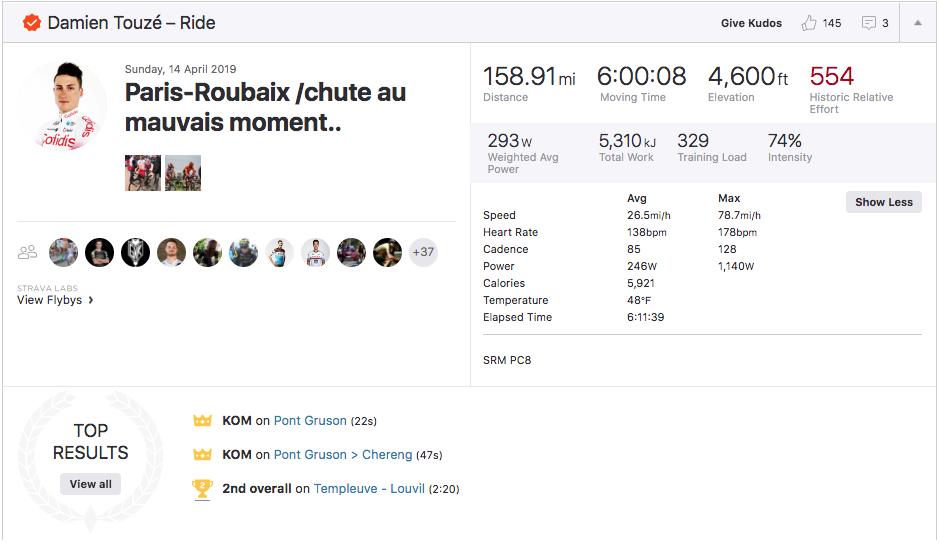 The Cofidis rider's final placing doesn't tell the whole story of a gutsy performance, bagging two KOMs on his way to the Roubaix velodrome despite suffering a nasty fall. His 22 second Pont Grusson KOM is four seconds faster than anyone previously, and he recorded a speed of 71.4km/h on this section, topping out at scary 104.4km/h. The longer 'Pont Gruson > Cherang' segment was taken at an equally furious speed to bag Touze's second KOM, recording an average speed of 69km/h.

* A car may have been involved in the KOMs Touze recorded as his bike was swapped out, although the elevation profile on the sections suggests the speeds he hit may have been possible by bike. We'll try to find out and update as and when.

You might have spotted there are some notable and surprising omissions from the list, but looking at the full results gives some indication as to why household names and active Strava users such as Greg Van Avermaet (12th), Wout Van Aert (22nd),) Alexander Kristoff (56th) and Andre Greipel (DNF) may not have shared their rides. We’ll be updating with uploads that pique our interest if any more get added to cycling's foremost social fitness network this week…