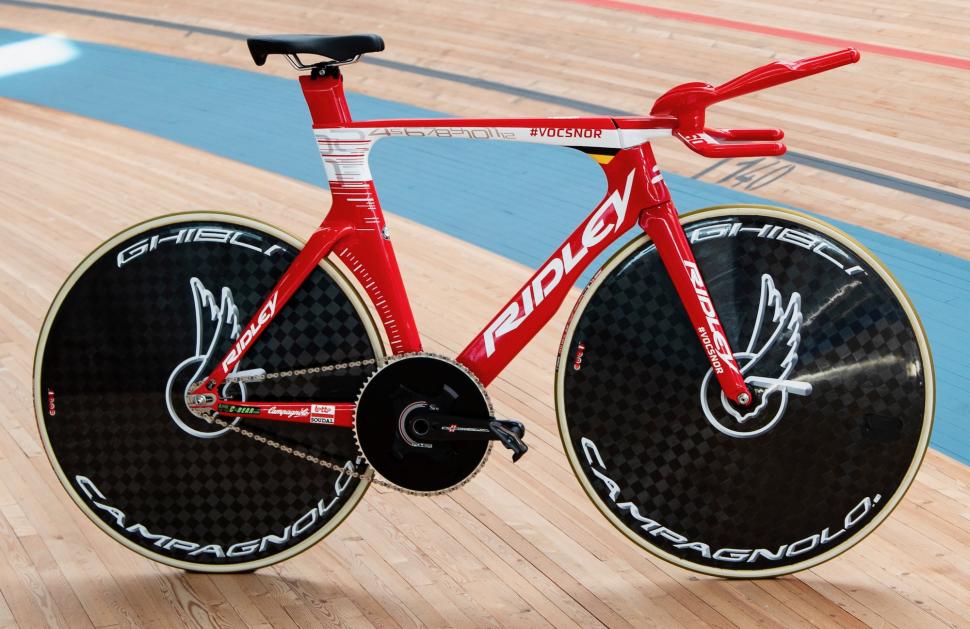 Belgium's Victor Campenaerts, a Lotto-Soudal team member, beat the hour record in Mexico today and here's the bike, named the Flying Moustache in a public poll, that he'll be riding. 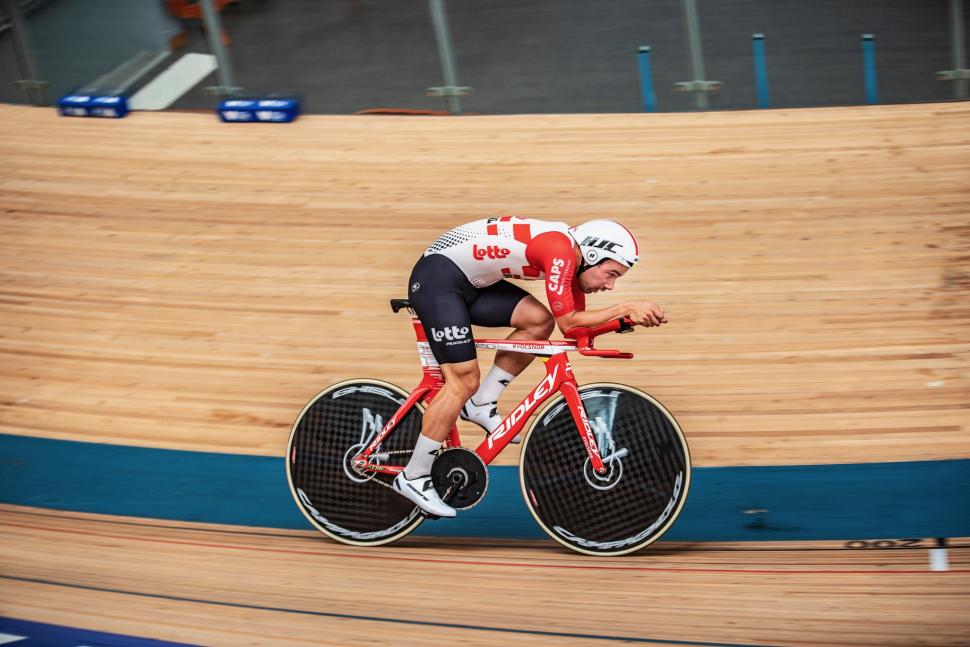 The current record of 54.526km was set by Bradley Wiggins at the Lee Valley VeloPark in London back in 2015. 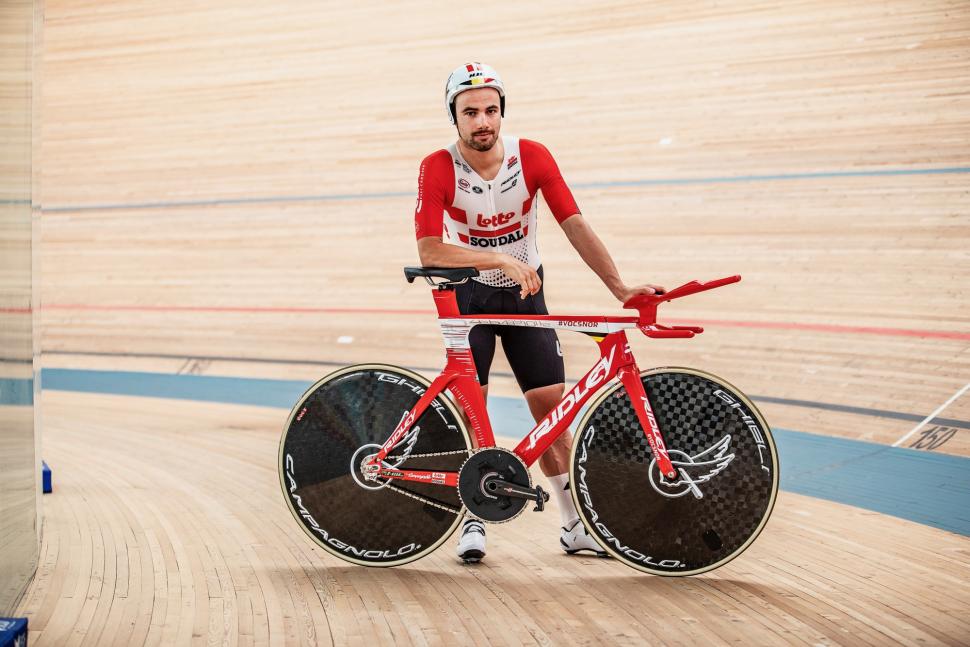 The geometry of the Ridley Arena TT frameset is exactly the same as that of Campenaerts’ Dean FAST. Instead of fitting the rider on to a stock frame, the frame geometry has been fully customised to Campenaerts’ ideal position. The down tube features Ridley's F-Surface Plus which is tech that the brand uses across all of its aero bikes, including the Noah and the Dean. The surface is grooved in certain areas to reduce drag.

"What these grooves do is create a tiny turbulence which causes the main flow of air to better follow the shape of the tube," says Ridley. "With a smooth air travel around the frame, you’ll expertly cut through wind. The stronger the wind, the more you will feel this technology working for you." "This process started in January 2018," says Ridley. "Victor was new to the team and eager to test this new technology. We were able to create a mould of his left and right arm, from his elbow to the grips of the extensions. Subsequently this was copied into a carbon version."

The extensions gained UCI approval and Campenaerts first used them at the World Championships individual time trial in Innsbruck last year, where he took the bronze medal behind Rohan Dennis and Tom Dumoulin. The base bar is astonishingly narrow – 33cm, to be precise (the drop handlebar on a standard road bike is usually somewhere between 40cm and 44cm). Campenaerts will only use the base bar for the first few seconds as gets up to speed from a standing start, and thereafter will just add to the drag, so the minimum he can get away with has to be an advantage. 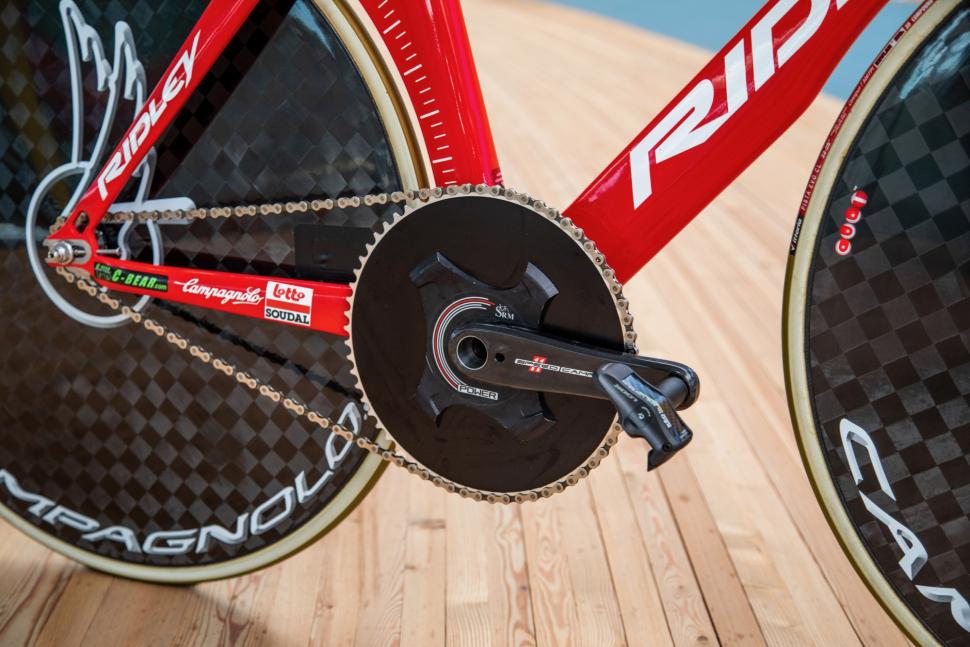 Campenaerts is currently experimenting with 63x15 and 59x14 gears (Wiggo used 58x14 on his Pinarello Bolide HR). Those two ratios are very similar, resulting in 8.7 metres development per pedal stroke. Campenaerts will aim to pedal at a cadence of around 105rpm to beat Wiggins' record. Of course, that's easier said than done. 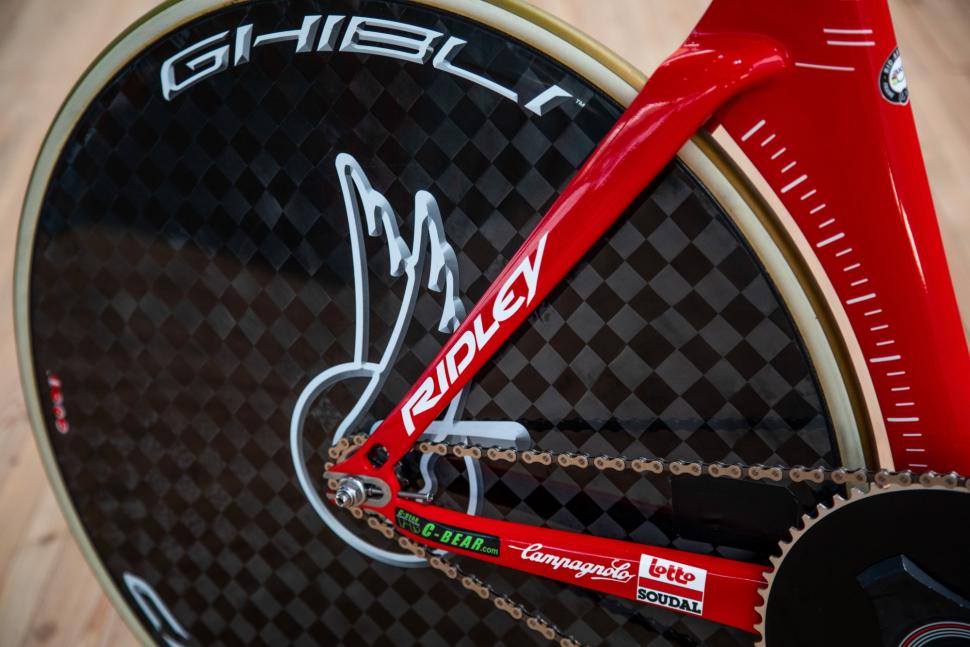 The team will take six chainring sizes (from 58-tooth to 63-tooth) and six sprocket sizes (13-tooth to 18-tooth) to Mexico and make the final decision on what to use in the days leading up to the record attempt on 16th or 17th April.

The chainring and sprocket have been specially milled with the aim of reducing friction, and Campenaerts will use a road chain instead of a track chain.

(Yep, we showed you this last month but he's broken the record now so it seems like a good time to break it out again.)

1
How does this work!? Crazy half-wheeled bike concept goes viral
2
Cyclist killed after being struck by van driver during time trial
3
Lone female cyclists are “being targeted”, says former Scottish champion
4
“How would you like to be on camera now?” Shirtless driver accosts CyclingMikey
5
Near Miss of the Day 790 updated: Cyclist gets ANOTHER close pass from same taxi the day after punishment pass
6
UCI “kindly requests” that riders stop using race number sleeves
7
Near Miss of the Day 791: “Careful lad,” says van driver parked in bike lane… as another driver pushes in front
8
Cyclist says he was refused service at Costa Coffee drive-through – due to company policy “not to serve people on bikes”