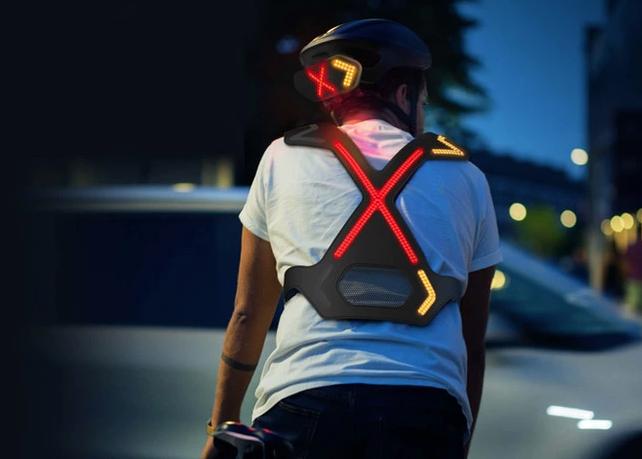 WAYV launch safety harness and helmet headset with LED indicators, and they're crowdfunding on Kickstarter

Yes they've got indicators, yes there's a companion app, and yes they're crowdfunding on Kickstarter...
by Jack Sexty

This isn't the first cycling safety product covered in flashing indicators to appear on Kickstarter, and it certainly won't be the last... but even so, WAYV say their smart wearable system, consisting of a harness, headset and remote, is "unlike anything else out on the market" thanks to the strategic placing of the indicators that "provide maximum visibility in any riding position".

WAYV's creator Amit Trehan explains that the idea for the product came following an accident at a London junction: "Although I had lights, the driver simply couldn’t see me properly. WAYV has tactically positioned LED lights on the harness to provide maximum visibility in any riding position, as well as turning indicators. No other bike light currently does that. We designed it with commuters in mind, as it can be used with or without a backpack. And with the indicating capabilities, it will be much easier for others to see how you want to turn. This product was created to help not just the cyclists, but all road users.”

There are over 200 LED's lights in the WAYV harness, on the front and back, which can also be fitted directly onto backpacks. Slap bang in the middle of your back is a whopping great big "iconic hi-viz X", just to make totally sure folk will see you.

If that wasn't enough, you can pair it with the helmet headset which attaches to most vented helmets according to WAYV. It has another big red X and two indicators that correspond to the signals on your harness, all controlled via the handlebar-mounted detachable remote controller. The remote has a lever that you just nudge with your thumb to operate it, and has blinking icons to remind you that you're indicating.

Of course it wouldn't be really smart without its own app, and WAYV's app enhances your experience by providing notifications about your battery levels, and allows users to customise their light patterns between flashing and static.

WAYV aim to raise £66,000 via Kickstarter to bring their product into full production, and have currently raised just over £4k with 30 days of their campaign left to go. You can get the harness, headset and remote for £69 at a super early bird discount price, going up to £135 for a limited edition personalised set with a t-shirt - orders are expected to ship out in October 2019. Head over to WAYV's Kickstarter page for more info.