The Scottish brand have been hard at work in the wind tunnel with aerodynamics guru Simon Smart, and say they've created "the world's most advanced aero clothing and helmet"
by Jack Sexty

Scottish brand Endura have launched their new Endura D2Z range, a collaboration with wind tunnel experts Drag2Zero, which they say includes "the world’s most advanced aero clothing and helmet".

Endura worked with aerodynamicist Simon Smart of Drag2Zero at the Mercedes-AMG Petronas F1 wind tunnel in Brackley, Northamptonshire to optimise their high-end aero kit designs, before making it all 350 miles further north in Livingston. A previous iteration of a Drag2Zero skinsuit was worn by Alex Dowsett when he broke the hour record back in 2015, and the Movistar pro team have a long-standing partnership with Endura and Drag2Zero. 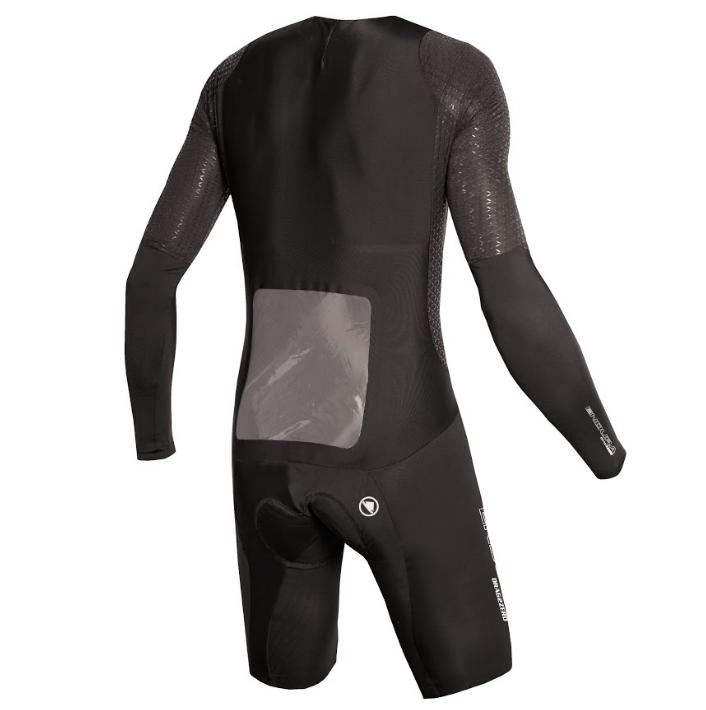 The Encapsulator skinsuit (above) is optimised for speeds at 45kph or over, meaning this is aimed squarely at lightening quick time triallers. It's got Endura's 1000 series Aero chamois pad, specifically shaped for more aggressive riding positions, which is fast-wicking and has an antibacterial finish. The pouch for sliding your race number in at the rear was initially banned by the UCI before eventually being accepted, and eliminates the issue of causing your suit damage through having to attach safety pins. The suit has five different fabrics included within it to provide the best possible fit, durability and aerodynamics. 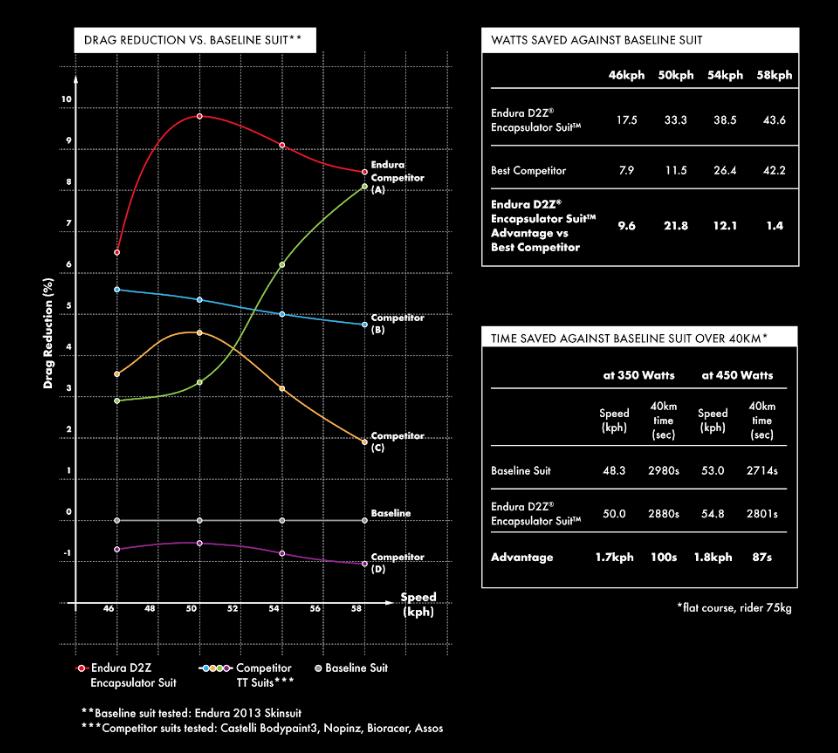 Endura tested the Encapsulator against a 'baseline' suit, their own 2013 Endura skinsuit, and five other competitors including Assos, Nopinz and Castelli: at various speeds and wattages Endura claimed their suit came out on top, with a 33.3 watt saving over the baseline suit and 21.6W over the best competitor at 50kph. Over a distance of 40km at 350 watts, Endura say the Encapsulator saved 100 seconds over the baseline suit, or 1.7kph.

Endura also have a trickled-down skinsuit in the new range, the Roadsuit, aimed at "the passionate rider looking to gain extra seconds on the local race circuit, hit ambitious targets on a big Gran Fondo and set new PB's". This one has short sleeves and loses the rear race number pouch, but Endura still claim it nets substantial aero savings verses various bib and jersey ensembles. If you just don't think you can rock a skinsuit, you can also get D2Z bib shorts and jerseys. 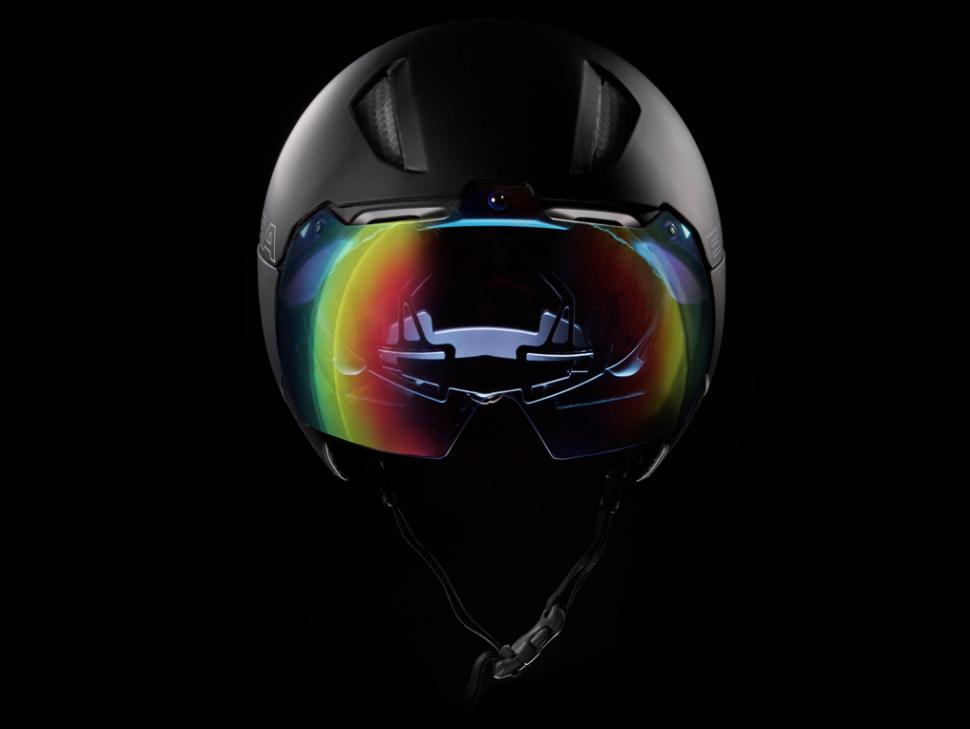 Endura's Aeroswitch helmet has been causing a bit of a stir since it was first unveiled (read our first look from Corebike back in January) due to its two-in-one design. It has a removable tail so you can use it as either a TT or aero road lid, and this can be mounted or removed in seconds. The same goes for the visor, which is held in place by magnets. Endura have used a 'Koroyd' core which is said to provide market-leading impact protection, while its tubular construction keeps the weight low. in terms of aerodynamics, Drag2Zero worked to reduce the negative effect of increased yaw angles, and claimed watt savings over six competitors at speeds of 40, 50 and 60kph. 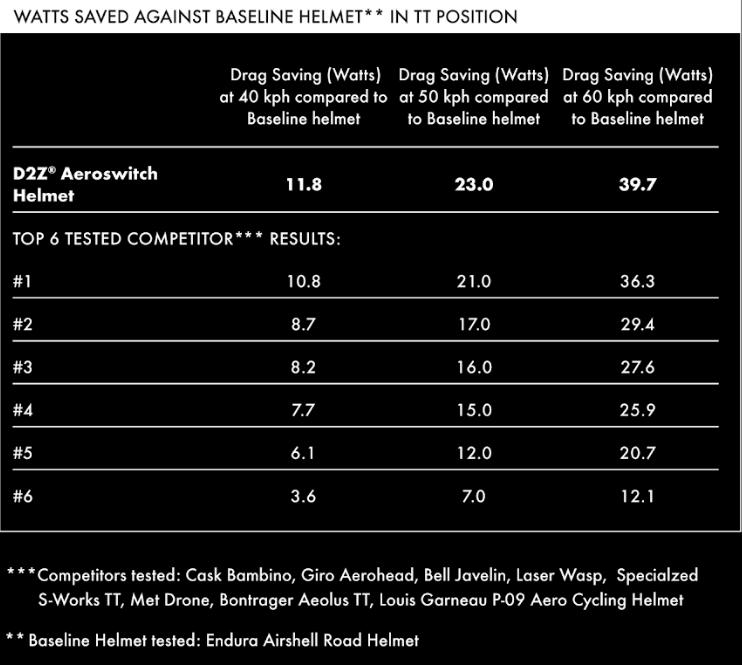 Extraordinary performance claims of course mean some pretty extraordinary prices too: The Encapsulator skinsuit is an eye-watering £429.99, the Roadsuit is £329.99 and the Aeroswitch helmet is £349.99. If that hasn't put you off, all the gear is now available to buy via Endura's website.

1
Transcontinental top 10 contender forced to scratch after e-scooter collision cracks his frame
2
Driver who killed two cyclists during charity ride “didn’t understand severity” of incident, says prosecutor
3
Near Miss of the Day 809: “Just doesn’t get closer than this” – Cyclist squeezed between van and kerb at bike lane pinch point
4
Dual carriageway time trials suspended after cyclist killed on A11
5
Road rage motorist assaults cyclist and steals his camera after accusing him of ‘not riding in the bike lane’
6
Near Miss of the Day 810: Reckless overtake towards oncoming cyclist and bus… and some afters from the impatient driver
7
Drug driver sentenced to 21 months in prison for killing cyclist – seconds after using his phone to text friend
8
You can be the first to own the new Colnago Prototipo… but it’ll cost you – plus more tech news from SRAM, Pirelli, Brompton, Apidura and more