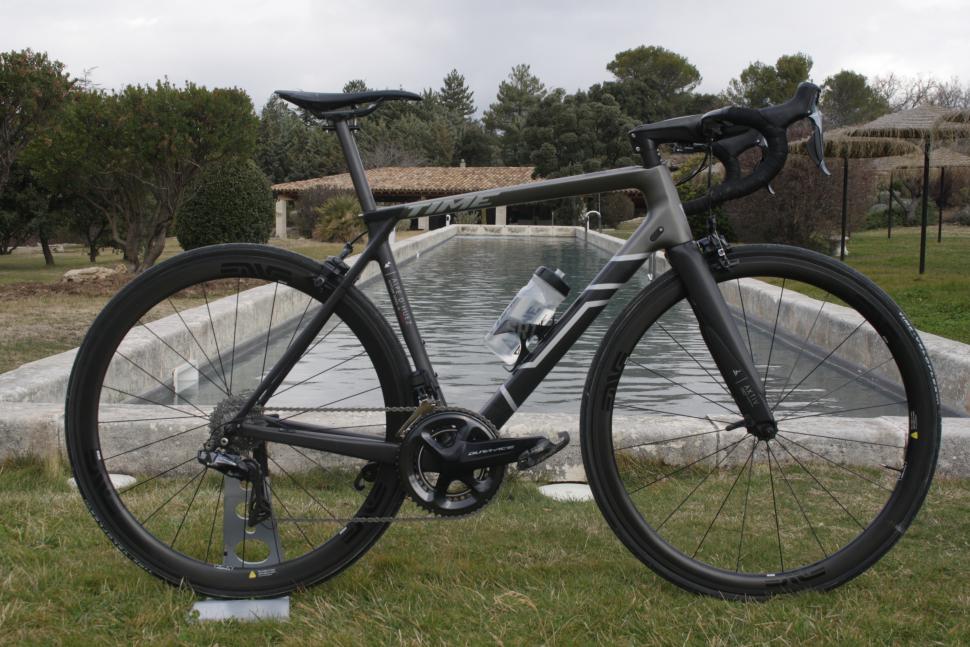 We recently revealed the release of Time's new superbike, the Alpe d'Huez, and were also lucky enough to take it for a spin in southern France. Here are some first impressions...
by Jack Sexty

Time have just launched the Alpe d'Huez, optimised for the mountains at 6.2kg and coming in at a whopping £12,000 in its most luxurious spec. Unfortunately for me I had to head out to the beautiful Bonnieux in France's Provence-Alpes-Côte d'Azu region to test ride the bike. Here are some facts, figures and initial thoughts about Time and the ride offered by this brand new superbike...

Time Sport were founded in 1986, and are as well known for their pedals as bikes. They were the second brand after Look in 1984 to develop a clipless pedal, releasing the TBT pedal in 1988 (actually developed by the same guy, Jean Beal, who left Look in '86 to found Time with his son-in-law Roland Cattin). Hand-built frames followed in the 90's, with the current models offered being the Scylon aero road and tri bikes, Fluidity endurance, Urbain commuter and now the Alpe d'Huez altitude bike. The Alpe d'Huez replaces the Izon.
Time pride themselves on their French manufacturing process: "we are driven by the perpetual search of perfection, innovation and the highest quality", say Time. They also recently launched the new Xpro pedals, with the top end Xpro 15 included when you buy the Alpe d'Huez 01 (the second-tiered Xpro 10 is shown below). I had them on my test bike, and for me they're the easiest system to engage compared to Look, Shimano and Speedplays. I know that some riders report concerns about the cleats wearing quickly, however we're told the latest versions have been toughened up. 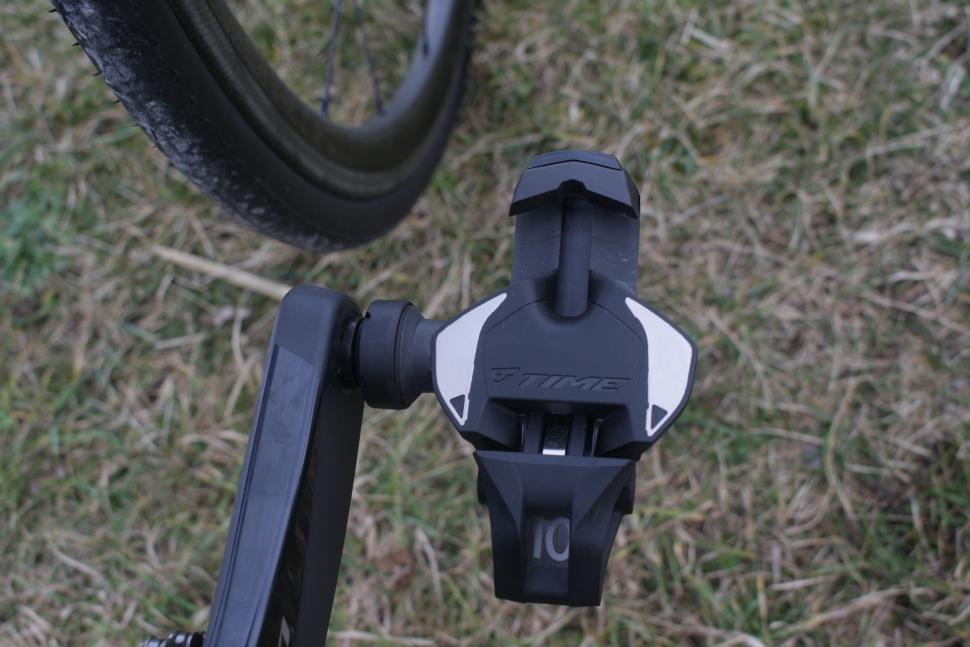 You can read all about it in Mat's factory tour report from 2013, but Time are famous for hand-building their frames in France, with everything from the R+D to the carbon weaving happening in their own facility. One of the more interesting titbits we got from the launch was about Time's business model in relation to their manufacturing process - been as the frames are painstakingly woven by hand they can only make so many, and CEO Sylvain Noailly openly said they don't really want or need to sell more than 10,000 bikes a year. If they did, presumably some aspects of the production would either have to be scaled up or outsourced. It's a pretty strong position to be in as a bike brand, assuming they are hitting their limit.
Time have been owned by the French ski manufacturer Rossignol since 2015. Noailly previously served in Rossignol's ski arm of the business for many years, and Jean Beal worked with ski bindings for decades before turning his attention to clipless pedals. The buyout hasn't changed Time's manufacturing model one jot . The launch of the Alpe d'Huez marks "a turning point in Time's history" so they say after a few years out of the spotlight in terms of World Tour team sponsorships. If I was a betting man, I'd expect that may follow the launch of this bike either this year or next. 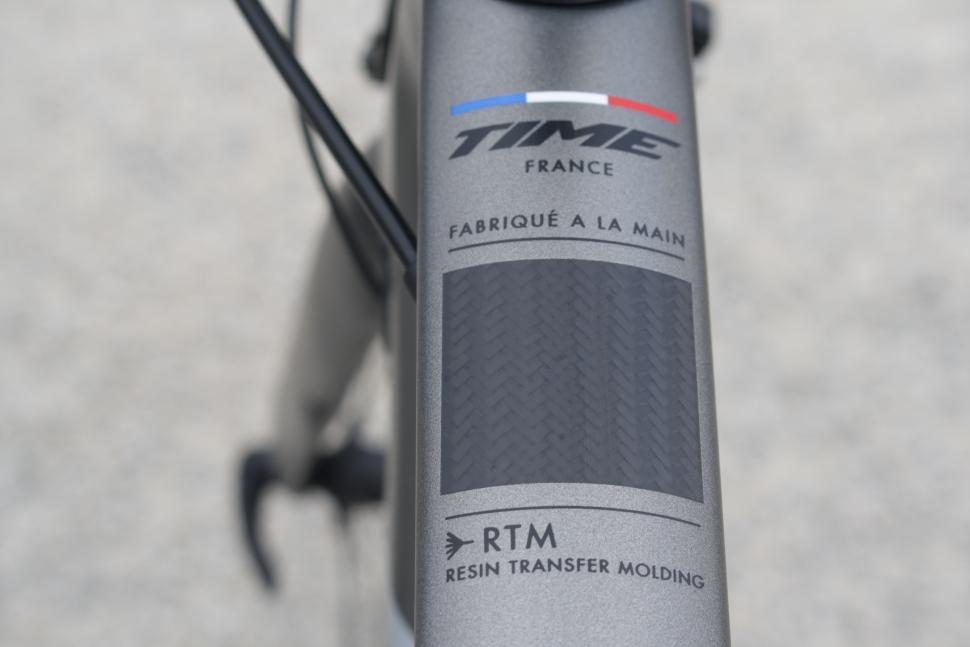 The test loop had a couple of decent climbs, fast descents and tight corners, perfect for testing out the Alpe d'Huez. I rode the all-singing, all-dancing Alpe d'Huez 01 with Dura-Ace Di2, Enve 3.4 wheels, Time by Veloflex tubular tyres, Selle San Marco Superleggera saddle and BB386 bottom bracket. Time's components included their Ergodrive aero-shaped handlebars, Monolink integrated stem, Aktiv fork and of course the 840g frame. The fork also appears on their Scylon, and while being noticeably oversized, they have tune mass dampeners inside to even out vibrations from rough tarmac. It does indeed feel very smooth at the front end, and I gave the bike a few good thuds on some rough sections and may or may not have done a slight wheelie or two to see how it reacted: all was well, the bike held its line with aplomb and I was brought back down to earth in a stable fashion every time without feeling much if not any vibrations. 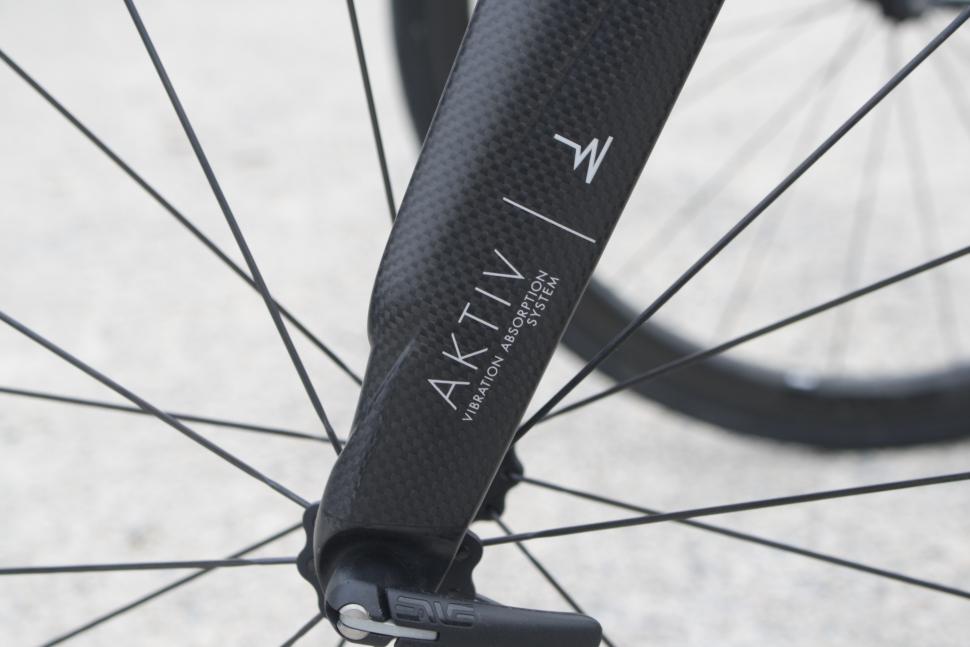 On the 01 Time have added the new DirectLink seatpost, that is said to improve energy transfer and balance out the rider's position. It's distinguishable from their other seatpost construction on the trickle-down Alpe d'Huez 21 because there are two allen bolts to secure it in at the rear. 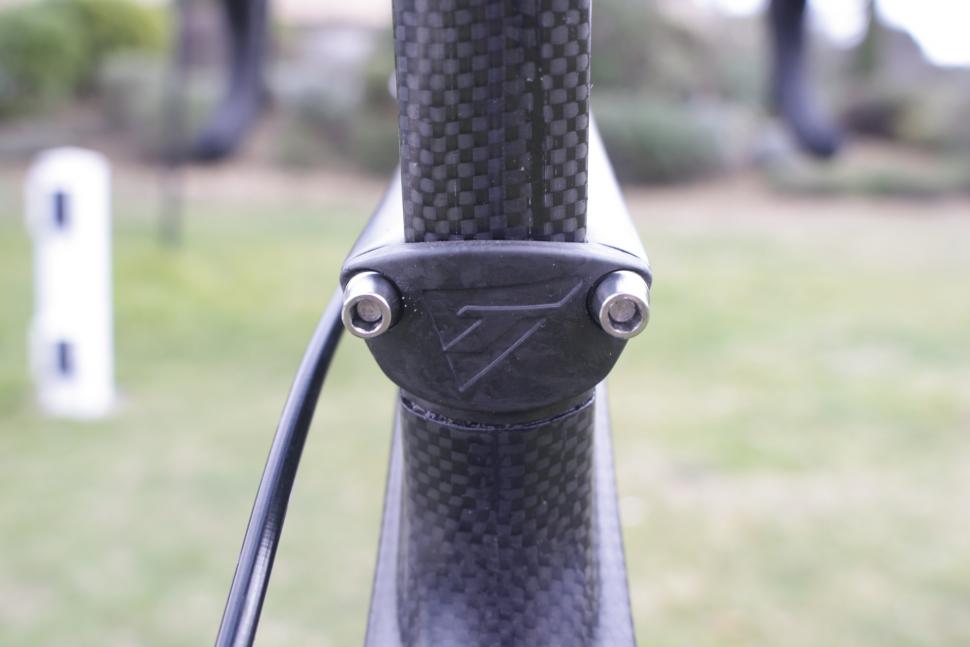 At the front the Alpe d'Huez has an integrated stem to bring you down lower, and the one-piece carbon Ergodrive handlebars feel plush and comfortable on the hoods and drops. In terms of cable-tidiness they haven't gone as far as concealing the Di2 junction box like BMC have done on their top-of-the-range Teammachine, but this is a minor cosmetic grumble. On the whole it's extremely pleasing on the eye, and I'm a big fan of the 'naked' frame where you can see the braiding of the carbon on unpainted sections. It means every bike will have a slightly unique pattern, and for me it's what I'd go for if I was buying a bike of this luxury. If you want more flamboyance Time can cater for that, and the Alpe d'Huez is available in countless different colour options that you can customise yourself on their online bikebuilder. A bike built to your specifications can be delivered within five weeks.

The geometry is about what you'd expect for a bike that's not quite aero but in no way a relaxed endurance frame - on a medium frame the seat and head tube angles are 73°, and the effective top tube is 55.5cm. Being used to aero road bikes I found it perfectly comfortable, and although my test ride was only 20-ish miles I didn't feel an ounce of discomfort after finishing up on a lengthy climb at the end of the loop. On some windy descents it took me a while to get used to the low weight of the frame and I felt a bit fragile, but this didn't take long to get used to. It cornered wonderfully and felt zippy and responsive when I got back on the pedals. You can really hammer it and get out the saddle without feeling any twitchiness, something I've sometimes found can happen with light frames paired with carbon handlebars.

Myself and another rider on the launch noticed a little brake rub, something I noticed during a steep ascent. The conclusion was that it was most likely due to the stiffness of the rims meeting a super stiff frame, and the lightweight spokes couldn't handle the load - something's gotta give. If rim brakes have fallen out of favour with you now discs are taking over, hydraulic disc versions of the Alpe d'Huez are arriving next year. 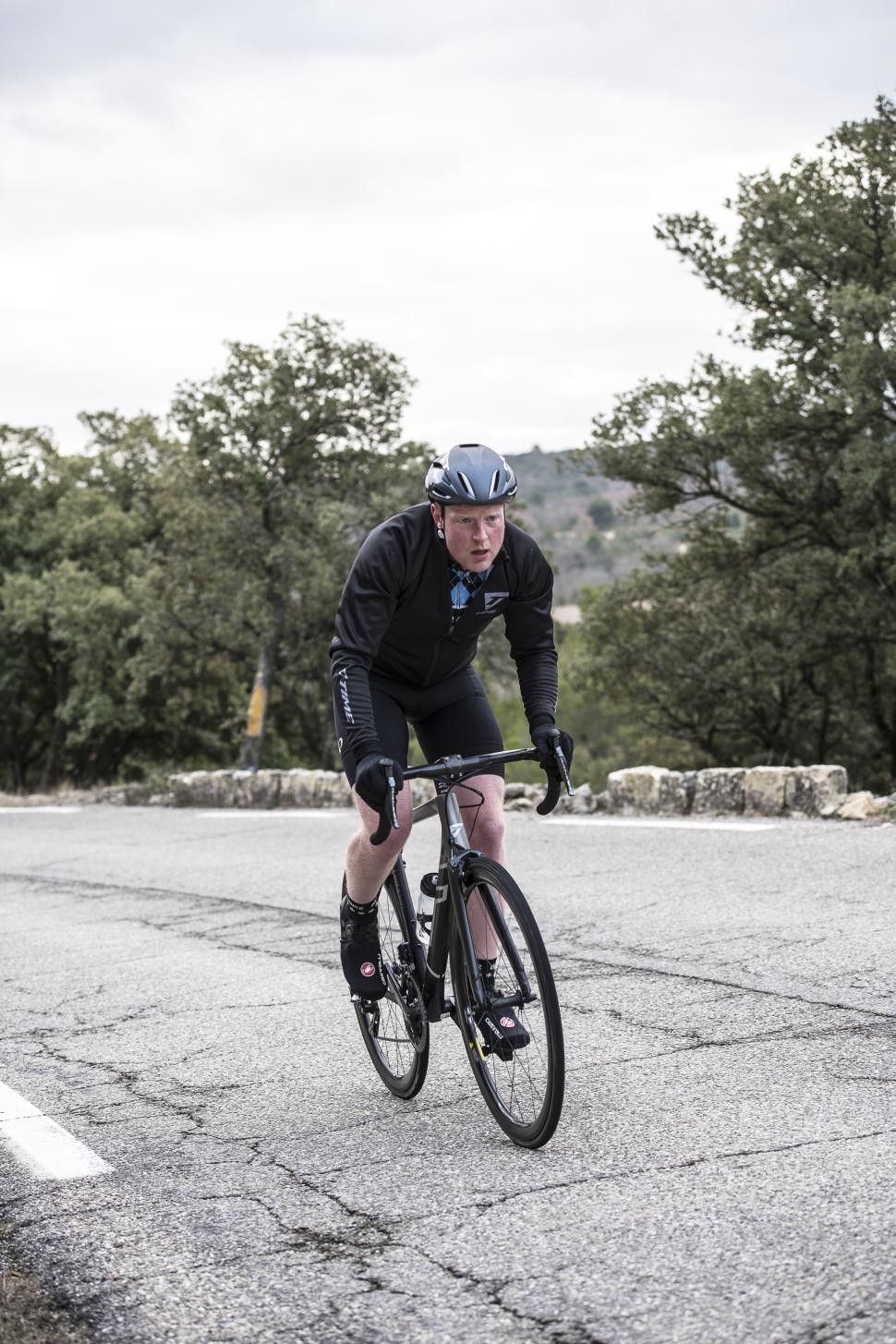 I understood Time's distinction between 'endurance' and 'altitude' bikes a little better after the test ride - this is pretty much a very light all-out racer. It's reasonably forgiving and comfortable but is built for being hammered through the mountains and chucked down descents with confidence, not pootling around. Granted 6.2kg for a medium bike with an unpainted frame isn't the lightest bike ever made, but it's a case of function over form (even though it happens to look very handsome indeed in my humble opinion). Time's use of Vectran fibres, the new seatpost and Aktiv fork are examples of how the Alpe d'Huez is optimised to be as strong and stiff as possible, and if this adds fractions of weight then having ridden it, I think it's quite negligible that it's not Trek Emonda-light.

The Alpe d'Huez is also available in a trickle-down version, the 21 (shown below). Although I didn't ride it personally, others I spoke to on the launch who did reported that you could tell the difference in weight (the components would have played a part here too) and it's not quite as direct with a standard seatpost, but is still a lovely bike to ride. The most affordable Alpe d'Huez 21 is available for £2,995 with a mixed Ultegra groupset and Mavic Aksium hoops, and I think it's well worth a look if you can't justify £4.4k plus for the premium 01 version. 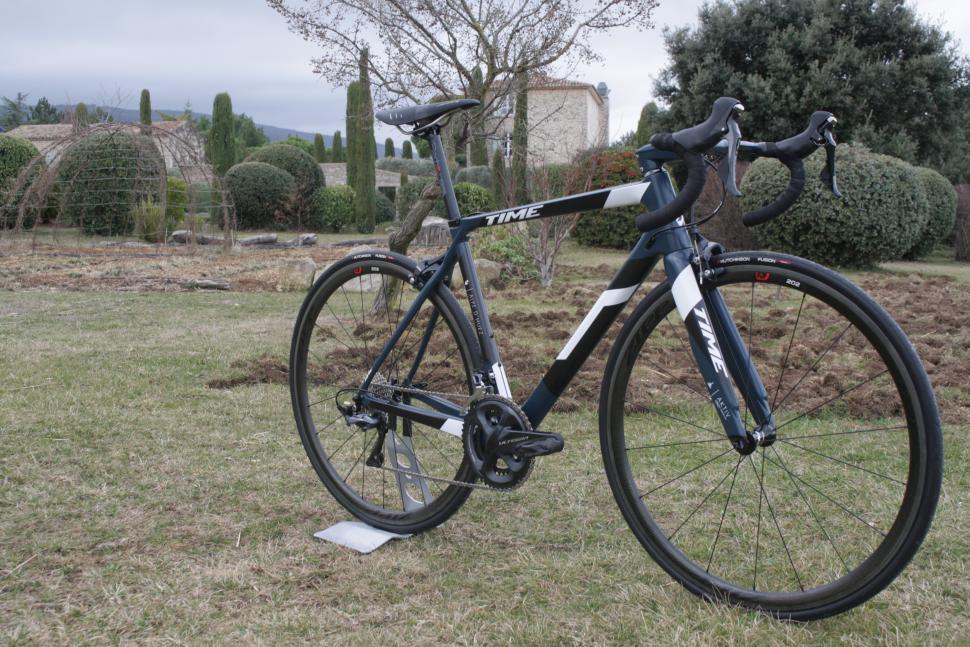 We'll be hoping to get an Alpe d'Huez in for testing over the coming months, so keep your eye on the site. If you want to experience riding a Time frame, there will be a small selection at our upcoming BikeLive demo events, dressed with Pirelli PZero Velo tyres. Click here for tickets.