The Rove was launched back in 2013 right at the beginning of the whole gravel grinding trend kicking off and spreading its reach far and wide, with cyclocross DNA but modified for better road handling with a lower bottom bracket, space for wider tyres and additions like disc brakes and rack and mudguard mounts.

First launched with a titanium frame, for 2018 Kona has completely revamped the Rove and built the top three models around the highly fashionable right now 650b wheels and tyres, with a choice of a Reynolds 853 frame on the range-topping model alongside two more affordable aluminium versions. Meanwhile lower down the range there are five versions of the Rove rolling on 700c wheels, but we’re going to focus on the 650b bikes in this article because we think they’re the most interesting. Why 650b? “The extra air volume in this new generation of urban and mixed-surface tires means they can be run comfortably at lower pressures while still rolling quickly on a variety of surfaces. It’s the best of both worlds,” explains Kona.

We’ve seen 650b become popular on many of the newest adventure bikes with cross-compatibility between 650b and 700c wheels becoming the norm, allowing cyclists to experiment with the fatter smaller diameter tyres. Of course, the new Rove will happily take 40mm tyres on 700c rims as well, but it seems the 47mm WTB Horizon tyres better suit the all-road intention of this sort of bike well. 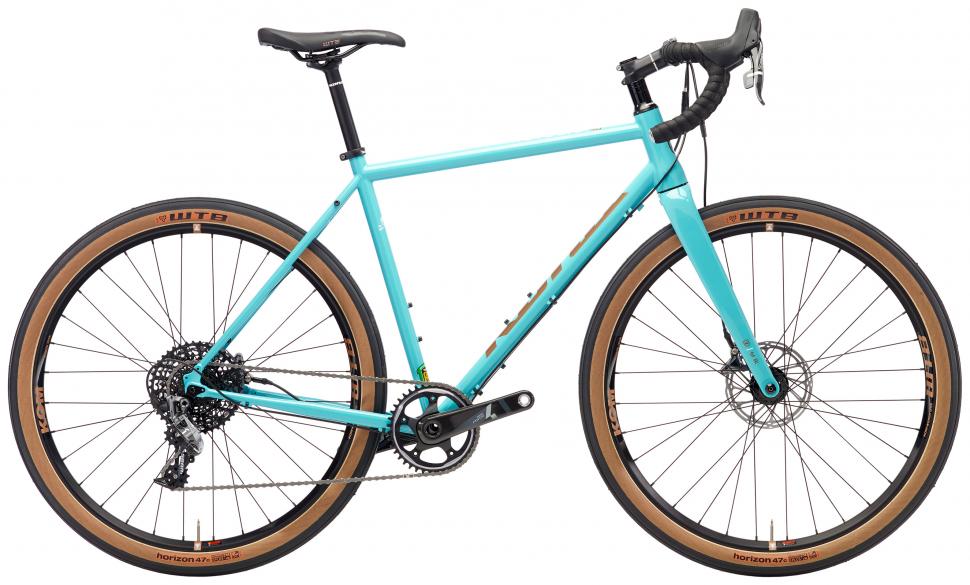 The range-topping Rove LTD (£3,495) features a frame made from Reynolds 853 butted tubing with a full carbon fibre fork, with clearance for the 47mm wide WTB Horizon 650b tyres it comes specced with. There’s a tapered head tube for extra front-end stoutness and it has an externally threaded bottom bracket - that's common across the range, a sensible choice on this sort of bike. Disc brakes are flat mount and thru-axles are 12mm and cables are externally routed, and there are three bottle cage mounts, the third located on the underside of the downtube. A SRAM Force 1x11 drivetrain is an obvious choice for this style of bike, with hydraulic discs and a wide-range 10-42t cassette. Underneath the Rove LTD sits two models that share a new aluminium frame, the Rove NRB DL (£1,995) and Rove NRB (£1,595). NRB, by the way, apparently stands for neo rando bike, and offers some suggestion for the style of riding Kona has in mind for these bikes. A 6061 butted tubeset shares the same key details as the steel frame, except for the gears cables being internally routed, but there are the same tapered head tube and carbon fibre fork, 12mm thru-axles and flat mount and mudguard and rack mounts. Kona is probably best known to some readers as a mountain bike brand (its skinny steel tubed Cindercone was an iconic bike in the 90s) but it also boasts a long history producing cyclocross and touring bikes, and this pedigree shines through in the updated Rove which boasts many practical and versatile design flourishes that should ensure it can be a worthy contender on any new bike shortlist. Last year Mike tested the Roadhouse which he said “ticks a lot of boxes as a do-it-all-machine” and we’ve got a Rove coming in for review soon. It’ll be interesting to see how it performs and compares.