A couple of years ago Pinarello worked with Team Sky and Bradley Wiggins to launch the K8-S, a bike which coupled flexible chainstays with a small damper at the top of the seat stays to provide a bit of extra cushioning for riding over cobbles.

This week it has just launched the new Dogma K10S Disc, an evolution of that original bike with the DDS 1.0 damper upgraded to eDSS 2.0, which provides the added benefit of electronic control and adds disc brakes to the mix. The bike has already been spotted in the wild, without disc brakes, Team Sky’s Ian Stannard was spotted riding the prototype bike. 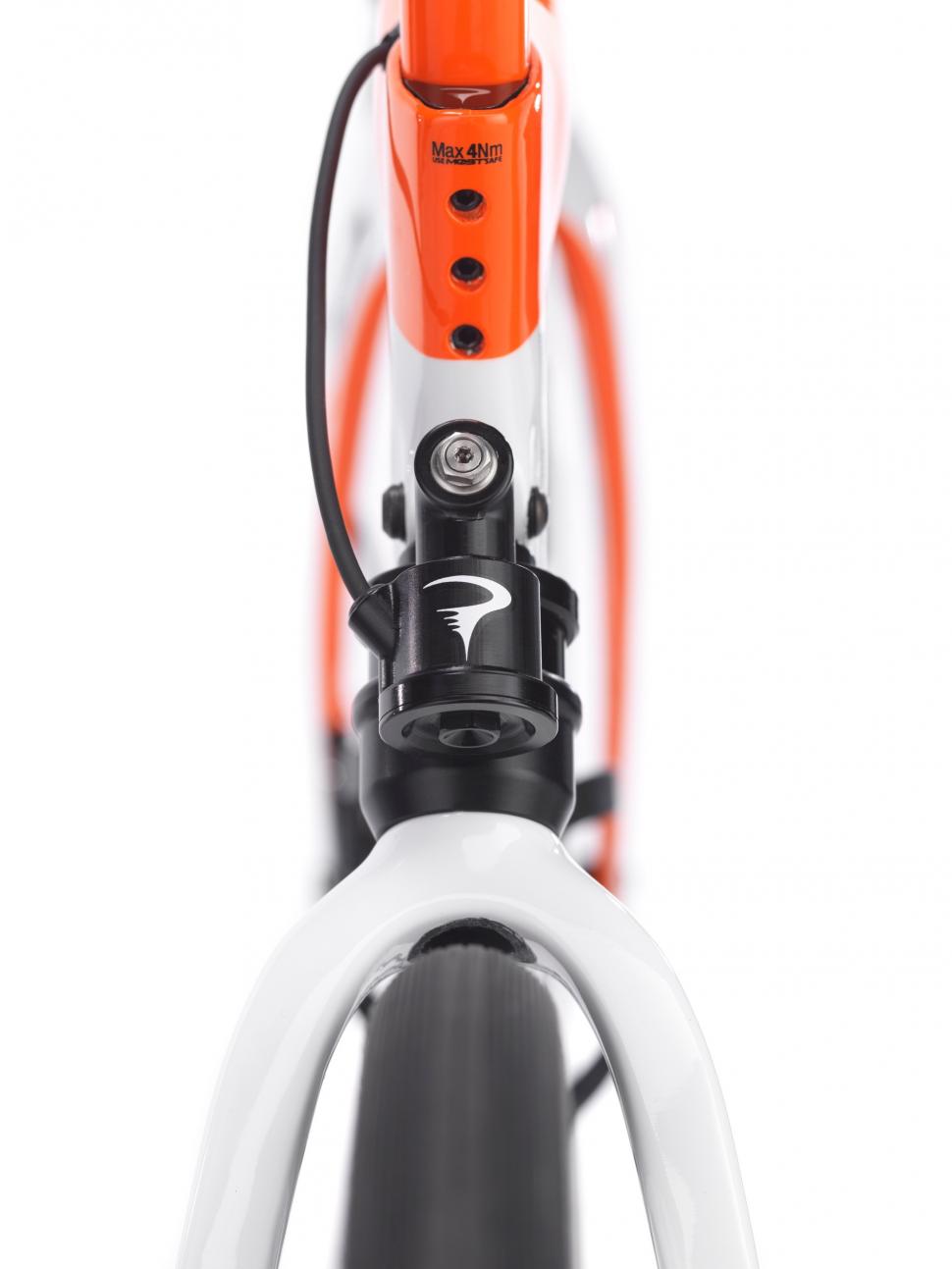 The 1cm of available suspension travel, achieved via an elastomer spring and hydraulic damper, can now be locked out for smooth road sections and activated when the going gets rough. The previous bike offered adjustment but not on the move. As well as simply locking and unlocking the suspension, you can also choose between a firm or softer setup to suit the road conditions.

Pinarello partnered with a suspension specialist company called HiRide to develop the electronically adjustable suspension. There are six axis accelerometers and gyroscopes that are able to take feedback from the road and adjust the damper unit accordingly. Pinarello says it’s able to read the road and understand the bicycle dynamics and lock and unlock the suspension in real time. 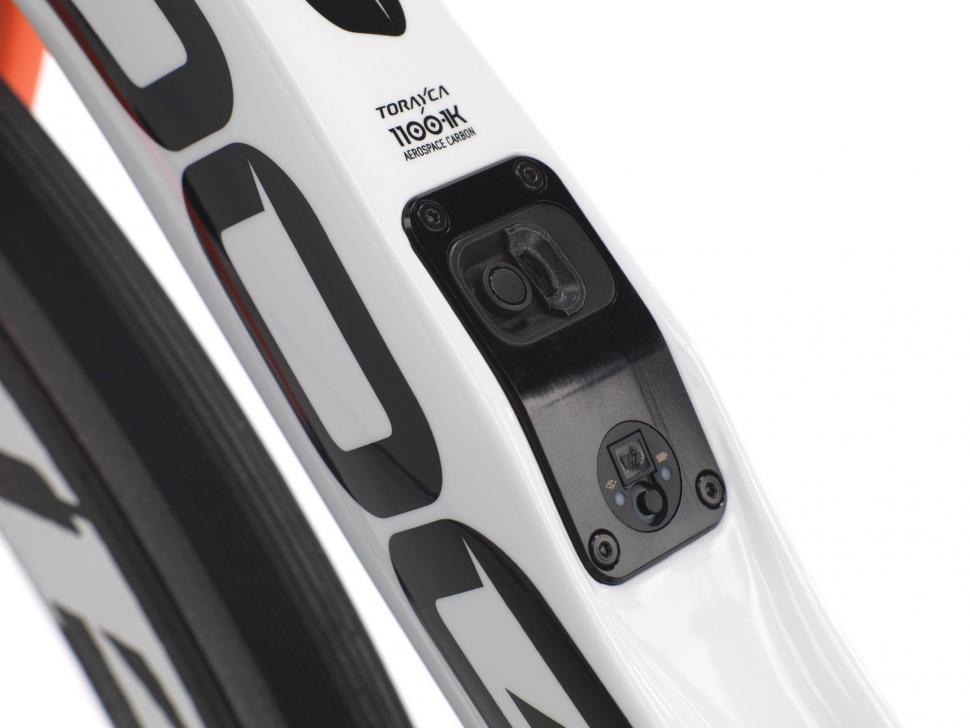 Alternatively, the suspension can also be controlled via a Garmin Edge computer with a dedicated app the bike company has developed. This allows you to control the suspension from the handlebars which is more appealing for rides where you’re constantly swapping the rough for the smooth, such as Paris-Roubaix with its short sections of cobbled roads.

“I am very happy with this new and ambitious project that PinarelloLab developed with the collaboration of HiRide. The introduction of an electro-hydraulic control system establishes an important step forward in the technological evolution of our bikes, improving performance and increasing safety,” commented Fausto Pinarello.

Away from the suspension, the K10S Disc gets the same updates that the recent K10 rim brake model also received, with changes trickled down from the F10, Chris Froome’s race bike. There’s the same Flatback shaped downtube which now also houses the Di2 junction box for easy access and neater packaging, in what Pinarello is calling the E-link port. On the K10S Disc the controller for the rear suspension is also located in this port. The electronics are powered by a battery pack housed somewhere in the frame, connected to the shock via a cable. 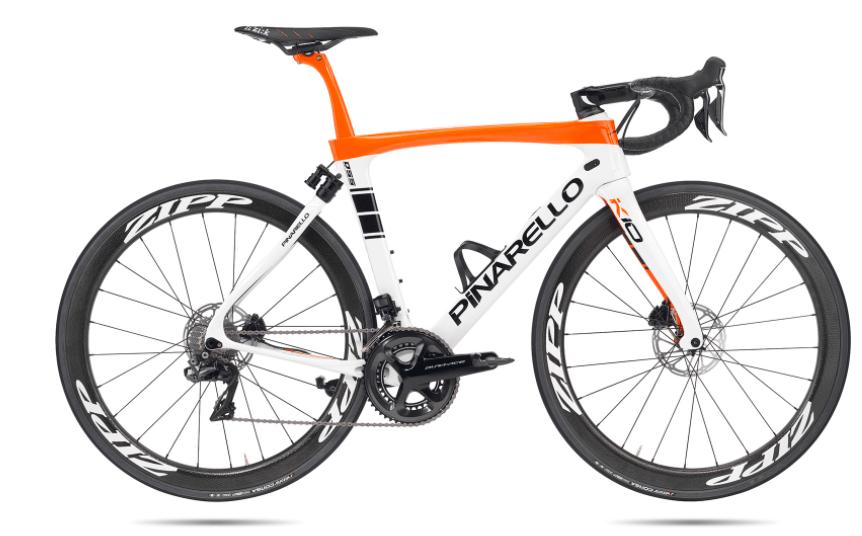 The geometry is typical endurance bike stuff, with a longer fork rake, slacker head angle and longer wheelbase via stretched chainstays. There are thru-axles front and rear and flat mounts for the disc brake calipers. Tyre clearance is increased, it’ll take a maximum of a 28mm tyre.

The endurance bike market is an interesting one at the moment, with some quite different approaches to offering the necessary smooth ride that customers of these bikes crave. They’re also bikes developed by and for pro riders to tackle the cobbled classics, leading to some interesting developments like the Specialized Roubaix and Trek Domane, the former with a spring in the head tube and the latter with a pivoting seat tube and flexible steerer tube.

And then there are bikes like the Cannondale Synapse and Giant Defy that steer clear of suspension in favour of working with tube shapes and carbon layup to provide targeted deflection. What’s clear is that there are different bikes that will suit different requirements and tastes. The Pinarello system sounds a smart system on paper but does introduce a level of complexity that might not appeal to everyone, and we can’t help wondering how the front end smoothness will compare to the back half of the bike. We're certainly keen to get a ride on it to see how it does ride.