Since it was first introduced in 2003, the Tarmac has gone on to win many of the world’s biggest bike races, and in the process win over many consumers with its blend of performance, handling, weight and stiffness. Specialized has evolved the bike over the years, and the last few models have shared a clear design direction. The new bike signals a radical change of direction. Today Specialized has launched the new Tarmac SL6, the sixth generation model, with a drastically lighter frame, the US giant claiming 733g for a 56cm, some 200g lighter than the outgoing Tarmac SL5. It’s also more aerodynamic, thanks to the company’s own Win-Tunnel which was used in the development of the new frameset, the company claiming it’s 45 seconds faster over 40 kilometres than its key rivals, such as the Trek Emondo or Cannondale SuperSix Evo.

The Rider-First Engineered approach of size-specific frame design first introduced on the previous Tarmac has been refined. Specialized reckons the new approach “means that all riders, both men and women, will get to experience the same razor sharp precision that the Tarmac is known for.”

The original goal with Rider-First Engineered introduced on the previous generation Tarmac was to step away from the previous approach of developing a 56cm frame, and simply sizing it up and down to get the six or seven frame sizes. Specialized isn't the first to have adopted this idea, other bike brands have been doing it for a while. Where before Rider-First Engineered was focused simply on handling, the new approach sees Specialized honing the stiffness, weight and aerodynamic efficiency of every aspect of the frame for each of the seven sizes it is offering of the new men and women’s Tarmac. In essence, it has sought to take more than just handling into consideration, and looked also at the weight and aerodynamic efficiency for each size frame.

Specialized says it set itself the goal of better meeting the "extreme" needs of the professional riders, and it has applied its partnership with McLaren Applied Technologies to develop and refine the carbon fibre layup, with ply-by-ply analysis, and backed up this development with its own in-house wind tunnel and CFD testing.

That development has led far more complex carbon layup than the previous Tarmac frame, with the number of pieces of carbon used to construct a frame rising from 350 to 500, reducing the overlaps between each carbon ply and resulting in the lower frame weight. A massive 200g has been save over the old Tarmac, without losing any of the stiffness of the previous frame, which is impressive in this day and age of increasingly marginal gains.

Specialized has also refined the shape of the tubes. The old Tarmac had a fair few curves, but the new Tarmac SL6 has much straighter tubes and shapes. It has scaled down the diameters of the tubes because smaller tubes are lighter. Specialized reckons that days of “oversized stiff” are over, because larger diameter tubes mean more surface area for a given wall thickness, which means more weight. 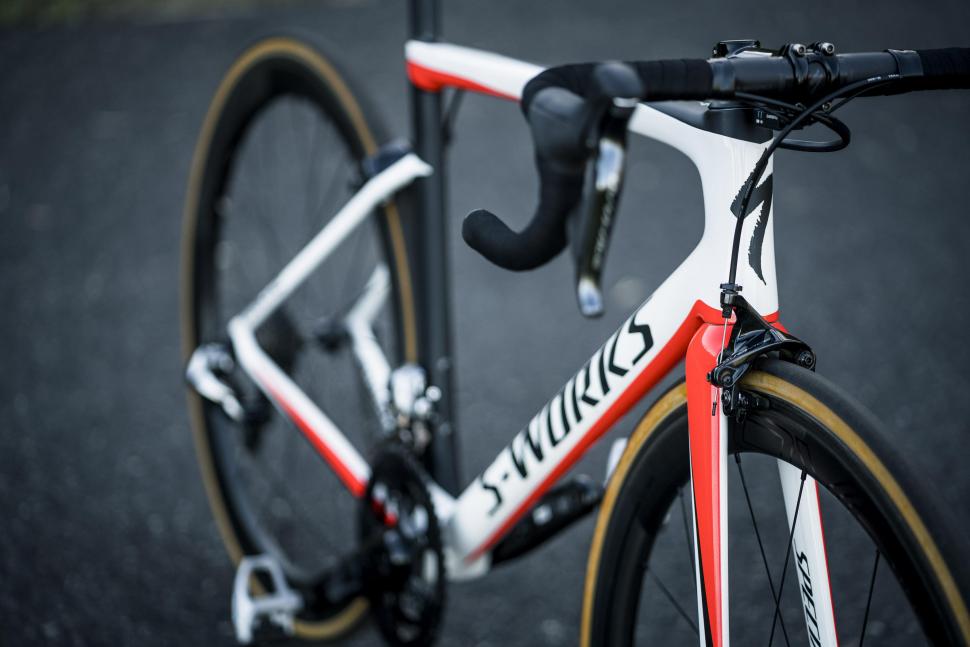 The top tube is now much straighter, the chainstays are straight and rounder, the downtube is a smaller diameter, and the cable routing has been simplified. Even the paint has been put on a diet, with a proprietary process adding just 10g to the frame. This weight saving process will be limited to the first 500 frames produced, however, so be quick if you want one of these super light Tarmac Ultralights.

Another result of this development is the use of three new forks across the size range. Each fork uses a 1.5in lower bearing, reducing any harsh angles of carbon fibre flowing from the fork crown to the steerer tube, and the taper of the steerer tube is different depending on the stiffness requirements. The fork blade dimensions also vary across the three forks. “By co-optimizing around all of our different performance targets, we were able to achieve an overall system performance that would be unobtainable without looking at them simultaneously,” he says.

“Think about the target performance that we wanted to achieve like the peak of a pyramid. There are different competing sides, whether it’s weight, handling characteristics, or aerodynamics. Developing every feature on the new Tarmac was an exercise in finding that peak—there are tube shapes on the bike that, with a sub-millimetre change, would cause the system performance to fall off that peak and result in a bike that is several watts less aero, several grams heavier, or would compromise handling performance. We applied this approach to every design element and engineering decision on the Tarmac.”

Here are the three different forks:

So far we’ve learned that the Tarmac has a much more complex carbon fibre layup resulting in a significant weight saving. But shedding weight hasn’t been the only change, it’s also more aerodynamic than the old bike, with lessons learned from the Venge ViAS applied to the Tarmac for the first time. 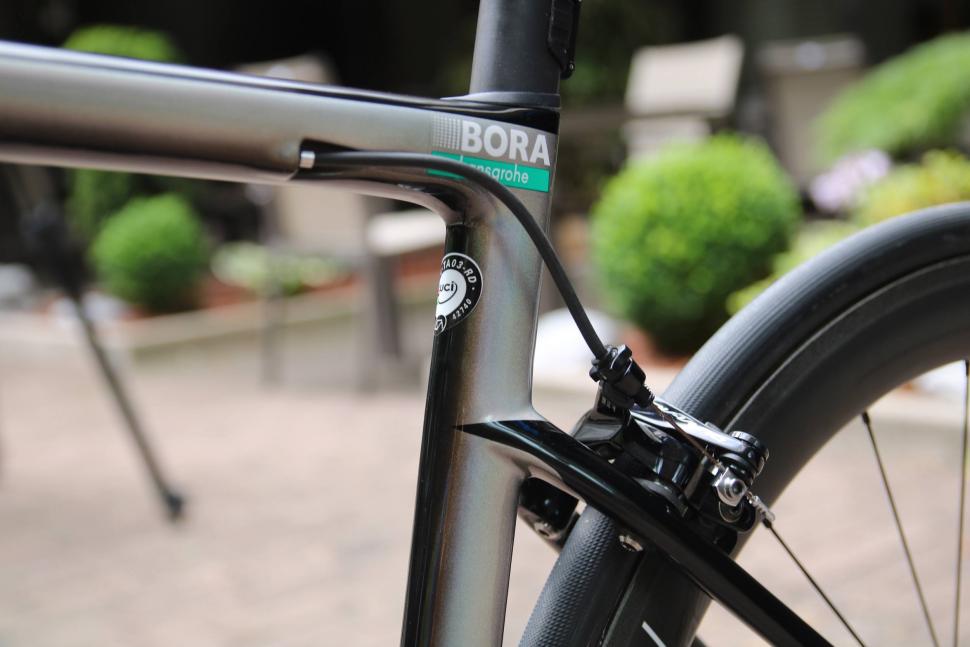 The goal was to “add aero for free” says Specialized, so it has only added aero where it doesn’t add weight or alter the stiffness. An aero bike like the Venge has tubes designed primarily to be aerodynamic at the expense of weight and stiffness, but it has taken the opposite approach with the new Tarmac. It claims it’s the lightest aero road bike currently available, lighter than some so-called lightweight bikes and nearly as aero as some dedicated aero bikes.

So there’s a new fork, dropped seatstays reminiscent of the Venge and Shiv TT bike, and a D-shaped seatpost and seat tube. Specialized claims the changes see the new Tarmac being “approximately 45 seconds faster over 40 kilometres compared to other lightweight bikes in the same weight category,” their claim not ours. Or to put it another way, it's the equivalent to upgrading to 50mm carbon deep section wheels from traditional box section wheels. 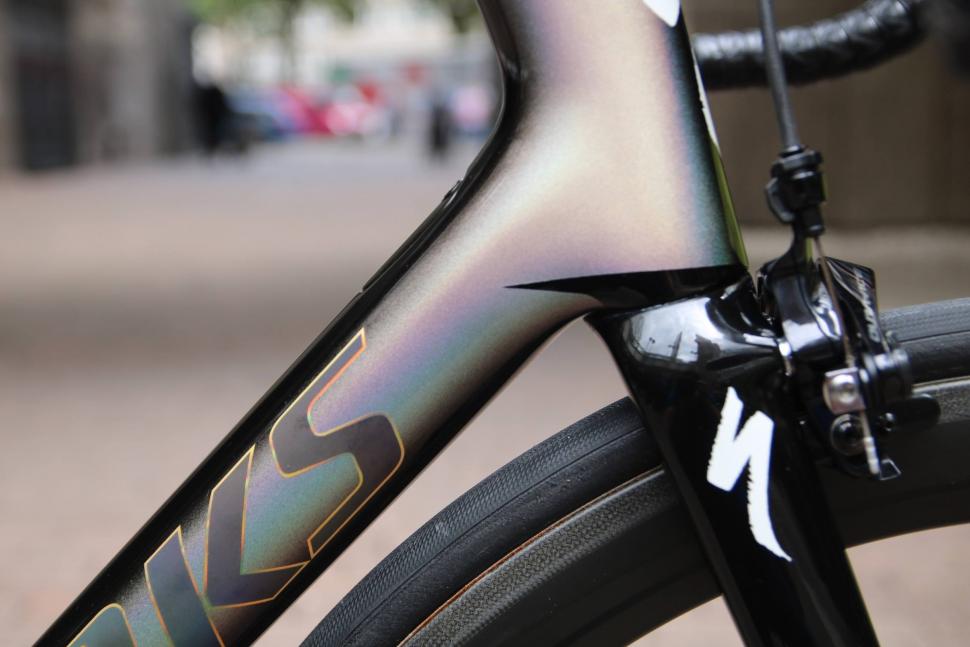 The new fork, which we already know comes in three steerer tube dimensions across the size range, also has truncated airfoil shaped blades. The crown height has also been lowered to reduce the frontal surface area, a move enabled by the switch to direct mount brakes. The switch to direct mount brakes always allows increased tyre clearance, up to 30mm Specialized tells us.

Increasing comfort has been another goal with the new Tarmac. Firstly, the new bike is specced with 26mm tyres but we're told it'll accomodate 30mm tyres, so that's one step towards extra cushioning from rough roads. Those dropped The D-Shaped seatpost and seat tube is a big change for the new Tarmac. The change brings about an obvious aerodynamic benefit, with the truncated airfoil shape reducing drag, but it also lends the new Tarmac improved seated comfort over the old model. Specialized has also optimised the carbon layup to provide extra flex in the top 120mm of the seatpost.

The geometry of the previous Tarmac was always well received in bike tests and by consumers, but Specialized has refined it, utilising Retul and professional rider input to provide a more responsive ride. The key change is a shorter wheelbase to provide “instantaneous response and optimal power transfer.”

It is also sharing the Tarmac platform for men and women, no longer is there’s just a men’s version of the Tarmac, now there is a men’s Tarmac and a women’s Tarmac. It says it has  “put the way people ride ahead of their gender,” and has developed overlapping geometries that serve the riders regardless of their gender. 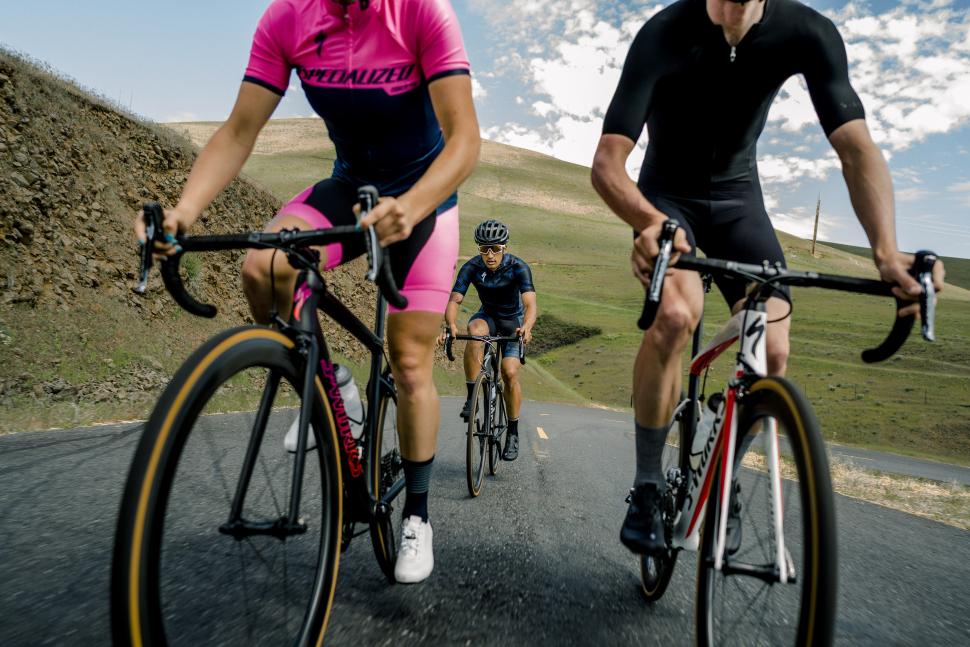 “In an effort to serve all riders better, we have created a shared geometry that expands the fit range of the Tarmac platform and accommodates a greater percentage of competitive road fits while providing the sharp and precise handling riders expect from the Tarmac,” explains Specialized.

In doing its research, Specialized says it discovered there were no different stack and reach requirements for men and women, but instead, there’s a need to accommodate the different genders with handlebar width, crank length and saddle preferences. So those finishing parts are the key differences between the men and women’s Tarmac.

The new Tarmac SL6 will be available in six builds and four frameset options, and the range will be topped up by the previous Tarmac SL5 at lower pricepoints. The Tarmac SL6 range starts at £3,450 and rises to £9,500, with the range-topping being the Ultralight version with the special 10g paint finish.