Cycling App of the Week: Fill That Hole

Seen a nasty pot on your route? Want it fixed sooner rather than later? Fill That Hole is an app that could make it happen…
by Jack Sexty

FillThatHole.org.uk is provided by the Cycling UK charity (CTC), and was launched in 2007. It was originally developed for cyclists, who are obviously at greater risk of injury from potholes, but it's now used by all types of road user, from delivery drivers to motorists worried about pranging their vehicle. Since an app was launched in 2010 it's become more widely used, and all users need to do is fill out the short questionnaire provided by the app and add a photo of the pothole to notify the local authority.

The app interface is simple - add a description of your location, name the hazard type (you can also report debris, poor roadworks or uneven manholes), and give the estimated size, depth and distance from the kerb of the hazard in question. The Fill That hole website shows that just short of 7,000 hazards have already being reported this year by users, and they also rate local authorities' response to the reports. Islington currently top the table, fixing 825 of 985 reported, and Blaneau Gwent foot the chart fixing none of the 20 reported hazards on their roads.

Why is it unique?

It's a one-stop shop for reporting potholes, and is probably the best way to get the message across to the council short of press attention or protesting! Providing there's somewhere safe to stop and take a photo, you can have a pothole reported mid-ride quickly and easily.

Fill That Hole achieved something prestigious and seemingly unlikely in 2010, when CCT actually received funding of £30,000 from the Department for Transport to develop an Android version of the app and revamp the website to make it more user-friendly - showing how important and well thought of Fill That Hole is by the government. 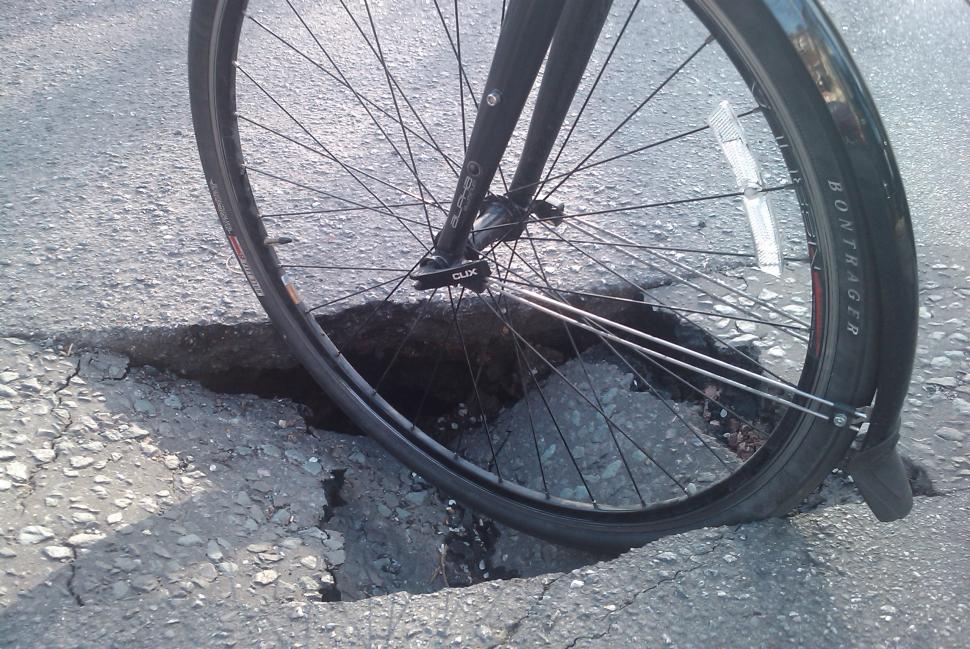 The app makes it easier to report craters like the one above, notifying the council of road sections in need of urgent repair

At its best, Fill That Hole could help you and other cyclists ride on safer, smoother roads due to the extra public pressure put on councils to repair potholes. There's varying levels of success in our own experience, but of course this depends on how receptive your local council are to the advice and how many people report the offending pothole. Roads in need of repair is an ongoing issue and one that many cyclists in the UK wish was tended to more efficiently, but Fill That Hole is certainly a useful tool towards ensuring dangerous potholes can't be ignored by the council.

Fill That Hole is available on iOS and Android – you can also use it on desktop via the Fill That Hole website if you don’t have the app at hand, where you can click through to Cycling UK's main website and join if you wish.