Kinesis launches £699 Tripster AT, we take a first look at the key details
by David Arthur @davearthur

The new Kinesis Tripster AT is here.

Based on the popular Tripster ATR but trading titanium for aluminium, the new frameset costs £699 and a SRAM Rival 1 build comes in at £1699, making owning an adventure bike a lot more accessible than many of its rivals.

Geometry is based on the Tripster ATR so the wheelbase is longer and the headangle slacker than a regular road bike. Tyre clearance is generous, easily accommodating 700 x 45c or 650b x 52c tyres with plenty of space to spare. It’ll also take a 40mm tyre when using full-length mudguards.

Kinesis UK has good form for producing advanced aluminium frames without hefty price tags. The new Tripster AT continues that trend. A curved hydroformed down tube boosts stiffness - this is a frame designed to be tough when loaded up with luggage - a neat chainstay yoke ramps up tyre clearance and there’s full internal multi-port routing for mechanical and electronic groupsets.

The frame also features rack mounts and hidden mudguard eyelets, as does the full carbon fibre fork, though it’s likely most potential buyers will be looking to the growing market for bikepacking bags if eyeing up this bike for a multi-day event. The frame has designed to allow more space for a frame pack, with two positions for the downtube bottle cage, and a third bottle cage mount on the bottom of the downtube.

Kinesis has adopted the latest flat mount disc tabs and thru-axles, 12mm at the front and 142x12mm at the rear. The rear dropouts are also compatible with conventional mech hangers or the new direct mount that Shimano has been using on its mountain bike mechs for a few years, and has just added to the latest Dura-Ace. Another important detail is the threaded bottom bracket.

“It is a truly versatile frameset that is as at home on the commute as it is UK bridleways or the biggest of rough-road adventures. It’s a bike to inspire the fast-growing desire for bike packing and offers true versatility for self-build projects, upholding the Kinesis UK moto ‘Dream-Build-Ride’” says Kinesis UK. 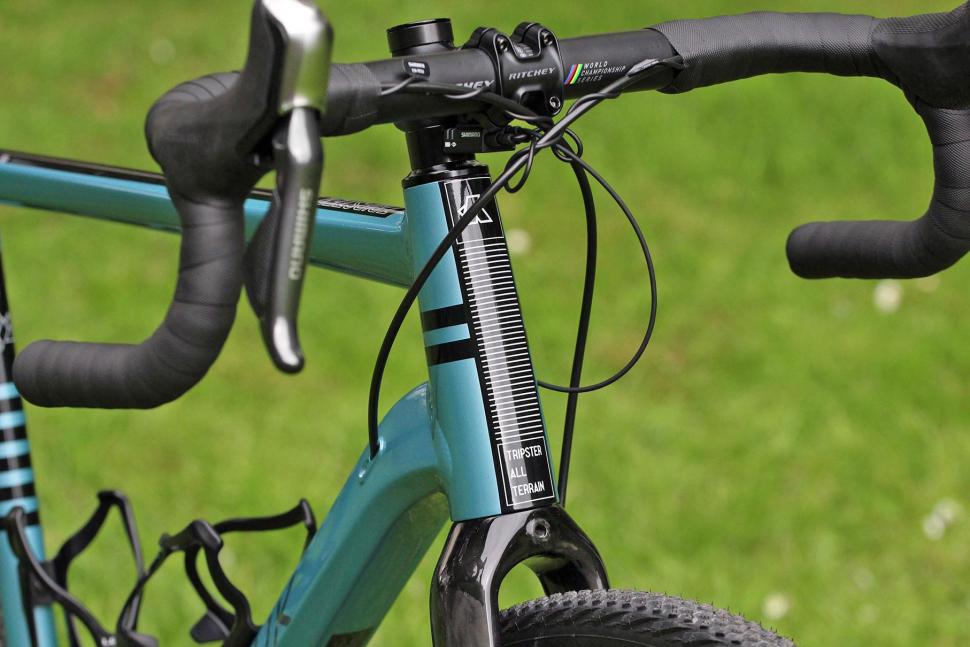 The late Mike Hall was involved in the development of the frame. Kinesis UK tells us it was to be the starting point for a more involved relationship working on his own bike design ideas. His bikepacking experience led to the addition of the third bottle cage and the flattened top tube, intended to better stabilise a frame pack. He was also involved with the graphics, the headbadge positioned so as not to be obscured but we love the spot tracker design on the bottom of the down tube.

Then there are the two colours the new frame is available in, Arran Blue and Seeon Yellow. A lot of thought and consideration has gone into each colour. The former is inspired by the colours of the Isle of Arran (the location for the inaugural Grinduro in July), and the latter was inspired by a desire to provide a neon bright colour that will ensure you’re seen in any light and on any road.

So the frame and fork will cost £699 and a SRAM Rival 1 build is going to be £1,699. That's not what we've got, Kinesis UK has put together a one-off build to allow us to test the new Tripster AT.  While it's not a standard build it's offering, it's not inconceivable that you or a Kinesis dealer could replicate this build. Shifting comes from a Shimano XT Di2 mountain bike rear mech operated by R785 Di2 shifters, with the buttons programmed to provide sequential-style shifting - the front buttons shift down the cassette, the left buttons up the cassette. The cassette in question is an 11-42t 11-42t Shimano XT item mated to a 40t Praxis Wave Tech chainring on an Alba chainset, with external bottom bracket bearings.

The Wave Tech chainring uses an alternating teeth pattern as an alternative to the narrow-wide introduced by SRAM on its first 1x11 groupset a few years ago, and also adopted by Shimano. The idea of the alternating teeth pattern is to prevent the chain derailing, but the clutch mechanism in the XT rear mech should ensure that never happens. If you do need to refit the chain, there’s a visual guide on the chainring for correctly fitting the chain. 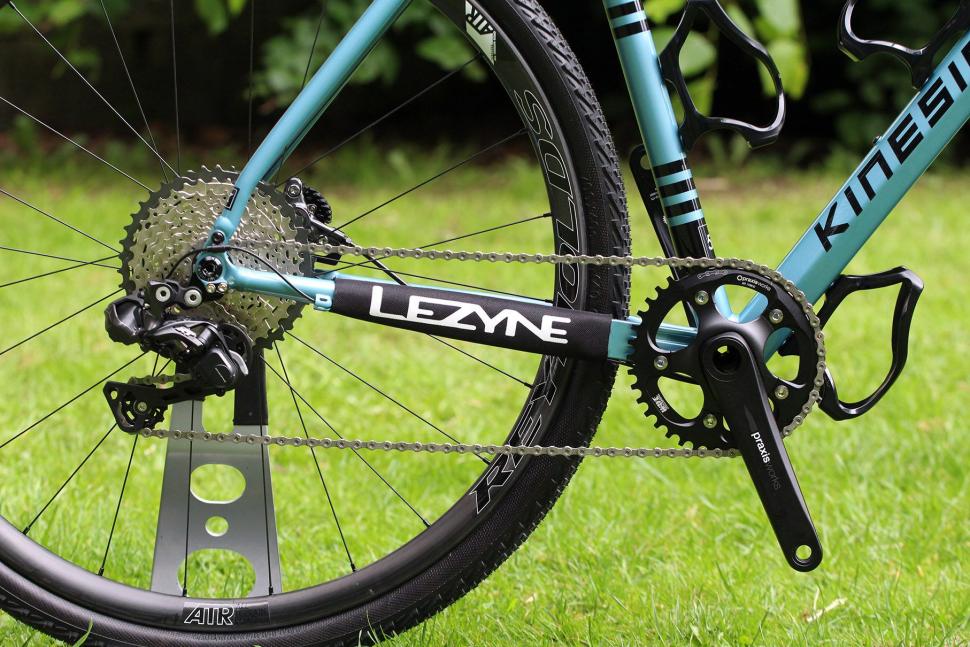 In case you're wondering, the brakes are post mount instead of flat mount simply because of availability issues with the latter when Kinesis were building the demo bike. It's finished off with Reynolds ATR carbon fibre clincher wheels with VeeTire Rail 40mm tyres, and a smattering of Ritchey parts, including the handlebar, stem and saddle.

The new bike will be on show at the Adventure Bike Festival in the Lake District this weekend and at the Distance, a new self-supported bike-packing event sponsored by Kinesis in June.

It's available to pre-order now with first stock arriving in July. More info at www.kinesisbikes.co.uk/Catalogue/Models/Adventure/Tripster-AT