microSHIFT have been on the fringes of the big three groupset brands for a number of years, and are back with their latest 11-speed effort...
by Jack Sexty

If you’re not familiar with microSHIFT they were founded in Taiwan in 1999, starting with twist-type shifters for MTB and then making their first dual control levers for road in 2007. The Centos 11 is one of two 11 speed groupsets microSHIFT currently offer, the other one being the quite unfortunately named Arsis 11 which is a higher end groupset pitched in between Ultegra and Dura-Ace if we’re to use Shimano as a comparison. For that you get slightly lighter components with added carbon in the levers and rear mech.
Another plus point of using microSHIFT is that they are compatible with Shimano components, so you can mix and match if you just want to use microSHIFT levers, for example. 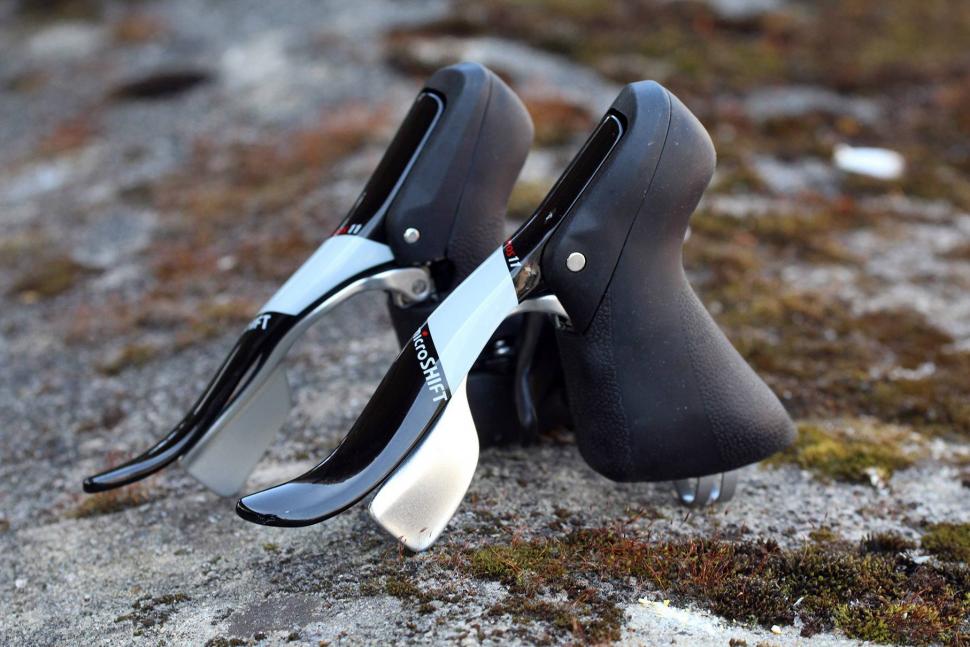 microSHIFT do genuinely offer something different to Sram, Shimano and Campagnolo, which is mostly to be seen in the levers. The thumb clickers are pretty sizeable, and perform single shifts. The big paddle performs simultaneous shifts, and you can do four shifts up and three shifts down with just one push of this big lever. Campagnolo’s groupsets offer a similar system whereby you can perform multiple shifts, but you can do this from the thumb buttons on theirs - so you could say microSHIFT are straddling between Shimano and Campag with this mechanism.
The rear mech weighs 194g which is actually a single gram lighter than an Ultegra 6800 rear mech. This is made with all aluminium, as is the front mech which weighs in slightly more than Ultegra and 105’s at 95g.

There’s been quite a few groupset announcements in the last twelve months, including FSA’s new electronic groupset, a new mid-range Campagnolo offering and sightings of an update to Shimano's all-conquering Ultegra, so it's fair to say there’s a lot of competition in the road market at the moment. Is there a place for microSHIFT? We’re going to put some miles into the Centos 11 and report back to see if this is the real deal, but on first impressions and the performance of the previous 10 speed version, it’s looking promising so far...

**Edit... when we shot the video we had no information on pricing for the Centos 11, however later that evening we heard back from microSHIFT's distributor - the shifters have an RRP of £197.99, the rear mech £48.49 and the front mech £31.99... which is comparatively cheap as chips!

For more tech videos, check out our YouTube channel