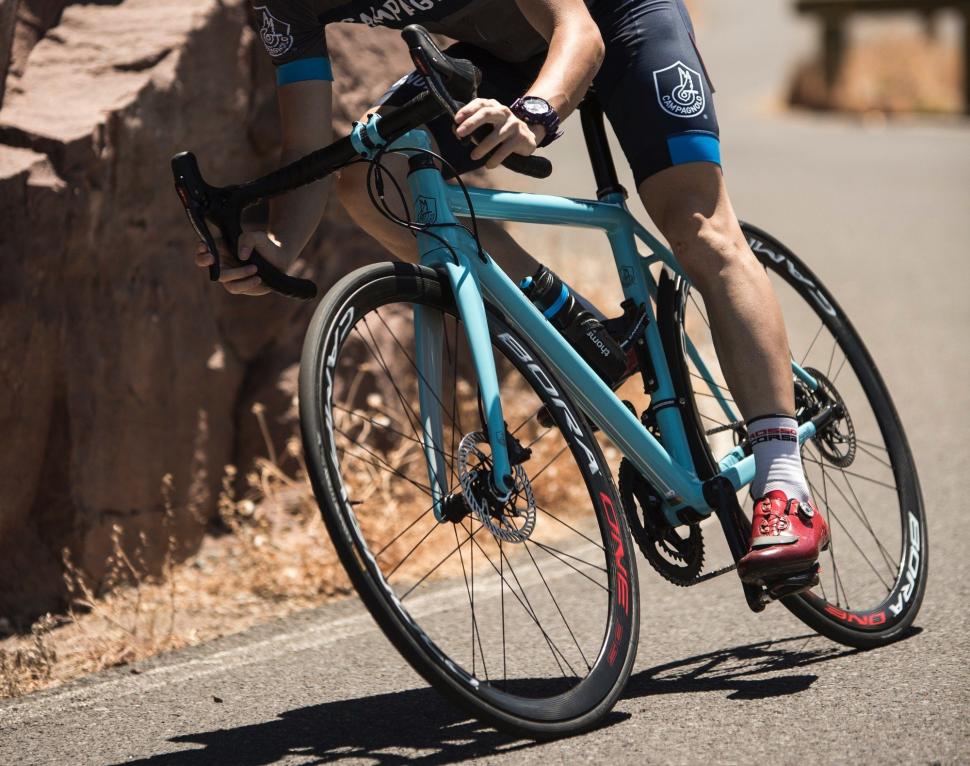 Let’s go through them in turn.

With the introduction of its disc brakes, Campagnolo has clearly needed to extend its lineup to include disc compatible wheels, hence the Bora One DB.

Campagnolo already has the Zonda Disc wheel with an aluminium rim, but it probably wouldn’t be the first choice of someone buying a top-end Super Record groupset.

The Boras have been Campag’s top level rim brake wheels since 1994 – periodically updated – but the Italian brand says that the technology has been revised hugely for the disc brake model. For a start, Campag hasn’t simply laced an existing rim onto a disc brake hub – there’s no brake track on this rim. What you get is a a 24.2mm wide full-carbon rim, optimised for 25mm and 28mm tyres, available in depths of both 35mm (tubular and clincher) and 50mm (tubular only).

Campagnolo says that while the aerodynamics of the rim profile are nearly identical to those of the rim brake wheel, the internal structure has been modified greatly because the forces applied by disc brakes are very different. A manufacturer can save weight because there’s no need to add the extra material required for a strong and durable braking surface, and a disc brake rim doesn’t need to cope with the high temperatures generated by brake pads rubbing on the carbon, so you can use different resins. Plus, disc brakes don’t apply equal force to each side of the wheel.

“These asymmetric forces, in addition to the asymmetric layout of the disc hub to create space for the rotor, make not only a new carbon layup necessary but also call for modifications to the overall structure of the wheel,” says Campagnolo. “To render an asymmetric unit more symmetric in performance, the Bora One DB incorporates a modified version of the famous G3 spoke pattern on the front wheel as in addition to slight modifications on the rear wheel as well.” G3 means that spokes are spaced in groups of three with two attached to one side of the hub and one to the other. On the front wheel, a total of 16 bladed spokes go to the rotor side of the hub, with eight going to the driveside of the bike.

The rear wheel, which has to cope with the forces of the drivetrain as well as those of the disc brakes, has 16 spokes fixed to the driveside and eight fixed to the disc rotor side. 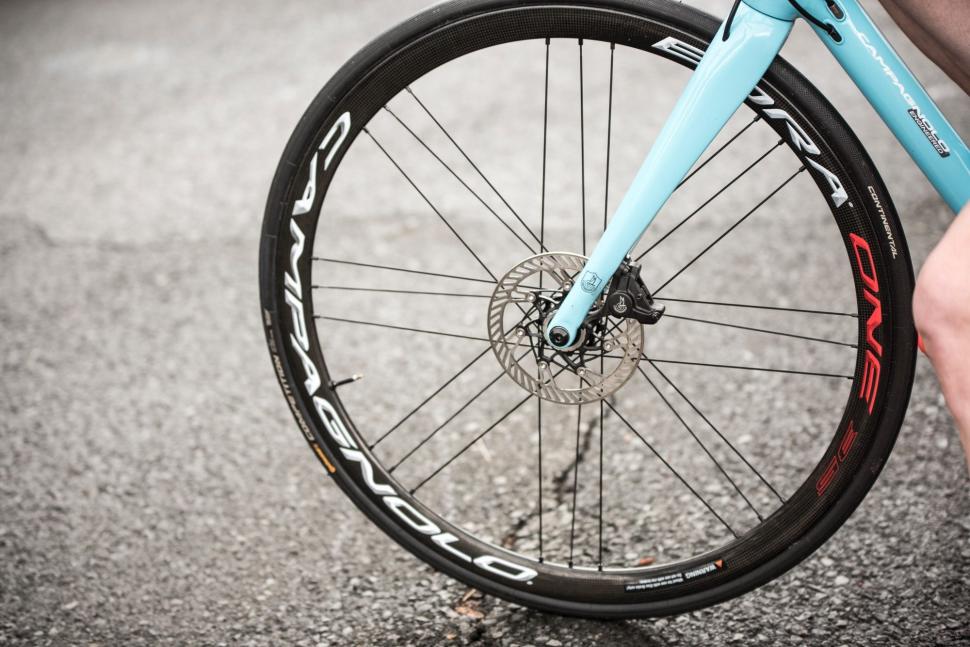 Several of the rim brake Bora’s technologies have been incorporated into the rim of the Bora One DB. For example, Campagnolo doesn’t need to drill holes into the tyre bed because of its MoMag design, short for ‘Mounting Magnet’. The nipples are inserted inside the rim through the valve hole and moved into position with a magnet. The idea is that this improves the integrity of the rim structure, safety is increased and the reliability of the rim is guaranteed.

The Bora One DB uses a new aluminium hub shell with an extended flange. According to Campagnolo, the hub has been smoothed as much as possible to keep aerodynamic drag to a minimum. 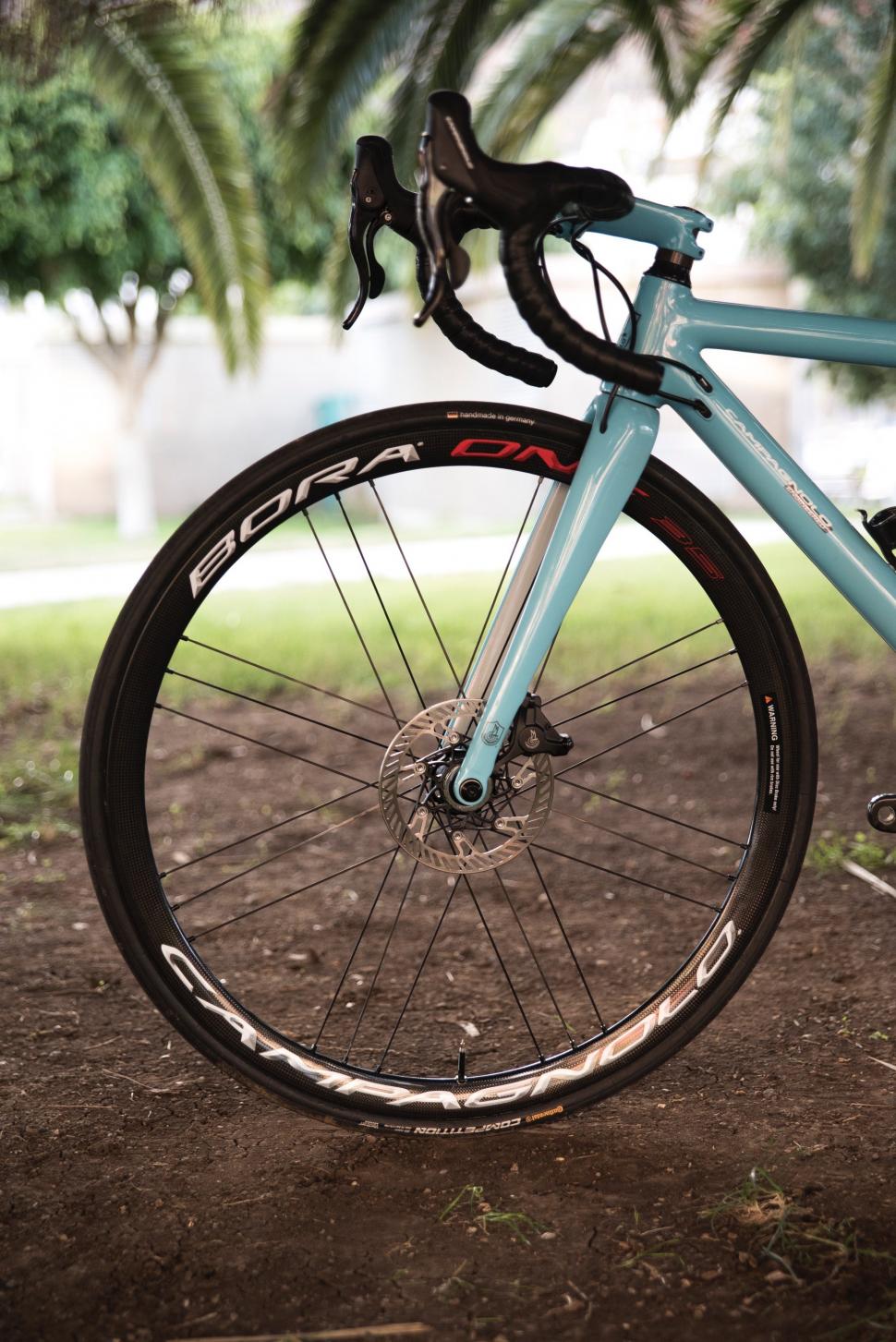 The hub features Campag’s USB ceramic bearings for rolling efficiency with a lockring for adjustment.

Bora One DB will come stock with HH12/100 spacing on the front and HH12/142 for the rear. You can get adaptor kits for different axles. 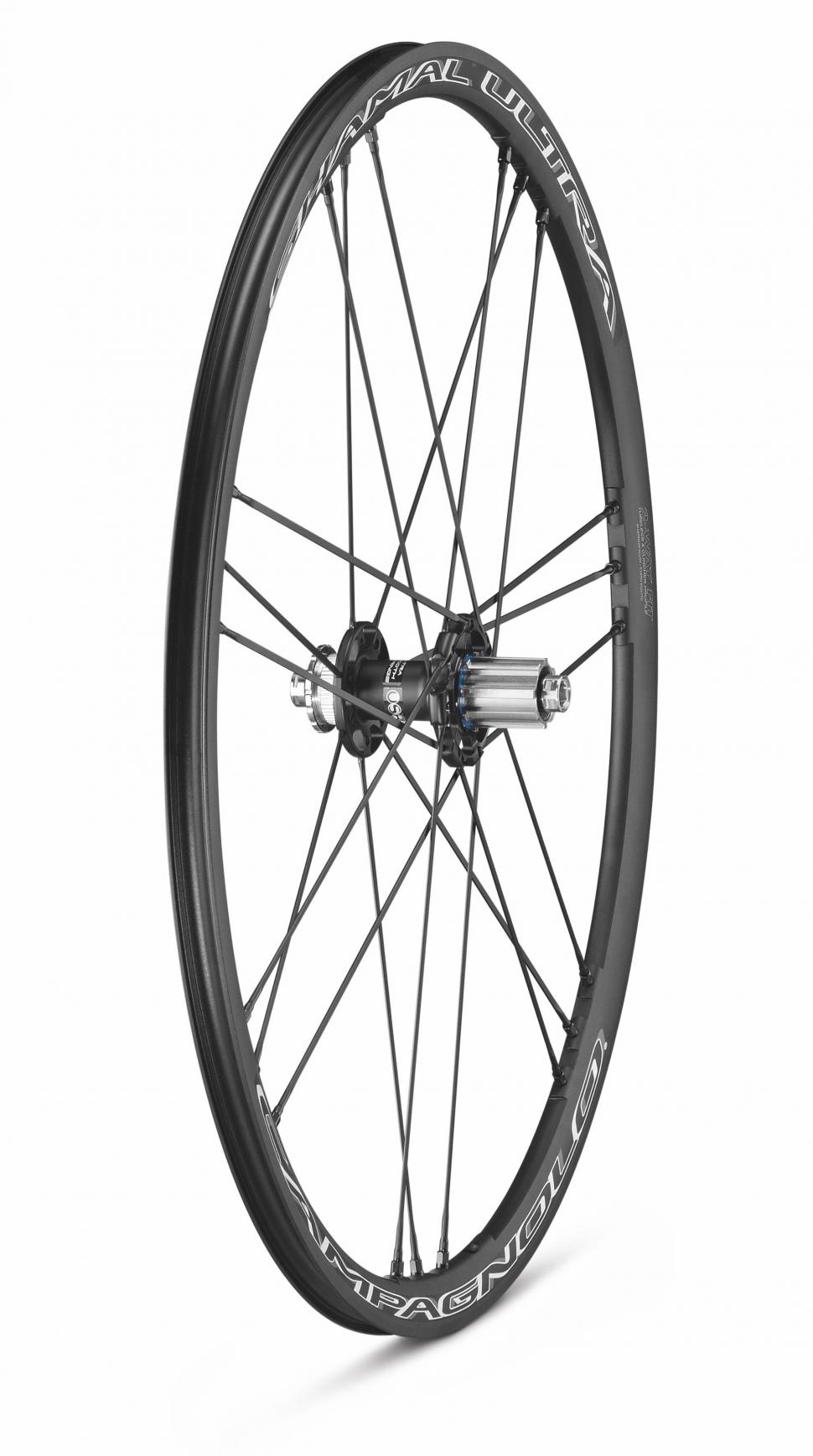 The Shamal Ultra DB 2WF is designed as a high quality aluminium race wheel for bikes with disc brakes.

Just like the rim brake version, the Shamal Ultra DB 2WF uses a 22mm wide rim with a 17mm internal diameter that’s designed to provide the support for 25mm and 28mm tyres. The 2WF in the name stands for ‘2-Way Fit’ which is Campagnolo’s way of saying that you can use either standard clinchers or tubeless tyres. You can switch between them without the need for any additional equipment apart from the tubeless valve that’s included with the wheelset. This is achievable because Campag uses its MoMag technology here (see above) which eliminates holes in the tyre bed.

The front rim is 27mm deep while the rear is 30mm, and Campag has reduced the weight by toroidal milling, removing material between the spokes where it’s not needed while keeping it around the nipples for reinforcement.

The Mega G3 spoke pattern of the rim brake Shamal Ultra rear wheel (where spokes are grouped in threes, two fixed to the driveside of the hub and the other to the non-driveside) has been carried over to the disc version.

Campag has added the G3 spoke pattern to the front wheel too, although this time two spokes are fixed to the non-driveside of the hub and one to the driveside, as they are on the Bora One DB front wheel (see above). This is designed to handle the forces of the disc brake rotor.

You get 21 aluminium spokes front and rear, held in place by new black anodised self-locking nipples. The new disc hubs have alloy flanges while the front one features a carbon fibre shell (Campag says that it can’t use a carbon shell at the rear because torque there is applied in two different directions – by the drivetrain and the disc brake – so an alloy structure is necessary).

The wheel rolls on Campag’s USB ceramic ball bearings which you can adjust via a lockring.

The Shamal Ultra DB 2WF wheels will come stock with HH12/100 spacing on the front and HH12/142 for the rear, with adapters available for quick release and HH12/135 rear axle.

Although they’re not directly linked to any particular groupset, Campagnolo sees these wheels as roughly Record level.

Scirocco isn’t a new name in the range but Campag has just reinvented these wheels and, naturally enough, says that they offer a high performance at an accessible price.

The aluminium rims have a 35mm deep profile, designed to reduce drag without creating instability in crosswinds, and a 17mm internal diameter.

“This wider rim, perfect for both 25mm and 28mm clinchers, allows the tyre to take a straighter, less bulbous shape and in turn leave a more uniform surface for airflow with less discontinuous area between tyre and rim to create turbulence,” says Campagnolo. The rim joint is welded rather than glued, Campag saying that this improves the structural integrity over some rivals and gives a precise braking surface. Spoke support tabs inside the rim are designed to distribute tension and further increase durability. The rims aren’t tubeless compatible although there are no holes in the inner section.

The hubs are aluminium, the rear one coming with an oversized flange on the driveside that’s intended to increase torsional stiffness, and they spin on steel bearings that you can adjust via an external lockring. The front wheel is radially laced with 16 variable profile spokes in stainless steel. The rear wheel uses Campagnolo’s Mega G3 spoke pattern (where the spokes are grouped in threes) with 14 spokes fixed to the driveside of the hub and 7 to the non-driveside, the idea being to handle the asymmetric forces of the drivetrain. 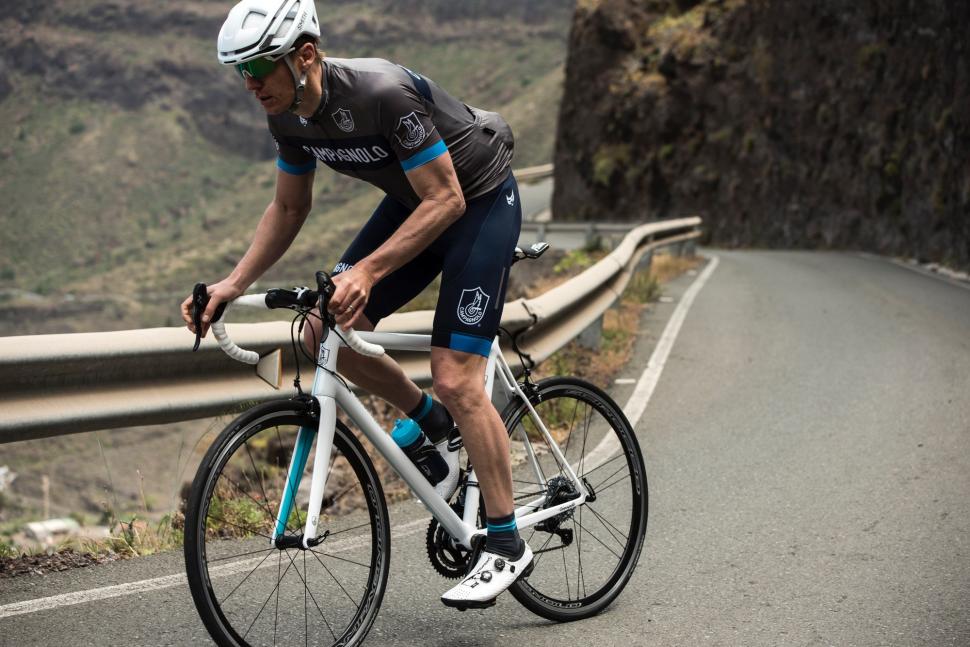