The 100th edition of the Giro d’Italia gets underway today and to mark this special occasion, Rapha has launched the Coppi Collection, commemorating one of the greatest cyclists of all time.

The new range pays tribute to the styles of the time with Rapha telling us it has created a “stylish and luxurious range” of clothing with designs that reflect some of Coppi’s victories, using some of his summit wins as inspiration. There’s everything from special edition jerseys and matching shorts, silk scarves, caps and socks, and even a tracksuit.

The Coppi Rosa Merino Jersey (£170) has been inspired by the Giro leader’s jersey, the Maglia Rosa, and its iconic pink hue. It’s made in Italy from thick merino wool with a graphic print woven into the front panels. There are three rear pockets and a short front zip. 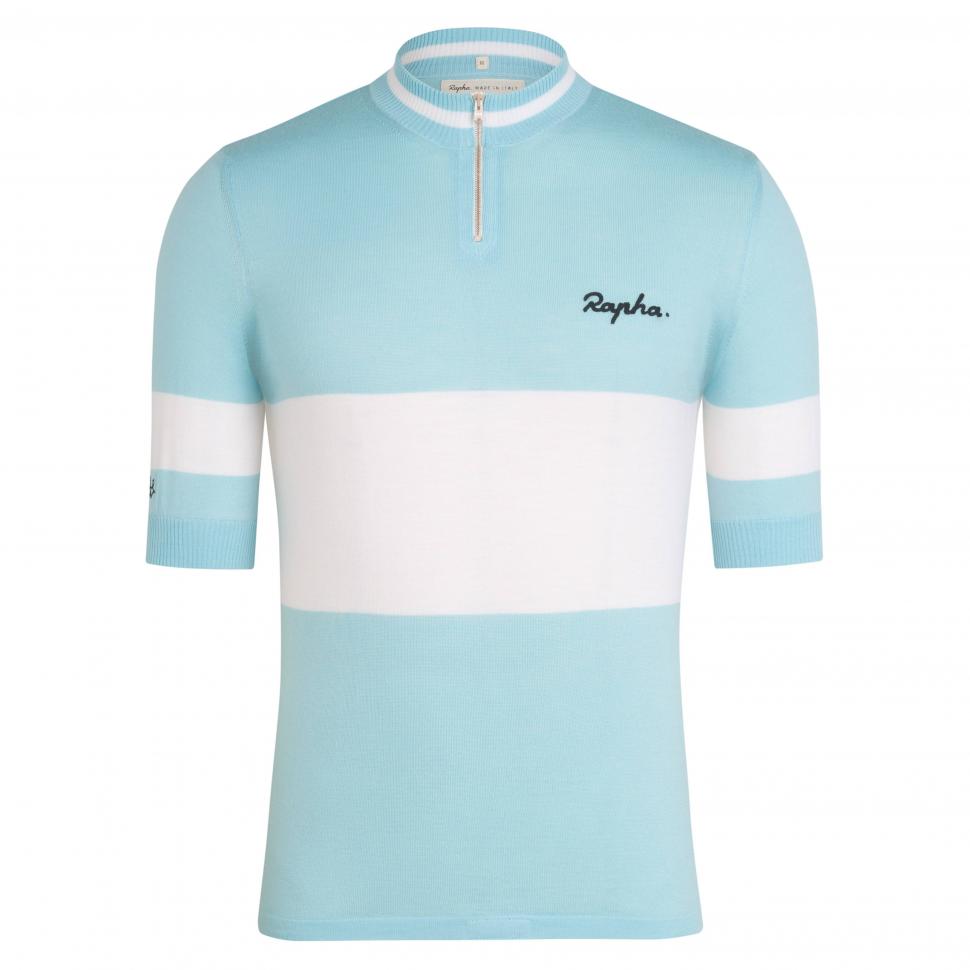 Because Coppi raced a Bianchi bicycle during most of this career, Rapha has created the Coppi Celeste Merino Jersey (£150). It’ll be interesting to see this jersey in the flesh and see how well it matches a modern Bianchi road bike in celeste. It’s made in Italy from fine merino wool and designed to be worn on and off the bike. 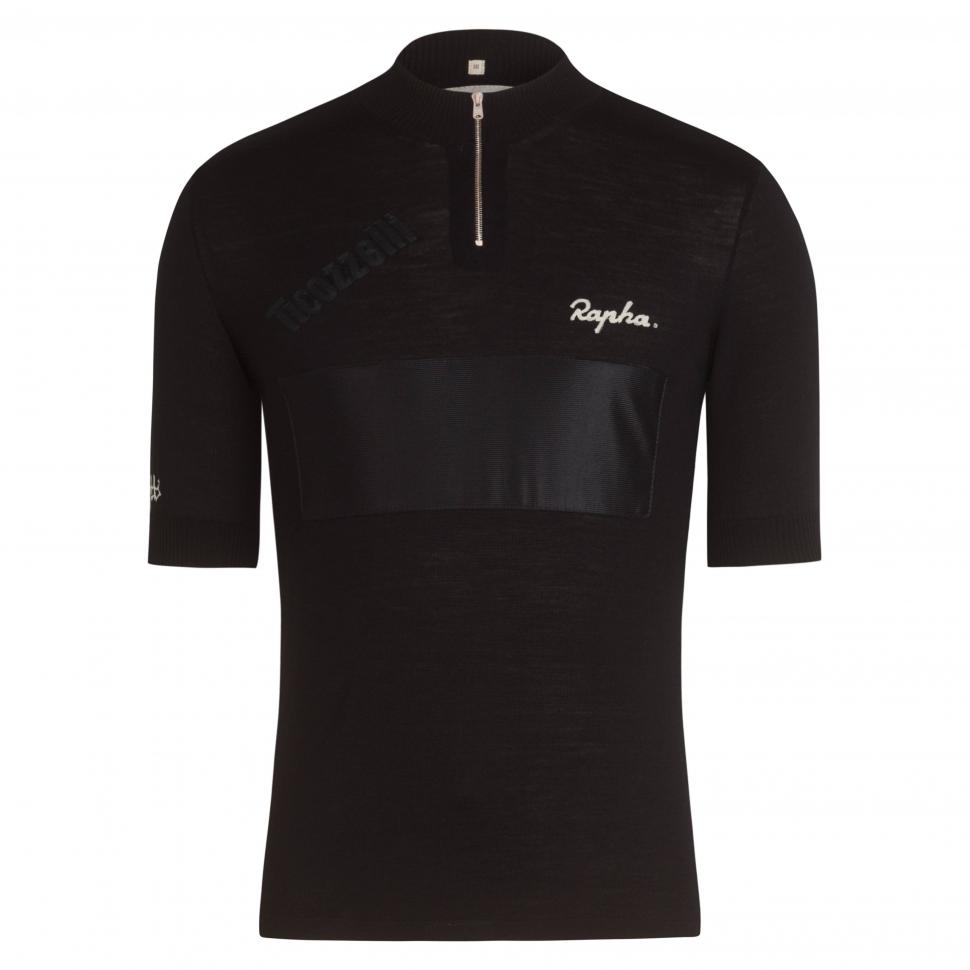 The Coppi Nera Merino Jersey (£150) draws inspiration from the Maglia Nera, the black jersey awarded to the last man to finish the race. This jersey was first introduced in 1946 and the black colour was chosen because it was the colour of the jersey that Giuseppe Ticozzelli wore, a footballer who rode the Giro as an independent in 1926. 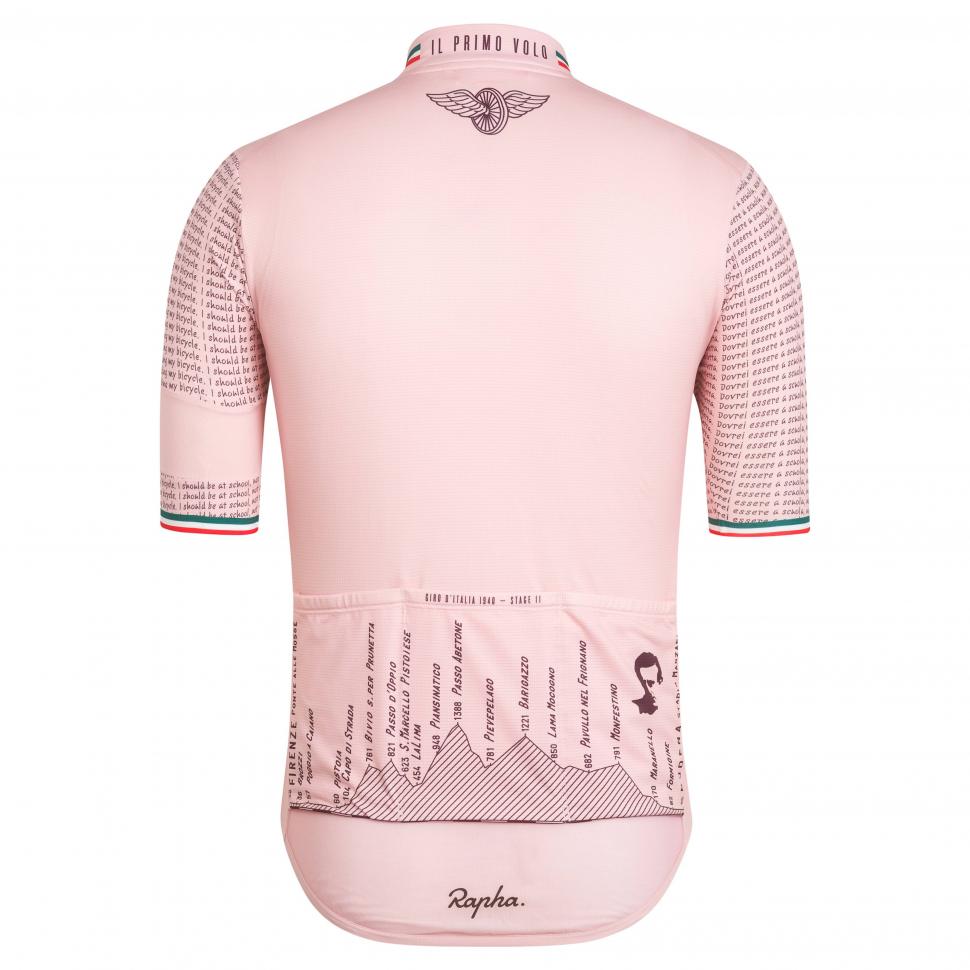 The Coppi Flyweight Jersey (£100) celebrates Coppi’s first victory in the Giro in 1940. The jersey is based on the company’s regular Flyweight jersey and uses a highly technical perforated fabric to excel in hot conditions, and is finished with a profile of the 11th stage of that race, including the Abetone climb on which Coppi attacked in rain and hail to take the pink jersey for the first time. 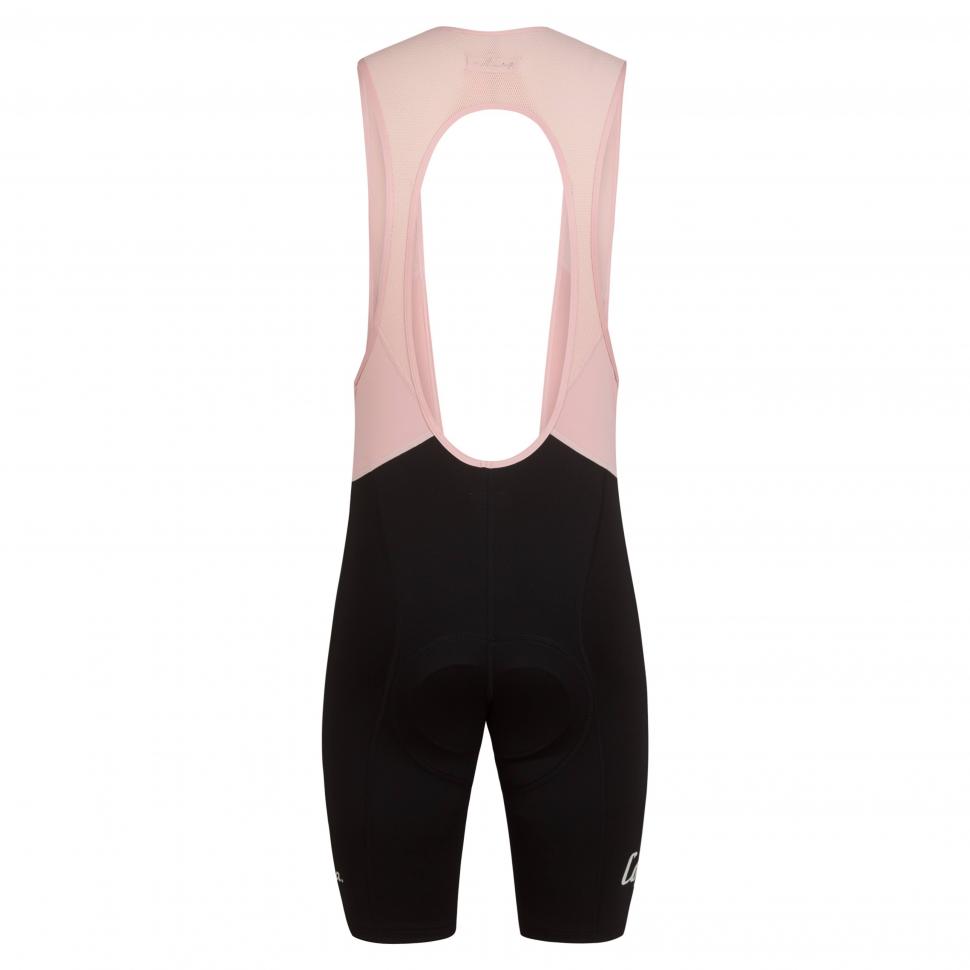 Pair that jersey with the Coppi Classic Bib Shorts (£180), based on the regular shorts of the same name but with colour and details to complement the jersey. 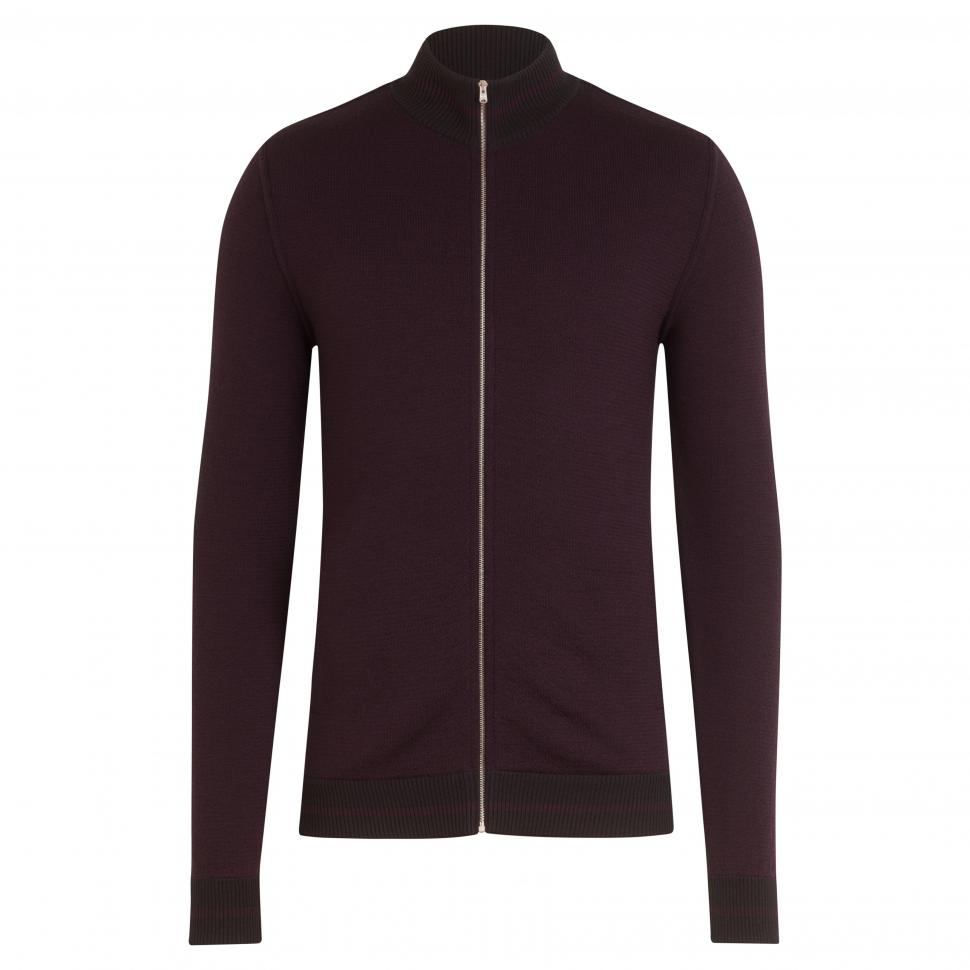 That’s all the cycling kit, Rapha has also launched a range of leisure wear including the Coppi Tracksuit, which emulates the tracksuits worn by racers in Coppi’s era, and still very much favoured by the professional peloton these days. 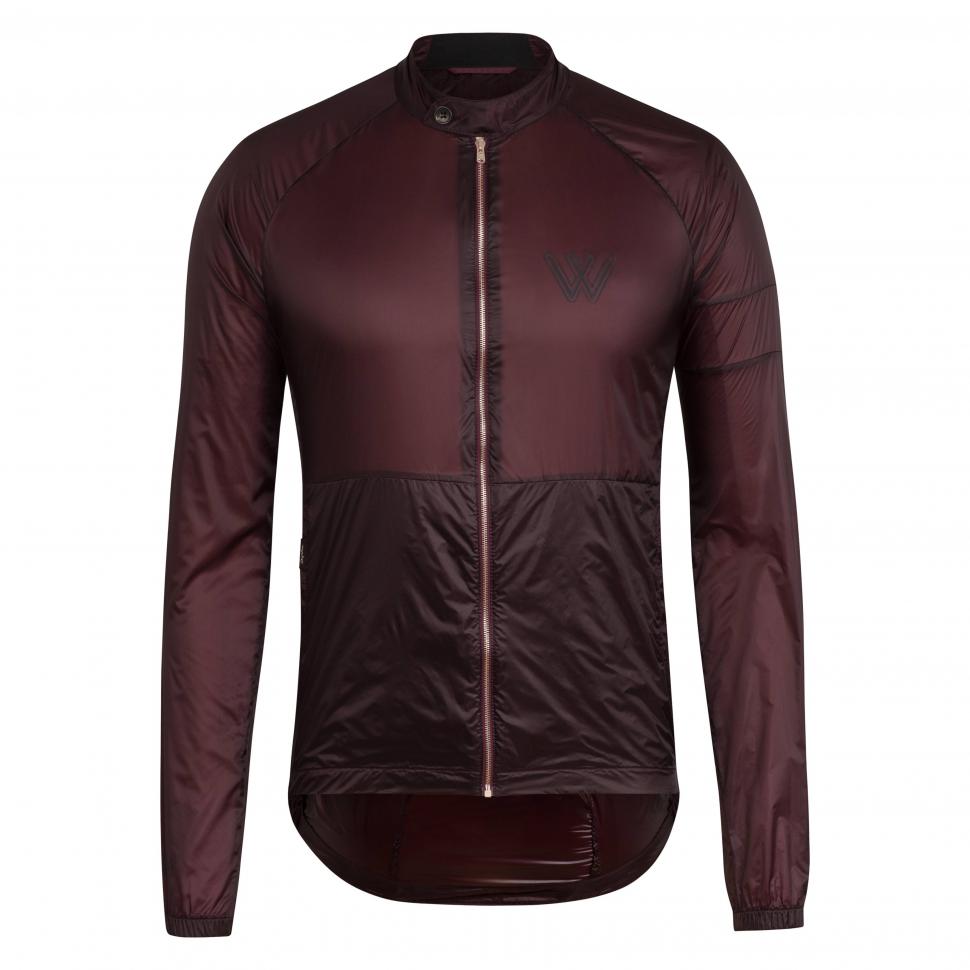 The Coppi Pack Jacket (£150) is based on the regular City Pack Jacket but gets a new design inspired by Coppi. 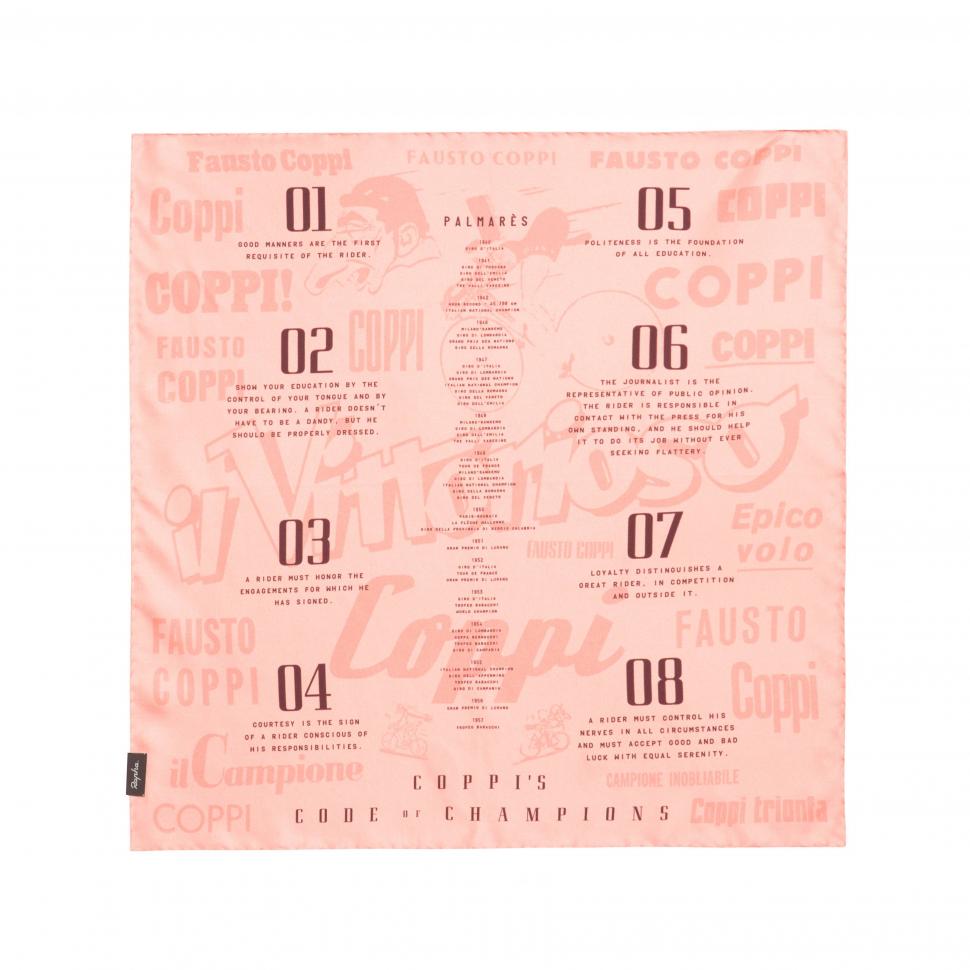 But wait there’s more… We’ve saved the best till last. It’s the Coppi Silk Scarf (£50) which according to Rapha is a “commemorative silk scarf detailing the unmatched palmarès of the great Fausto Coppi.” 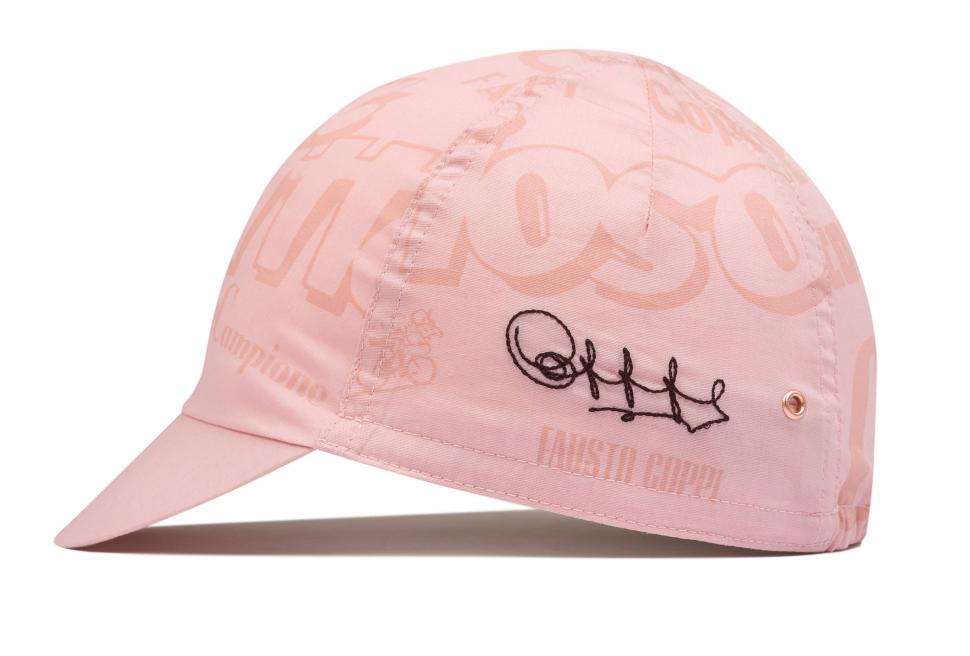 We’re running out of time, so we’ll just round up by saying there are also merino socks (£15), a cap (£35) and glasses (£200) in the range. You can really do your best Coppi impression during the next three weeks if you’ve got deep enough pockets.

You can see the full range at www.rapha.cc/coppicollection

Fauso Coppi, known affectionately as Il Campionissimo, was one of cycling’s true greats.

Coppi’s exploits are the stuff of legend, and although to remember seeing him in his prime, you’d need to be in your seventies now, he consistently tops polls to name Italy’s greatest athlete across all sports. 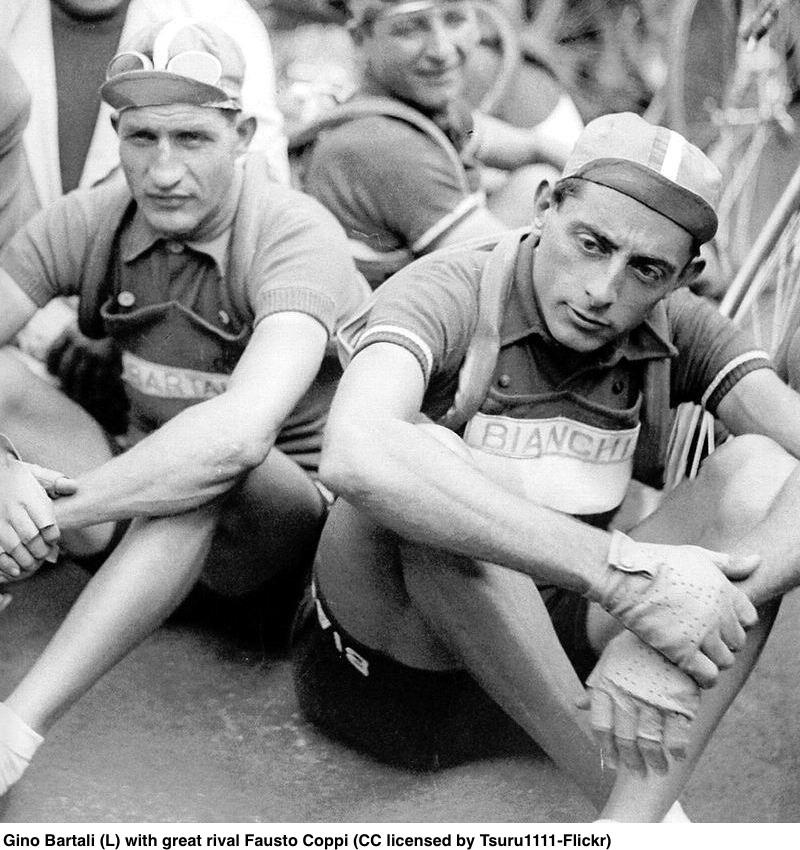 His palmarès speak for themselves. He won the Giro d’Italia five times – a record held jointly with Alfredo Binda and Eddy Merckx – and the Tour de France twice in three attempts, plus a string of one-day races including the Giro di Lombardia a record five times, Milan-San Remo – whose route takes in both Tortona and Novi Ligure – three times, Paris-Roubaix and the Flèche Wallonne and, in 1953 crowned his career with the World Championship.

In Milan in 1942, he also set a world record for the hour, 45.798km, a distance that would not be bettered for 14 years until beaten in 1956 by Jacques Anquetil. The bike that Coppi rode to set that record is now in the cycling shrine of the chapel of Madonna del Ghisallo, near Como, whose bells ring out each year when the Giro di Lombardia passes by.

Yet veteran Italian cycling journalist Rino Negri, who as a youth guided Coppi on training rides in the hills of the Oltrepò Pavese wine-growing area south of Pavia, said that Coppi himself steadfastly refused to single out any of his achievements as being greater than any other. “You should say the best things,” the cyclist told him, “not the best thing. There isn’t one exploit that’s greater than another.”

Had the Second World War not caused the suspension of the Tour de France for seven years and the Giro d’Italia for five, the likelihood is that Coppi, the consummate all-rounder, leaving rivals in his wake on ascents as well as in breakaways, sprints and in time trials, would have added still further to that already impressive list. Certainly, between 1946 ad 1954, he was almost untouchable, with the French cycling journalist, Pierre Chany, saying that during those years, once Coppi got free of the peloton, he was never caught.

Coppi was in many ways bridge between the romanticised, heroic days of pre-war cycling and the more technical-focused, tactical racing of the modern era. He watched his diet, followed a strict training regime including putting early-season kilometres into his legs ahead of the spring classics, and made sure he dressed appropriately for the conditions. His technique was flawless, with contemporary accounts stating that he was the most elegant rider ever seen.

The new tactics that Coppi introduced also saw the role of the gregario - the Italian term for domestique - evolve, from one of near-serfdom to the team leader to playing a much more important part in how races unfolded, something that endures to this day, although as his team-mate Ettore Milano said, “he was always our captain, but he never behaved as if he were our boss. Each time he asked for something, first, he’d say ‘please,’ then afterwards, ‘thank you’”.

Meanwhile, his great rivalry with Bartali, and the scandal that would later engulf his personal life, mirrored the fractures and growing pains within Italy itself as it recovered from wartime defeat and the accompanying struggle between fascists and partisans and transformed itself into a republic as it rushed headlong towards the years of the economic miracle and La Dolce Vita.

Born on 15 September 1919, and baptised Angelo Fausto Coppi, the youngster fell in love with cycling at an early age. The fourth of five children, he was beset by ill-health in his early years but by the age of eight, he was already in trouble at school for playing truant to ride a rusty old bike, missing its brake blocks, that he had found in the cellar of his family home. Leaving school at the age of 13, he worked as a butcher’s delivery boy in Novi Ligure, meeting other cyclists and developing an interest in racing, which led to him buying his first bike with the help of his father and uncle.

That purchase was not without its tribulations, however. Coppi later recalled how he had set his heart on a 600 lire, made to measure frame he had seen advertised in the paper by a shop in Genoa. Taking the train to the port city, Coppi placed his order and handed over the money. Promised that the frame would be ready within seven days, the youngster returned the following week, only to be told it wasn’t ready. Each week for two months, he travelled to Genoa, and each week returned home disappointed, and out-of-pocket for the train fare.

In the end, Coppi settled for a ready-made frame, not the made-to-measure one he’d set his heart on, feeling that the shopkeeper couldn’t be bothered to put in the work on a custom frame for a youngster from up in the hills. Nevertheless, his new bike enabled him to win his first race at the age of 15, for which he won a salami sandwich and 20 lire. By 1938, he had taken out a racing licence, winning his debut race, this time receiving an alarm clock.

In 1938, Coppi met Biagio Cavanna, an ex-boxer who had become a masseur after losing his sight, and who counted a number of cyclists among his clients, who suggested he turn “independent” – a class of rider able to compete against professionals and amateurs, and by the following year the cyclist was winning races by margins measured in minutes rather than seconds.

It was after the war that Coppi really came into his own. After his release, he travelled home by a mixture of cycling and hitch-hiking and returned to racing in July 1945 in the Circuito degli Assi in Milan. Naturally, he won. The following spring, he won his first Milan-San Remo, where he was one of nine riders that broke off the front in the opening five kilometres of the 292km race. Coppi left his fellow escapees behind on the ascent to the Passo del Turchino and eventually won by 14 minutes from the Frenchman, Lucien Teisseire.

In 1949, Coppi became the first rider to win the Giro d’Italia and the Tour de France in the same year, a feat he repeated three years later. That 1949 Giro victory included what many believe to be his greatest ever victory, on the stage from Cuneo to Pinerolo, 20km or so south-west of Turin, when he attacked early on and won after a 192km solo break, leaving Bartali 11 minutes down the road. His performance in that year’s Tour de France was equally imperious. By the time the race arrived in Paris, the Italian was half an hour ahead of the entire field with the exception of his compatriot and rival, Bartali.

The 1952 Tour de France was one of the highlights of Coppi’s career. That year’s race included the first-ever ascent of the Alpe Alpe d'Huez, which Coppi won after attacking six kilometres from the summit. By the time the Tour arrived in Paris, Coppi was almost half an hour ahead of the field, and prize money for other places had been doubled by the organisers to keep the rest of the field interested in the race.

The book “Fallen angel” is a really good read about his story.