Here is it, arguably one of the most highly anticipated new bikes of 2017, the Canyon Aeroad CF SLX Disc.

It’s no big surprise that the German direct-sales brand has added an entire range of disc-equipped road bikes to its 2017 range. Disc brakes are rapidly sweeping through the industry, and no longer just found on endurance and cyclocross bikes, race bikes are getting the disc treatment now as well. While it might appear that Canyon was slow to the whole disc brake game, it first showed the Ultimate CF SLX Disc in prototype form at the annual Eurobike show in 2015 and followed that up last year by teasing pre-production race-ready disc braked bikes. 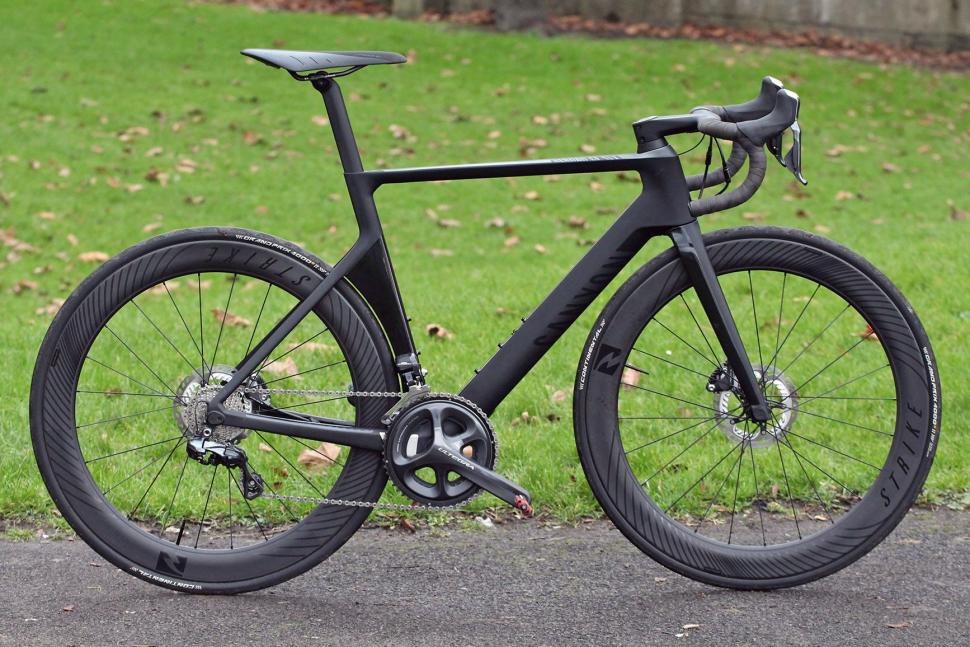 But go back to 2006 and Canyon was already working on disc brakes with the Projekt 6.8, a disc-equipped race bike with hydraulic disc brakes and weighing 6.8kg. It was way ahead of its time. You could say Canyon has just been waiting for the equipment suppliers of the disc brakes and wheels, to catch up, and for the market's appetite to be primed before really launching a full range of disc-equipped road bikes. 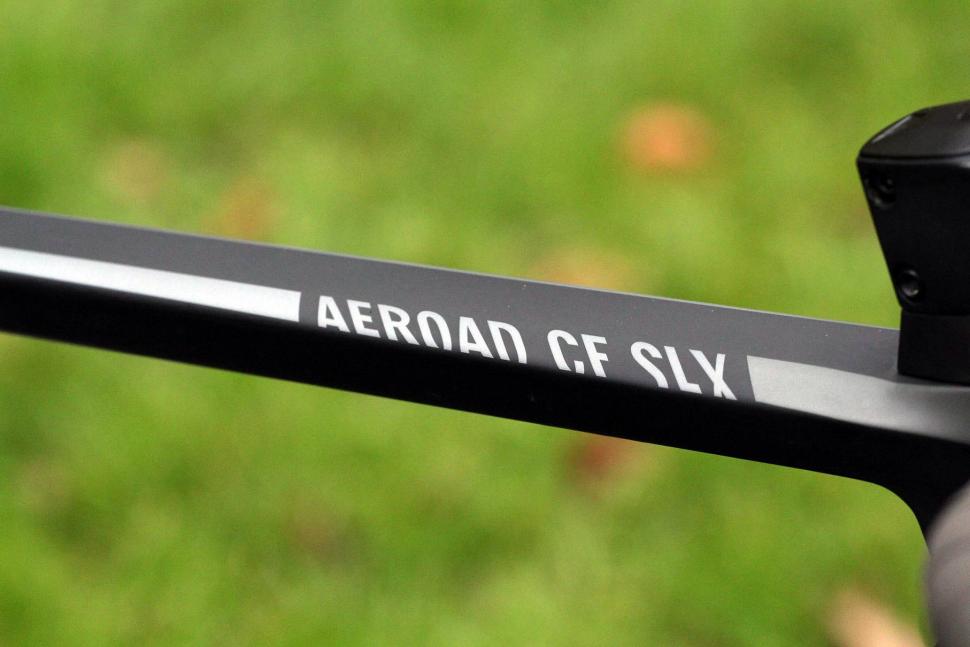 So the new Aeroad CF SLX Disc is the first of the new breed of race-ready disc road bikes. I’ve previously tested the Endurace CF SLX Disc, and there is some shared technology, namely the 12mm thru-axles and flat mount disc brakes. But there the similarities end, and the differences emerge. Canyon has managed to retain the key design profile of the regular Aeroad in adapting it for disc brakes, and if you ignore the disc rotors, it looks almost the same. 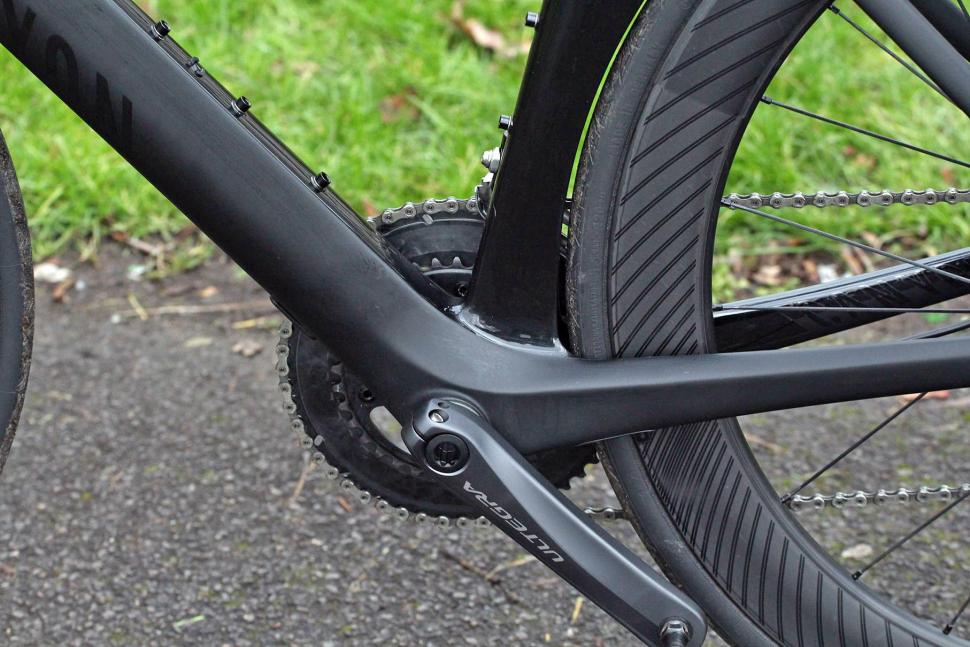 Disc brakes are slow and generate loads of drag, right? It’s something you’ll read a lot if you spend too much time on cycling forums. It’s perhaps not as big a deal as you might imagine if you believe Canyon’s own wind tunnel testing. It says the new Aeroad Disc gives away just 0.8 watts to the rim brake version in its wind tunnel tests. We always take manufacturers claims with a pinch of salt, but still, it’s a very small difference. 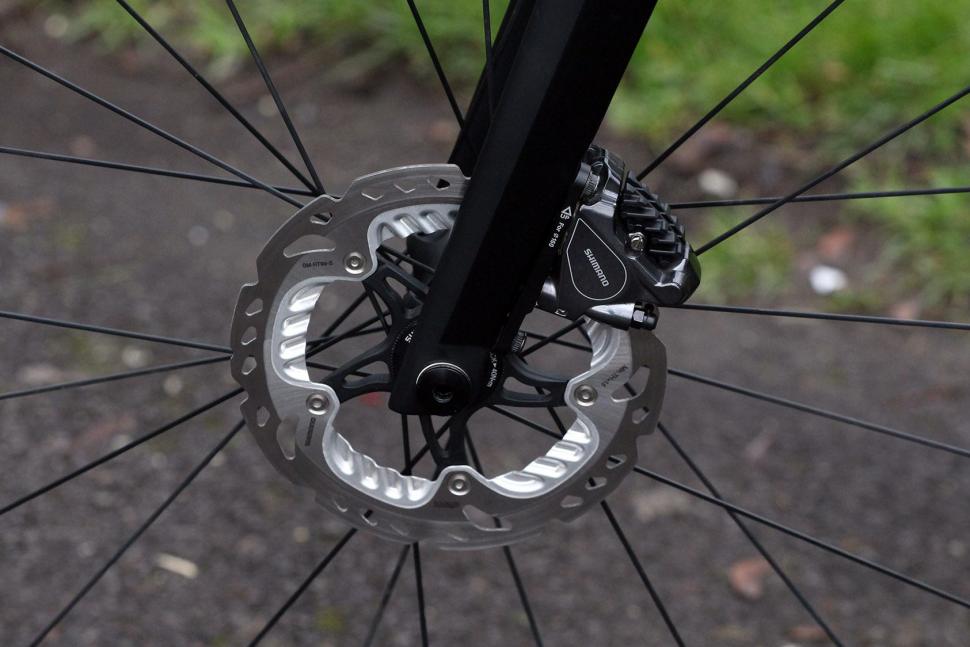 This is the second rung model in the new range and it gets a Shimano Ultegra Di2 groupset, using a semi-compact 52/36 chainset and 11-28t cassette. The brakes are hydraulic and Canyon has used the bigger 160mm rotors, a decision made based on its own testing and not following Shimano’s recommendation for 140mm rotors. It’s using the now familiar Shimano RS805 flat mount disc brake calipers, and Canyon has routed all the hoses inside the fork and frame, to maintain the clean lines and keep drag to a minimum. 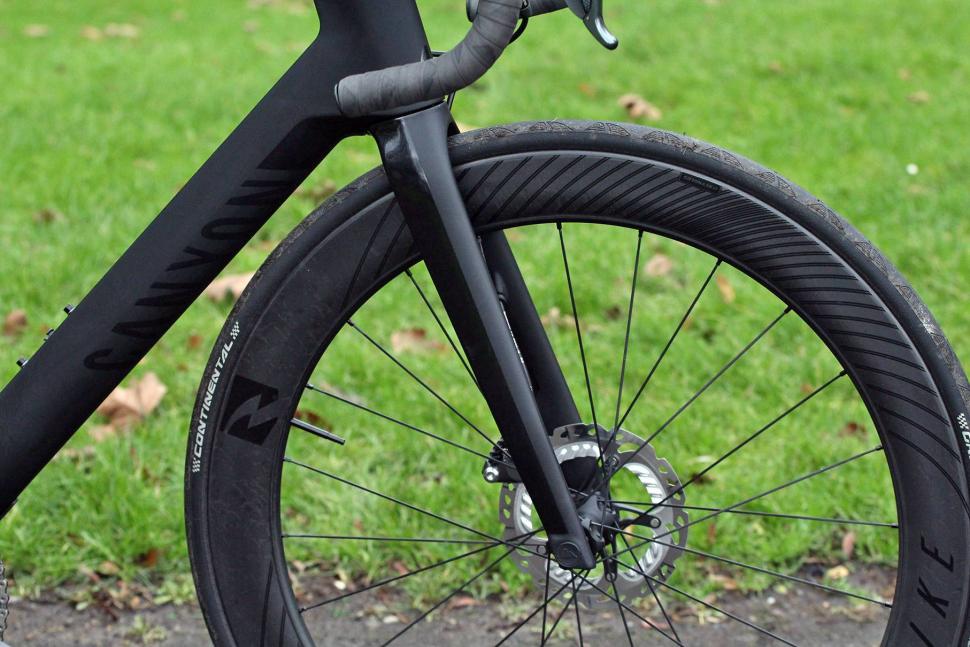 Adding to its awesome appearance are the Reynolds Strike Carbon Clincher wheels, shod with Continental Grand Prix 4000S II tyres in 23/25mm width. The Strike DB is a new wheel from Reynolds, a company that has claimed many fans with its reliable and high-performance carbon clincher wheels. The 62mm deep section Strike rims are fashionably wide at 25mm rim, and they’re also tubeless-ready profile. At their centre are new hubs made by Industry Nine with quick release and thru-axle compatibility. They weigh a claimed 1,710g. 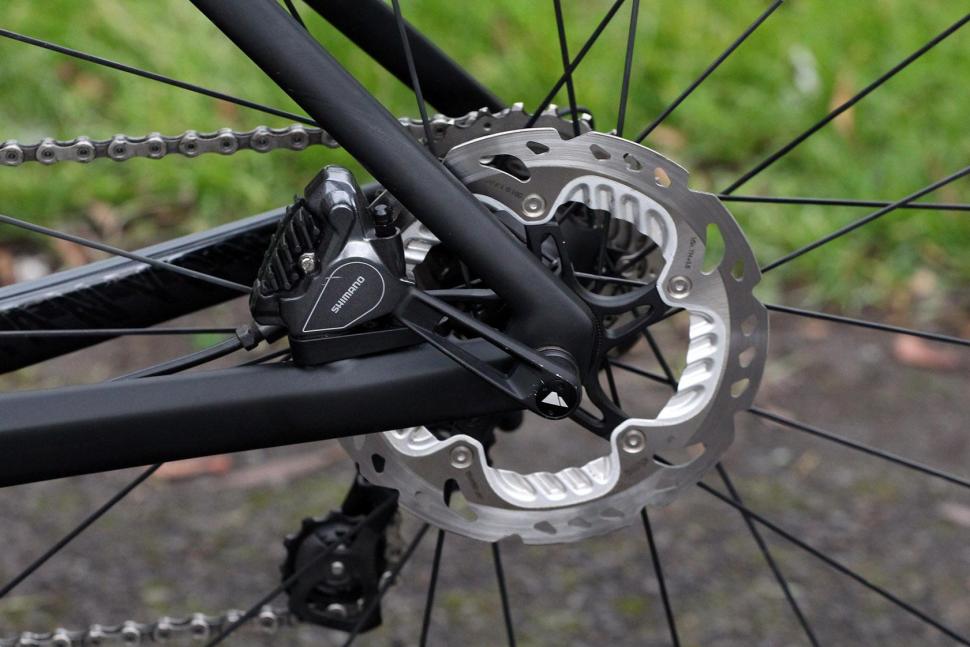 The bike is then finished with Canyon's own Aerocockpit CF integrated handlebar, matching carbon fibre seatpost and a Fizik Arione saddle. On the scales, the size medium review bike weighs 7.8kg (17.1lb) which is 400g heavier than the similarly specced Aeroad I tested a few years ago. Weight matter less on an aero bike than one built for climbing and all-round ability, but it’ll still be interesting to see if it has a negative impact on the way it rides. 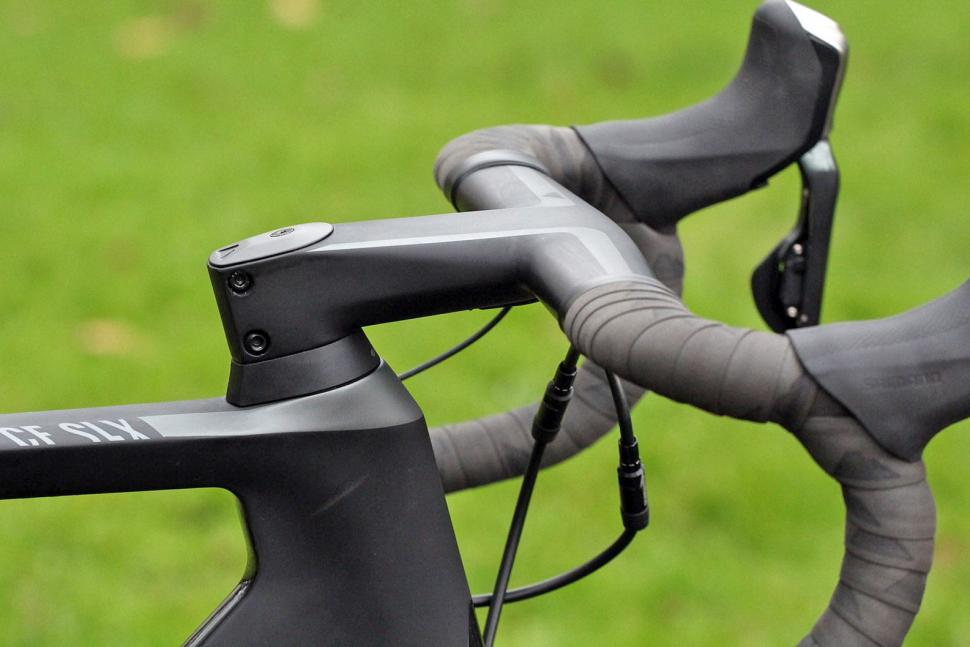 The new Aeroad CF SLX Disc range tops out at £5,199 if you want the same frame and brakes with a Dura-Ace mechanical groupset. Alternatively, the range gets underway with the Aeroad CF SLX Disc 8.0 costing £3,799 which is built around a mechanical Ultegra groupset, but all the other key parts are the same as the bike we’ve got here. There’s also a frameset option for £2,899. 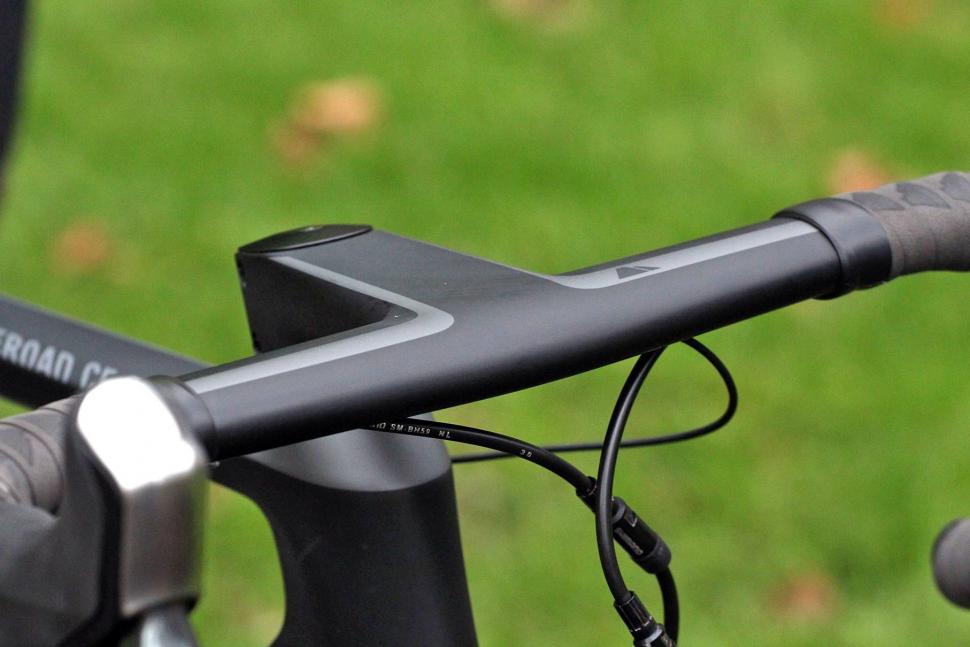 There aren’t many disc-equipped aero road bikes on the market at the moment, but one very important bike the new Canyon Aeroad CF SLX Disc will be compared with is the Specialized Venge ViAS Disc that I tested last year. The Venge was similarly priced and specced and weighed the same, which just leaves the performance, ride and handling to be compared.