What bikes for gravel riding?

What bike for gravel and adventure riding? 13 bikes from the Gravel Rocks weekend in Kielder Forest

This past weekend saw the first running of the Gravel Rocks weekend in Kielder Forest. Conceived by the organisers of the Dirty Reiver 200km gravel ride first run back in April this year, the weekend was planned to offer anyone entering the 2017 event, or any other gravel or adventure challenge for that matter, the chance to get familiar with the unique demands of riding gravel roads and all in the company of some of the most experienced adventure cyclists, the likes of Mike Hall, Lee Craigie and Emily Chappell.

The first thing I did upon arriving was to take a closer look at the bikes that were being used for the weekend, and what a selection of bikes met my eyes. There were certainly more actual adventure bikes compared to the higher average of converted cyclocross bikes I saw at the Dirty Reiver event earlier this year. That's understandable; gravel and adventure riding is in its infancy in the UK but it’s rapidly taking off. It's clear more people are really getting into this style of riding, and it's freedom, challenge and escape from busy roads that were a common theme from the people I chatted to over the weekend. 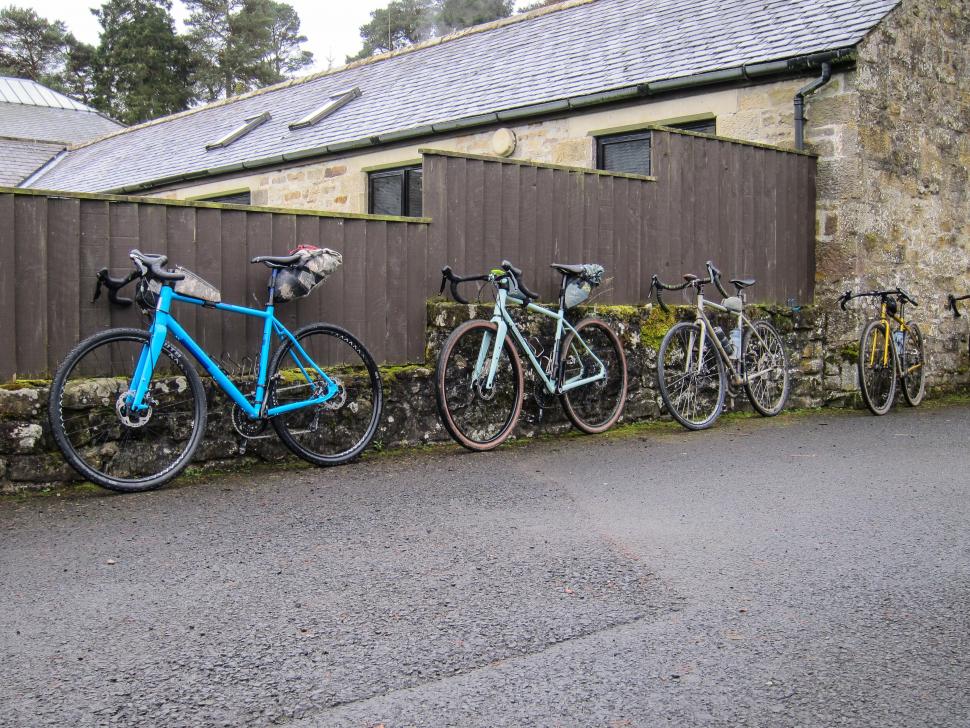 It's clear there are many different ways to build a bike for tackling gravel and that no one single blueprint exists, but there are some trends that emerge when you look at all the bikes together, the biggest one is that wider tyres are common. But you knew that, of course, but I was surprised by the huge spread of tread patterns and sizes that people were using, some going as wide as the bike would accommodate whilst others went with fairly conventional cyclocross tyres. Mike Hall was the star attraction of the weekend, being one of the UK's fastest and most seasoned endurance adventure racers. He rocked up with his Pivot Vault, a cyclocross race bike made from carbon fibre and featuring disc brakes and thru-axles at both ends. Tyres were Michelin’s Jet CX model, a semi-slick designed for riding over hard ground, such as the tough gravel roads around Kielder. 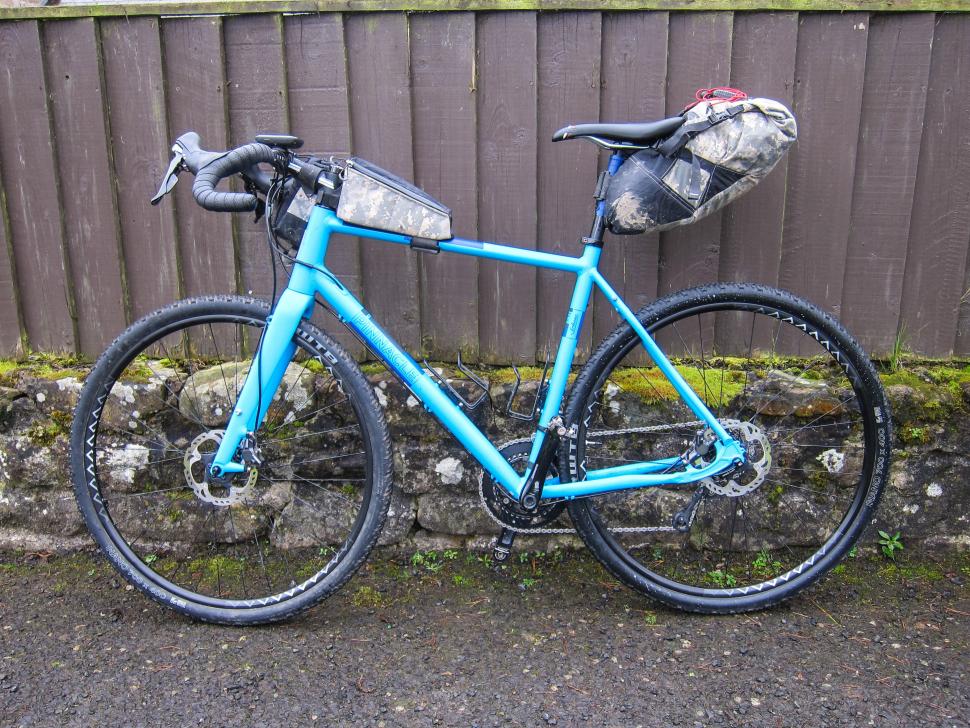 A Pinnacle Arkose fitted with WTB Nano 40mm tyres and an extremely flared dropped handlebar and rigged up with bikepacking bags, providing storage space for additional clothing and food for the ride. 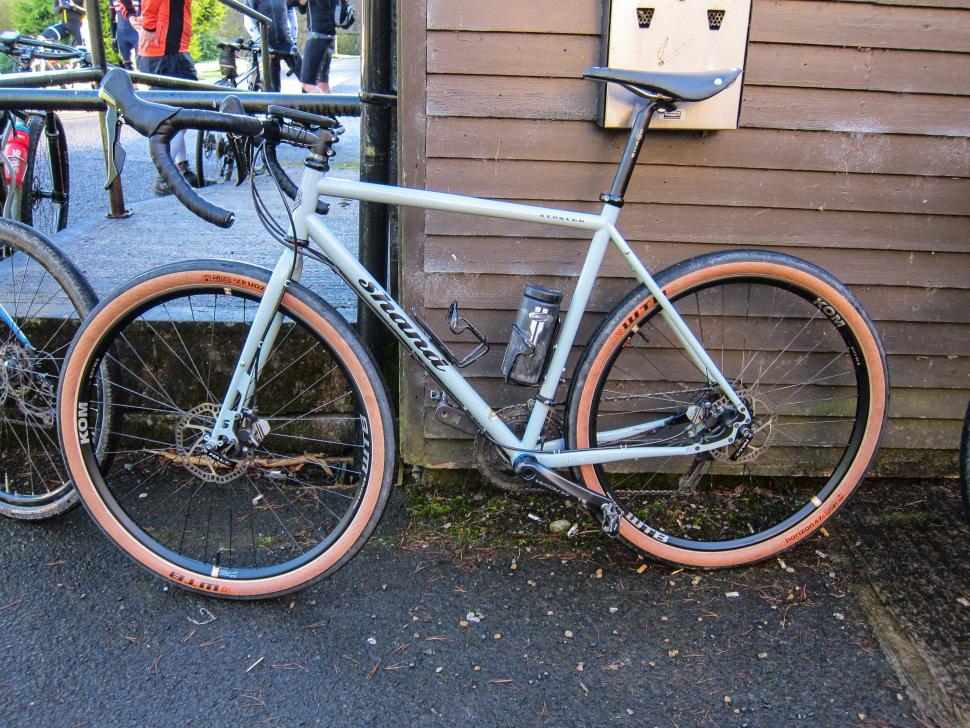 Scottish bike company Shand was well represented at the Gravel Rocks event. This is the Stoater, a steel road bike that is designed to be capable of doing everything from road miles to cyclocross, touring and, of course, taking on gravel roads. 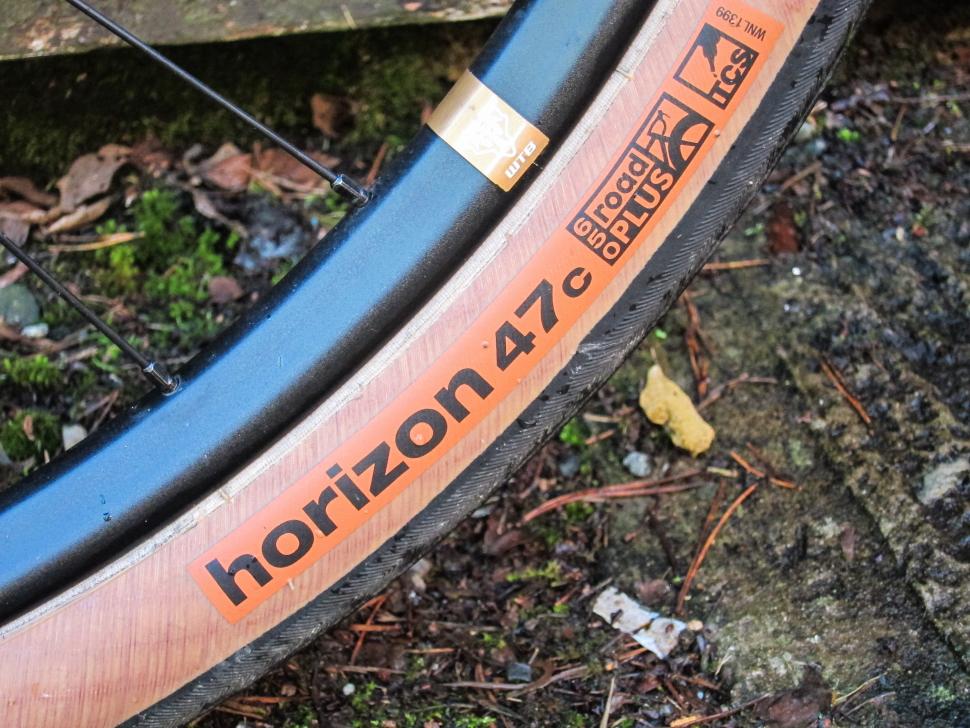 It’s been fitted with WTB Horizon 47mm x 650b tyres on WTB KOM rims, one of the very few bikes to be running this tyre size. It's more "roadplus" than dedicated gravel, but the tyre appeared to be working on the gravel roads through the Kielder Forest well. This Shand Stooshie belongs to Emily Chappell, winner of the 2016 Transcontinental Race. The Stooshie is based on the Stoater but swaps the steel fork for one made from carbon and there’s a 44mm head tube to provide a bit more stiffness. Her bike has a Shimano 105 mechanical groupset with TRP Spyre disc brakes, and it’s fully kitted out with Apidura bags. There’s also a dynamo front hub powering front and rear lights, so fewer batteries to charge. Tyres are the Continental Cyclocross Speed in 35mm width. It’s worth reading the interview with Emily on the Rapha website. Proving you don’t need gears or even a freehub one rider was running this Genesis Day One fixed wheel bike, and doing a fine job of keeping up with everyone on the ups and downs. It spins out at about 25mph, apparently, which is plenty fast enough for gravel riding, and it certainly reduces the possibility of a mechanical failure. And how cool is that front rack solution? Santa Cruz’s Stigmata is a carbon fibre cyclocross bike designed for racing, it shuns such concessions to versatility as mudguard and rack mounts. That didn’t prevent it from looking right at home on the gravel tracks, with a pair of WTB Nano 40mm tyres squeezed into the available clearance - the company claims clearance up to 41mm. 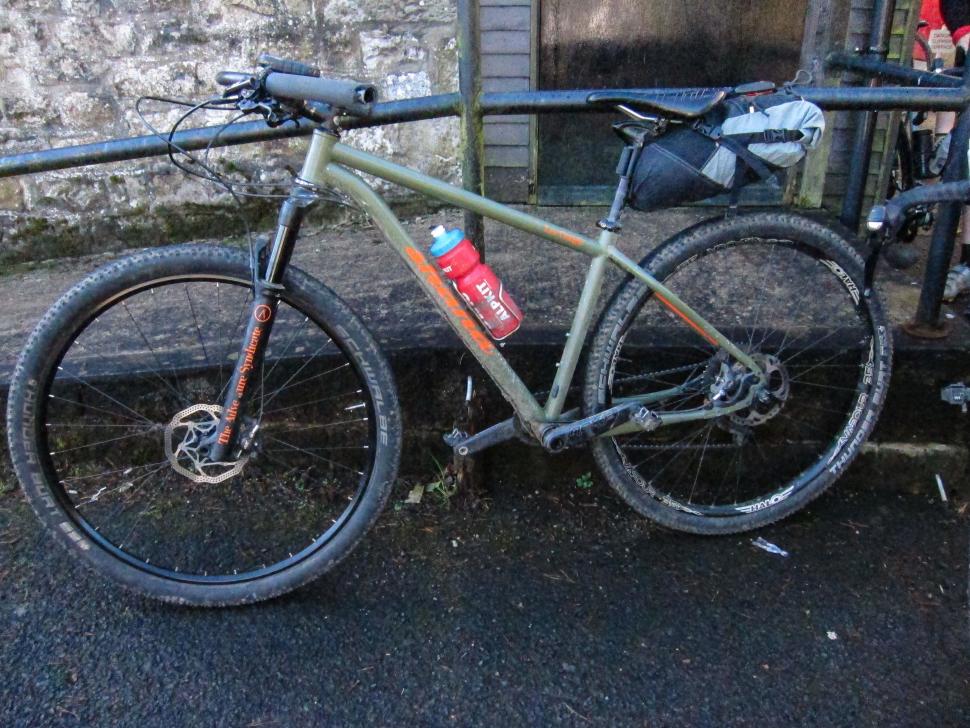 Lee Craigie is a Scottish cyclist that rose through the ranks of mountain bike cross-country racing and represented Team Gb at the world championships and finished 7th at the 2014 Commonwealth Games. More recently she has turned her attention to adventure cycling and bikepacking events, she competed in the Highland Trail 550 and very nearly won it, finishing in a staggering 4 days 5 hours. She was riding a custom Shand Bahookie built for her, fitted with Halo/Hope 29er wheels and Schwalbe Thunder Burt tyres and a RockShox Sid suspension fork. 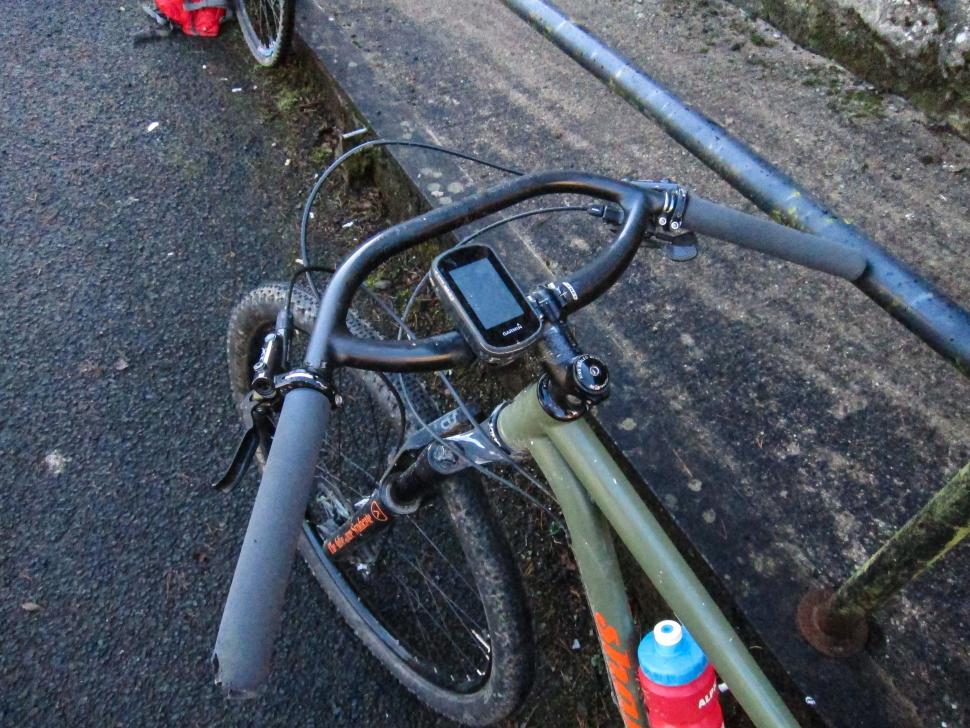 Flared drop handlebars are quite common on gravel bikes, the position providing a bit more comfort and control for some people, but this Jones H-bar is at the extreme end of the handlebar scale. The idea is that it provides “better handling and more comfort than a traditional bar” according to Jones. Another Santa Cruz Stigmata but this one was built up with some very nice parts, a SRAM 1x11 groupset with hydraulic disc brakes and check out those Zipp 303 wheels - the only bike I spotted rolling on carbon. 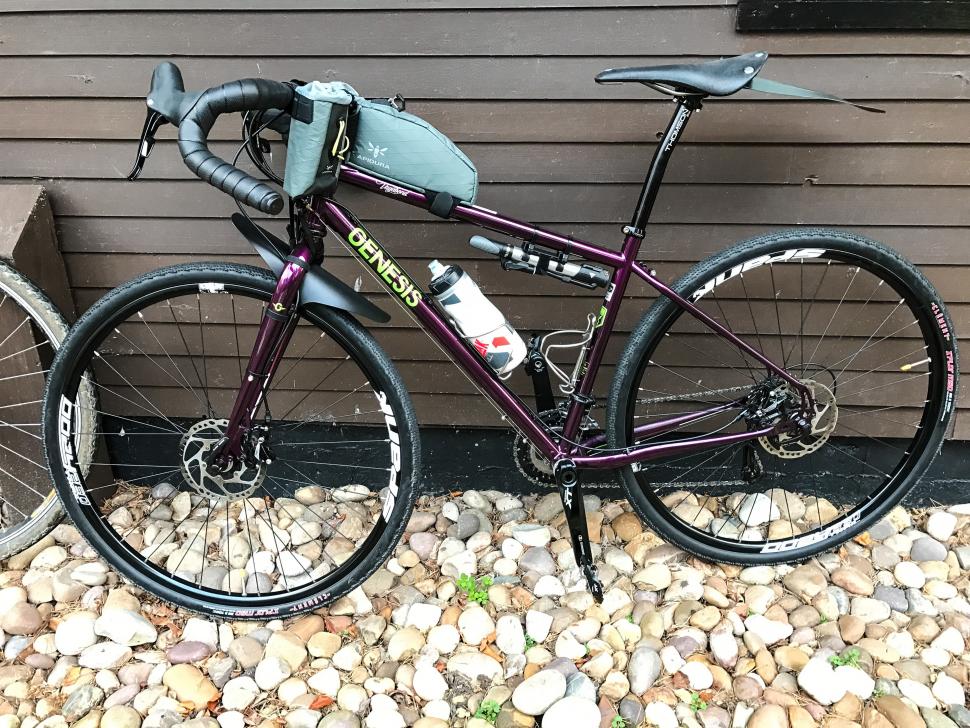 Genesis Bikes was another bike company well represented at the Gravel Rocks event. The Vagabond is a steel-framed ‘monstercross’ bike that can turn its hand to just about any sort of riding and provides almost unlimited build options. This one was running Spank 29er mountain bike wheels with Clement X’Plor MSO gravel tyres and a mix of SRAM hydraulic disc brakes and Shimano Deore XT drivetrain. 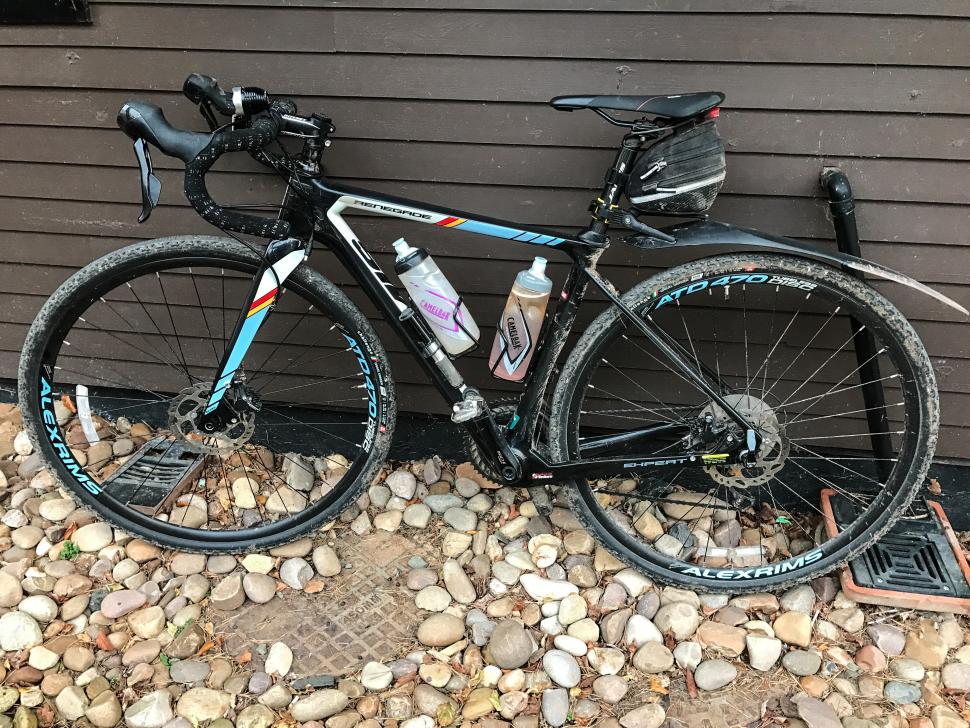 Jez absolutely loved the Jamis Renegade when he tested it last year, a carbon fibre adventure bike built around disc brakes, thru-axles and big tyre clearance. This one was sporting Challenge Gravel Grinder 38mm tyres, with feature a file tread centre section and larger shoulder knobs. They looked perfect for the hard-packed gravel around Kielder Forest. The rear mudguard is a sensible upgrade to keep the bum dry and a large saddle bag is another option if a bikepacking saddle pack is too large for a long gravel ride. 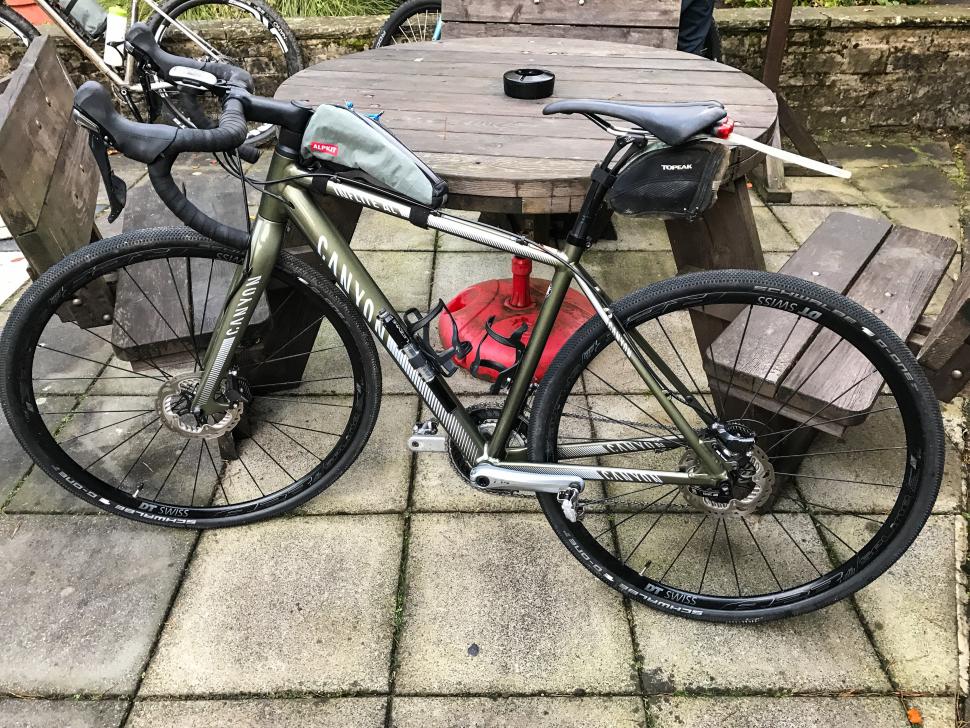 A Canyon Inflite AL bike is the German direct-sales company’s go-to cyclocross bike but it looked right at home on the gravel roads with a pair of excellent Schwalbe G-One tyres. The flexy split seatpost would have provided a nice bit of cushioning on some of the rougher gravel we rode over. 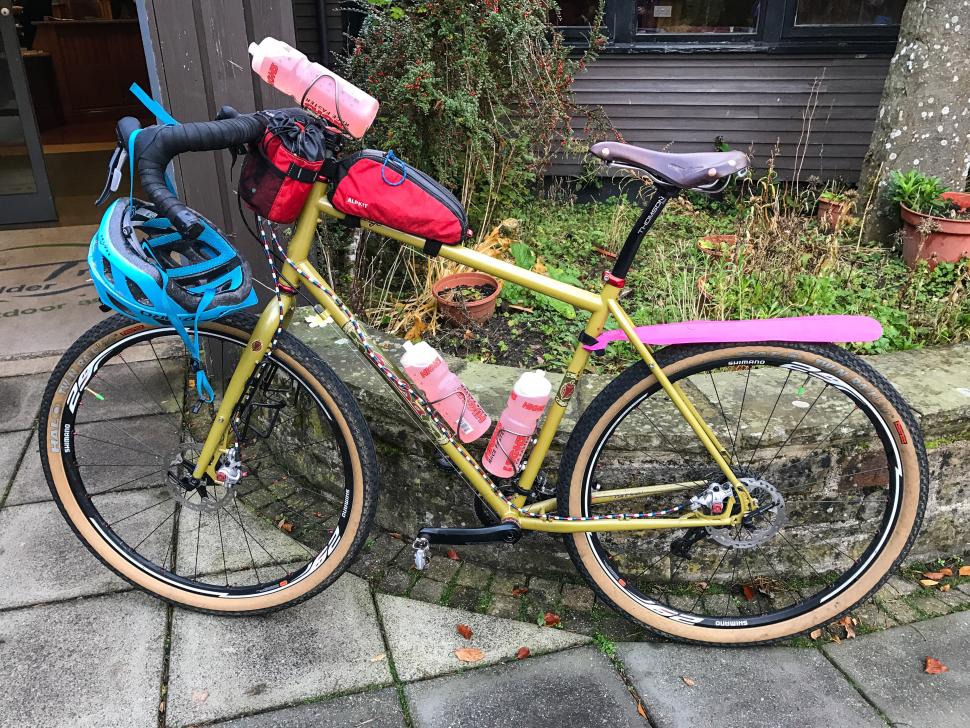 Without a doubt, one of the most interesting bikes was this Salsa Fargo, which probably had the biggest tyre clearance of any bike and it was rolling on Halo’s massive 56mm wide 700c tyres. It’s clear the owner has sweated the detail, with a rear mudguard, Brooks saddle, flared drops and extra bottle cages on the steel fork. Not one, but two Parlee Chebacco adventure bikes looking resplendent together. Nearly identical builds, the only real difference being the tyres, WTB Nano on one and Clement X’Plor MSO on the other.

A full account, video and photos from the Gravel Rocks event is coming soon.