You wait ages for a new triathlon bike and then two come along at the same time. You’ve read about the radical new Cervélo P5X, right? Now let’s tell you about the new BMC Timemachine, which the Swiss company boldly bills as “the fastest bike on Earth."

While Cervélo has designed a bike that can only be used for triathlon events (it’s UCI illegal) BMC has developed a bike that both manages to be focused on the specific needs of triathletes, but thanks to clever seatpost design it can be UCI legal. The majority of time trial bikes can be used for triathlon with a few small changes, but the new Timemachine better addresses the needs of triathletes whilst still being UCI legal, so the BMC Racing Team can use it, according to the company. 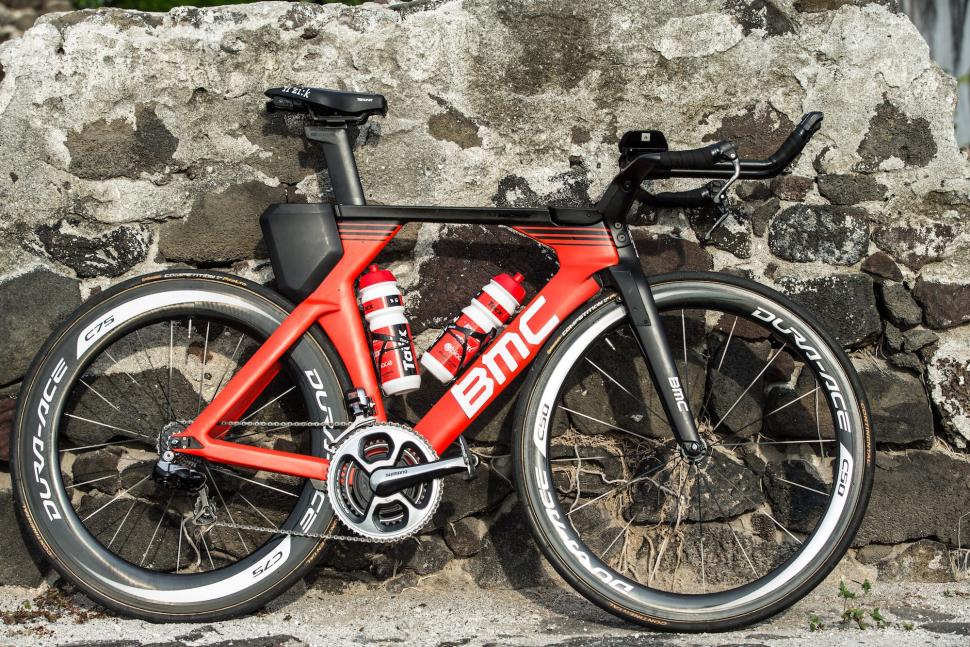 According to Mart Otten, BMC Switzerland Road Product Manager, “The new Timemachine is the benchmark for time-trial bikes. In its development, instead of putting the time-trialist in focus like its predecessors, we gave priority to triathletes. We leveraged the Impec Lab to explore unique solutions that would not just meet triathletes’ needs, but go a step further and create a product that truly enhances their performance. We are looking forward to seeing this new aero machine break some Ironman and middle distance triathlon records!”

BMC has spent the last two years developing the bike and much of that time in the Sauber Engineering wind tunnel. It has revised the tube shaping in every part of the frame with re-engineered profiles, using the popular truncated airfoil shape. There’s a new 3rd generation hinge-fork design (which it first developed a decade ago), a smaller frontal surface area and more integration, with cables, seat clamp and brake calipers hidden from the wind. No disc brakes, though... BMC also re-invented its Position-to-Perform (P2P) rider positioning system to provide improved adjustability and cater for a wider range of fits. One of the standout new features is the novel “V-Cockpit” split handlebar design that it says provides the most aerodynamic front-end position, especially for cyclists that require a higher stack. It also claims the forward offset position provides more vertical compliance. While the new V-Cockpit is supplied with all bikes, it’s completely optional - if you prefer a lower position, a regular handlebar can also be fitted, with a flippable base bar. It’s likely the V-Cockpit won’t fall within UCI guidelines.

Whilst BMC claims the bike is a fast, it doesn’t offer any aerodynamic data or improvements over the previous model, or compared to its key rivals. 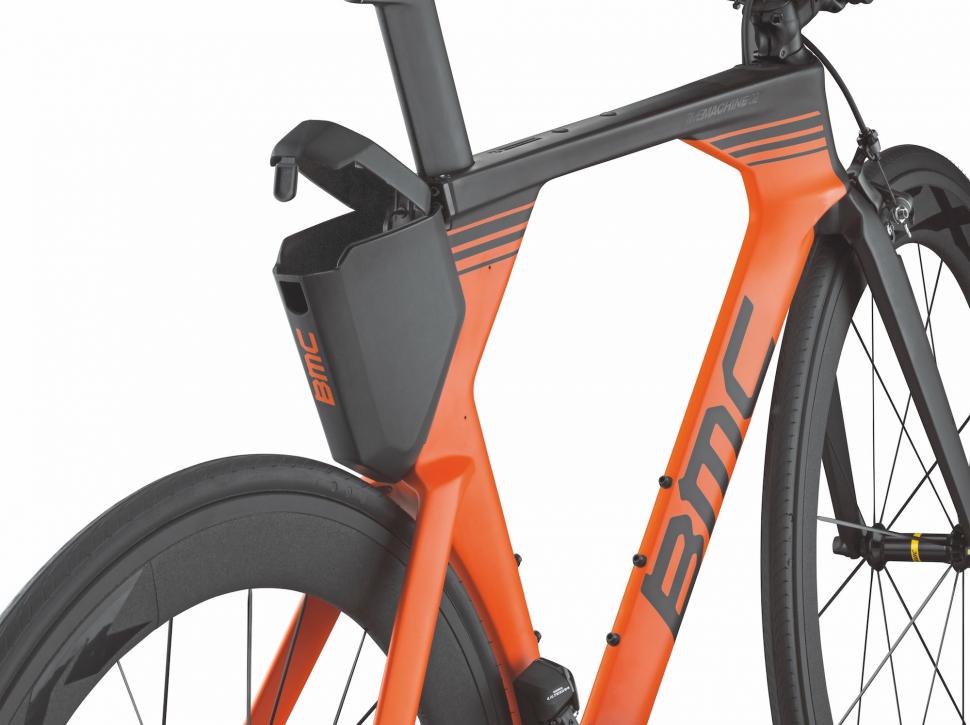 To ensure the bike can cater for the different rules of triathlon and UCI racing, BMC has developed a novel dual-mount seatpost that provides two effective seat angles, 80-degrees in the triathlon position or 71.5-degrees to be UCI legal. When the seatpost is in the forward position, a storage box can be fitted to the back of the post.

There is also a top tube mounted storage solution for your bento box. There are two bottle cage mounts with two positions on the down tube, a higher one that is easier to reach and a lower one that provides improved aerodynamics. Like the previous Timemachine, the brakes are integrated into the frame for cleaner aerodynamics. At the front, BMC has developed a Hidden Brake Booster Technology that it says increases the “brake-lever-pull to caliper-free-stroke ratio” to provide more clearance. The new bike will also take up to 28mm tyres.

BMC has also sought to make it easier to swap wheels with a new “Quick-pad” cartridge system, because deep-section carbon wheels are often much wider than aluminium training wheels. It’s also made it easier to disassemble the bike for packing into a bike bag for travelling. “With continued legendary SubA aerodynamics performance, it's recipe for success is clear - superior tube shaping, maximum component integration, and an extensive rider positioning system. For middle and long-distance triathlons or time trials, this is the must-have bike for races against the clock - like the one coming up this Saturday in Kona, Hawaii!,” says BMC.

The new BMC Timemachine will debut this week at the Ironman world champs, and will be available to buy from early 2017. There will be six builds available from Shimano 105 right up to SRAM Red eTap and Dura-Ace Di2, as well as two levels of technology in the Timemachine 01 or Timemachine 02. More at www.bmc-switzerland.com/int-en/timemachine and www.evanscycles.com