This is the new Colnago Concept aero road bike

With the launch of its new Concept aero road bike at Eurobike 2016, Colnago has made extensive use of the latest cutting-edge aerodynamic design to produce possibly its fastest ever road bike.

Colnago launched its first aero road bike, the V1-r a couple of years ago. When I reviewed it I was impressed by its fast and responsive handling but its aero performance wasn’t in the same league as its rivals and the rear direct mount brake was underwhelming. There’s no doubting the aero potential of the new Concept, Colnago has really gone to town with the aerodynamic design. It’s the most radical and modern looking bike to wear the fabled head badge that we’ve seen in many years. Stood next to the V-1r, it’s clear Colnago has made every attempt at producing the most aerodynamic frame possible, with extensive wind-tunnel testing and the adoption of the latest aero design features, many of which are increasingly common on aero road bikes.

The new Concept may make full use of the latest aerodynamic design, but the name comes from a bike credited with being the company’s first carbon creation when, back in 1986, it partnered with Ferrari to produce a radical bike ahead of its time that sadly never made it into production. But the partnership with the automotive manufacturer and its expertise with carbon fibre did eventually lead to the C35, one of the earliest carbon frames when it was sold in 1989. You can see some good photos of Colnago’s early carbon creations here. 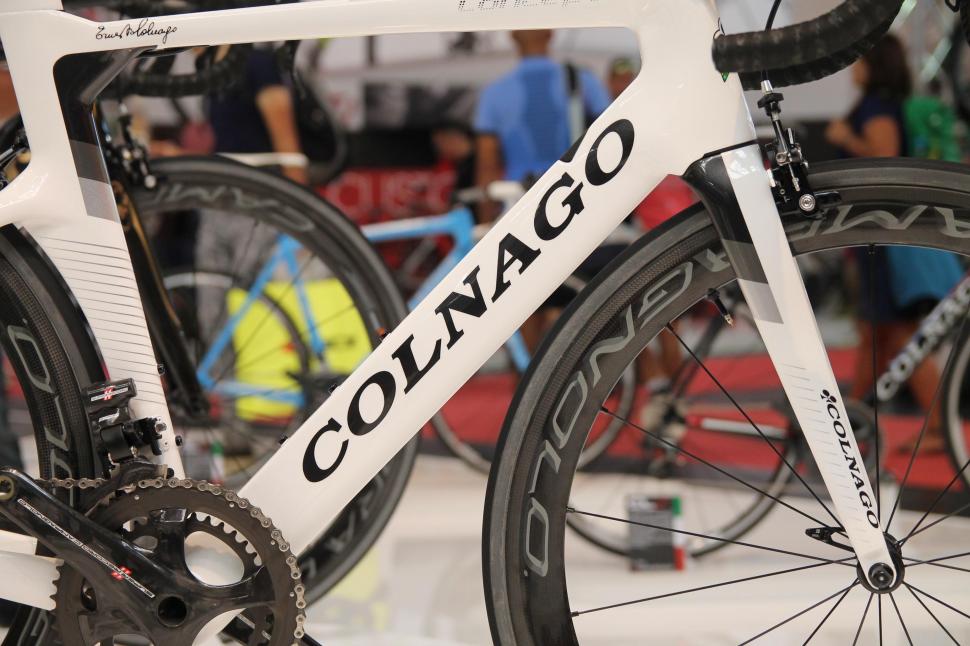 “This frame has been developed to be as fast as possible, and represents continuity with the original Colnago Concept project – the first carbon fiber frame, developed by Ernesto Colnago in collaboration with Enzo Ferrari in 1986,” says the company in its press blurb. 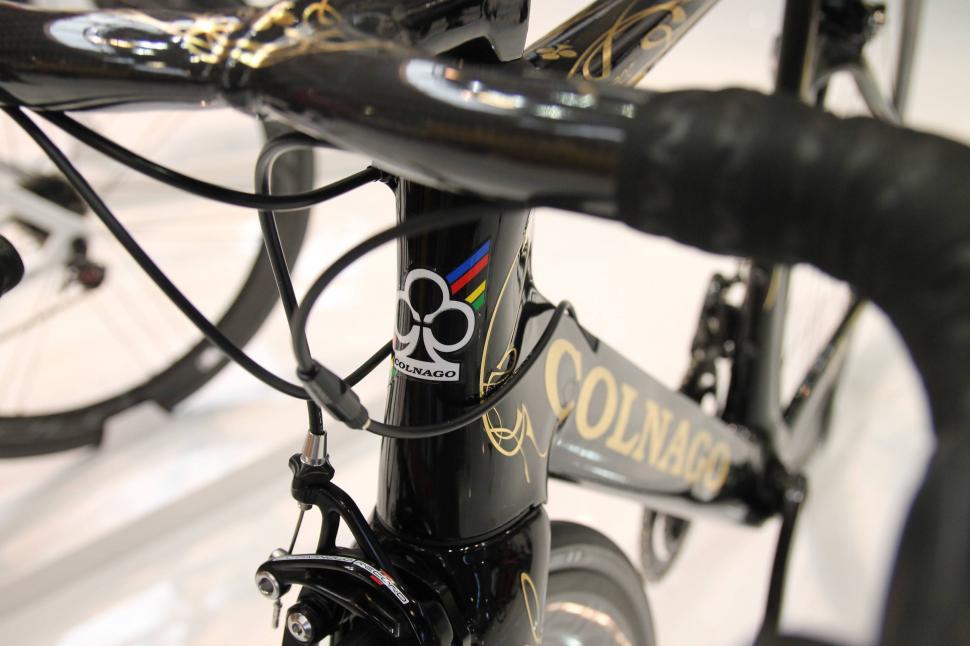 Shaped by extensive testing in a wind tunnel with 41 versions of the frame trialled, it’s no surprise that there is a passing resemblance to other aero road bikes on the market - there are only so many tube shapes and design tricks you can employ to reduce drag around the bicycle. Colnago hasn’t released any wind-tunnel data but we’ve asked them for some figures. 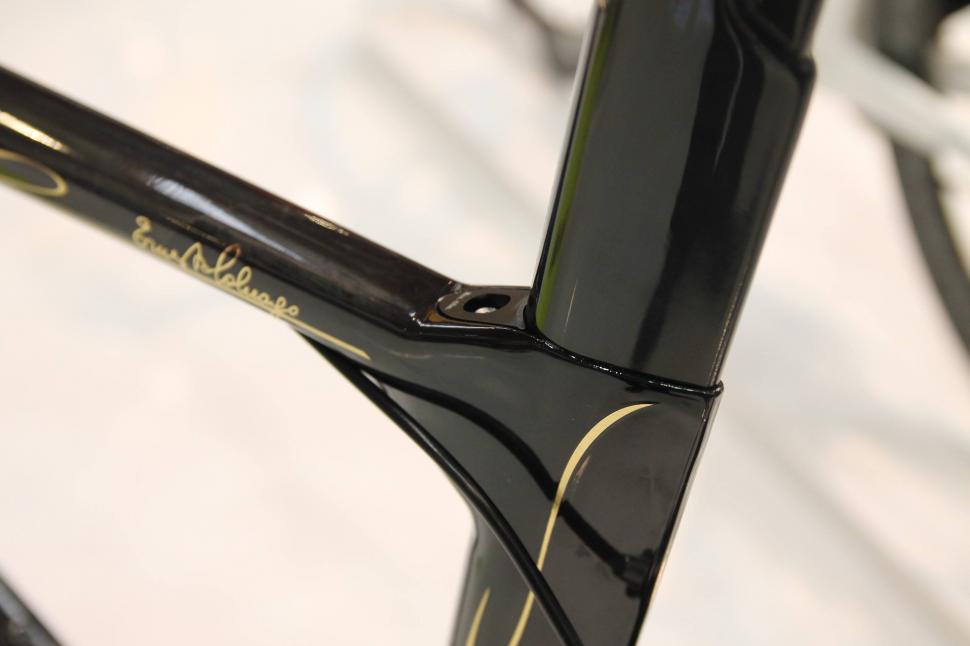 What you get is a frame with a truncated profile down tube (the rear section is chopped off to comply with the UCI rulebook), a rear wheel hugging seat tube and aero seatpost with the seatclamp integrated into the top tube and a very compact rear triangle with the seatstays meeting the seat tube just above halfway up. All cables are internally routed and it’s using direct mounts front and rear, but it has shunned fitting them in inconvenient locations as it did on the V1-r and placed them where you normally expect to find brake calipers. There’s no sign of a disc brake version at this stage, but it wouldn’t surprise us if it’s working on that. It’s at the front of the bike that aerodynamics is critical. Colnago has used a fork based on the V1-r design but made it a little more aero and pushed out the clearance so there’s more space between the fork and wheel, and it’ll take a wider tyre - there’s space for 28mm tyres front and rear.

There’s also a new aero handlebar and stem. It’s not a one-piece design, however, so you can easily change the stem length to suit your position requirements, but there are no exposed bolts on the stem and the handlebar has a teardrop profile to the tops. To smooth airflow around the bars Colnago has developed aero spacers that taper the junction between the stem and handlebar. A regular handlebar and stem can easily be fitted to the Concept if you want to use another brand of finishing kit. In an attempt to provide some compliance - aero road bikes aren’t universally known for offering smooth and comfortable rides - it has developed special headset cups made from a carbon, nylon and elastomer material that provides a small degree of vibration damping. Colnago doesn’t specify exactly how much movement is possible.

Borrowed from its other road bikes is the ThreadFit82.5 bottom bracket, which uses threaded aluminium cups that carry the bottom bracket bearings. Colnago is confident this design “combines the reliability and practicality of a threaded (BSA) bottom bracket with the added width and rigidity of a press-fit shell.” Weight has also been high on the agenda, and the Concept has a claimed frame weight of 990g with a 400g fork. Aero bikes do carry a weight penalty over regular road frames, there’s no getting around the extra weight of the bigger tube profiles required to smooth airflow, but manufacturers are getting that gap between regular road bikes and aero road bikes down.

The Concept has UCI approval and we’ve heard rumours Colnago is looking at reentering the World Tour (it has been absent for several seasons) so we could see this new aero bike being raced at the pointy end of a pro race before too long. There are eight sizes from 51 to 62cm to choose from and a range of builds, though UK distributor Windwave will only be bringing framesets in. We don’t have a UK price yet but expect it to be C60 money.