The Merida Scultura Disc Team has just arrived here at road.cc for testing, a lightweight race bike with a top-level Shimano Dura-Ace groupset, hydraulic disc brakes and a £6,500 price tag. If that superbike price tag puts you off, other Scultura Discs are available from as little as £850.

After the £9,500 Bianchi Oltre XR4 and the Pinarello Dogma F8, this is the third very expensive bike to have arrived at road.cc in the past couple of weeks. Don’t worry, we’re not switching to reviewing only superbikes; it’s just the way things have worked out lately. Normal service will be resumed shortly.

Now, before we start, you could argue with the ‘race bike’ tag in that the UCI has suspended the use of disc brakes for road competition. There have been rumours that disc brakes will be permitted again soon, but nothing concrete has been announced. We take that on board, but even if disc brakes were never allowed in the pro peloton again (they will be), this is a proven race bike with disc brakes.

Check out our review of the Merida Scultura 6000 from earlier in the year. 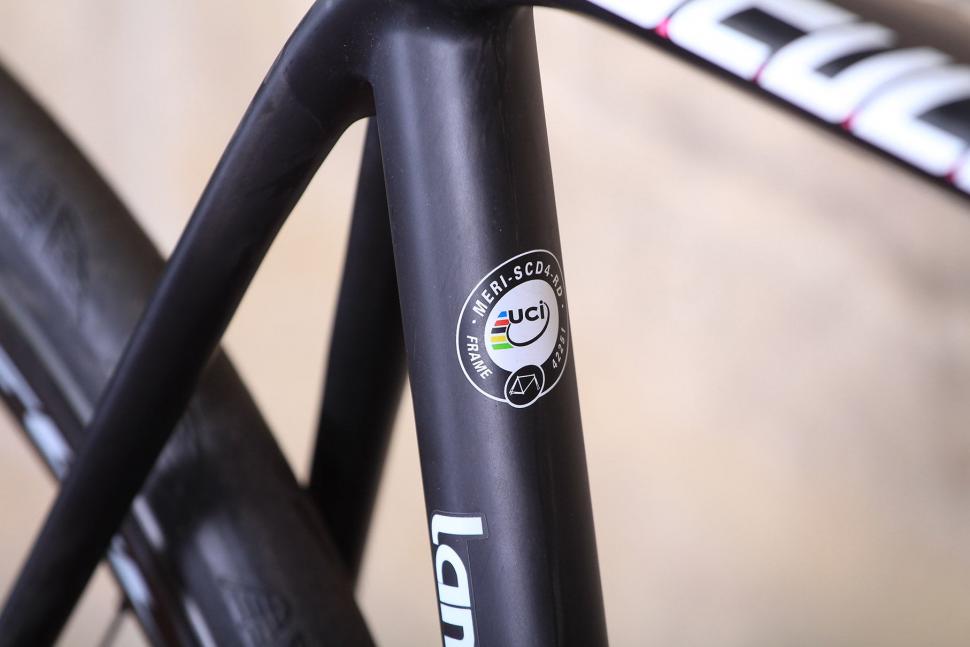 The Scultura is the lightweight road bike in Merida’s range. It has aerodynamic elements but the Reacto is the real aero bike in the lineup. The Scultura is available in several rim brake builds.

Despite the UCI’s current position on disc brakes, Merida remains committed to their use in road cycling. If you’re cynical – and you probably are – you might argue that the brand has little choice but to back disc brakes after spending time and money developing a high-end bike like this. 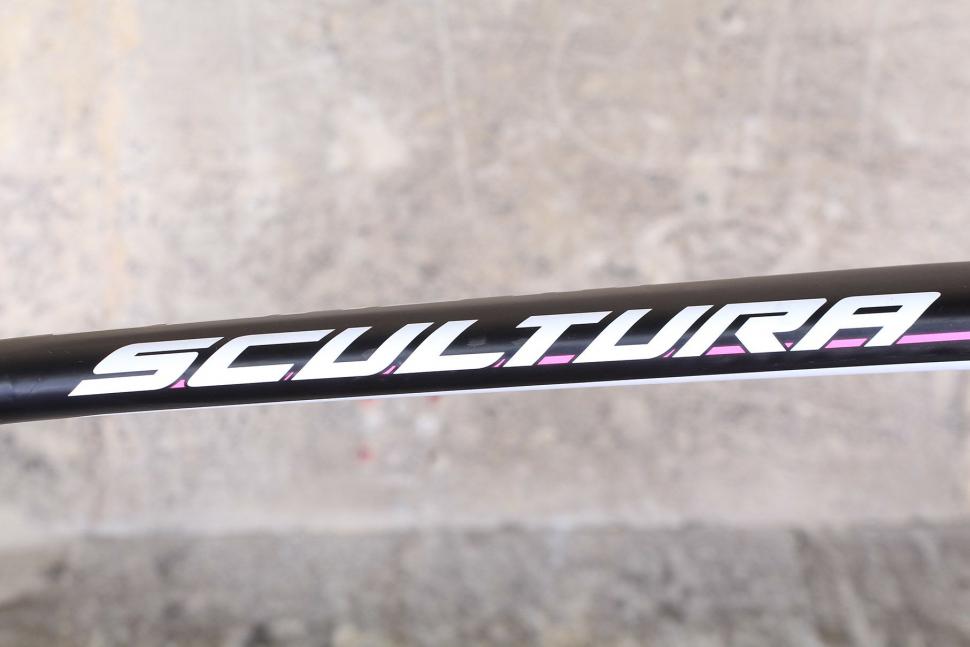 According to Merida, “Disc brakes add a small amount of weight to a bike, but compared to rim brakes the following advantages cannot be underestimated:

Feel free to argue the toss about that in the comments below... after I've gone.

Merida says that the Scultura Disc “combines the comfortable but also stiff and efficient riding characteristics of the rim brake variant with the general benefits of disc brakes”. 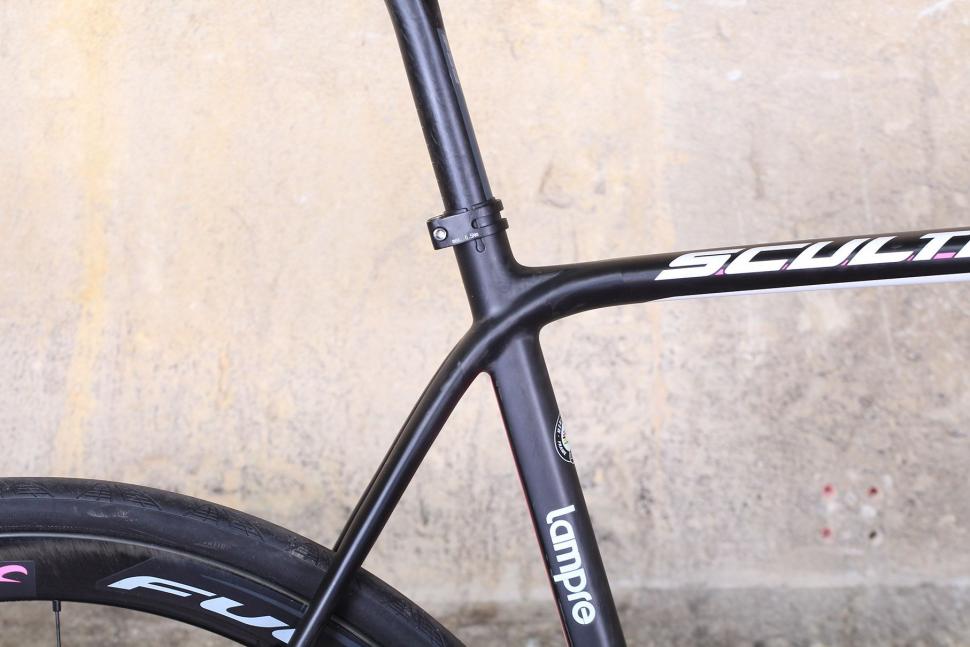 The Scultura Disc is available in three frame variants, two carbon-fibre and one aluminium. Let's crack into some more bullet points, seeing as Merida started it.

• The top-level Scultura Disc CF4 weighs a claimed 900g. This is the one used by Team Lampre-Merida, and the one we have here.
• The CF2 weighs just below 1000g, according to Merida.
• The Lite, the aluminium model, weighs under 1,500g.

The CF4 is built to a race bike aggressive geometry while the CF2 and the Lite frames are more relaxed although still performance orientated.

The stack height (the vertical distance from the centre of the bottom bracket to the top of the head tube) is 592mm and the reach (the horizontal distance between those points) is 409mm. Those figures suggest that reviewer Jez will be riding in quite a low and stretched riding position. Merida says that the Scultura Disc is almost identical to the rim braked version in terms of head tube and bottom bracket stiffness, comfort and aerodynamics.

The chainstays are slightly longer – by 8mm – to allow clearance for tyres up to 28mm wide, but the only other differences are related to the disc brakes, adjustments having been made to the fork and the rear triangle to handle the one-sided disc brake forces. The Scultura Disc retains the NACA Fastback tube profiles of the rim brake model, designed for aerodynamic efficiency. In other words, the tubes are designed according to known aero shapes, but rather than the profile tailing off gradually, Merida chops it off square. It’s an approach taken by many other bike manufacturers, the idea being to maintain the aero performance while saving weight, avoiding handling issues in crosswinds, and staying within UCI equipment rules.

The thru-axles on the CF4 are the RAT (Rapid Axle Technology) design introduced by Focus to allow for fast wheel changes.

The CF4 and the CF2 both use flat mount callipers front and rear. The carbon models across all price ranges feature Merida’s new Disccooler design (above). That calls for an explanation.

“While front brakes are always well-cooled thanks to constantly being exposed to the oncoming airstream, the performance of rear brakes benefits from active heat management,” says Merida. 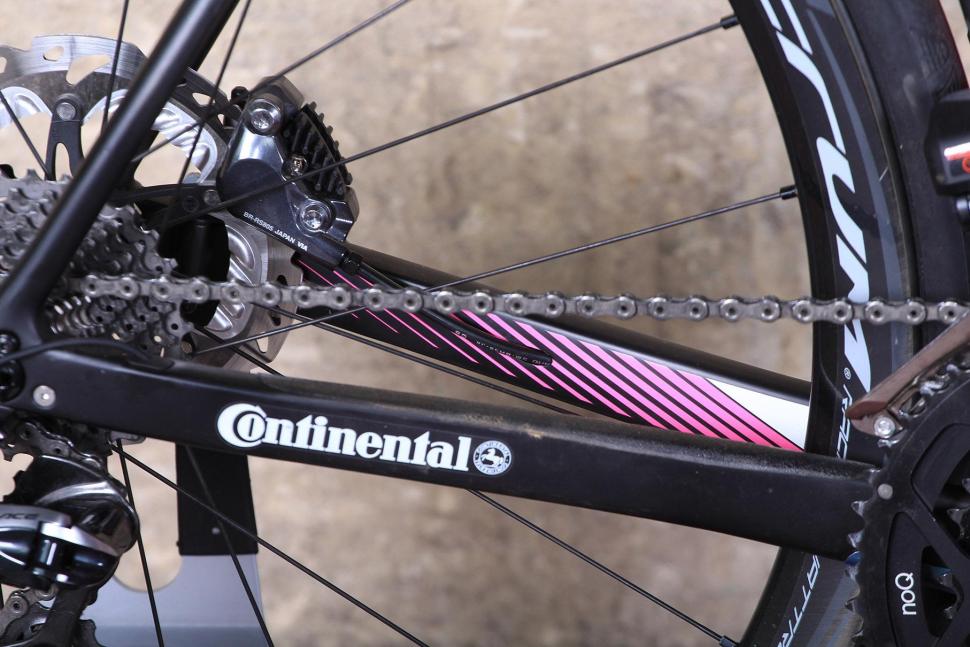 “In this position, it effectively dissipates the uprising heat through CNC-milled cooling fins. Tests confirm that during a four-minute brake the temperature is reduced by roughly 35°C with the Disccooler.”

We’re not sure of the exact nature/protocol of those tests so that 35°C figure doesn’t mean a lot, but you get the idea. So, that’s the frame taken care of for the time being. More than enough, some might contend. The full carbon fork that slots in there has a tapered steerer that spins on a 1 1/8in bearing at the top and a 1 1/4in bearing at the bottom. The Scultura Disc Team is built up with Shimano’s top-level Dura-Ace Di2 groupset... ...although the chainset is a Rotor 3D with round NoQ 52/36-tooth chainrings (as opposed to Rotor’s non-round Q-Rings). The cassette is 11-28-tooth. The carbon-fibre handlebar is an FSA K-Force with a compact drop while the stem is from FSA too – an OS99 that’s made from 3D forged and CNC machined AL2014 with a unidirectional carbon weave skin applied over the top. 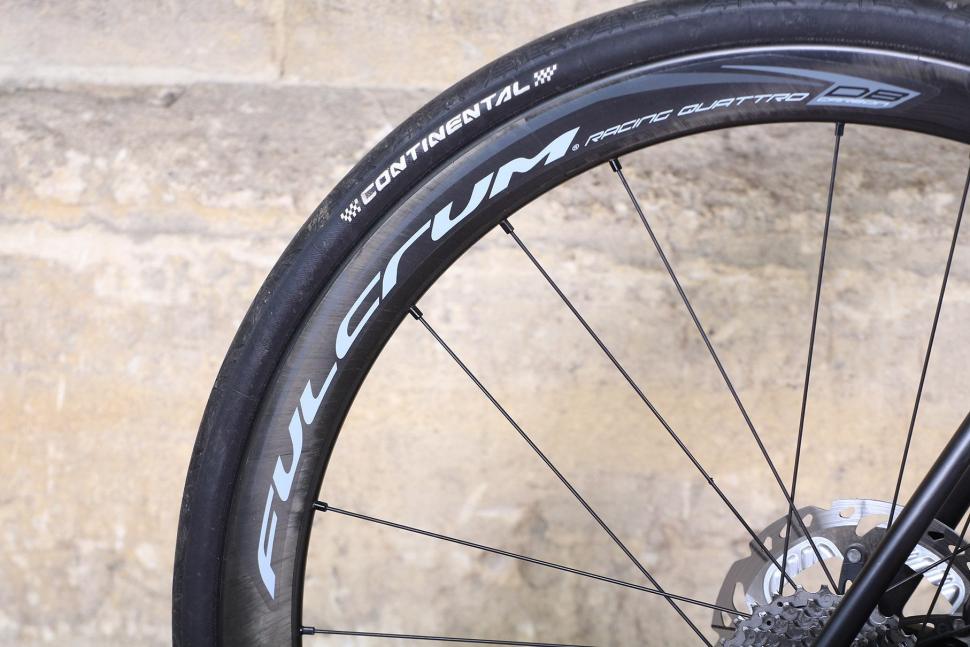 The wheels are Fulcrum Racing Quattro Carbon Discs fitted with Continental Grand Prix 4000S tyres. These are a 25mm width although, as I said, there’s enough space for 28s. The CF4 carbon-fibre frame is also available in a Shimano Ultegra Di2 build with DT Swiss R23 Spline wheels for £4,000.

The CF2 frame mentioned earlier is available in two Shimano Ultegra builds. The Scultura Disc 5000 comes with Merida’s own wheels for £2,100, while the £2,400 Scultura Disc 6000 has Fulcrum Racing Expert wheels. There are three models built around a 6061 aluminium triple-butted frame and full carbon fork. The £850 Scultura Disc 200 has mainly Shimano Sora components, the £1,300 Scultura Disc 400 is Shimano 105 based, and the £1,500 Scultura Disc 500 is a Shimano Ultegra (mechanical) build. It's a pretty Shimano-based lineup, then!

The £6,500 price tag makes the Merida Scultura Disc Team a superbike in the eyes of road.cc. In the road.cc Superbike Shootout 2015-16, we set the figure for qualifying as a superbike at £3,000. It was totally arbitrary, but we had to choose something. Whatever the cutoff next time, the Scultura Disc Team will be above it. We’ve also reviewed the Look 795 Aerolight, priced at £4,449.99 for just the frameset. A complete bike with a Shimano Dura-Ace mechanical groupset and Mavic Aksium Elite wheels is £6,209.99. We described it as “an innovative aero road bike that delivers plenty of speed, but only for those with a large budget”.

Right, that’s the background. Jez will be back with a review of the Merida Scultura Disc Team soon.