The brand new 3T Exploro aero gravel bike has arrived for testing here at road.cc, so let’s take a look before we climb aboard.

First of all, though: an aero gravel bike? Since when was that a thing?

The Exploro is a project from Gerard Vroomen, the Cervelo co-founder who’s now part owner of 3T. Vroomen has pedigree, to say the least, as far as aerodynamics are concerned. 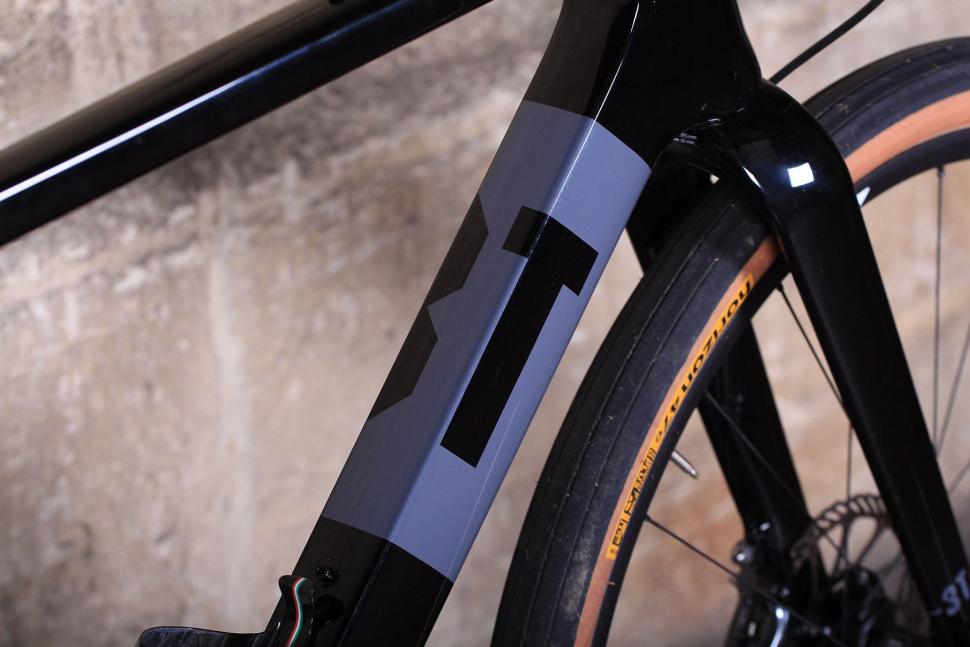 The premise for the design is that everyone wants to go faster for a given amount of effort. Aerodynamics might not be your top priority in a gravel bike but, other things being equal, we’d all like a little free speed, wouldn’t we? If you couldn’t care less about your speed, fair enough, perhaps the Exploro isn’t for you – but that would make you a very unusual cyclist. So that’s the rationale for an aero gravel bike. How has 3T gone about producing it?

One of the key features is what 3T calls its Sqaero tube profiles, a portmanteau meaning that the tubes are shaped for aerodynamics with the trailing edge squared off. I’m sure you could have worked that out for yourself but, you know, just in case. The idea is that the airflow behaves largely as if the profile had a long, tapering tail. As well as reducing drag, this profile is designed to provide strength and stiffness without making the frame too difficult to handle in crosswinds. 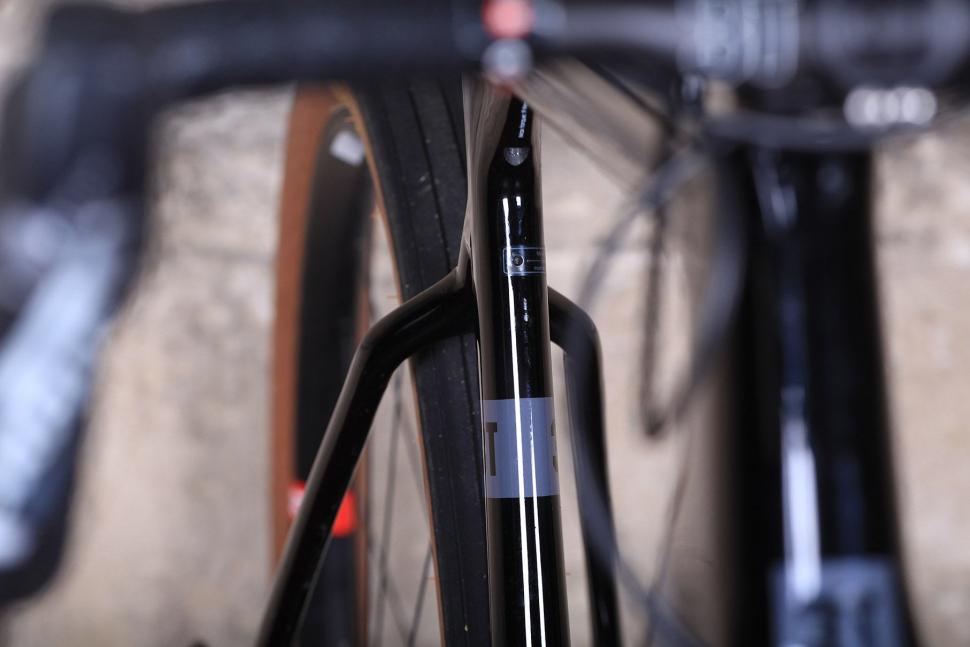 We’re used to seeing a lot of chunky tubes these days but the Exploro’s down tube really is something else. It’s 50mm across while the seat tube is 25mm wide. ‘Chunky’ and ‘aero’ might not usually go hand in hand but the down tube has to be so large “to pick up the airflow coming off a wider cross or mountain bike front tyre and lead it on to the water bottles”, while the idea is that the seat tube “aerodynamically disappears” between the bottles and the rear tyre. The head tube, seatstays and seatpost also use Sqaero profiles. 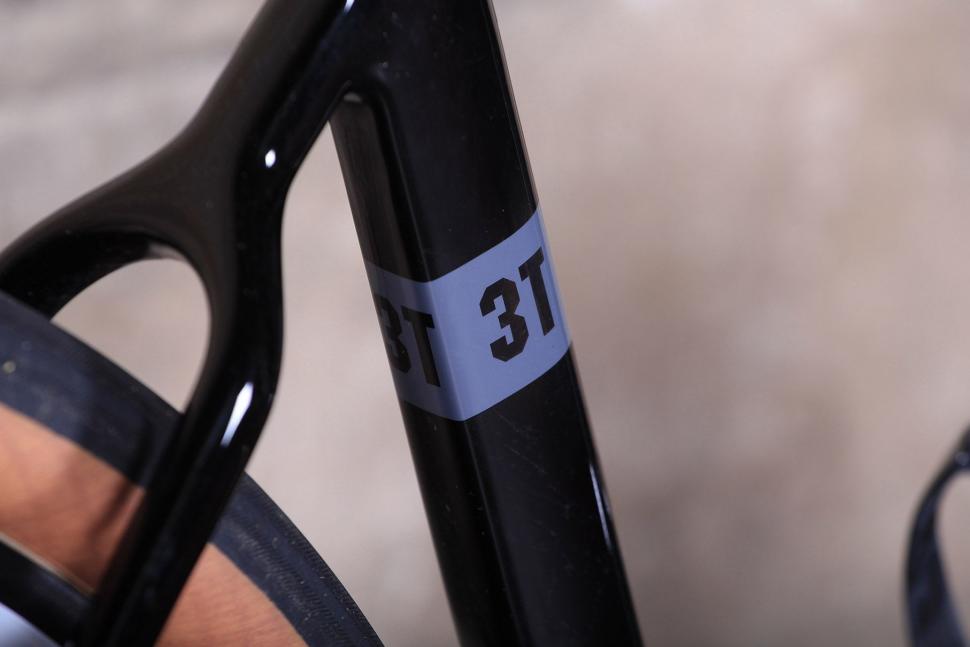 The result of all this aero shaping, according to 3T, is that at 20mph (32km/h) the Exploro saves 7 watts over a round tube frame with the same tube widths, the same frame details and the same components. At a less realistic 30mph (48km/h) it would be a 24 watts saving, 3T says.

3T also claims that an Exploro with 40mm knobby cross/gravel tires and two water bottles fitted is faster than the equivalent round tube bike is with 28mm slick road tires and without bottles. 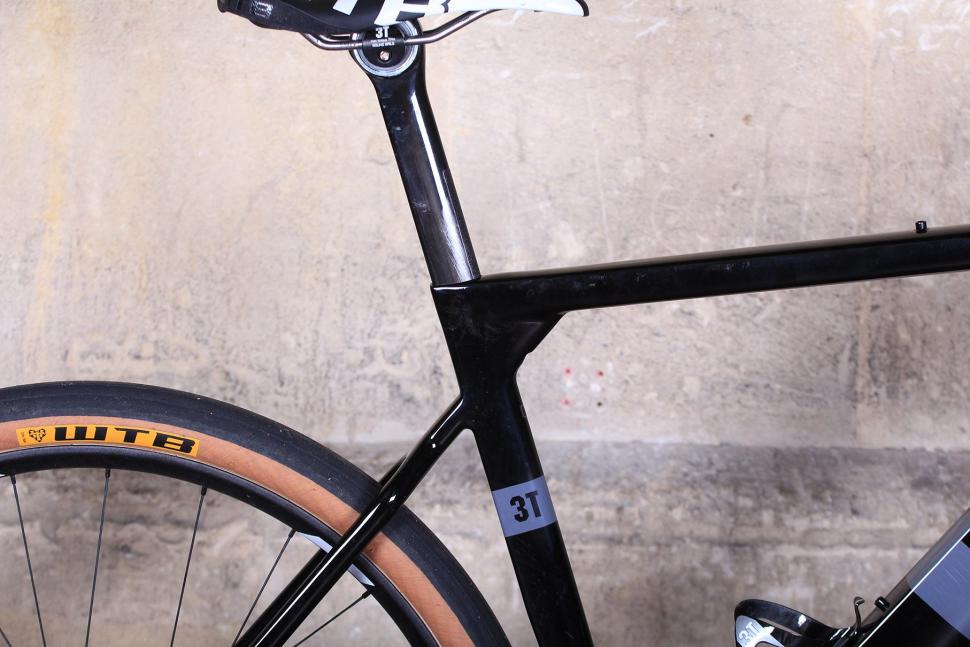 3T wanted to keep a road bike’s Q factor (the distance between the pedal attachment points) and with clearance for such wide tyres that didn’t leave much space for chainstays, so it put a drop in the driveside one to move it out of the way. Vroomen did something similar in his Open UP design. All of the cables are routed internally and a tiny window in the seat tube allows you to check that there’s sufficient seatpost inside the frame. You can choose between two bottle cage positions on the down tube, although you need to opt for the upper one if you want to attach a bottle cage to the seat tube too. If you’re only installing one, the lower position is the more aerodynamically efficient option. You also get two attachment anchors for top tube bags. A couple of other things worth mentioning here are: the brakes are post mount and you don’t get any mudguard/rack mounts here.

The Exploro is built to what 3T calls a performance gravel geometry. It’s designed to be both fast and comfortable – far closer to a road or cyclocross position than to a mountain bike’s. The stack (the vertical height between the middle of the bottom bracket and the top of the head tube) is 576mm and the reach (the horizontal distance between those points) is 390mm. The stack divided by the reach is 1.48. Those figures suggest a ride position that’s more upright than that of a standard road bike, but not by a long way. 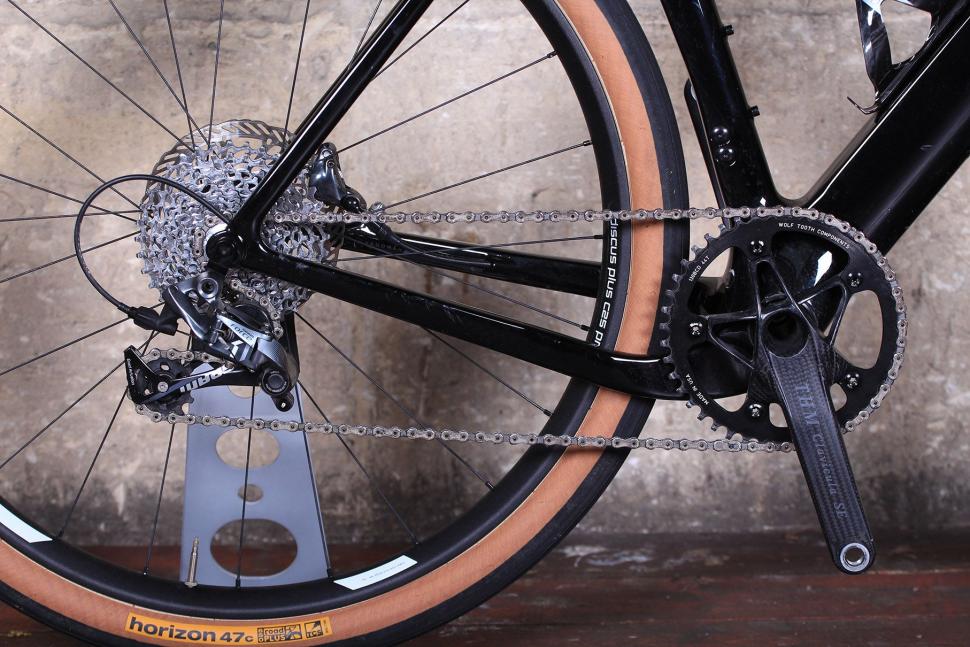 The steering is designed to be agile and 3T has opted for 415mm chainstays – unusually short for a gravel or cross bike. 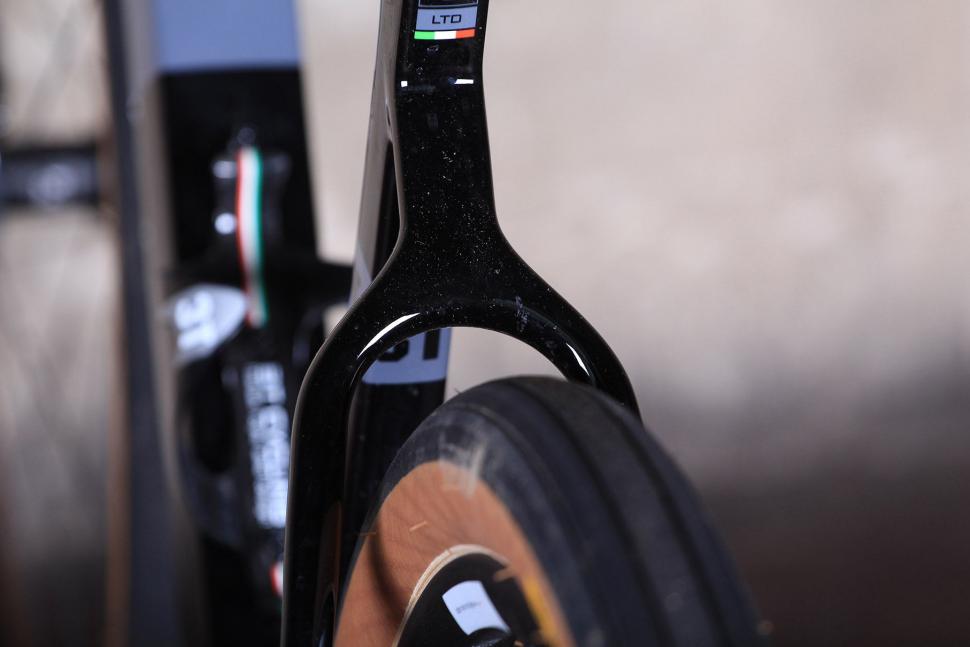 The Exploro uses thru axles, 15mm up front, 12mm at the rear. It can take 700c road and cyclocross tyres up to 40mm width (although that might depend on the exact rim/tyre combo you use), or you can go with 650b wheels and mountain bike tyres up to 2.1in wide. 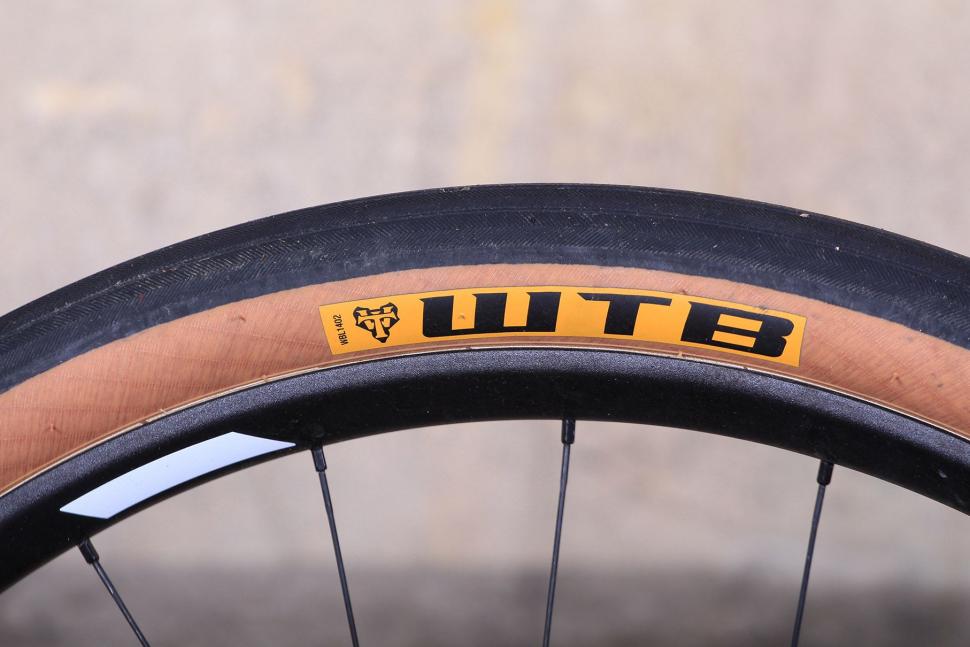 The Exploro is sold as a frameset but ours has come fitted with 3T’s own aluminium Discus Plus C25 Pro 650b wheels and WTB’s fairly smooth Horizon 47mm tyres. The groupset is 1x SRAM Force with hydraulic disc brakes and a THM Clavicular SE carbon chainset. This is a very high-end option that’s designed to be both stiff and lightweight. THM builds components at its own facility in Germany and these products are distributed by 3T Cycling, hence the inclusion of the chainset on this bike. It’s a 44-tooth chainring, by the way, matched up to a 11-36 cassette. The maximum size single or outer chainring you can fit is a 50-tooth, the maximum inner ring (if you have one) is 36T. 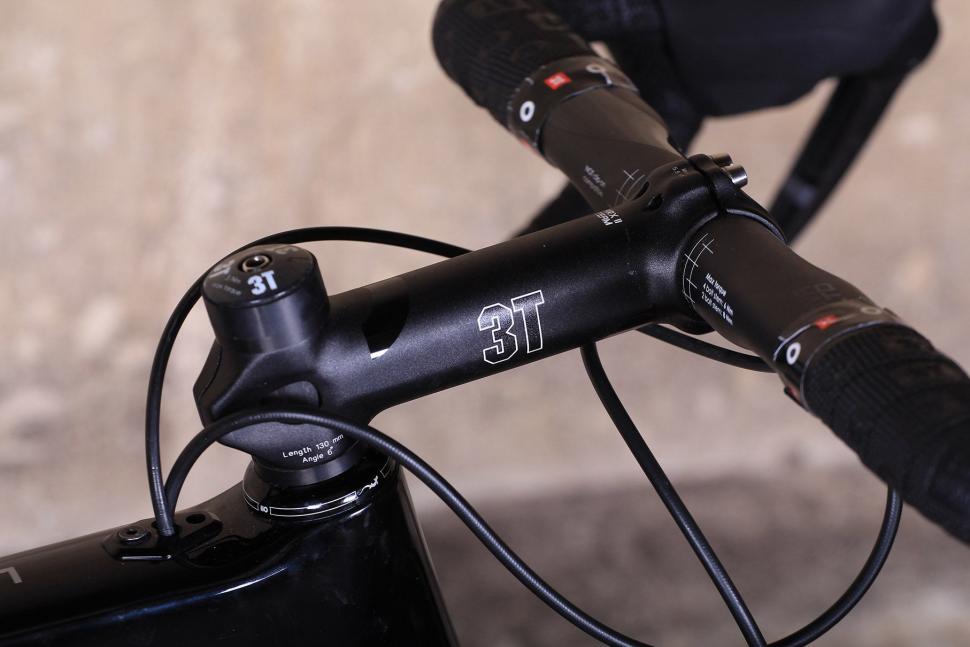 The handlebar and stem are 3T's own and the saddle comes from WTB.

The Exploro frameset is available in two different versions. They’re the same geometry but the carbon fibre differs. The Team version weighs a claimed 1,150g and is priced at £2,400 while the LTD model that we have here is a claimed 950g and it is priced £3,300. 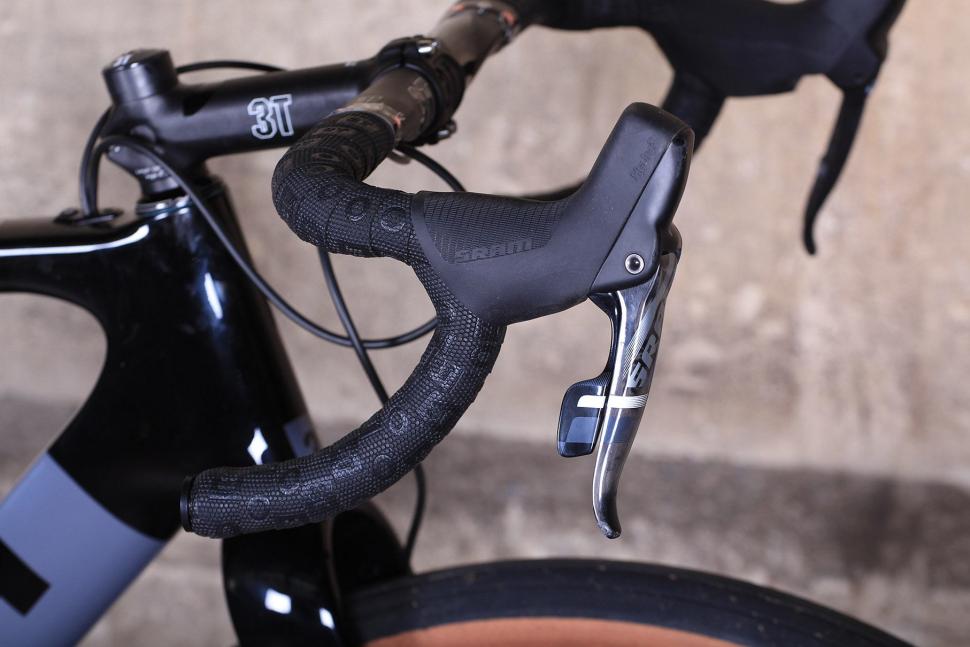 The 3T Exploro is comfortably the most expensive gravel bike that we’ve had in for review here at road.cc. The GT Grade Carbon Ultegra that we reviewed recently was £2,699 but, as the name suggests, it was a complete bike built up with a Shimano Ultegra groupset. We called it, “A versatile, fast and capable road bike that's happy in the rough”. The Genesis Datum 30 (£3,199), fitted with a Shimano Ultegra Di2 groupset, will take tyres up to 33mm, considerably smaller than those of the Exploro, but it’s still capable of exploring gravel paths and singletrack. It’s fast, sprightly and fun on the climbs, and it’s solid and stable on the descents.

We need to get the Exploro out on the roads and tracks because 3T are hassling for it back already. Look out for a review on road.cc soon.