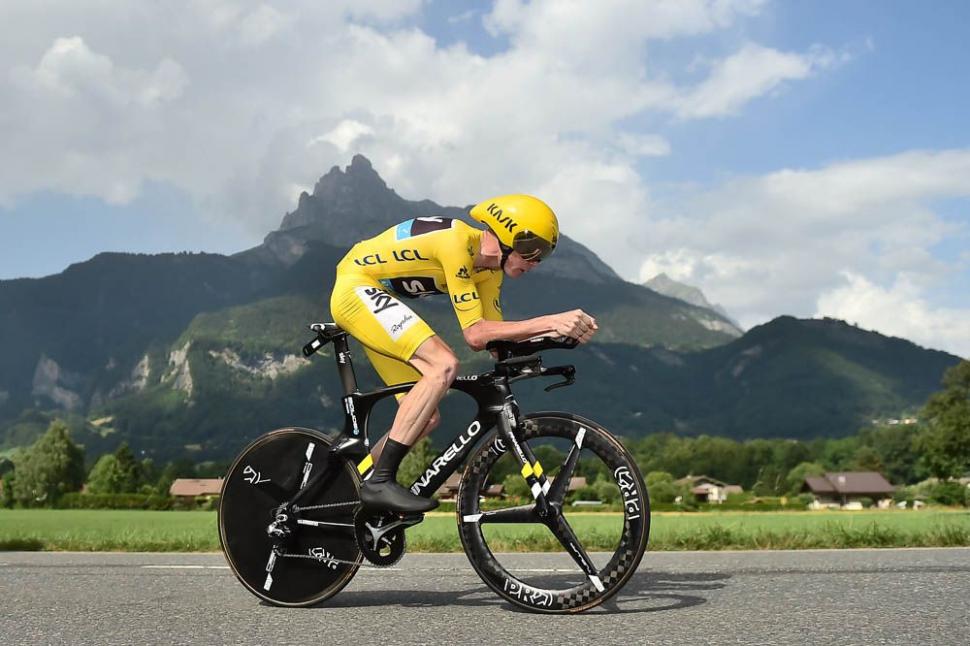 Yesterday’s stage 18 uphill time trial provided some interesting contrasts in bike and equipment choices for the racers, but Chris Froome proved a full time trial bike setup, including a disc wheel, aero helmet and skinsuit was the fastest combination. Of course, his supreme fitness and extraordinary time trial skills had a large part to play too.

Still, let’s not understate the importance the equipment choices made on a course featuring 765 metres of vertical gain and steep sections of 14% gradient, with a profile that must have been difficult to maintain a consistent pace on with a variety of gradients to deal with.

Most opted for a standard road bike with clip-on tri bars. This setup offered a lighter build for the steeper parts of the course and a more familiar riding position for those that haven’t spent much time on the time trial bike. Many were clearly just happy to amble along the stage and save the legs for the last couple of days of the race to Paris.

It was a different matter for the GC contenders, who took differing approaches. Though not a GC contender, Tom Dumoulin, the winner of the stage 13 time trial, was a favourite to win the stage, and duly spent most of the day in the hot seat after setting the fastest time.

Dumoulin chose a time trial bike but with the regular combination of a disc rear wheel and tri spoke front wheel swapped for a pair of shallow section rims. The reasoning behind the wheel decision presumably was to make the bike lighter, while benefiting from the aerodynamics and position of the time trial bike.

Onto the GC contenders and currently second overall, Trek’s Bauke Mollema took the opposite approach to Dumoulin and rode his regular Trek Emonda but with a disc rear wheel and deep-section front wheel and a set of clip-on tri bars. He finished 1:25 behind Chris Froome. Would Mollema have been faster if he had ridden Trek’s Madone aero road bike or even a full time trial bike Perhaps providing proof that Mollema chose the wrong bike, he finished 2 seconds adrift of Adam Yates. The young Brit rode a Scott Plasma time trial bike with a Dura-Ace C50 rear wheel and C35 front wheel. Like most riders, he also wore a skinsuit but he didn’t wear a time trial helmet like Froome, wearing his regular road aero helmet supplied by Scott, presumably deciding ventilation, on what was another hot stage, was a requirement alongside aerodynamics. How about Nairo Quintana? Like Froome, he went with a time trial bike, using Canyon’s Speedmax, which features details like integrated brakes and the stem and handlebar sitting flush with the top tube to reduce the frontal surface area. Instead of a disc rear wheel, he used regular Campagnolo Bora Ultra 50mm wheels and he also used a time trial helmet complete with a visor. He lost 1:10 to Froome.

And so to Chris Froome. He used Pinarello’s Bollide, the Italian company’s latest time trial bike, the same one he used in the previous time trial in this race, and even kept the same wheels, a PRO rear disc and tri spoke front wheel. He wore the new version of Kask’s time trial helmet, which has been developed just for the team, and features a longer tail than the standard version. It looks like he didn't get to wear Rapha's brand new skinsuit however, unless Rapha has been able to produce a special yellow version for Froome. 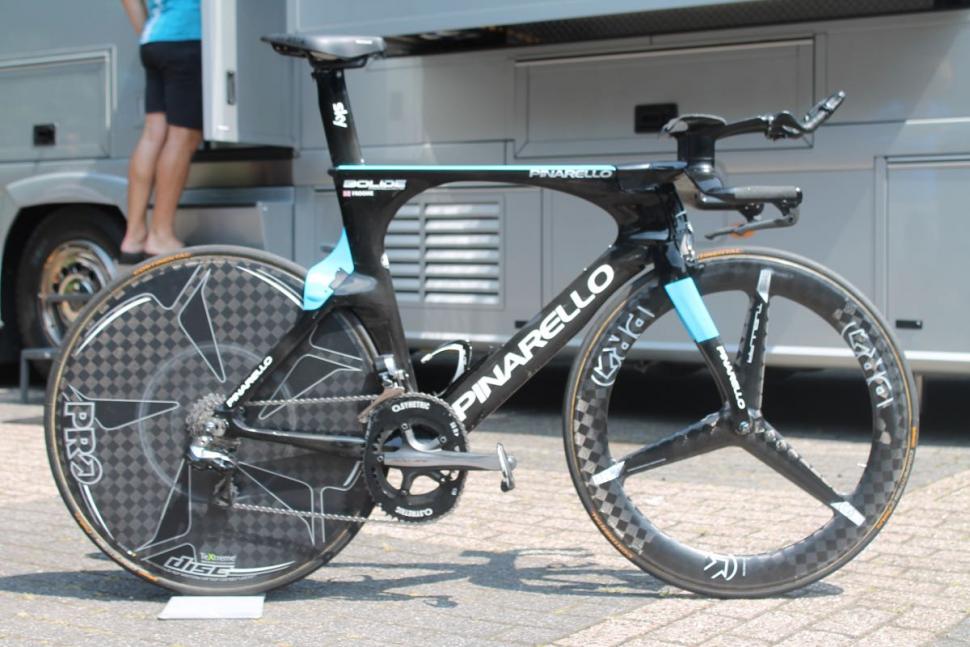 Here’s Froome’s Pinarello TT bike. Okay, this is actually his bike as pictured in the 2015 Tour de France, but it’s virtually the same bike. The most striking detail are the custom made tri bars that have been made to provide Froome with the exact position the team has decided is the most aerodynamic, and they probably save a bit of weight over the stock bars. Have a look at the bike in detail in this article. Did the riders make their own equipment choices or take advice? It’s most likely it would have been a joint decision between the rider and the team. Chris Froome says the team analysed the course and decided the full time trial setup would be the fastest, even though he was tempted to ride a road bike. It proved the right decision.

"I'm extremely grateful to have the support team behind me to help me with my decisions. When I looked at the parcours, I thought that I should use a road bike but after their analysis, we decided to go with the full TT set-up. With the Pinarello TT bike, we were able to save a lot of weight there so that I was able to ride a TT bike and not have to worry about kilograms. I was able to use a TT bike to get up the climb,” says Chris Froome speaking to Cyclingnews.

Being able to maintain the time trial position on such steep gradients was also key to making the decision work, and yesterday Froome put on a masterclass of time trial pacing and riding. He also had the legs for it as well.