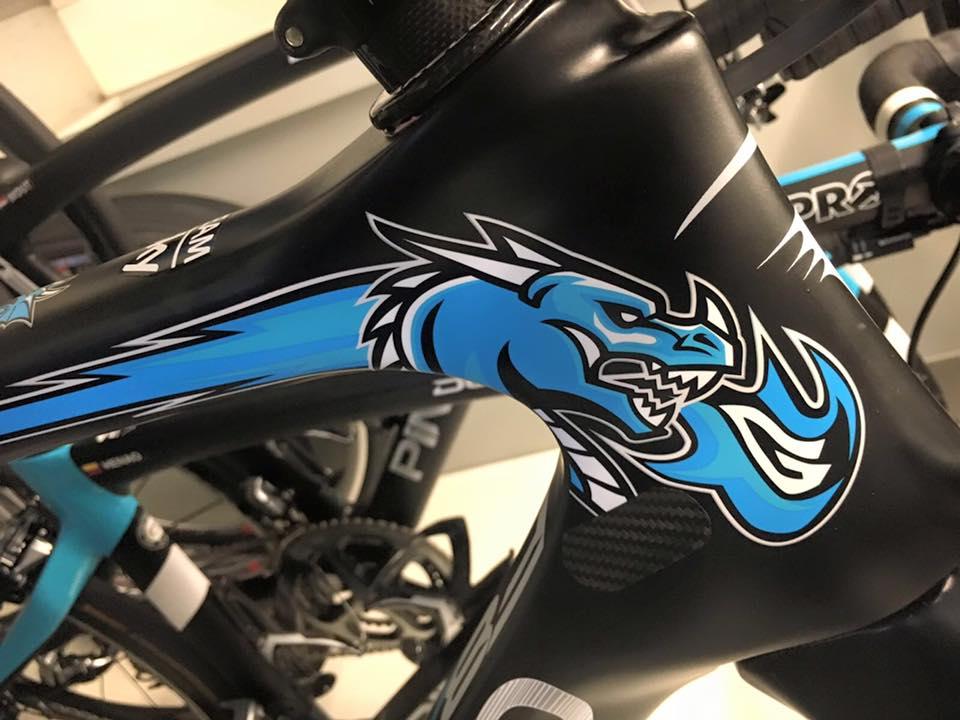 Team Sky’s Geraint Thomas is riding the Tour de France on a Pinarello Dogma F8 Xlight complete with dragon motifs on the top tube, a reference to his Welsh roots.

Yes, we know they’re blue dragons rather than red, but blue is Team Sky’s colour and there’s only so far it’s going to go in terms of personalisation. 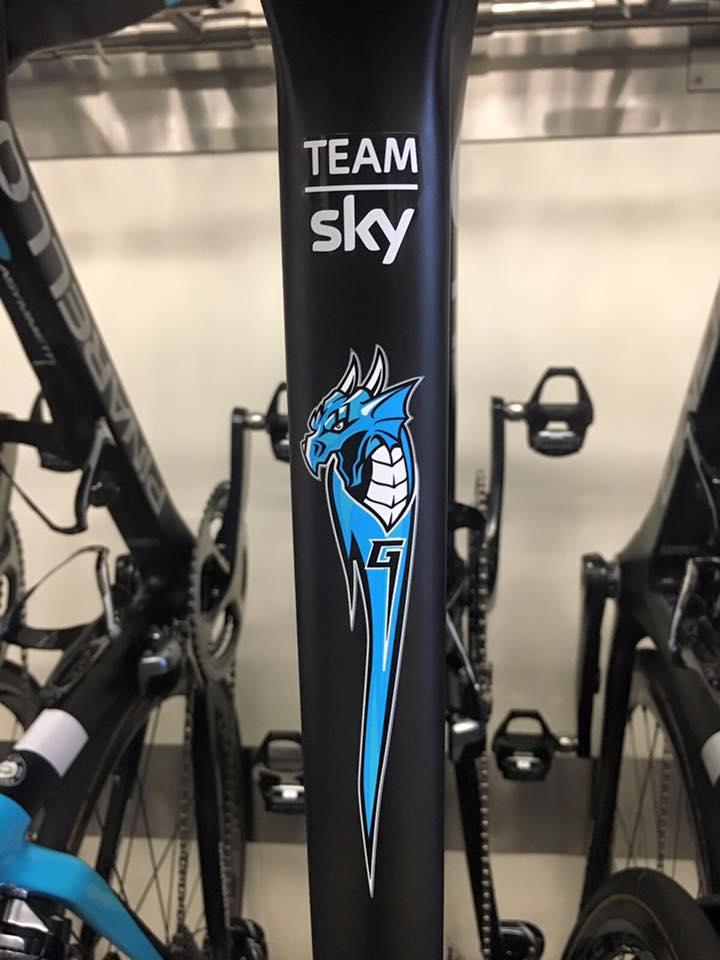 The letter G, which is how Geraint Thomas is most frequently known, is incorporated into the design on the upper face of the top tube.

We told you about the Pinarello Dogma F8 Xlight earlier in the week, a bike also ridden by Tour de France leader and G’s team-mate Chris Froome.

Check out our report on the Pinarello Dogma F8 Xlight.

Essentially, it’s a lighter version of the existing Dogma F8, as you’d probably guess from the name. It’s built to the same geometry, which is why Pinarello hasn’t needed to have it added to the UCI’s list of approved models of frames and forks. That approval process relates to shape. Any changes to geometry would mean that the frame would have to be approved again.

The difference is that Pinarello has trimmed weight off under the surface of the F8 Xlight. Pinarello says that the Dogman F8 Xlight frame weighs just 780g in a 54cm size, 80g less than the regular F8, while the fork is down from 360g to 340g.

The Dogma F8 Xlight comes with 69.8kg (154lb) rider weight limit. G’s body weight is usually given as 70-71kg although it’s certainly possible that he’s actually below that. He’s there or thereabouts, anyway. 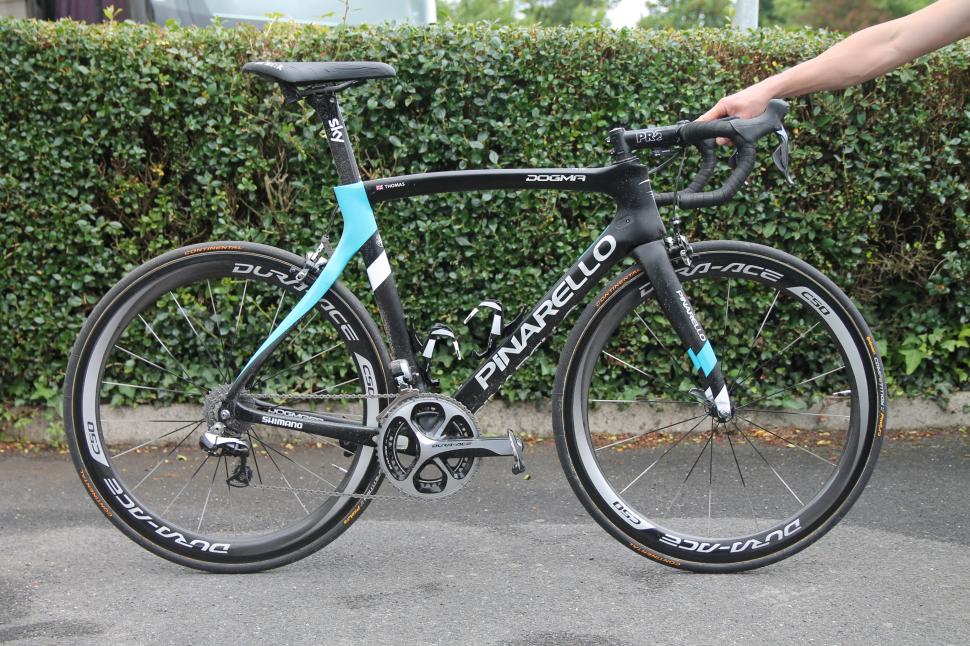 When we visited Team Sky at the start of the Tour de France we got the chance to check out G’s standard Dogma F8 (above) – without the dragons. It’s set up exactly the same as his Pinarello Dogma F8 Xlight. 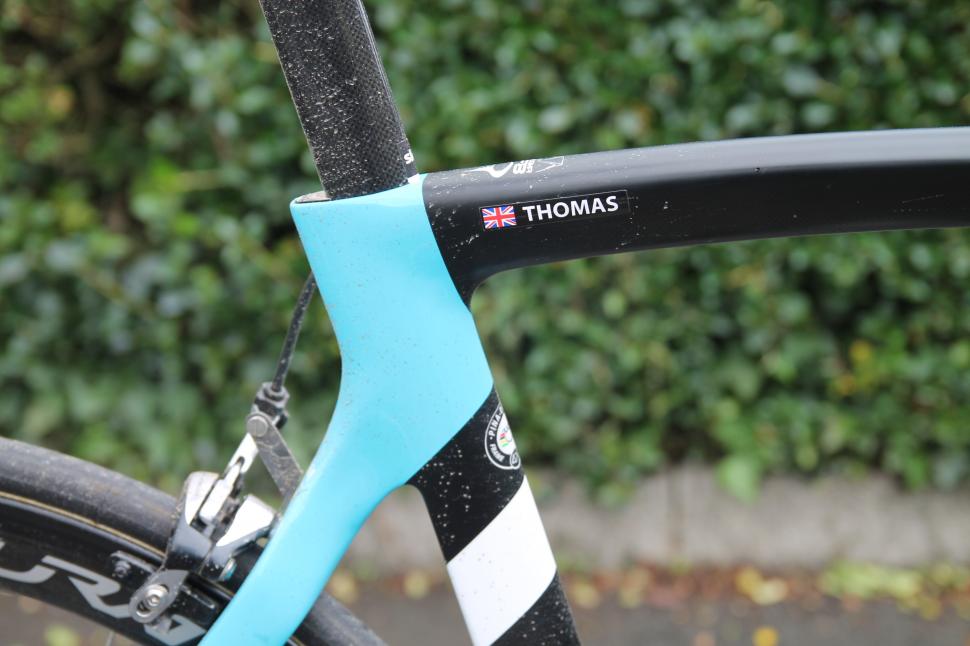 Team Sky is sponsored by Shimano and the riders use Di2 electronic groupsets. This is existing Dura-Ace rather than the new for 2017 R9100/R9150 version that we told you about a couple of weeks ago. This bike is equipped with a 53/39-tooth chainset. There’s a Stages power meter incorporated into the left crank. 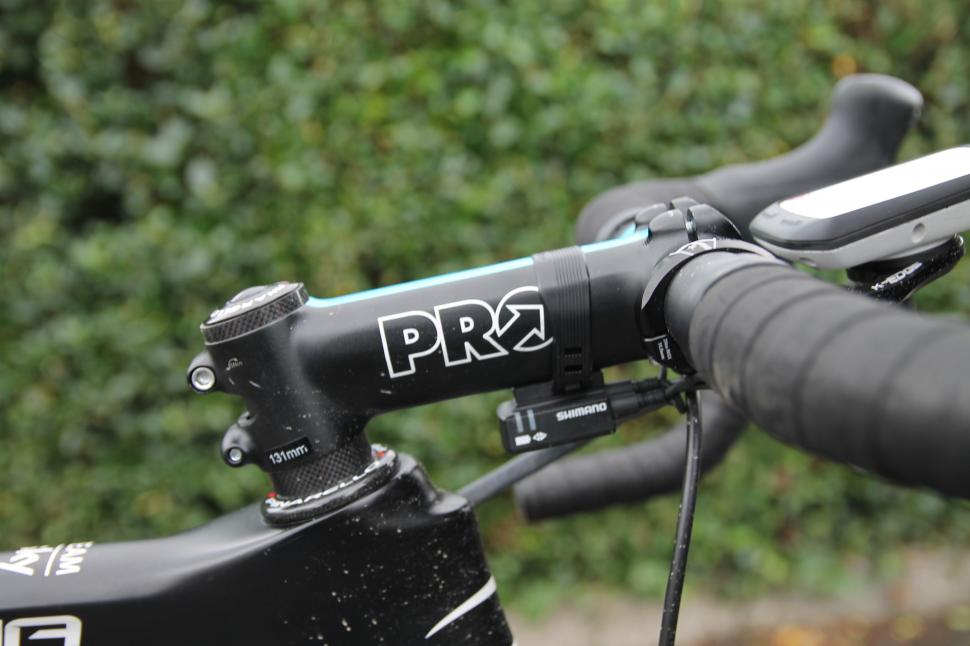 The stem is from Shimano’s sub-brand Pro. It’s a Vibe and 131mm long, according to a sticker on the side. The handlebar is from Pro too. 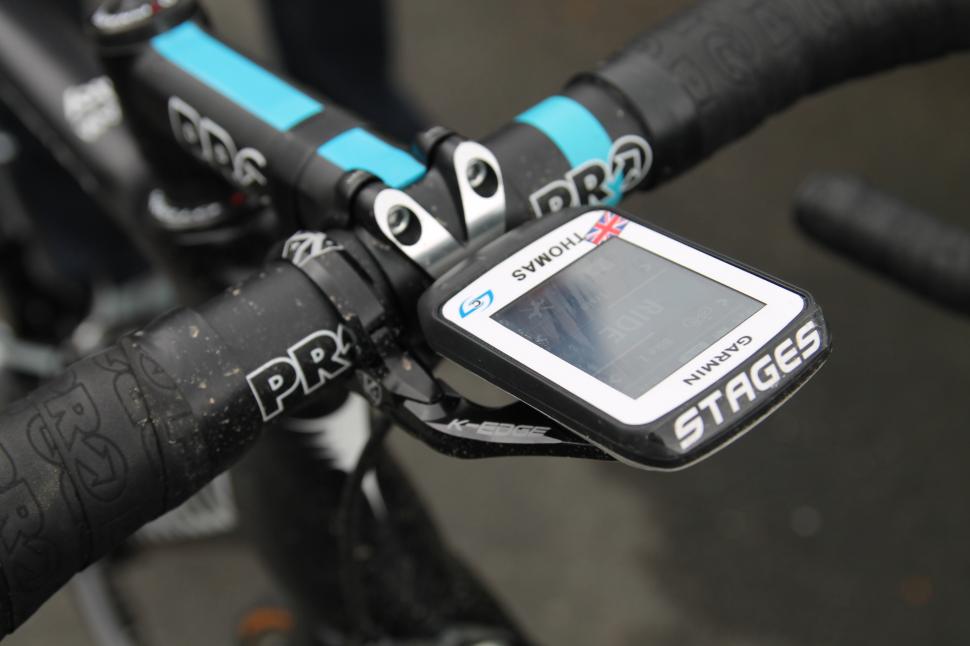 A K-Edge computer mount holds G’s Garmin Edge 510 – rather than the more up-to-date 520 – out front and in line with the stem. 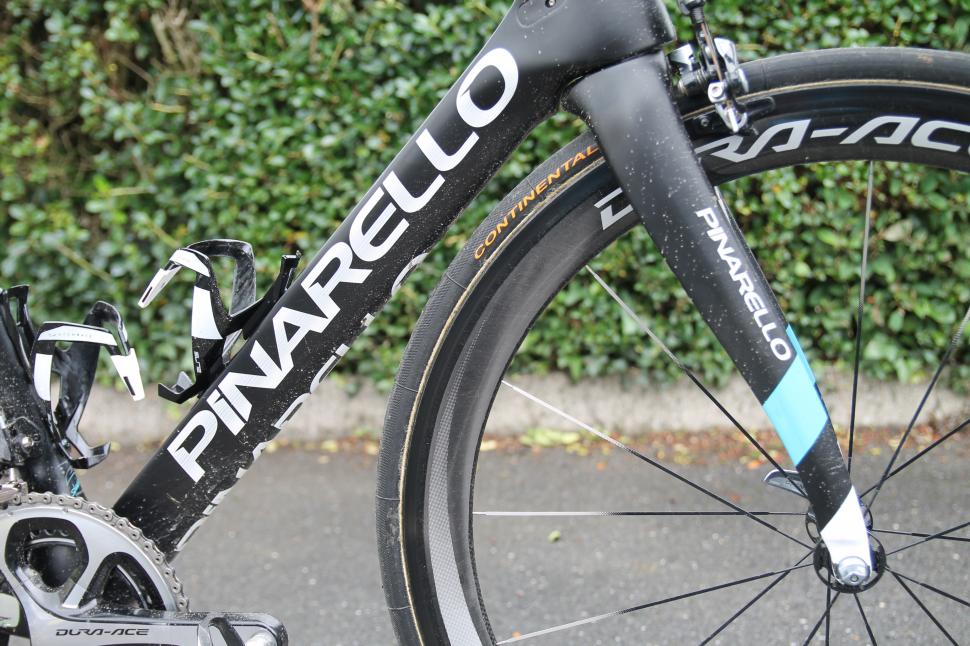 The wheels are Shimano Dura-Ace C50s. Shimano currently offers Dura-Ace wheels in several different depths: 24mm, 35mm, 50mm and 75mm. This is changing next year with 40mm and 60mm options being added in place of the 35mm and 50mm options.

The wheels are fitted with 25mm wide Continental Competition Pro Ltd tyres. You see these everywhere in the pro peloton. 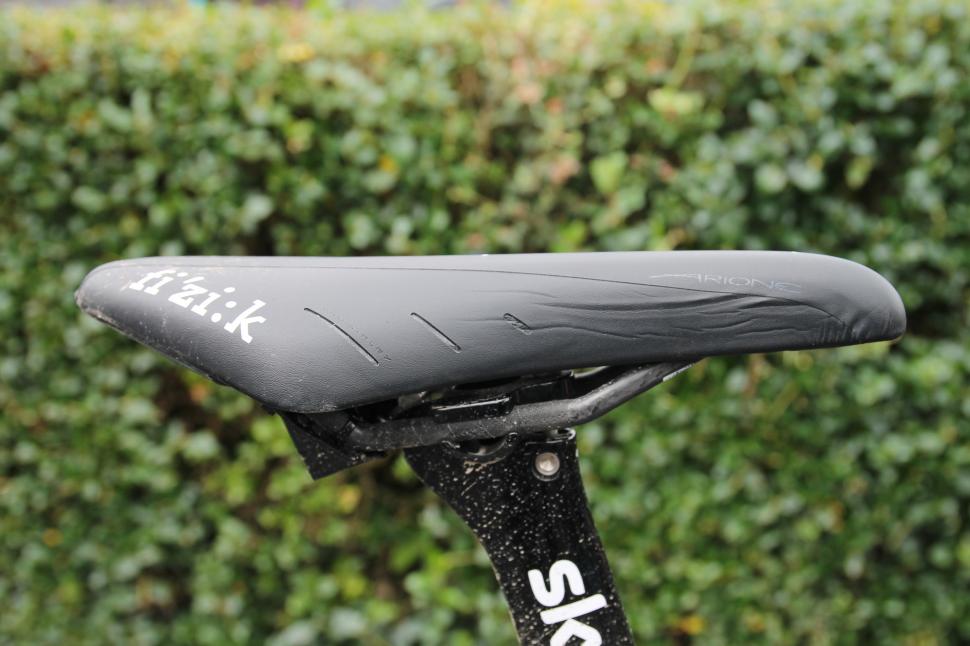 The saddle is a Fizik Arione but it’s much more deeply padded than most Ariones out there. With braided carbon rails, it could be the triathlon Arione K1, although when we visited the Team Sky service course earlier in the year we were told that riders had had custom Ariones made with deeper than normal padding for the Cobbled Classics, and some had decided to stick with them for normal road races.

Read our report from the Team Sky service course here. 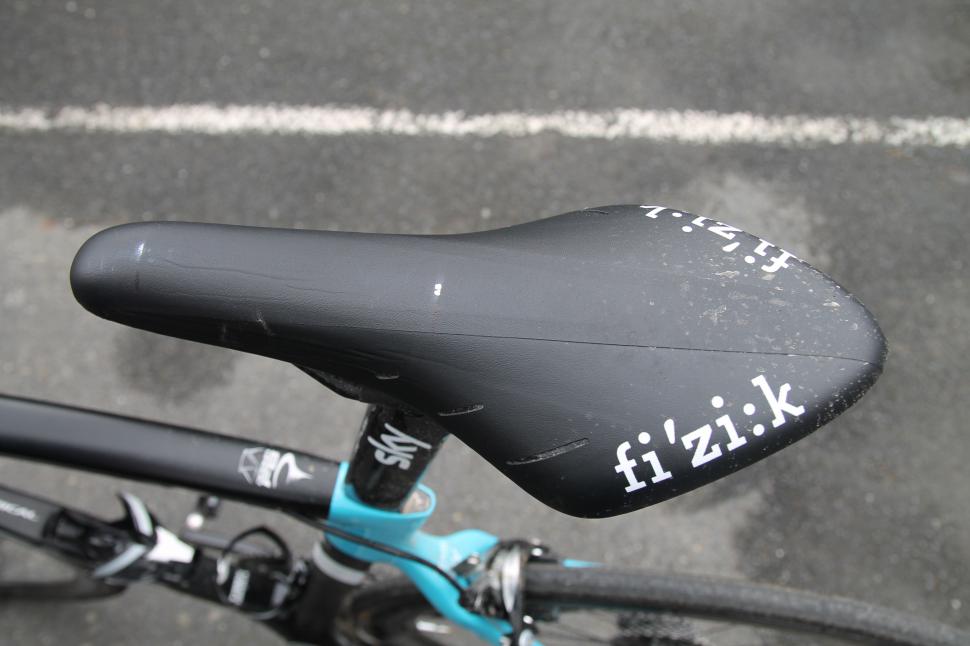 Those two white lines that you can just about see on the nose and the central part of the saddle are there to help the mechanics set the bike up correctly.

“There are so many different ways of measuring a bike,” Team Sky’s Head of Technical Operations and Commercial Carsten Jeppesen told us. “We have nine full-time mechanics and if they measured nine different ways it would be too risky for us, so we have made a way of doing things based on those two specific points. It is a way of making sure that all of a rider’s bikes are set up the same.” 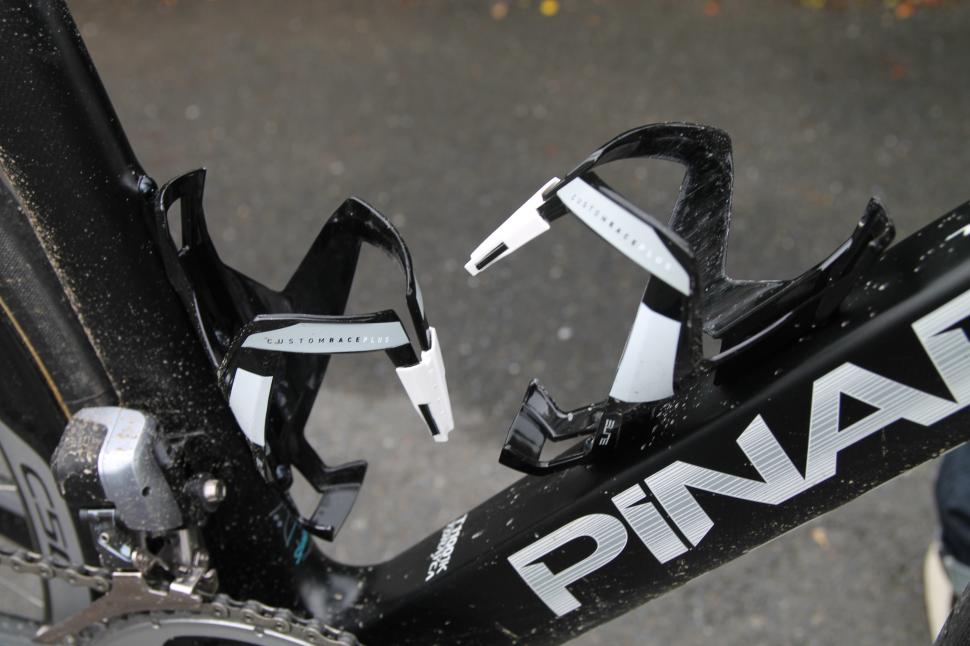 The bottle cages are Elite Custom Race Plus, reasonably lightweight at 40g each, although Elite does make much lighter cages such as the 15g (claimed) Leggero Carbon.

Speaking to Carsten Jeppesen and the Team Sky mechanics, Geraint Thomas is known to be one of the least fussy riders when it comes to bike setup. While other riders are ultra-particular about their setup and preferences, they reckon that G would climb aboard pretty much anything and get stuck in without complaint.