Currently sitting 9th in the general classification, Dan Martin has been having a really good Tour de France so far and showing extremely good form on the climbs. Here's a look at his Specialized Tarmac, his daily race bike bike, and the Shiv he'll use for the time trial today

Dan Martin hasn’t been able to shake the whole incident with a guy dressed as a panda bear chasing him up the final hill in Liege-Bastogne-Liege a couple of years ago and in fact, he’s actually embraced it. His Specialized Tarmac has been given a unique black and white paint job, which should make the climber a bit easier to spot in the peloton. 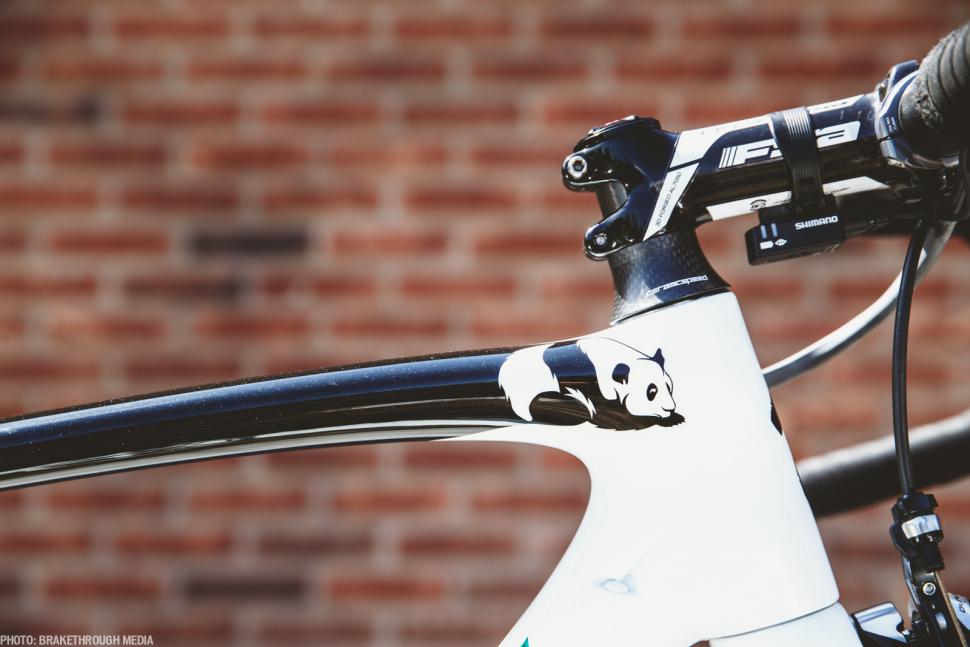 Martin has actually been riding this bike and its novel paint job since the L-B-L race earlier this year, but unless you’ve been paying very close attention to such races this year, you might well have missed it. 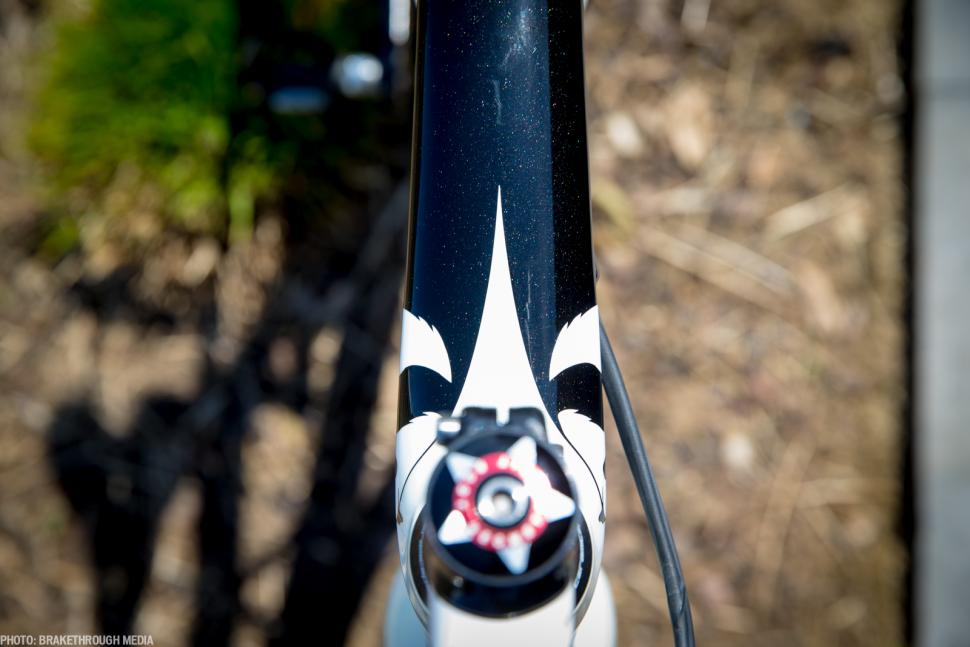 "The theme for the bike was a combination of the "Luck of the Irish" (a common phrase in the United States that means someone is in the right place at the right time) and his famous Liege-Bastogne-Liege Panda chase scene which happened in 2013,” said Ron Jones, Lead Road Designer at Specialized. 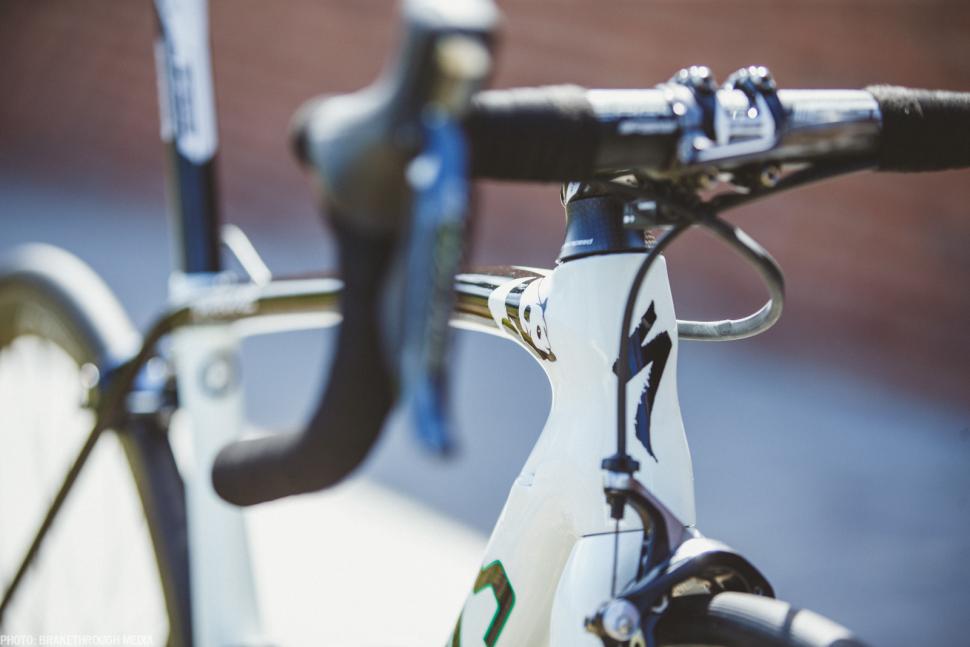 It is fair to say Martin has embraced the panda and he’s now supporting the organisation that uses the panda as its logo, the World Wide Fund for Nature (formerly World Wildlife Fund).

“We are so excited to have Daniel on board and supporting Team Panda. He is a fantastic motivation for our incredible super supporters who go the extra mile to fundraise for WWF - especially our cyclists in the upcoming Prudential RideLondon event, who are so inspired by Daniel’s success and wise words,” added Charlotte Bagg of WWF. 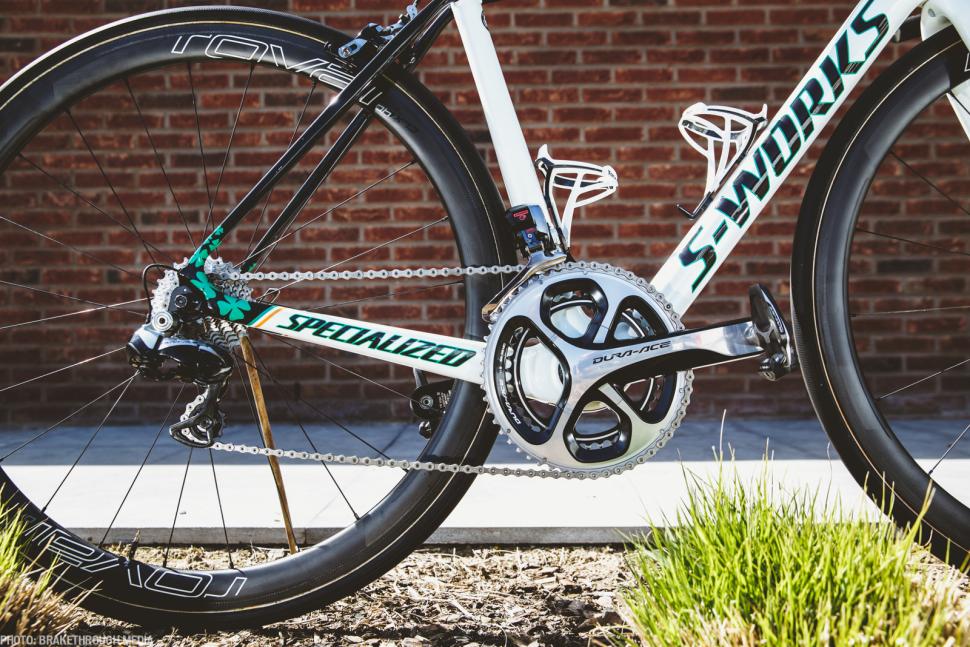 Alongside the panda graphics, the design also pays homage to Martin’s Irish routes, with a special green pearl top coat over the white base colour and shamrocks added to the dropouts. There are also the colours of the Ireland flag added as stripes in key places, a nod to his national championship victories. 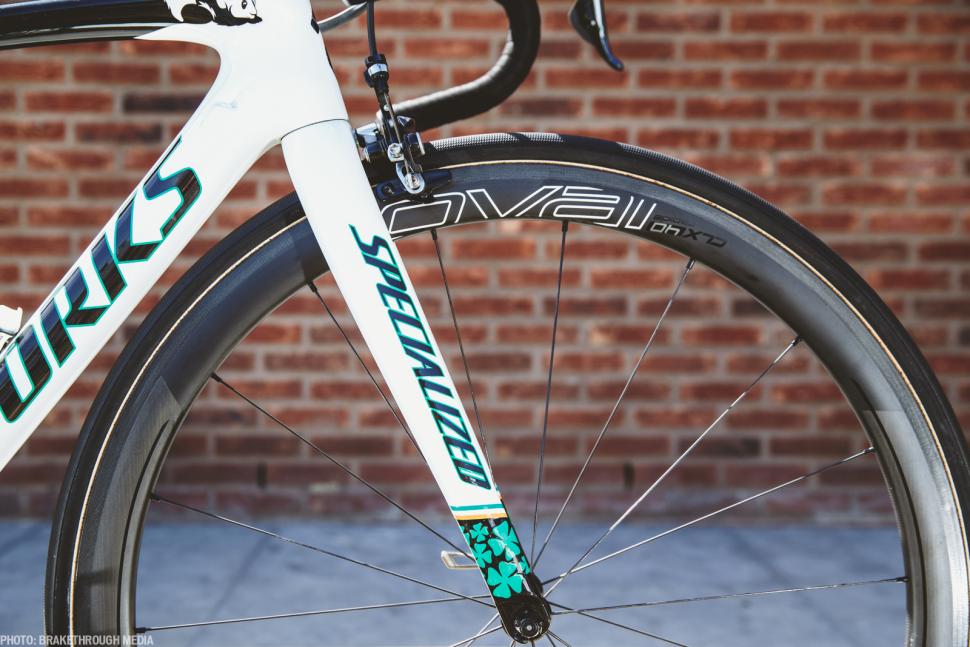 “I really like the design of the bike,” says Dan Martin. “It’s cool, the paint job is subtle but perfect. It reflects my commitment with WWF. The relationship with them started back in 2013 when I won the race and had a fan dressed as a panda bear chasing me up the final climb. “Now I am an ambassador for what is called Team Panda which is part of WWF UK. I help them raise money for their conservation efforts and it makes me truly proud. I was a bit surprised when I learned Specialized was making this bike. I am happy because it just brings me good memories. I am sure that during the entire race on Sunday I’ll be thinking of when I won. This time, it’ll be me chasing the Panda.” The bike is a Specialized Tarmac, the company’s all-round bike, with a full Shimano Dura Di2 drivetrain, Roval CLX40 wheels and FSA handlebars, stem and saddle.

There are two time trial stages in this year’s Tour, the 37.5km time trial that is today, and a 17km mountain time trial on stage 18. We know he’ll ride the longer time trial on this, the Specialized Shiv. For the shorter and hillier time trial it remains to be seen if he’ll use the Shiv or a Tarmac with extension bars - we saw some bikes equipped in this manner in the buildup to the race. 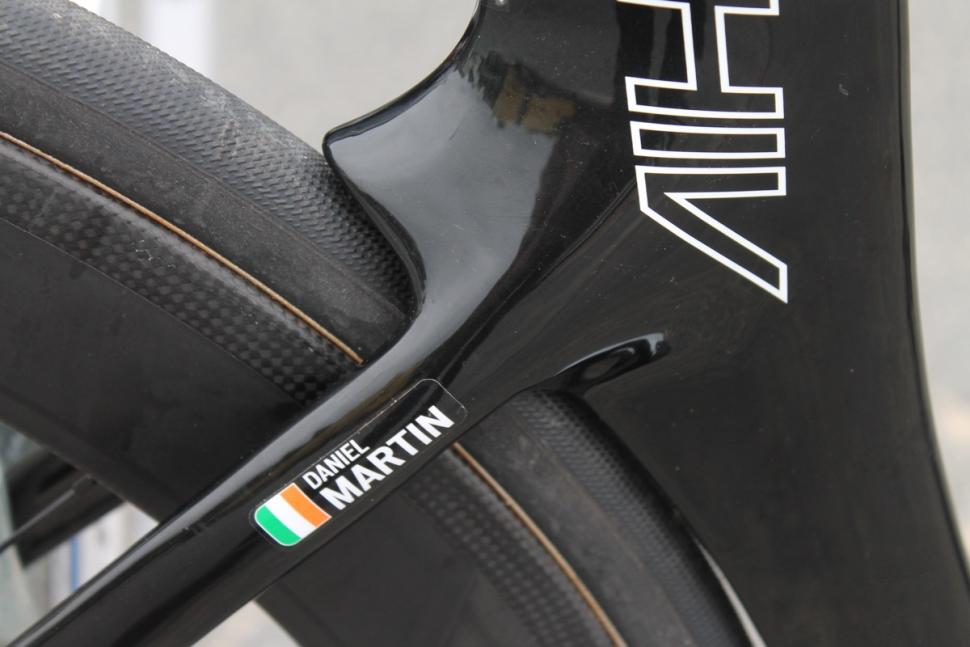 The Shiv has been in Specialized’s range since 2010, but despite its age still looks very modern. And fast. Like his Tarmac, the Shiv is fitted with a Shimano Dura-Ace Di2 groupset with Roval CLX 64 wheels. 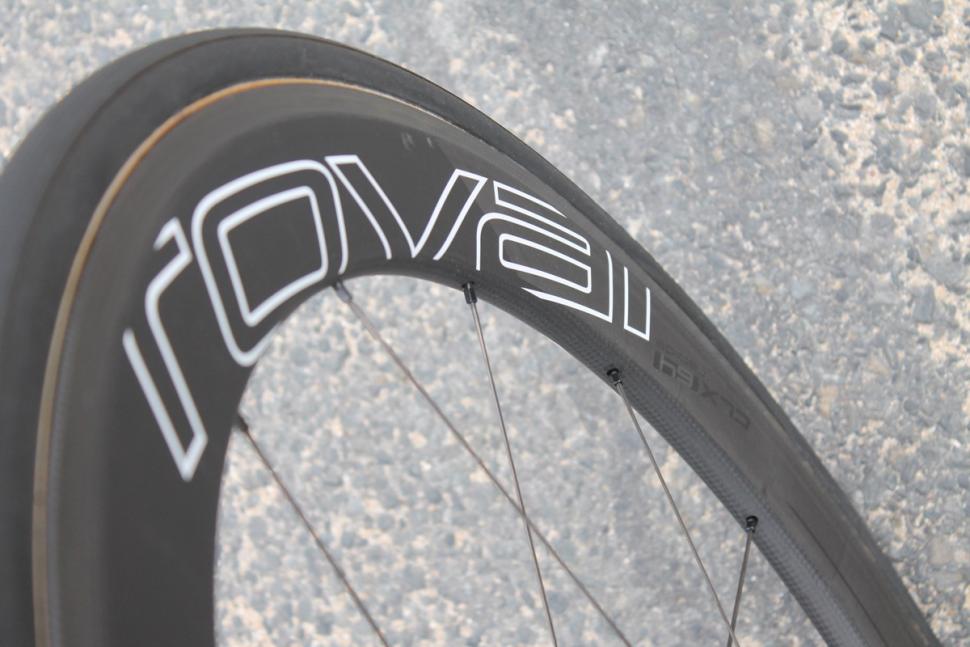 A key feature of the Shiv, and most modern time trial bikes these days, is the stem being integrated into the top tube, so it creates a smoother and lower profile front-end. That’s all about reducing frontal surface area, and decreasing the drag figure. the head tube is also extremely short, especially on this small size frame, so Martin can get very low at the front. 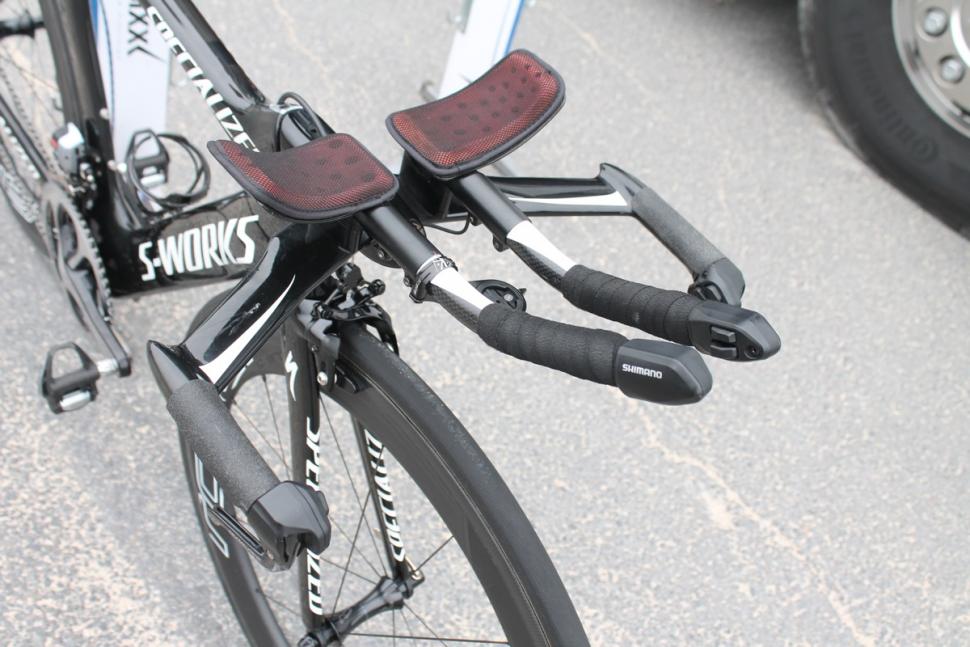 The carbon fibre extension bars have bar tape for extra grip and Shimano’s Di2 time trial shifter buttons, which are also replicated on the base bar, where grip tape is applied to increase purchase on the handlebars when braking and cornering. A K-Edge mount floats his Garmin computer between the extension bars so presumably he can keep an eye on his power output and average speed during a time trial stage. 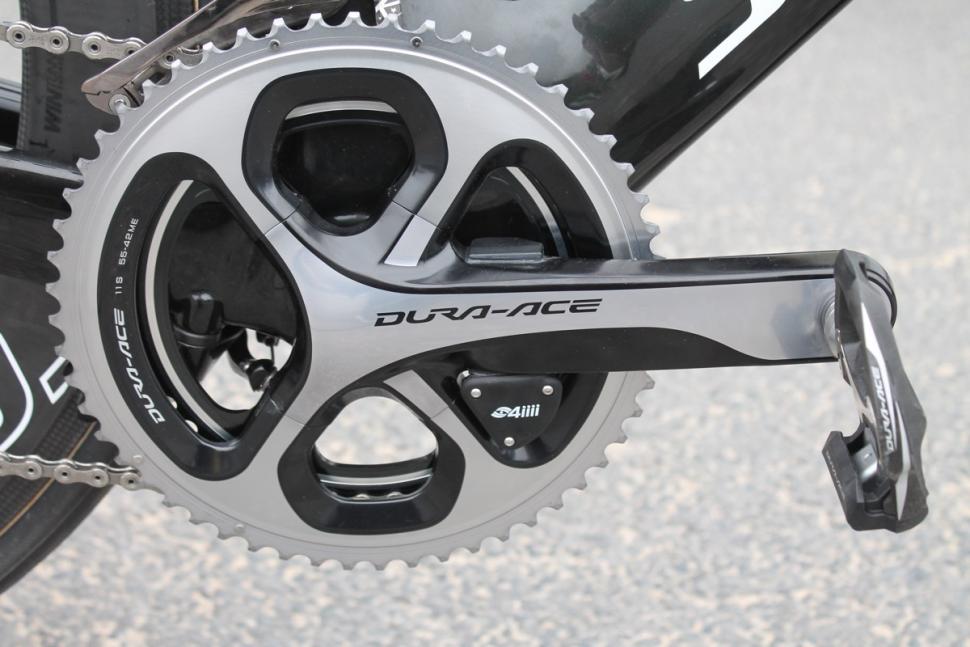 Etixx - Quick Step is using the new 4iiii crank-based power meter this season, and it fits onto a current Dura-Ace chainset. The chainrings are upsized to a 55/42 setup to allow higher speeds to be maintained, and spin on CeramicSpeed bottom bracket bearings. Fizik’s Tritone saddle has the nose cut off, so Martin can push his saddle as far forward as the UCI rules allow, in an effort to get as far forward over the bottom bracket as possible.

Specialized developed its own brakes for the Shiv, using a direct mount system with a centre-pull operation. The front brake is mounted in front of the fork but the rear brake is hidden away under the chainstays.