New Pinarello Dogma F8X Light saves 100g, but his bike can be no lighter than 6.8kg
by David Arthur @davearthur

Pinarello has revealed a lighter version of its Dogma F8 race bike for Chris Froome to do battle in the mountain stages of the Tour de France.

It’s called the Dogma F8X Light and according to the company’s claims, saves about 100g across the frame and fork. The frame, in a size 54cm, weighs a claimed 780g (compared to 860g for a regular F8) while the fork has dropped 20g down to 340g. Pinarello hasn't released a frame weight for the size 56cm that Chris Froome rides, but you can be certain it'll be a fair bit heavier. The new F8X Light retains the same silhouette as the regular F8 so the weight savings have come primarily from changes you can’t see, under the paint, with a fine-tuning of the carbon fibre layup.

Is there a downside to this new bike? Yes, it comes with a 69.8kg (154lb) rider weight limit. This does seem odd considering brands like Cervelo and Cannondale can produce frames that are lighter than this but carry no rider weight penalties.

Froome is safely inside the weight limit, and he has already been riding this new frame, first with a shakedown in the Criterium du Dauphine and then stage 8 of the Tour de France, which he won in emphatic style on the descent, not on the climb where the new bike might have provided an advantage. 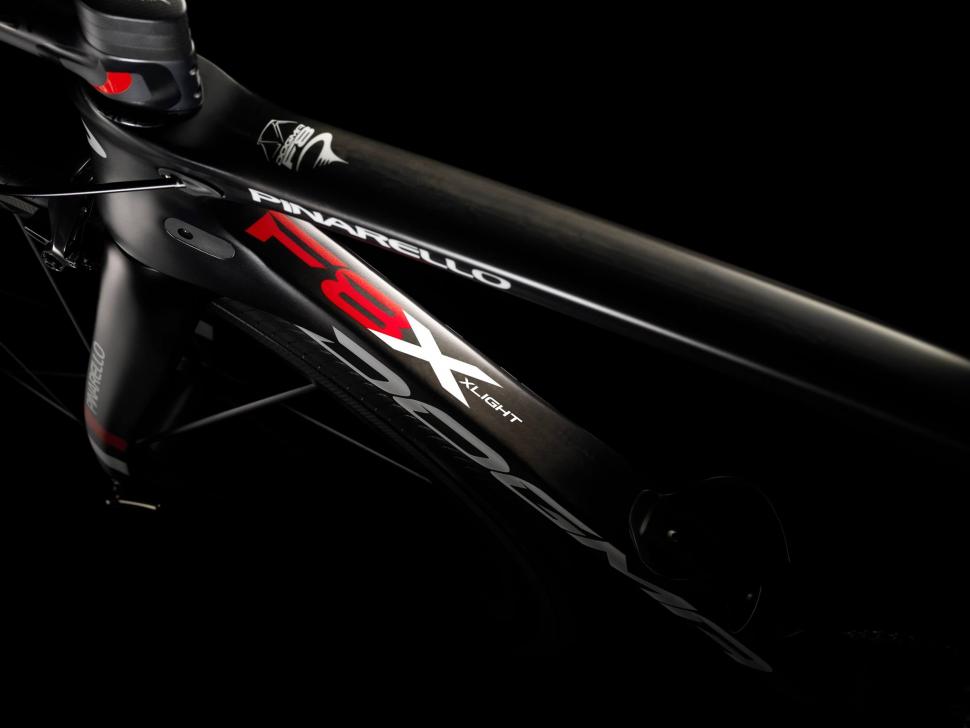 Pinarello will produce just 200 frames for the public in a choice of Team Sky colours, red and black. We don’t have a UK price yet, but in the US it will cost $8,499.

As impressive as Pinarello’s claims for its new lightweight Dogma F8 might be, they seem rather pointless when all bikes in the Tour de France peloton are restricted by the UCI’s 6.8kg minimum weight limit, a regulation that has been in place since the early 2000s. According to a Team Sky mechanic we spoke to, Chris Froome’s regular size 56cm Dogma F8 with Dura-Ace C50 wheels is bang on 6.8kg. With the shallower section C35 wheels, it’s a whisker under the weight limit. That’s with a Shimano Dura-Ace Di2 groupset, Stages power meter and PRO aluminium handlebars and stem.

You can bet a team as obsessed with marginal gains as Team Sky famously is would ensure Froome's racing bike is right on the 6.8kg limit, not a gramme over it, and that would count for the regular Dogma F8 as much as the new lighter F8X Light. They don't leave details like this to chance.

And already this Tour we’ve seen Froome mixing up his wheels. He started on the C50 wheels but then switched to a shallower section front wheel for the first mountain stage, and during the rest day training ride he appears to be riding some presumably prototype shallow section wheels from Shimano, pictured in the tweet above.

Given that Froome's size 56cm frame is going to be, at a rough guess, in the region of 30g heavier than the claimed weight for Pinarello's new frame in size 54, it might allow the mechanics can get closer to 6.8kg without going to such efforts to trim away the weight. Froome's current Dogma has some weight saving measures like the stripped back Di2 satellite shifter pod, so maybe the new frame will allow them to get closer to the weight limit more easily.

- Things you only see on pro race bikes

Still, with some lighter wheels fitted, the new bike is going to skirt pretty close to the weight limit. So will the mechanics have to add some weight to the bike to bring the weight back up? Without getting it on the scales and having a good poke around, we just don't know. Adding weight to a lighter frame seems a largely pointless exercise unless the bike was never close to 6.8kg in the first place?

So why would Pinarello be releasing a lighter bike for Chris Froome? Marketing, of course, the Tour de France being a huge shop window to promote products to a world audience.

Why have a weight limit at all? It’s a good question. The rule was introduced to prevent manufacturers pushing the limits when carbon fibre was in its infancy, to protect the racers from riding flimsy and potentially dangerous bikes, and also to provide a level playing field. That it chose 6.8kg was entirely arbitrary, and it does strike us as a bit strange that the rule hasn’t been regularly addressed as technology in cycling has clearly advanced massively since the rule was first introduced.

It’s very easy to buy a bike that flaunts the UCI’s weight limit. Without resorting to drilling holes in the cranks, you can (provided you’re rich enough) build a bike that weighs as little as 4.6kg in the case of Trek’s Emonda SLR 10, which uses a 690g frame. Merida will sell you the Scultura 9000 Ltd which tickles the scales to the tune of 4.55kg, while AX Lightness have shown a 4.4kg in the past. Focus will even sell you a road bike with disc brakes that is bang on 6.8kg.

- 5 of the lightest road bikes

So should the UCI update or scrap the weight limit? It’s regularly argued and debated and the UCI has made some noises that might suggest it’s prepared to take a closer look at the weight limit, but so far there has been no change.

What do you think? Is it good for the industry or stifling innovation? Do you think the UCI should relax this ruling so we can see just how light some of the Tour de France bikes could be, or would it hand an unfair advantage to the better-funded teams that can afford to have light components and bikes specially developed?