Britain’s Adam Yates is currently sitting in second place in the Tour de France and wearing the white jersey as best-placed rider age under 26 despite an altercation with the flamme rouge 1km to go marker on Friday. Here’s the Scott Addict he’s riding. 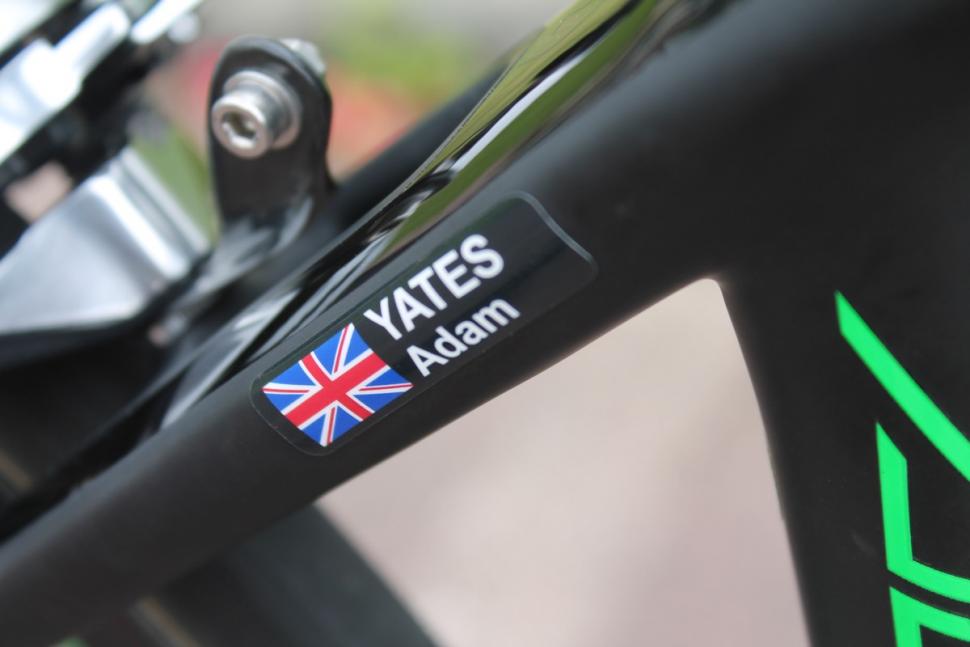 Orica-BikeExchange riders choose between the Scott Foil and the Scott Addict for road stages, the Foil being the more aero option and the Addict being the lighter weight choice. Scott claims that the Addict’s frame comes in at 790g while the fork is 300g. 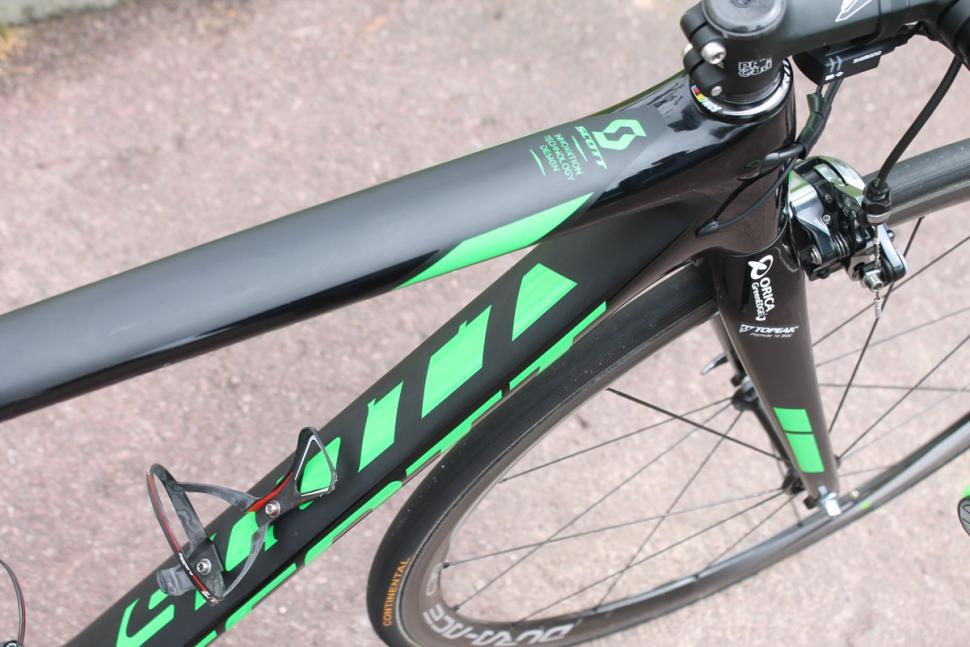 The Addict is made from what Scott calls HMX-SL carbon-fibre. This incorporates T1000G carbon and uses a ‘carbon nanotube reinforced epoxy resin”.

The nanotubes in the resin are intended to “offer an improved strength perpendicular and at off-axis to fibre direction, which allows for a better inter-laminar shear strength.” 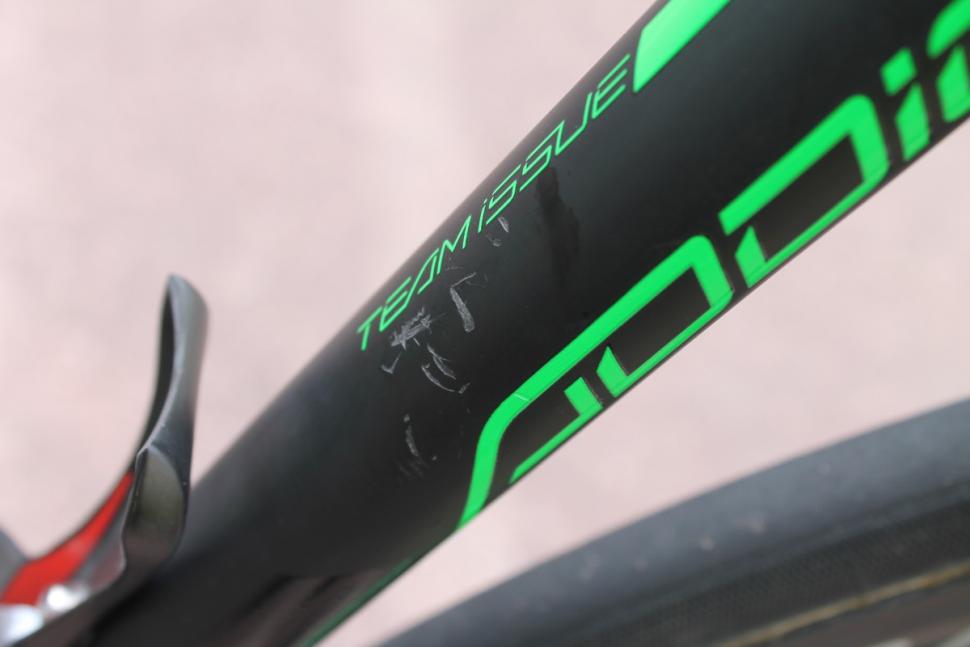 Like most high-end race bikes, the Addict comes with a tapered head tube designed to provide front-end stiffness. Although the upper headset bearing is 1 1/4in, the head tube flares out to take a 1 1/4in lower bearing. The bottom bracket is oversized too.

Scott says it has a proprietary process, called IMP, that allows it to increase strength by using high modulus stressed fibre in more precise placement in critical areas. Orica-BikeExchange is a Shimano sponsored team and Adam Yates’ bike is built up with a Dura-Ace Di2 (electronic) groupset. The chainset incorporates an SRM power meter and 54/42-tooth chainrings, although these pictures were taken before the flattish stage one, not before a mountain stage. Yates, 1.73m (5ft 8in) tall, uses 170mm cranks. 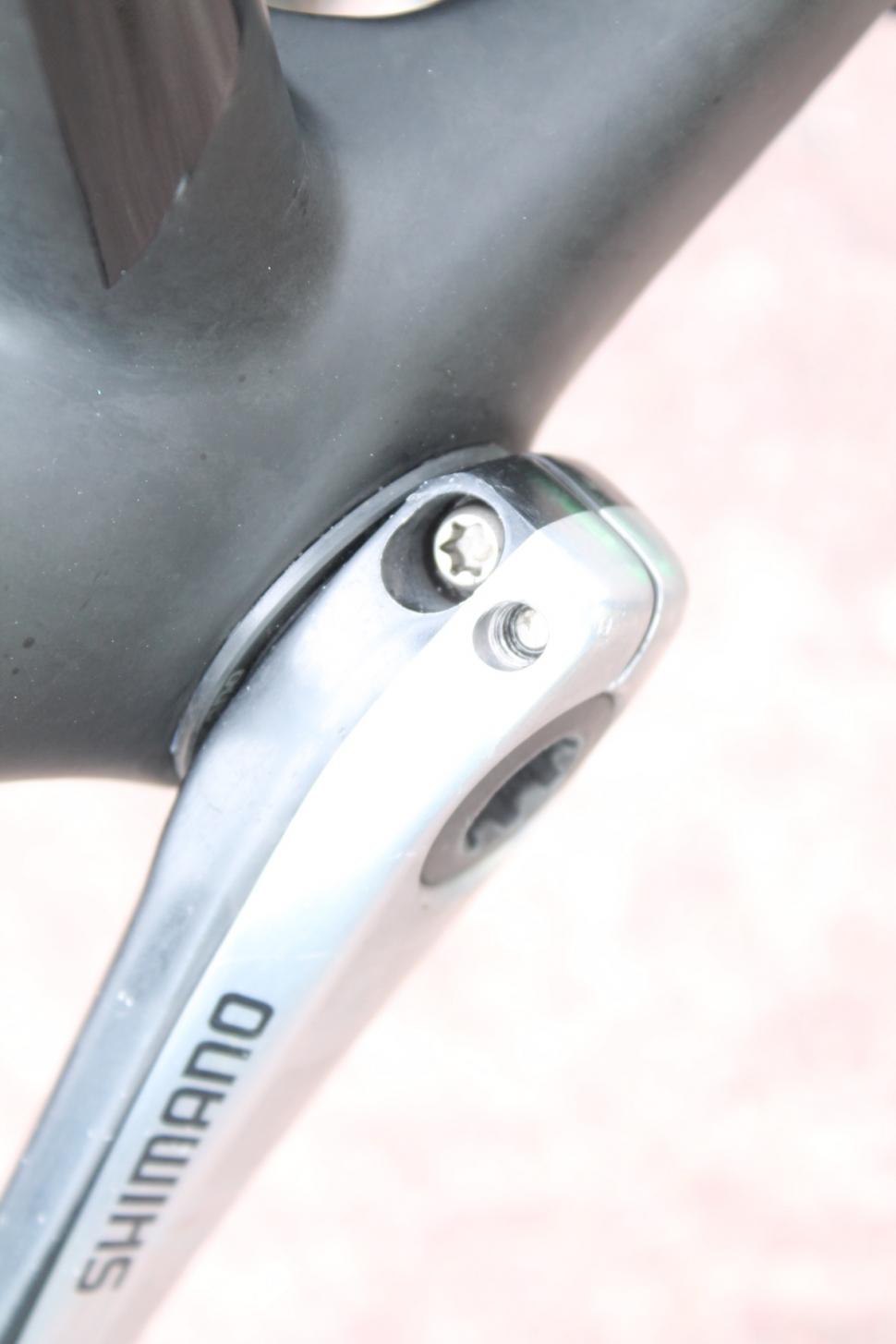 The Orica-BikeExchange mechanics have swapped the standard hex bolts in the crank arm for Torx bolts. 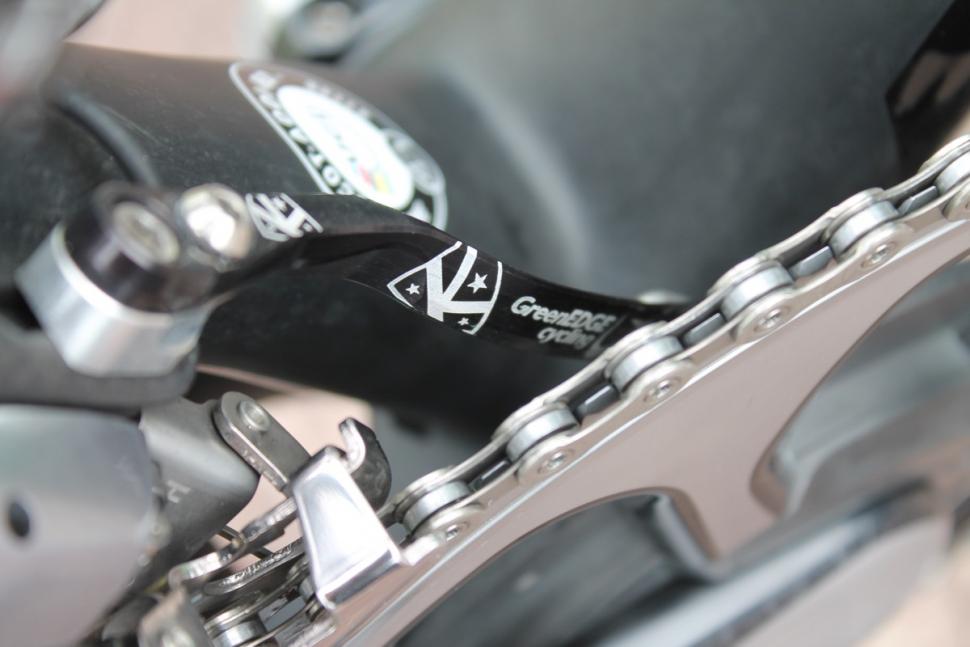 That's one clean chain, huh? It’s useful to have pro team mechanics sorting out your bike after every ride. 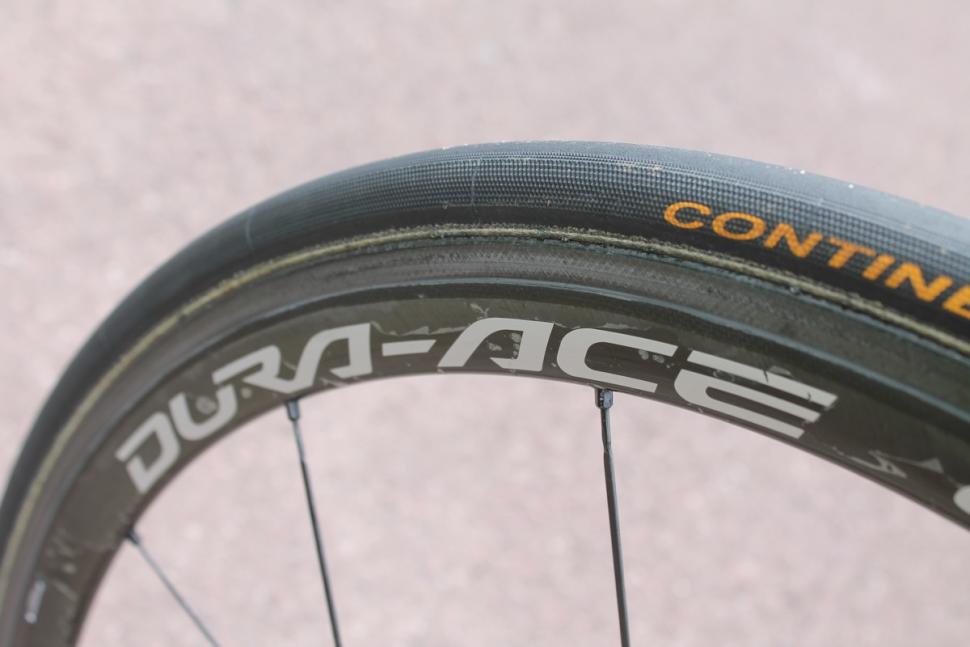 This bike is fitted with Shimano Dura-Ace C35 wheels with decals that are in danger of flaking off. That could be the downside of all that pressure washing to which team equipment is subject.

The tyres are Continental Competition Pro Ltd in a 22mm width. That’s a really unusual size for pros these days. The vast majority of tyres we saw while visiting each of the Tour de France teams were 25mm wide. 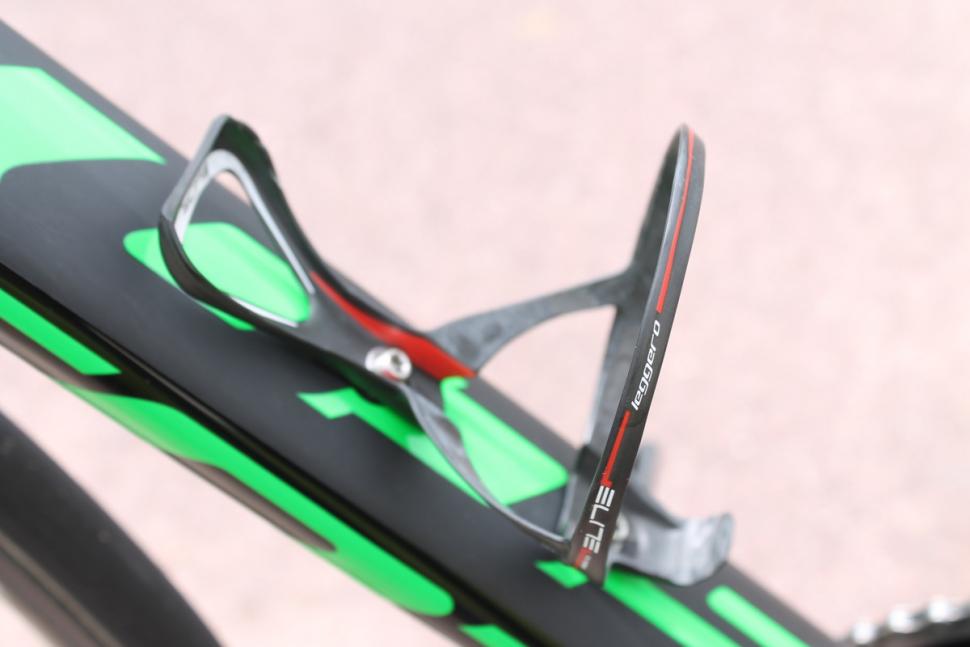 The Elite Leggero bottle cage weighs a claimed 15g, which is ridiculously light. A lot of other pros, including Chris Froome, use the same design.

The handlebar and stem are aluminium options from Shimano’s sub-brand Pro.

Yates has his Di2 satellite shifter unusually positioned pointing forward. He’s not unique in doing this but most riders have them orientated backwards so that they can be operated with the thumb rather than the index finger. 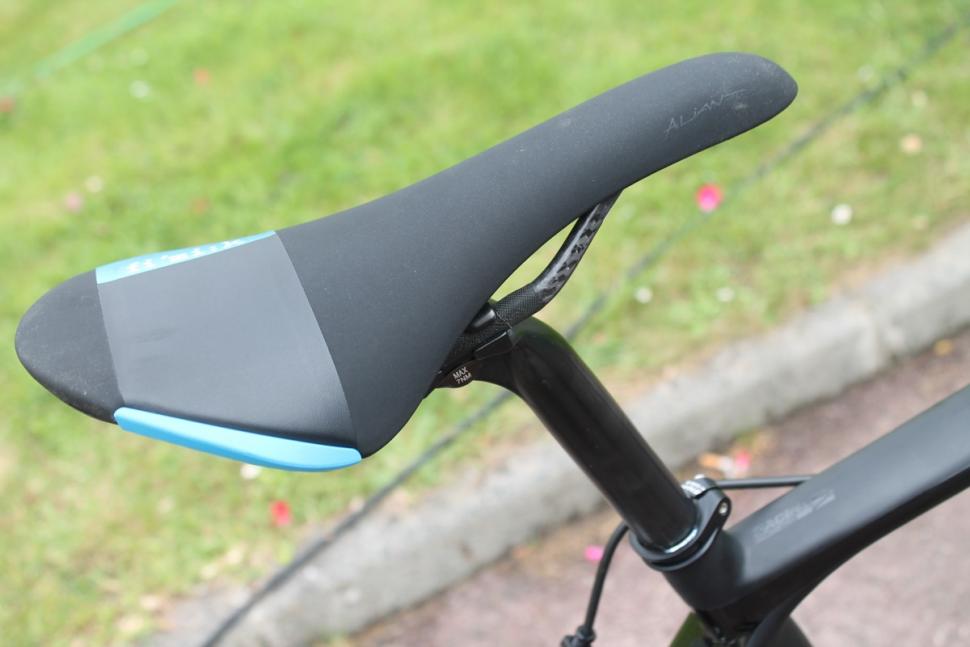 This version of Fizik’s Aliante saddle has carbon braided rails.