Is Shimano aiming to make its next generation Dura-Ace mechanical groupset the lightest it’s ever been? And will it unveil a carbon fibre chainset?

Rumours of a new version of Shimano’s flagship Dura-Ace groupset were confirmed earlier this year when photos were leaked on the internet. The photos didn’t tell us much, other than to confirm that it appears the company is sticking with an 11-speed drivetrain, and not going up to 12.

Now we’ve unearthed a video - which has just been taken down, not before we managed to get screengrabs below - that provides a bit more information on the new groupset, but we’ve yet to get any concrete details out of Shimano yet. From the video, it’s clear Shimano has radically redesigned the rear mech, with a much more angular design reminiscent of one of its mountain bike rear mechs.

Shimano also appears to have taken the Shadow technology from one of its mountain bike rear mechs, which has different cable routeing and a more compact profile than the previous version so it sticks out from the frame less than the old version. It appears to have made the main body much smaller too, which suggests to us that Shimano might be aiming to make the groupset lighter, to ensure mechanical is still relevant in this era of electronic groupsets. 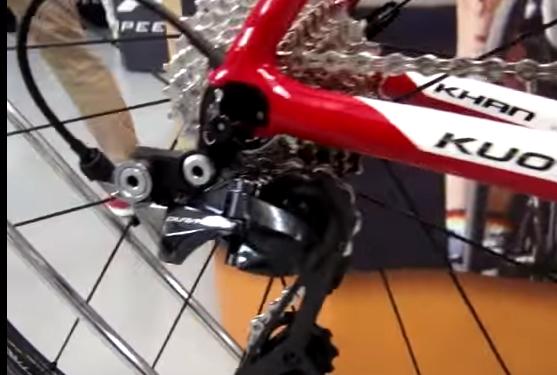 The new chainset is a big departure from the previous Dura-Ace crank, too. It has massive crank arms, and could it be made from carbon fibre? It’s tricky to tell from the video, it’s not the best quality. We can tell that Shimano has stuck to a four-arm spider.

Shimano has traditionally veered away from using carbon because its own testing showed that while carbon might provide lower weight, it’s not as rigid as aluminium. That didn’t stop the company releasing, for a very short time, a carbon fibre Dura-Ace chainset way back in 2007. It used an aluminium core with a carbon fibre shell and weighed 709g. The switch to plastic would account for the huge increase in size compared to a current Dura-Ace crankset.

And has Shimano updated the brake callipers as well? These appear to be direct mount, and previously when Shimano has released a new Dura-Ace groupset the brakes have offered a big leap in braking performance.

Direct mount is relatively new, it’s only been around for a few years, so it could be Shimano has found some way to improve them. Though Dura-Ace is a race groupset, it might have increased the tyre clearance in a nod to the growing trend for wider tyres.

That's about all we can tell you at this stage, and we might be completely wrong about all our assumptions. We should hopefully find out soon.