Canyon is releasing a range of lightweight Endurace CF SLX endurance bikes that are intended to offer plenty of comfort along with responsiveness and control. Unlike the existing Endurace models, the new ones come with disc brakes and the frame is built with aerodynamics in mind.

Check out our First Ride on the Canyon CF SLX 9.0 SL.

The Endurace CF SLX is very different from the first Endurace bikes that Canyon introduced a couple of years ago although the Sport geometry is similar.

The idea, as usual with endurance bikes, is to provide a more relaxed riding position than you’ll find on a standard road bike to reduce the strain on your back and shoulders. 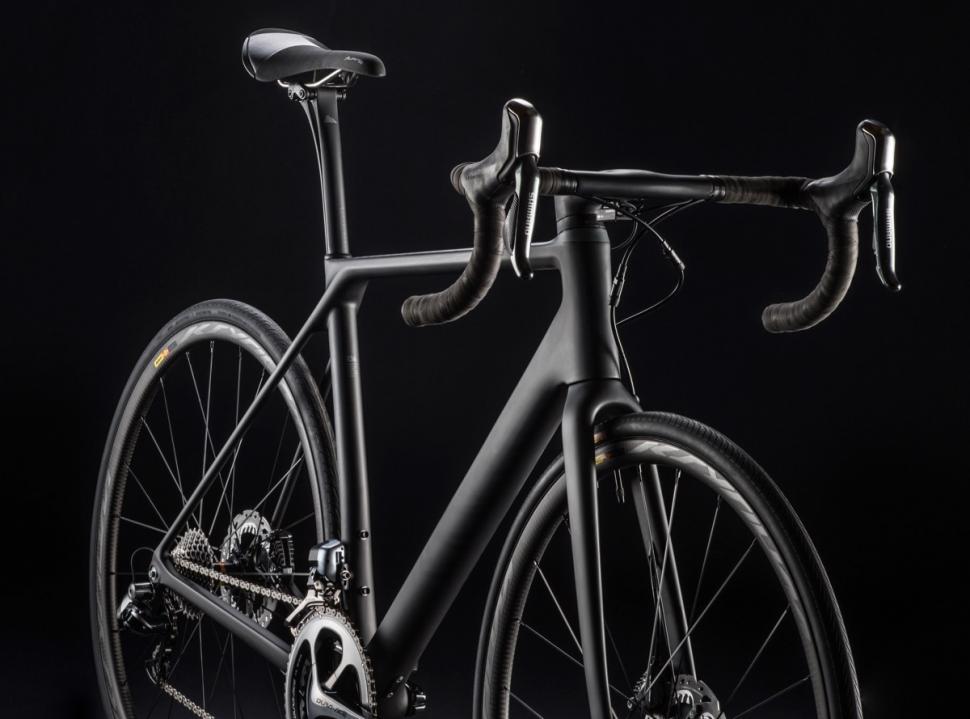 The head tube on the medium sized model, for example, is 158mm, with a 553mm top tube and a 522mm seat tube. That might not sound especially tall but those figures don’t tell the whole story because Canyon has added more height to the fork. The idea of adding height there rather than to the head tube is to keep the bike looking sporty rather than, you know, gate-like.

The stack height (the vertical distance from the centre of the bottom bracket to the top of the head tube) is 578mm – 11mm taller than that of the equivalently sized Ultimate CF SLX race bike – and the reach (the horizontal distance between those points) is 382mm – 9mm shorter than that of the Ultimate. Those figures give a stack/reach of 1.51. Read our review of the Canyon Ultimate CF SLX 9.0 here.

As on the existing Endurace CF, the chainstays are 415mm, 5mm more than on the Ultimate CF SLX. The idea is to increase stability at speed. Canyon has increased the fork rake on this bike by 2.5mm to reduce the trail (the distance from the centre of the contact point of the front wheel with the road to point where the steering axis intersects the road surface) to add some more responsiveness back into the steering.

The Endurace CF SLX is fitted with Canyon’s S15 VCLS 2.0 CF seatpost that’s designed to flex and take the sting out of harsh roads. The post is split into two halves that can move independently, a Flip Head ensuring the saddle stays horizontal. The post allows between 13mm and 25mm of setback. 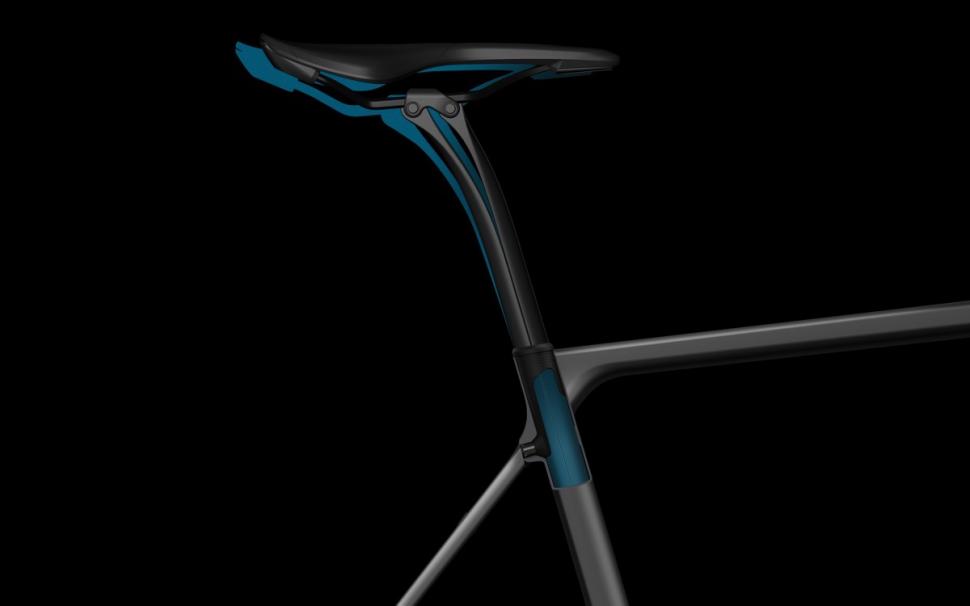 “The… setback inevitably positions the rider further behind the bottom bracket, which is not optimal for transferring power,” says Canyon. “To overcome this, we engineered a kink halfway up the seat tube that allows us to shorten the top tube length while maintaining the optimal seat tube angle. That way, riders get all the comfort benefits of our S15 seatpost while remaining positioned above the bottom bracket for efficient pedalling dynamics and the ideal reach for effortless handling.” 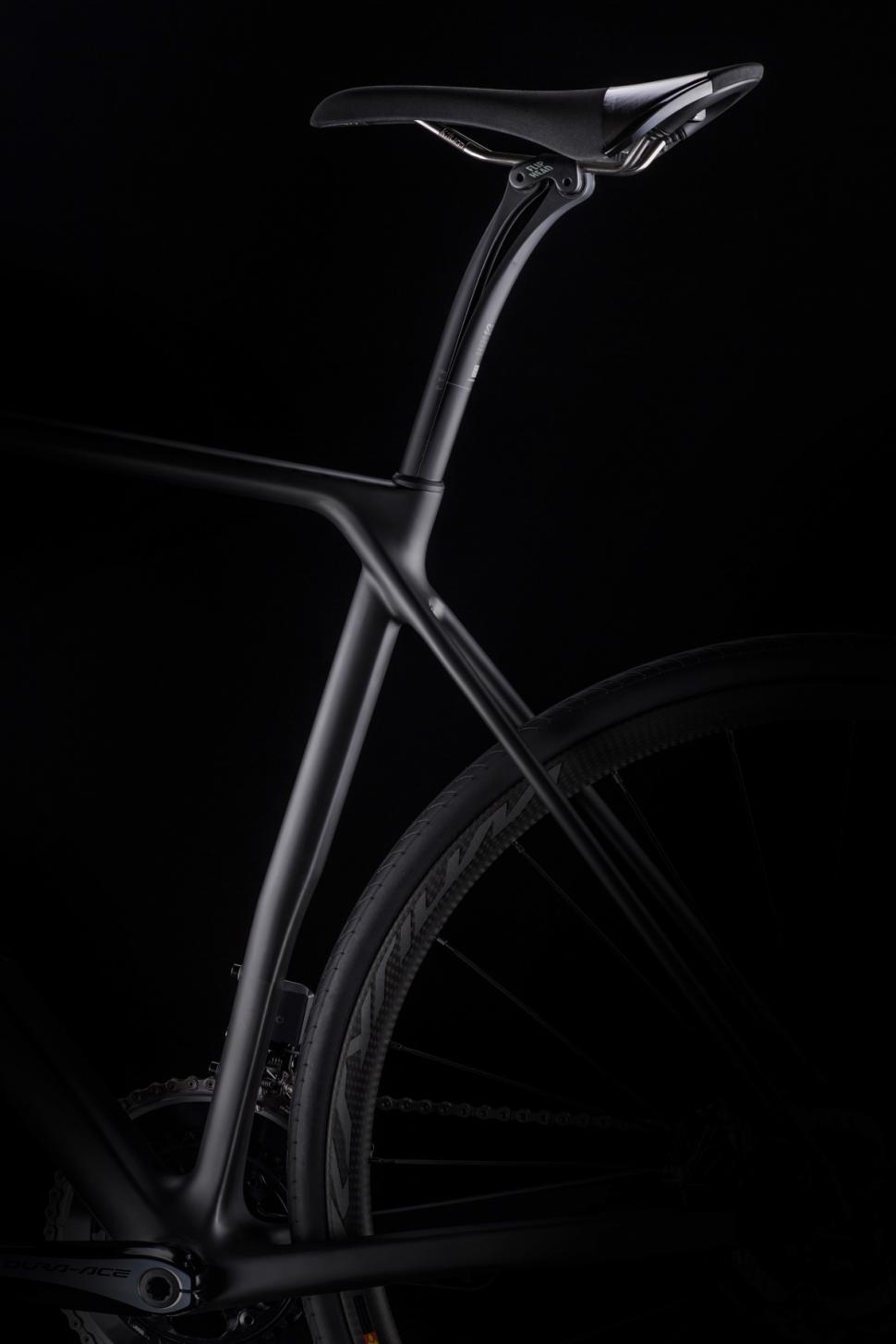 “If you measure the vertical deflection at the saddle, an indication of the comfort of a bike, the Endurace CF SLX will definitely break all records,” says Canyon engineer Michael Adomeit.

Canyon has taken the H11 Aerocockpit – integrated carbon stem and handlebar – from the Aeroad CF SLX aero road bike and developed the H31 Ergocockpit for the Endurace CF SLX. Stat fans will be pleased to know that it’s said to be 10% more vertically compliant and 24g lighter. 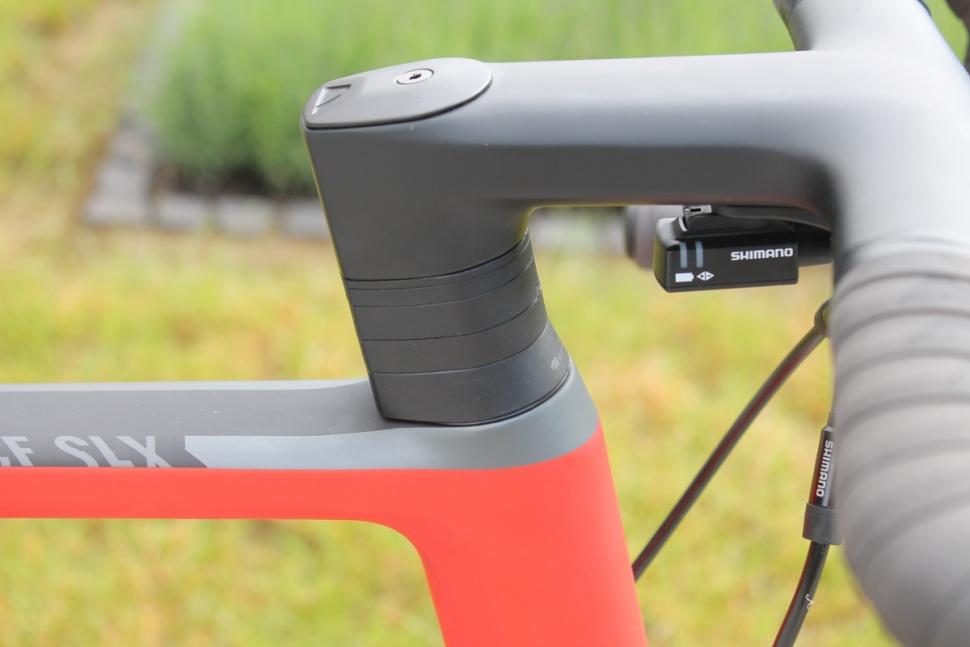 It’s quite a compact bar with the profile of the tops designed to be both aero and comfortable with a large taping surface. The 6° backsweep from the centre is intended to reduce pressure on your wrists. 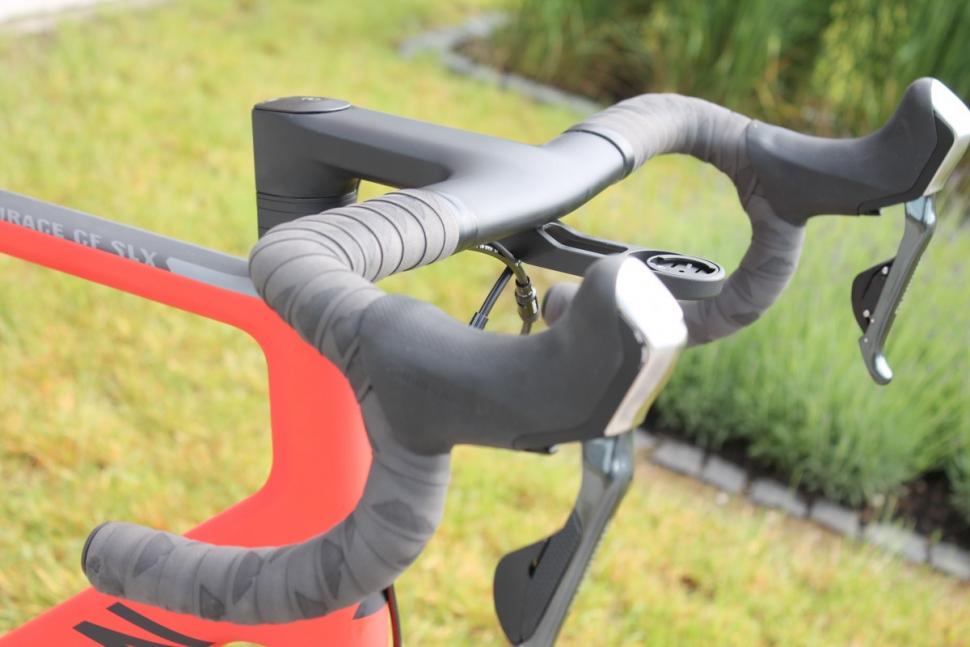 “Conventionally, a gap is required [at the back of the stem] to tighten the stem onto the fork shaft [but] this compromises the carbon structure and also applies uneven clamping force onto the shaft,” says Canyon. 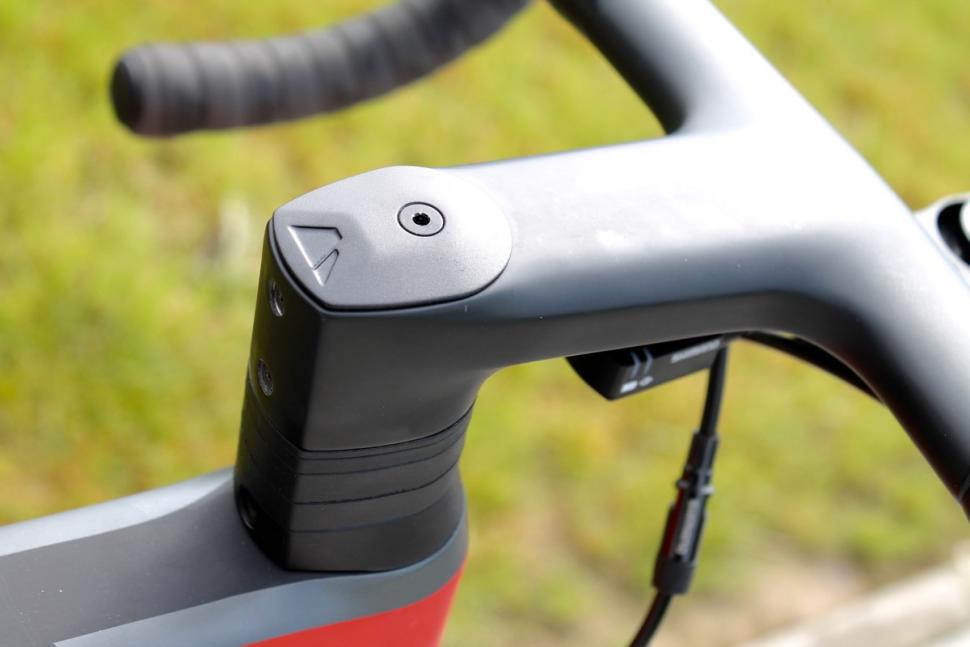 “[Here], the stem is pressed onto the shaft via two screws and a transition plate. This results in a more balanced distribution of force around the shaft, which is not only better for the carbon, but safer for the rider and provides a more solid interface between the two components for extra torsional stiffness.”

All of the Endurace CF SLX’s comfort features are intentionally subtle looking. Canyon want this to have the appearance of a race bike.

All of the Endurace CF SLX models are equipped with flat mount hydraulic disc brakes: Shimano BR-RS785 across the board. Here’s our review of Shimano’s brakes.

Canyon uses 12mm thru axles (12 x 100mm front, 12 x 142mm rear), which is becoming the dominant spec for disc-equipped road bikes. The bikes are equipped with the DT Swiss RWS (Ratchet Wheelmounting System) skewers which have a lever that you just rotate until it’s tight. You can then adjust the position of the lever or even remove it altogether and put it in your pocket. The rotors are 160mm front and rear on all except the smallest frame size (Canyon uses 140mm rotors for the 2XS) because Canyon thinks this is the safest option. Shimano, on the other hand, believes that 140mm rotors are enough, but on a first generation carbon bike that will be used globally in all kinds of different conditions, Canyon is erring on the side of caution.

The use of discs means that the carbon layup on the left fork leg has to be reinforced to handle the braking load. Despite that, the full fork weighs in at a claimed 325g. 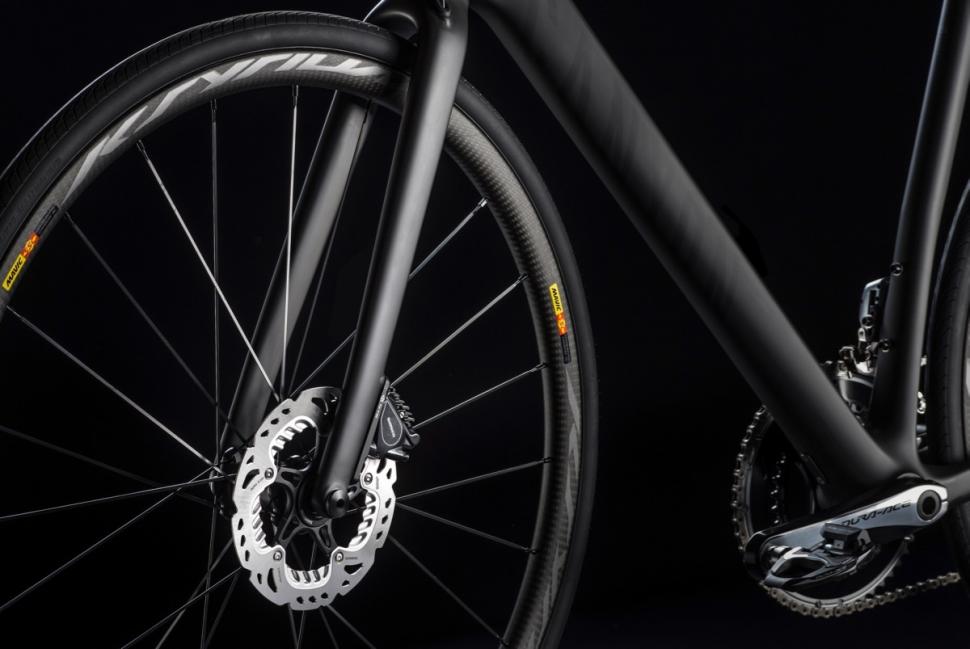 Canyon has used high TG resin to bind the fibres of both the left fork leg and the left rear triangle to cope with the temperatures associated with disc brakes (you can think of the Tg as the resin’s melting point).

“A resin will start to degenerate at a certain temperature,” says Michael Adomeit. “Normal resin that’s used in carbon frames has a TG where it starts to degenerate at 120°C. With this one the TG is 180°C.”

Stainless steel threads are also used on the fork because the conductivity is much less than with aluminium. All of the Endurace CF SLX models come with 28mm tyres for extra vibration damping and grip. If you want something larger, both the frame and the fork can take tyres up to 33mm wide. 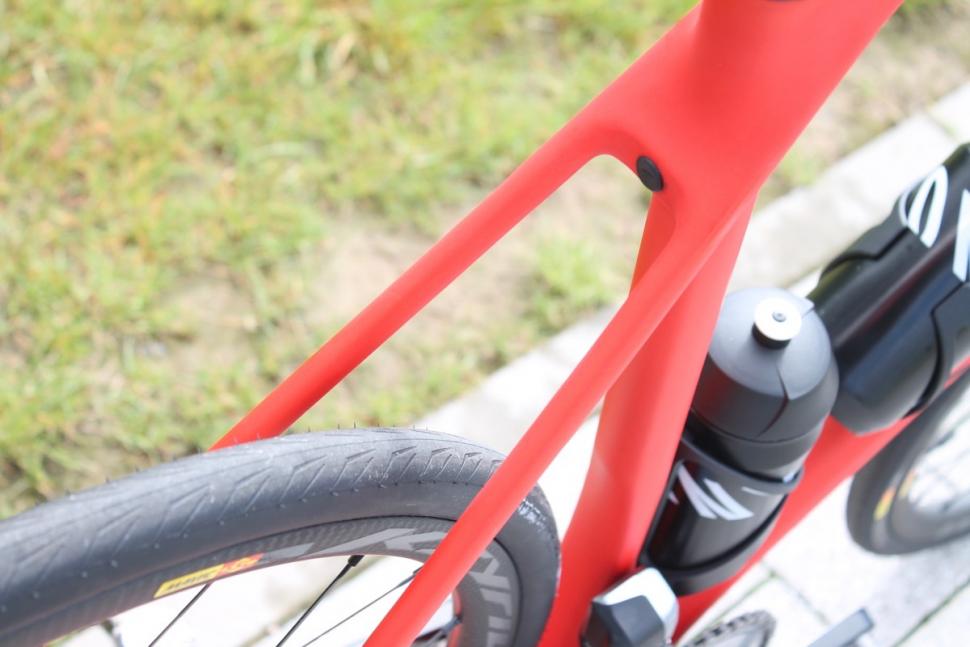 Canyon has concentrated on aerodynamics in the design of the Endurace CF SLX, which is an unusual focus for an endurance bike, especially one equipped with disc brakes.

“The desire for more speed while exerting less effort is universal; all riders can benefit from a bike optimised for aerodynamic performance, not just competitive cyclists,” says Canyon. “Taking our findings from developing the latest generation Ultimate CF SLX and backing these up with additional wind tunnel tests, we were able to greatly enhance aerodynamic efficiency with the Endurace CF SLX.”

In order to do this, Canyon has developed a mobile carbon-fibre leg dummy – named Ferdi – for use in the wind tunnel. 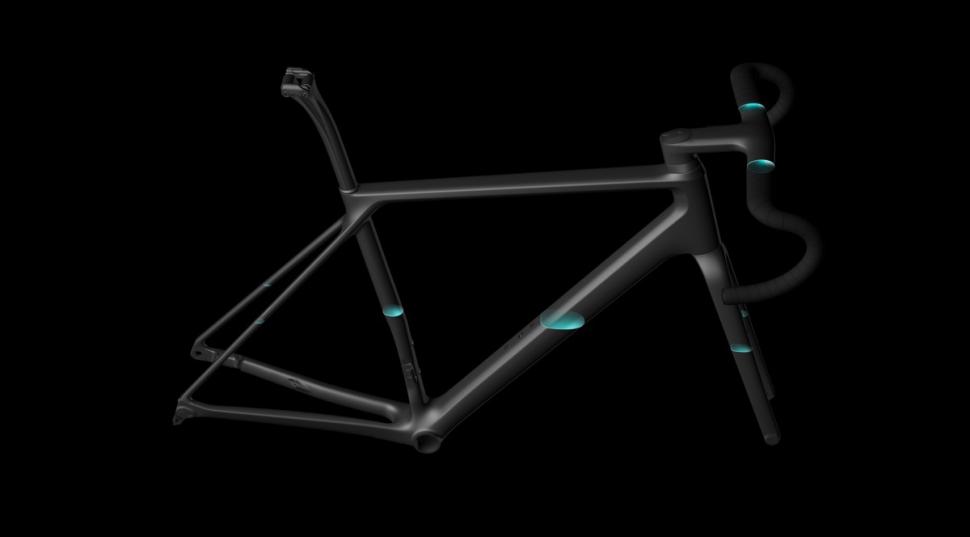 “When tested back to back in the wind tunnel, only 3.3 W separated our Ultimate CF SLX Disc Prototype (219.4 W) from the standard Ultimate CF SLX (216.1 W) at 45 km/h,” says Canyon. “The difference stems from the disc brakes themselves, yet more importantly from disc-specific wheelsets that require triple-laced spokes and larger hub bodies to accommodate through axles.

Canyon claims these statistics for the Canyon CF SLX:

The Canyon Endurace CF SLX is available in six different builds starting with the €3,599 8.0. This one comes with a Shimano Ultegra (mechanical) groupset, and DT Swiss RR21 Dicut DB wheels. It’s the same price again for the 9.0 with a Shimano Dura-Ace (mechanical, above) build.

The most expensive model in the range is the Endurace CF SLX 9.0 SL (below) at €6,299. This one has the same Dura-Ace Di2 groupset but with Mavic Ksyrium Pro Carbon SL Disc Clincher WTS wheels. Check out our First Ride on the Canyon Endurace CF SLX 9.0 SL.