Focus pulled the wraps off its brand new Cannondale Synapse and Giant Defy competitor at a launch event in Berlin last week, the Paralane.

The endurance category - road bikes designed with an emphasis on ride comfort and smoothness - has become one of the fastest growing in road cycling ever since Specialized unveiled the Roubaix, the first bike aimed at sportive cyclists, in 2003.

They are bikes popular with cyclists that want the performance and speed of a race bike but are unlikely to ever pin a number to their jersey, and instead value the comfort provided by the relaxed geometry, and the smoother ride offered by wider tyres and specially shaped frame sections.

The Paralane represents the German company’s interest in this demographic and to ensure it’s a credible alternative to its many rivals, Focus has developed a brand new bike packed with many of the very latest features that are increasingly common on endurance bikes, as well as pulling all its carbon and disc brake expertise into a range of bikes priced from £1,399 up to £4,799. 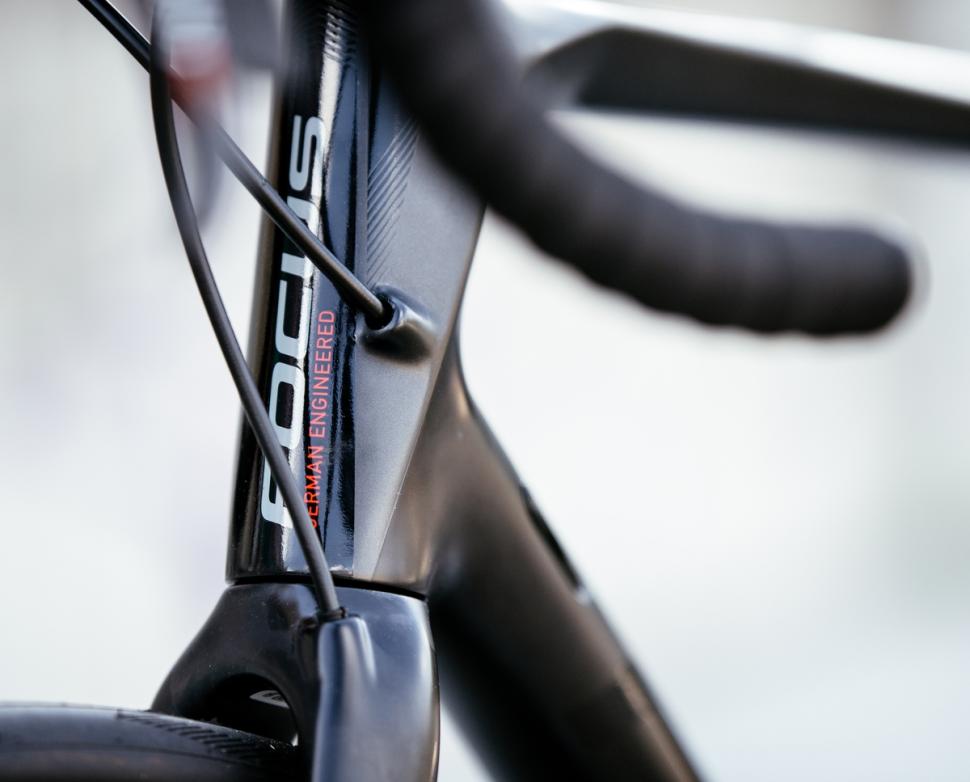 Focus has always been a company with a keen interest in racing. Founded by world champion cyclocross racer Mike Kluge (and still very fast on two wheels), sponsorship of a professional team (AG2r) and the launch last summer of the Izalco Max Disc, one of the few race bikes with disc brakes available, it’s clear this is a company with racing in its DNA.

While Focus has previously catered for the sportive cyclist with the Izalco Ergoride, a version of its Izalco race bike with a taller head tube, the new Paralane represents a clean sheet design that is intended to meet a brief that includes being able to tackle both smooth and rough roads, cobbles and even gravel, as is the growing appetite from cyclists wanting to mix up their otherwise predominantly road-based rides with diversions into the unknown. And gravel? Focus doesn't go out of its way to call it a gravel bike, but as we would find out on the first ride, it can certainly handle a bit of the loose stuff.

Boxes are thoroughly ticked with the new Paralane. It’s a disc-specific frame and fork using the Flat Mount standard, with space for up to 35mm tyres, mudguard mounts and 12mm thru-axles at both ends, using the company’s super simple RAT (Rapid Axle Technology). The Paralane is available in both carbon fibre and aluminium versions, with the former weighing a claimed 907g for a size 54cm frame, while the latter boasts additional rack mounts. All cables are internally routed. 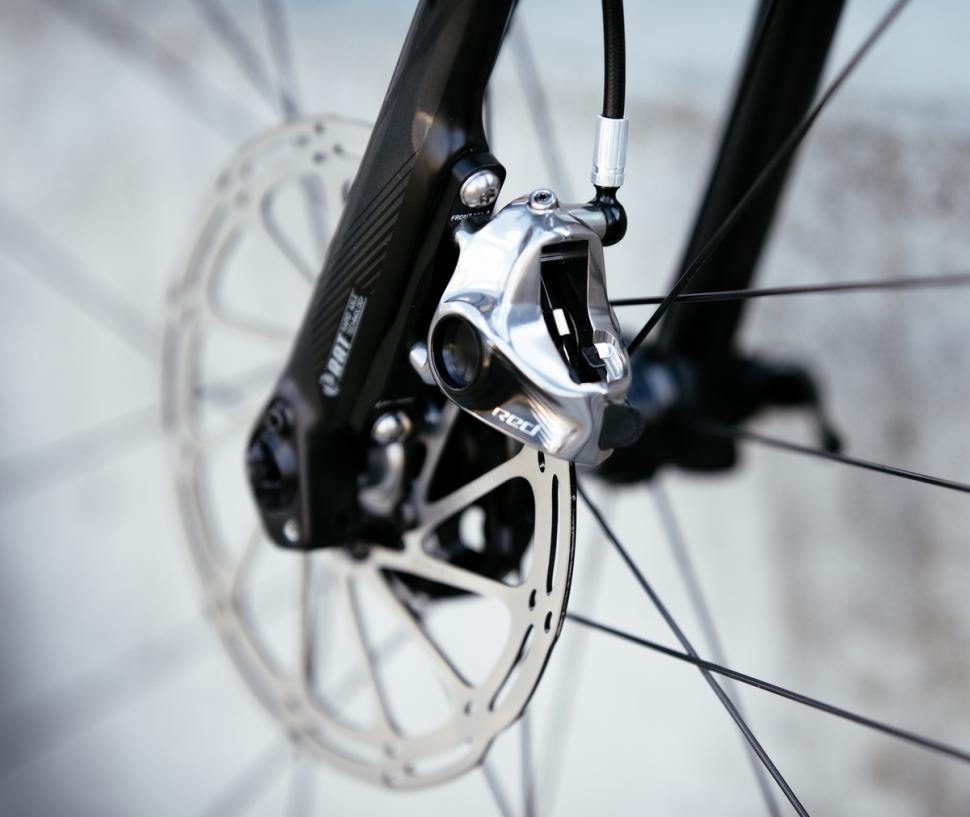 Like the Giant Defy, it’s disc brakes or nothing. Focus says it wasn’t possible to make a caliper version and still maintain the frame design that has been produced to provide as much comfort as possible, and also offer space for 35mm tyres. Add mudguards and there’s still space for 32mm tyres while out of the box, the Paralane comes with 28mm tyres fitted.

There’s little surprise that the new bike incorporates technology seen on other Focus models. Like last year’s Izalco Max, the Paralane has RAT (Rapid Axle Technology) thru-axles and uses the Flat Mount standard. The thru-axle system has been refined with a 43g weight saving and easier adjustment with a new retaining nut. 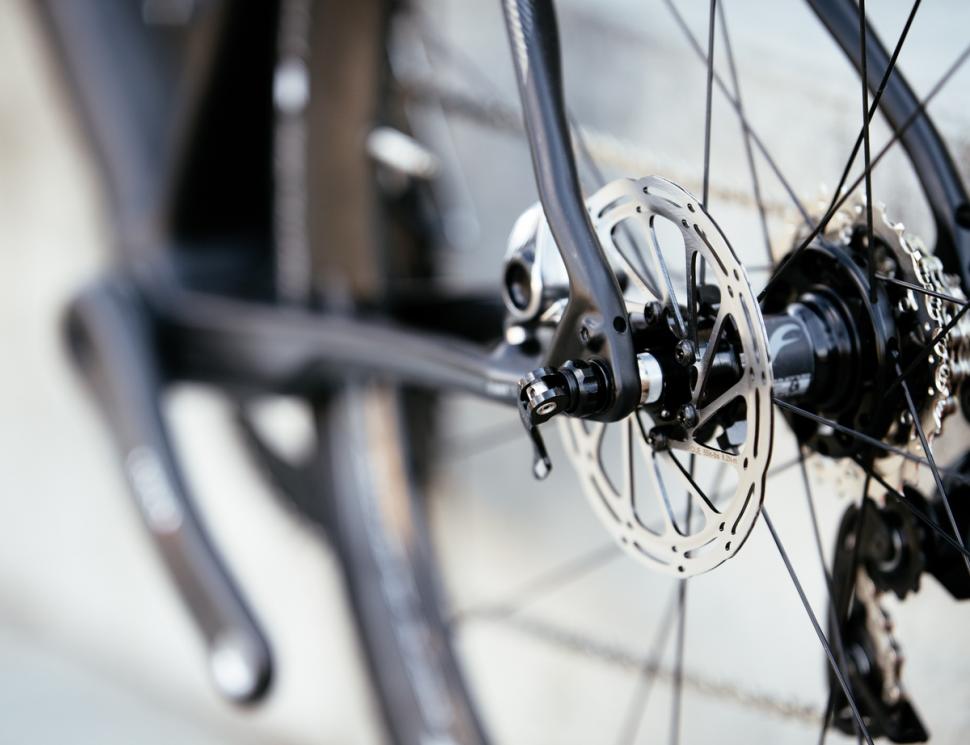 The axles are 12mm front and rear. Many disc-equipped bikes have been combining a 12mm rear thru-axle with a 15mm front thru-axle, a standard borrowed from the mountain bike world, but there’s much speculation that the road industry will standardise the smaller diameter front axle because of the small weight saving.

The Paralane, as with most endurance road bikes, offers a higher stack and shorter reach compared to a race bike. To achieve the higher stack, Focus hasn’t simply stretched the head tube but instead has lowered the bottom bracket and increased the length of the fork. With the increased fork rake and slacker head angle, these are changes that should ensure the Paralane is more stable and surefooted, whether on a high-speed descent or a rough road surface. 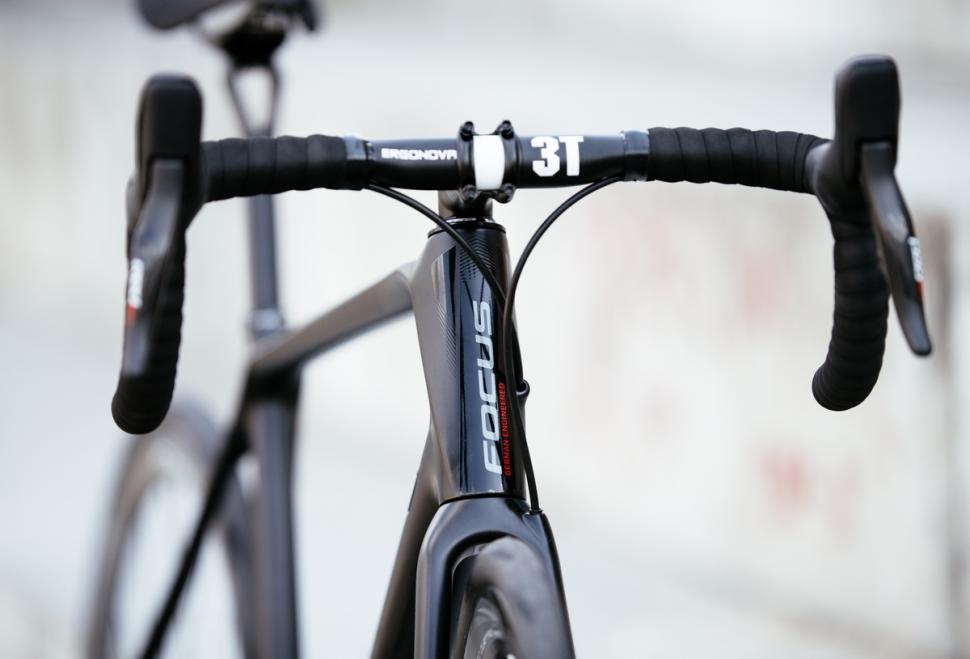 A size medium has a 375mm reach and 577mm stack, with six sizes available. Helpfully, Focus prints the stack and reach on a sticker on the frame to help the bike shop and consumer choose the right size bike. The 56cm size has a 72-degree head angle, 75mm bottom bracket drop, 180mm head tube, 46mm fork rake, 1,015mm wheelbase and 560mm top tube.

A great deal of effort has been spent on producing a frame that offers a comfortable ride. “We want to offer people who are passionate about cycling a road bike that they feel safe and, above all, comfortable on - especially on long rides with a wide variety of road surfaces,” explains Fabian Scholz, Focus engineer. 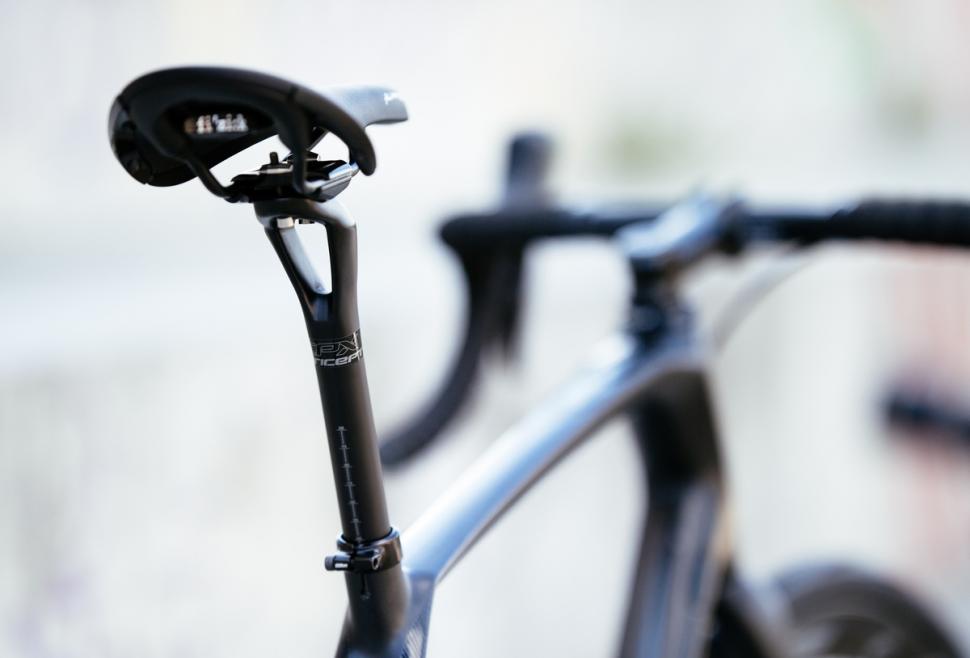 To develop the required frame comfort, Focus looked to its Raven Max carbon fibre 29er hardtail (launched last year) and borrowed the Comfort Improving Area (CIA) technology. This basically involves the examination of every tube profile, shape and wall thickness, and testing different combinations to find the optimum shape for the chainstays, seatstays and seat tube. The telltale changes that have resulted from this development are the flattened chainstays, squashed seat tube and very small diameter seat stays. There isn’t a single round tube on this frame. 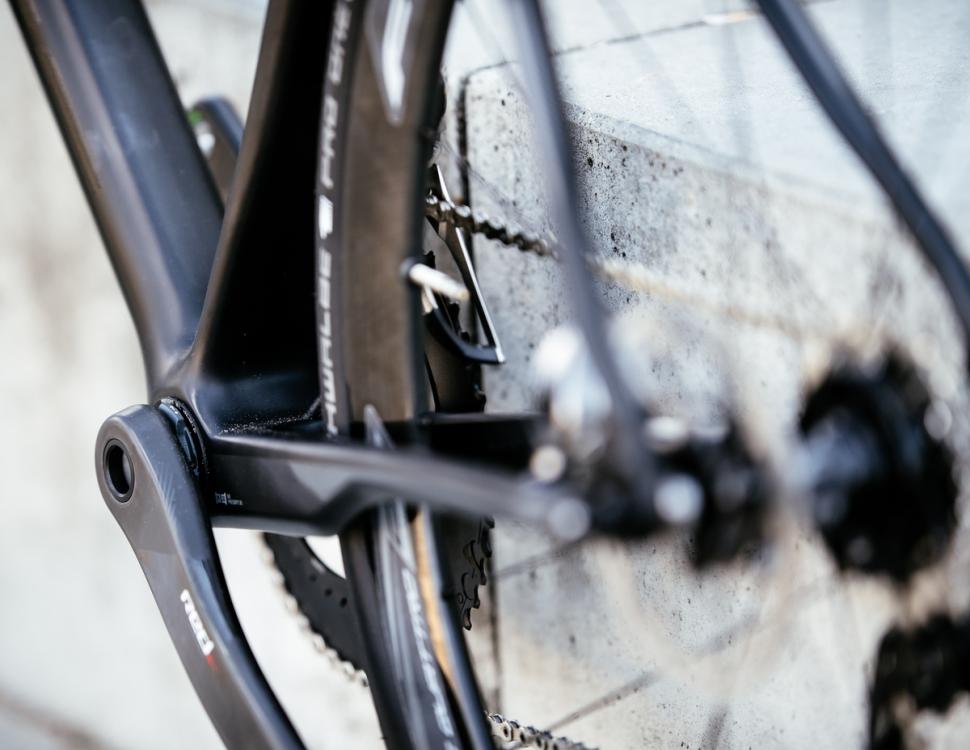 Up front, there’s a tapered head tube with the company's signature sculpted shape. A sloping top tube increases the amount of seatpost extension which, in combination with the flattened seat tube, provides increased deflection. Taking a leaf out of Cannondale’s book, Focus has given the new frame a 25.4mm seatpost and developed a new version of its Concept CPX Plus seatpost.

All of these changes contributed to a claimed 20% improvement in comfort compared to the Izalco Max Disc. And as I found when I reviewed that bike earlier this year, it’s not exactly an uncomfortable bike. Despite this quest for stiffness, the frame isn’t lacking stiffness. Focus tells us the head tube stiffness is 87 N m/° and the bottom bracket is 60 N/mm. Make of those numbers what you will. The full carbon fibre frame is made with the now familiar SSPS technology, which refers to each frame size having its own dedicated carbon layup and tube profiles. It's something a lot more bike companies are doing these days. Focus has always prided itself on delivering frames that are competitive on weight, and while weight wasn't a key priority with the Paralane, at 907g for a size 54, it’s certainly very competitive with its key rivals. That figure includes all the bolts and fixings (but not the RAT thru-axle) and the paint.

You can fit mudguards

A big appeal of endurance disc bikes is their versatility. Being able to accommodate mudguards for winter riding and commuting, only to remove them for the clean lines and weight saving for tackling summer sportives, it's a nice extra feature to have. And with the adoption of disc brakes, there's much more clearance space for wide tyres and mudguards than many traditional touring and winter bikes. Quite a few carbon fibre endurance disc bikes don’t feature mudguard mounts, though, but growing demand has seen more manufacturers push their frame engineers to incorporate eyelets. 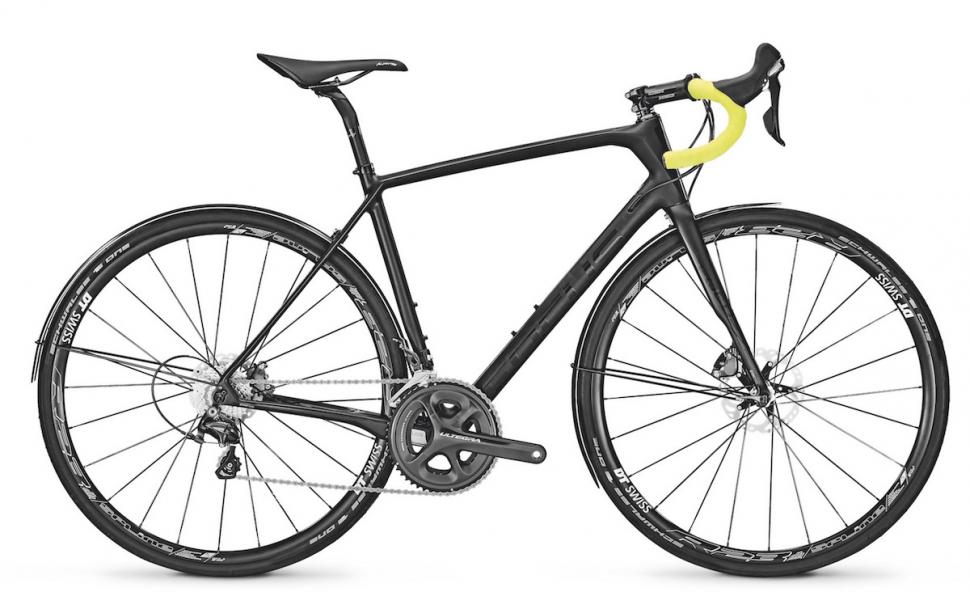 So the Paralane accepts mudguards, which is good news, but it gets better. Focus has actually developed its own mudguards specifically for the bike. It has worked with Belgian company  Curana to develop its own mudguards that fit seamlessly on the bike, with branding to complement the frame. 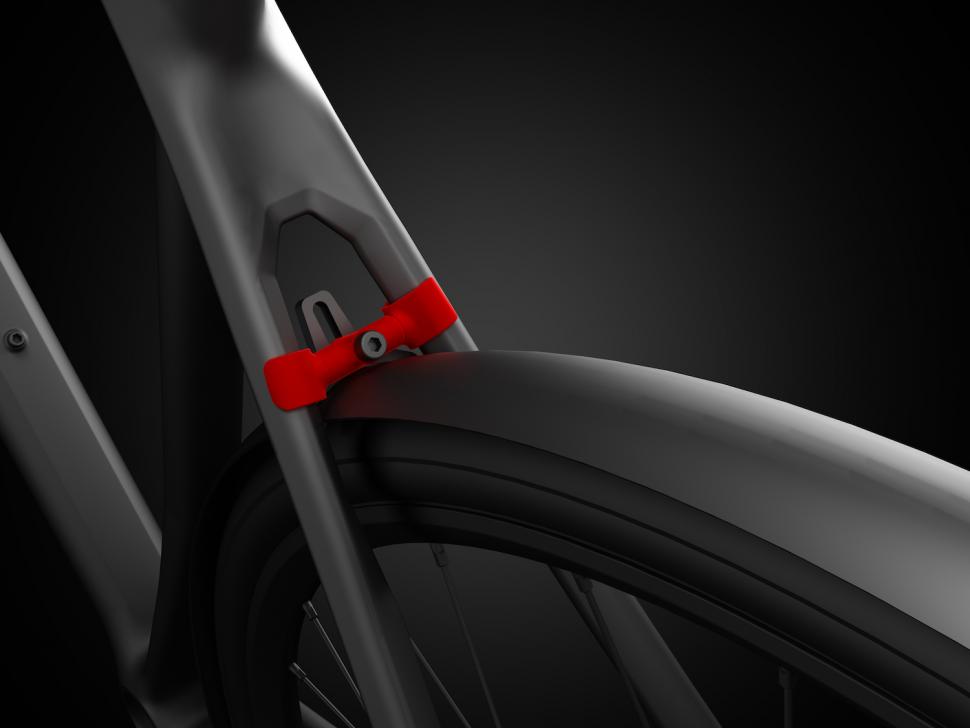 Being a disc-specific bike means there’s no need for the traditional brake bridge, but to allow the fitment of mudguards, Focus has developed a neat little clip-on bracket, like we’ve seen from other brands such as Bowman before.

The Paralane range is priced from £1,399 up to £4,799, with a choice of carbon and aluminium frames. They’re each equipped with hydraulic disc brakes, down to Shimano’s RS405 calipers on the most affordable models, and 28mm tyres are used across the range. The flagship Paralane eTap (£4,799) model will be adorned with the brand new SRAM eTAP HydroHC groupset, combining electronic gears with hydraulic disc brakes, and finished with Schwalbe One 28mm tyres on Fulcrum Quattro Carbon DB wheels. Considering most of the eTap-equipped bikes we’ve seen so far this year, that’s an impressive price indeed. I certainly had to double check the price when typing it out. 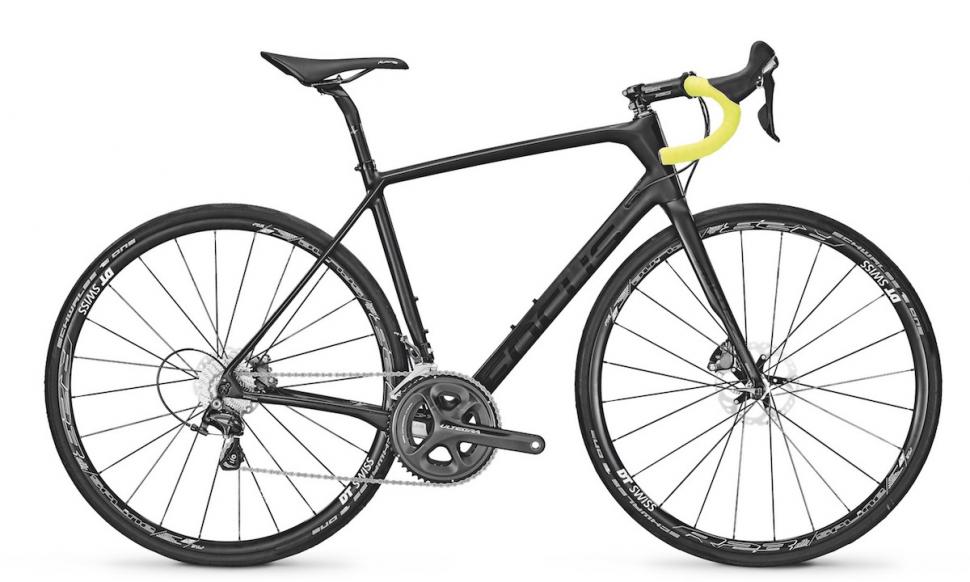 Next up is the Paralane Ultegra (£2,999), and this is the bike I rode at the launch event ( the , first ride is coming soon). It’s available in two colours and uses a mechanical Ultegra groupset with RS685 hydraulic disc brakes, DT Swiss R23 wheels and Schwalbe One 28mm tyres. 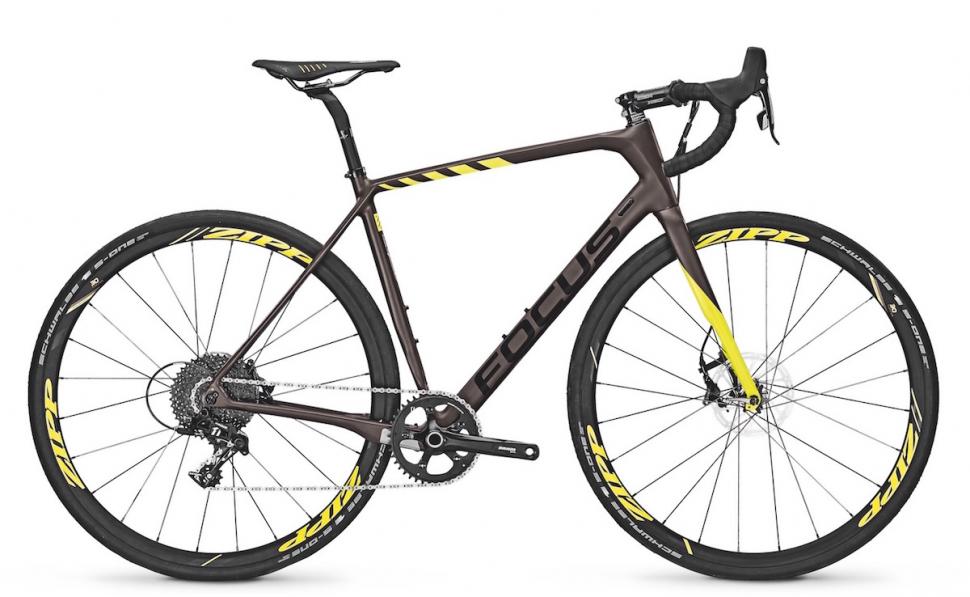 The Paralane Factory (£3,199) is built around a SRAM Apex 1x11 groupset, with hydraulic disc brakes and an 11-36t cassette. In a novel move, the frame is actually 1x11-specific, there is no redundant front mech mount to spoil the otherwise clean lines. 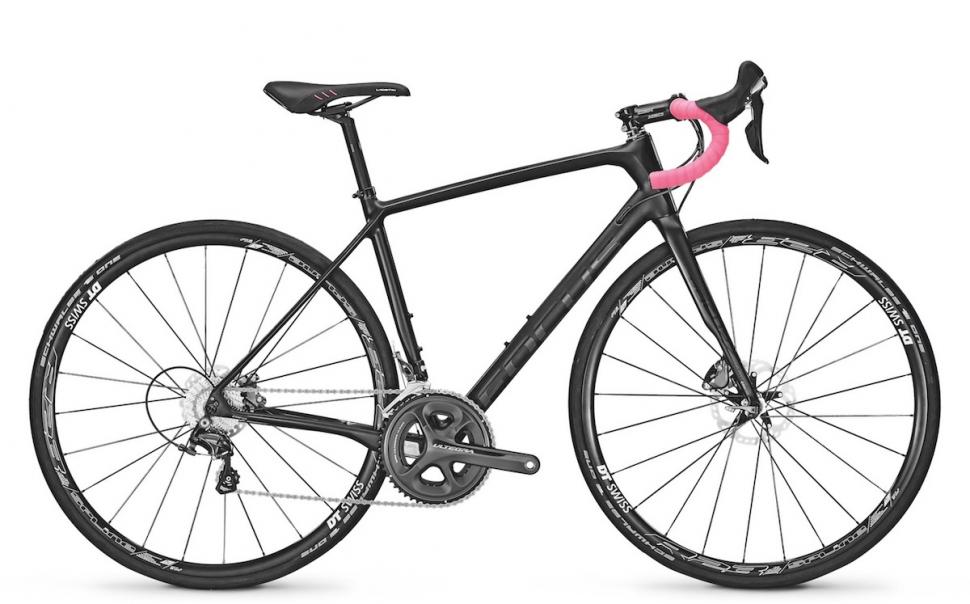 It comes in aluminium, too

Not only does the Paralane come in carbon fibre, but Focus developed an aluminium version. The frame mirrors the carbon version with the same geometry, RAT thru-axles, 25.4mm seatpost, 35mm tyre clearance and mudguard mounts, and uses the same carbon fork. The aluminium frame benefits from rear rack mounts, making it an ideal candidate for touring, adventure and Audax use.

The frame is an impressive bit of engineering, and even close up it looks like a carbon frame. Extensive use of hydroforming has shaped the tubes to very closely mimic the carbon version, though there are clear differences in the chainstays, while smooth welds disguise the fact it’s a welded metal frame.

The top-end model in this aluminium range is the Paralane AL Ultegra (£1,899) with a mechanical Ultegra groupset and hydraulic disc brakes. 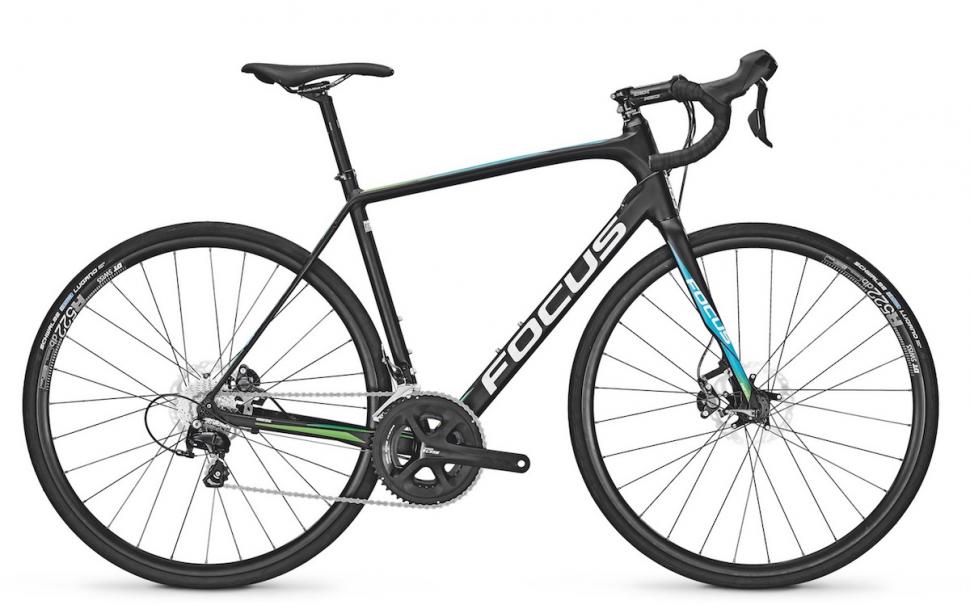 Fortunately, I had the opportunity to get a decent ride aboard the new Paralane and I'll be publishing my first ride report very soon.