A lively, sharp-handling alloy frameset updated with disc brakes for £750
by Mat Brett

The new Kinesis Aithein Disc is a stiff and spirited aluminium road frameset that will appeal to people who like to take the battle to the roads, hammering the climbs and hitting the descents equally hard. It is priced £749.99.

We followed the development of the original Aithein in detail here on road.cc, from the initial design right through to the completed frameset. That was when Dom Mason was doing the designing at Kinesis UK. The Aithein Disc is a post-Dom creation. 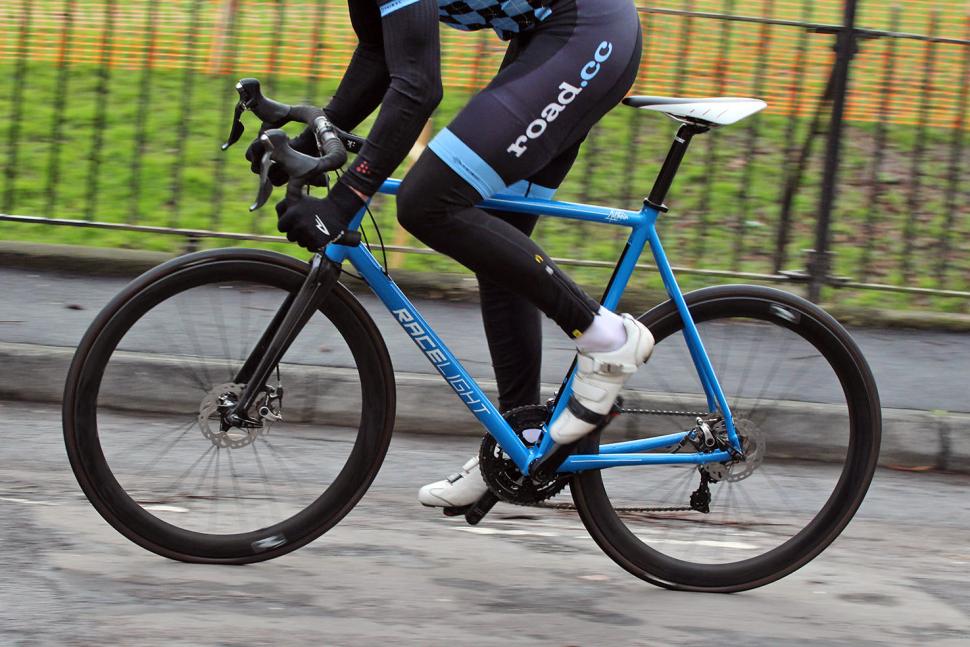 Well, for a start there are disc brakes (the clue’s in the name). Then there’s a slightly tweaked geometry, internal cable routing, clearance for at least 28mm tyres, and a threaded (rather than a BB86) bottom bracket. But we’ll come back to all those features later. First, the ride. 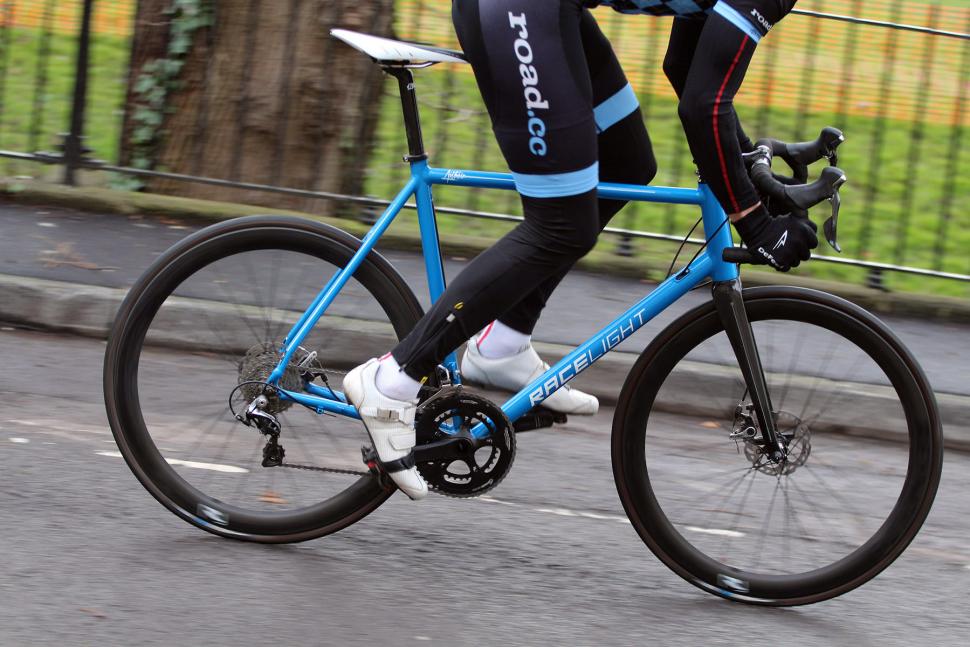 I had the chance to ride the Aithein Disc for the first time at the road.cc Bath Rideout and held on to it for the next fortnight. In that sense, this is more than a First Ride and a little less than a full test.

It’s a lively bike that prioritises speed and reaction. It accelerates smartly, rewarding the effort you put in with a quick turn of pace. 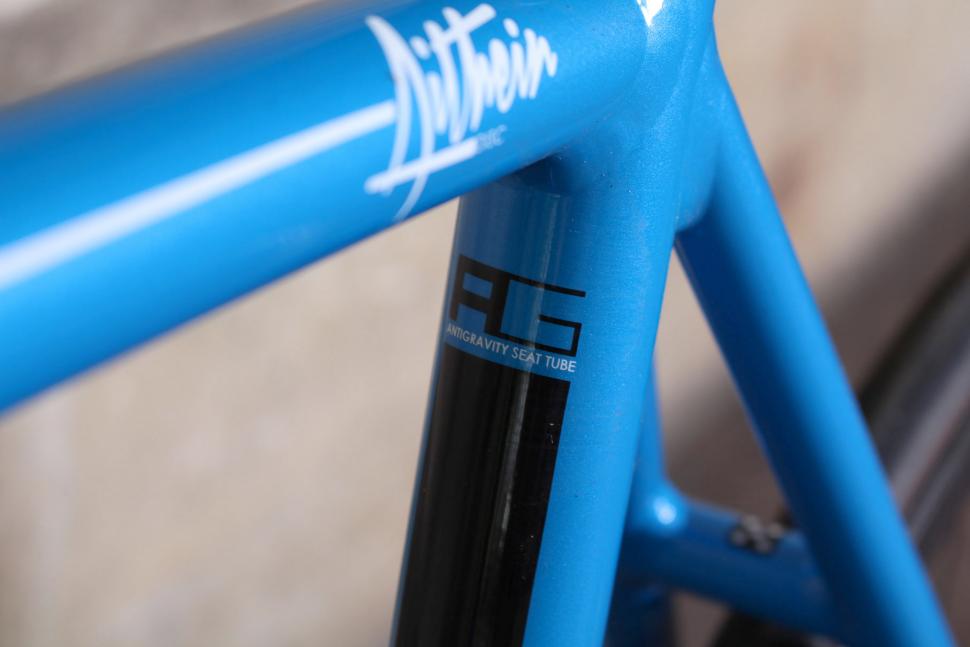 Although Kinesis has switched from an oversized BB86 bottom bracket to a threaded 68mm design (more on that later), there’s no shortage of stiffness through the centre of the bike. Far from it; you hit the pedals hard and the frame more than holds its own. It’s particularly impressive on short and sharp power climbs, the kind where you get out of the saddle and blast as hard as you can to carry your speed up and over the crest. Many frames are found wanting in that situation, flexing from side to side if you don’t keep your pressure perfectly central, but the Aithein Disc is a solid construction and doesn’t shift. 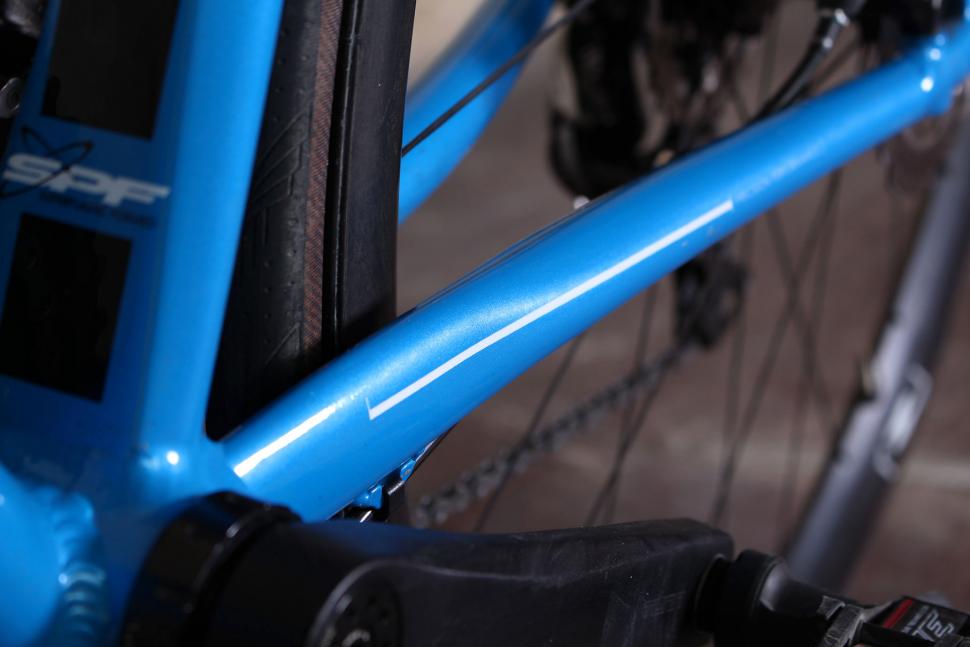 It’s also a highly flickable bike. I was riding a frame that’s slightly larger than I usually take but I still found that I could move it around sharply when I needed to change line around other riders and to avoid dodgy bits of road. The steering is still the right side of twitchy, though. You don’t need to keep the Aithein Disc on a particularly short leash to stop it from doing its own thing.

You can whip it through the corners too. This is a bike you can lean over hard from one side to the other and feel confident that it’s going to behave impeccably.

If that gives you the impression that this a performance-focused bike, you’d be right. It’s nimble and agile with good reactions. The Aithein Disc’s other welcome characteristic is that it doesn’t beat you up. With its large diameter (31.6mm) seatpost it could be quite a firm ride, but the ability to take fairly wide tyres allows you to control that.

We had 28mm-tyres on our review bike. You might possibly get 30mm tyres in there on some wider rims – it’s the depth of the clearance rather than the width that’s likely to be the limiting factor, and a wider rim will give you a shallower tyre profile. 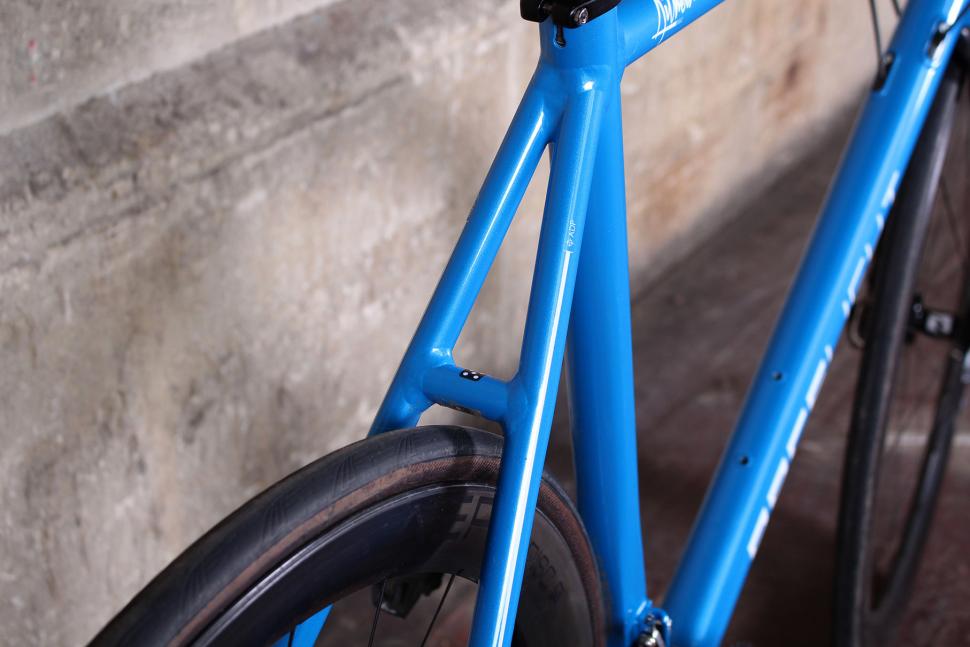 If you’re worried about 28s, the wider tyres don’t make the bike feel at all sluggish, they just add a little more forgiveness over the rough stuff and the long haul. With these fitted you wouldn’t say the Aithein Disc offers an exceptional level of comfort compared to some endurance bikes, but it’s certainly not a harsh ride.

So, about those disc brakes… The Aithein Disc frame follows the trend to Shimano’s flat mount design although if you want to fit post mount brakes you get an adaptor as part of the package. The front brake is flat mount too. Yes, the fork shown here is post mount but that’s because we’re soooo far ahead of the game here at road.cc that the new fork wasn’t ready for our test rides. It is now, and that’s what will be fitted as standard. 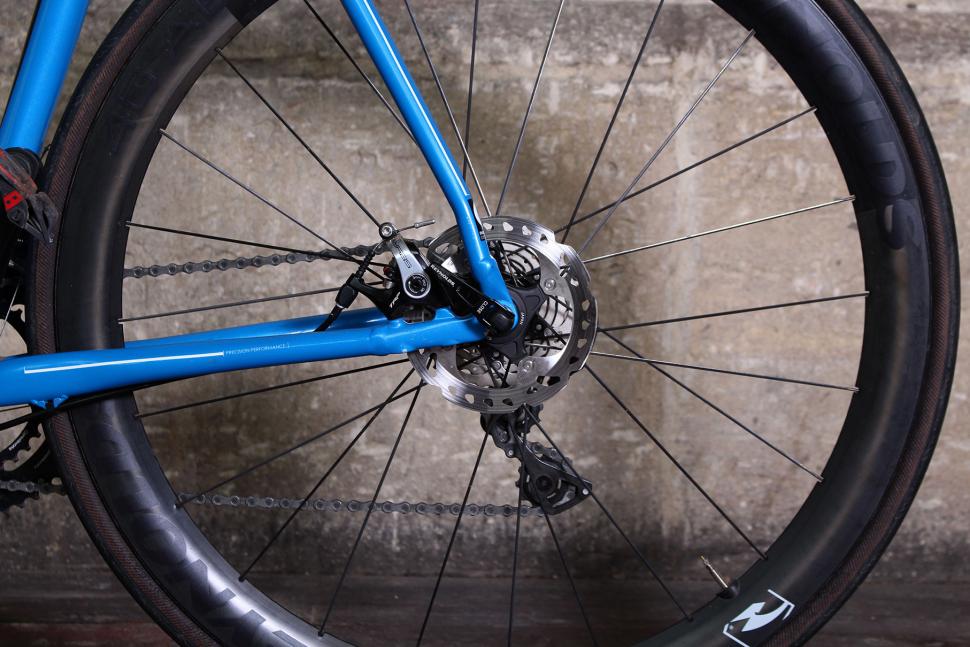 The Aithein Disc’s geometry is slightly different from that of the rim brake model, but you’d do well to notice unless you jumped straight off one and onto the other. Kinesis has slackened the head angle on the disc model by 0.5°, the idea being to make it feel a little more subdued. The change extends the wheelbase very slightly, something usually associated with a bit more stability, without the need to shorten the back end. 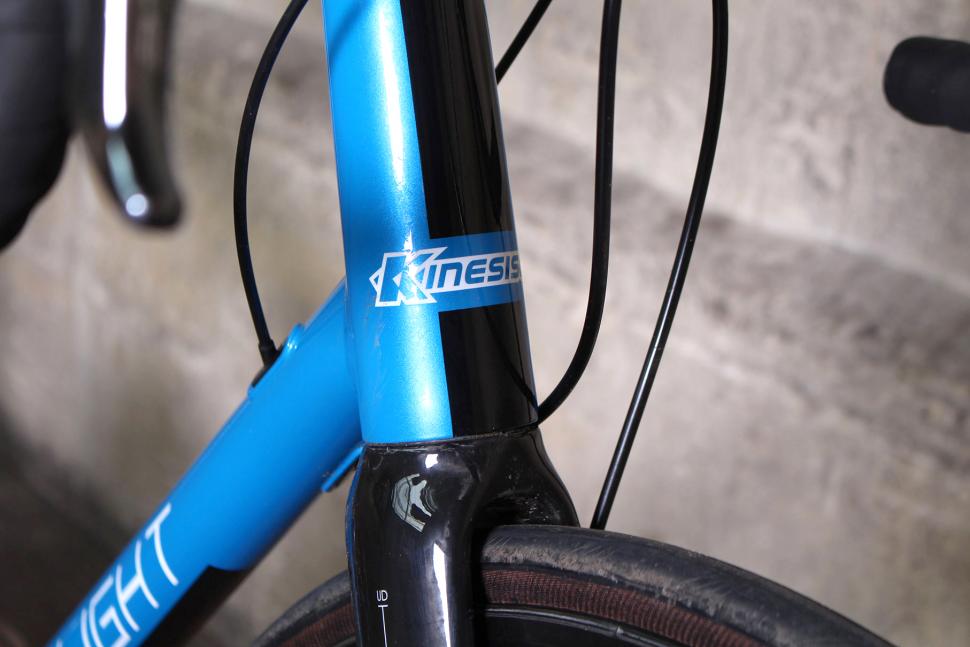 That aside, the geometry remains the same as before. We had the 59cm model which is aimed at riders of 182cm (5ft 11.5in) to 192cm (6ft 3.5in). This one has an effective top tube of 595mm and a head tube of 200mm. The stack (the vertical distance from the centre of the bottom bracket to the top of the head tube) is 594.3mm and the reach (the horizontal distance between those two points) is 413.3mm.

More people are going to be interested in the 56cm model that has a 565.8mm stack and a 397mm reach.

That’s a performance-focused geometry more like that of a race bike than an endurance bike. That’s the way I felt riding the Aithein Disc. As I mentioned above, I usually take a bike a little smaller than this but I didn’t feel the front end was too high, and that’s among my main criteria for judging whether a particular model is for me or not. Life’s hard enough without taking the air full on your chest when you’re cycling! Call me greedy but I like to get as much speed as possible for my efforts. 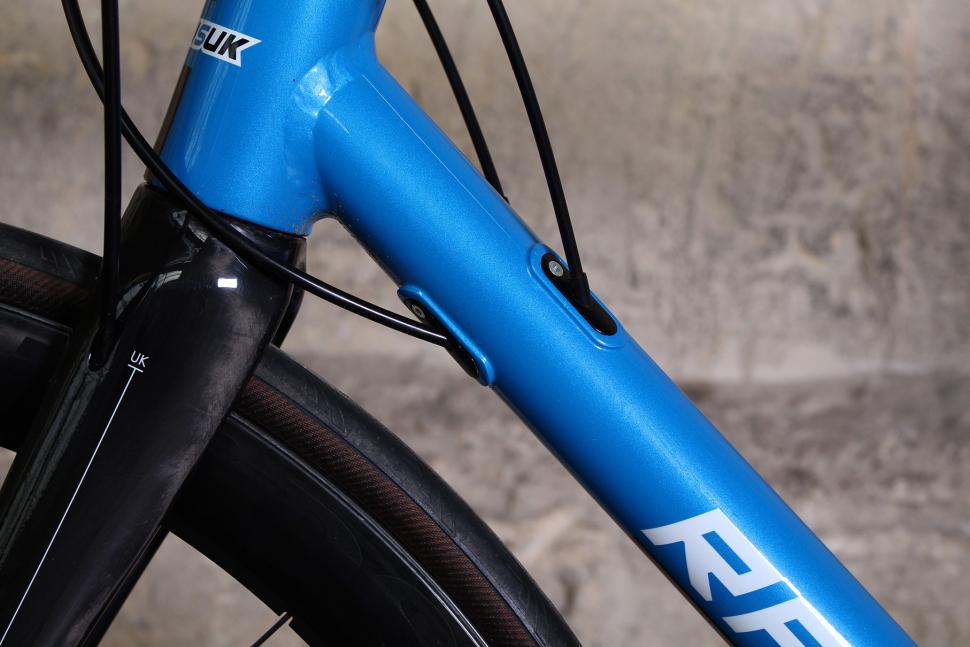 Unlike the Aithein, the Aithein Disc features internal cable routing, the derailleur cables and the rear brake cable all heading into the down tube to keep everything looking a little neater. The frame is fully compatible with electronic shift systems if you want to go down that route.

As I said, the bottom bracket is a threaded BSA 68mm design. Pressed in bottom brackets have been in the ascendancy for years so why has Kinesis decided to move in the opposite direction?

The brand thinks that the rider who’s likely to buy this bike is odds-on to do their own maintenance, and threaded BBs tend to be less hassle to install/remove/maintain than most pressed in models. Kinesis might have been tempted to go for the new T47 oversized, threaded standard but at the time of design it wasn’t able to manufacture the BB shell in that standard. 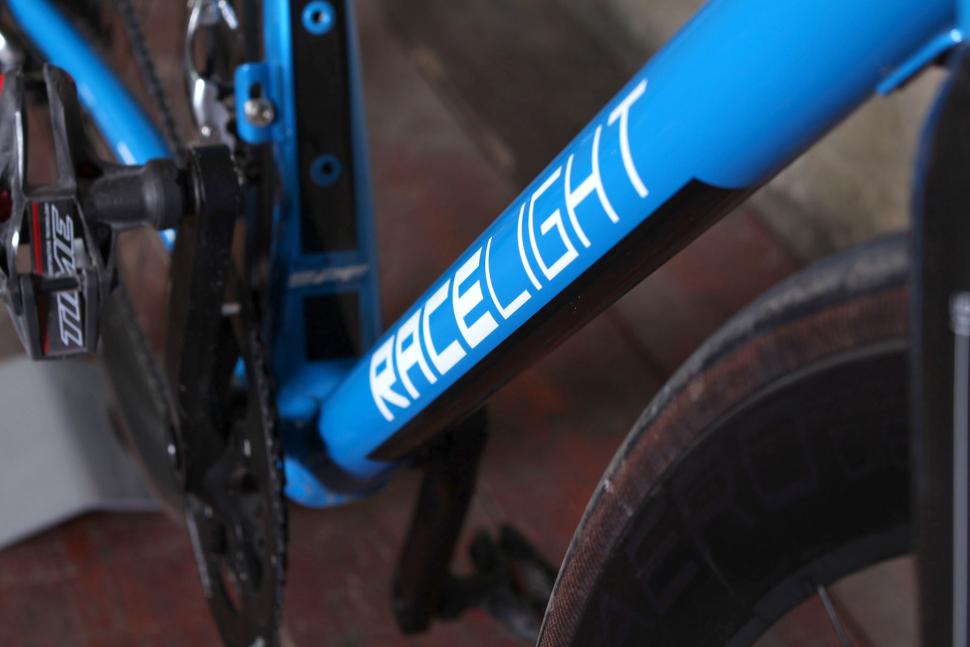 The frame is made from Kinesis’ own Kinesium tubing shaped using its SPF (super plastic forming) technique (find out more about that here). Kinesis says this allows it to get the stiffness and strength it wants at a low weight. The Aithein Disc frame weighs about 1,500g – around 300g more than the non-disc version.

The seat tube is asymmetric, bulging out on the non-driveside to provide stiffness but much flatter on the driveside to offer the space needed for the frameset. The head tube is tapered, taking a 1 1/8in upper bearing and a 1 1/2in lower bearing.

The fork that slots in there, like the frame, takes a standard quick release skewer; neither the front nor the rear is thru-axle. 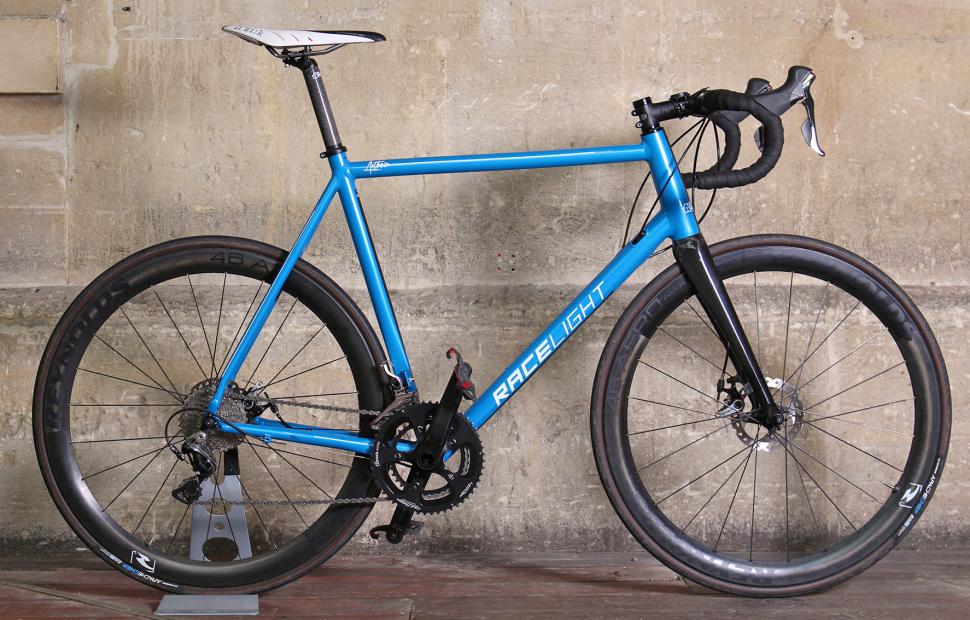 Selling alloy bikes at anything other than entry-level price points is difficult these days because many people make the mistaken assumption that carbon-fibre is necessarily better. If you can see beyond that and want a strong, sharp-handling bike for quick club rides or smashing out swift Strava times, the Aithein Disc is certainly worth considering.