Is this the bike that will win Tour of Flanders on Sunday?
by David Arthur @davearthur

Is this the bike that will win the 100th edition of Tour of Flanders on Sunday? It is Peter Sagan’s Specialized Tarmac race bike, of course, the man hotly tipped to be crowned victorious when the race reaches Oudenarde where the 255km cobbled classic finishes. 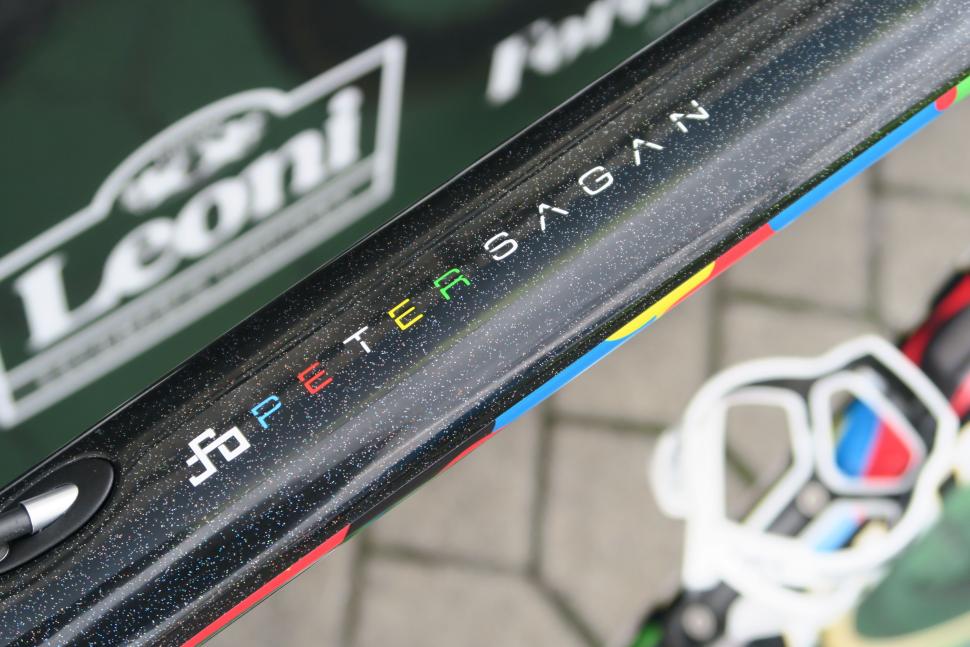 Close inspection reveals there is nothing radical on display (certainly no disc brakes), it’s very much a case of tried-and-tested equipment, the same he has been using all season. The most notable change is the 36t inner chainring in place of the regular 39t. Combined with an 11-28t cassette, it’ll provide some useful lower ratios for the steeper bergs like the Koppenberg and Paterberg. 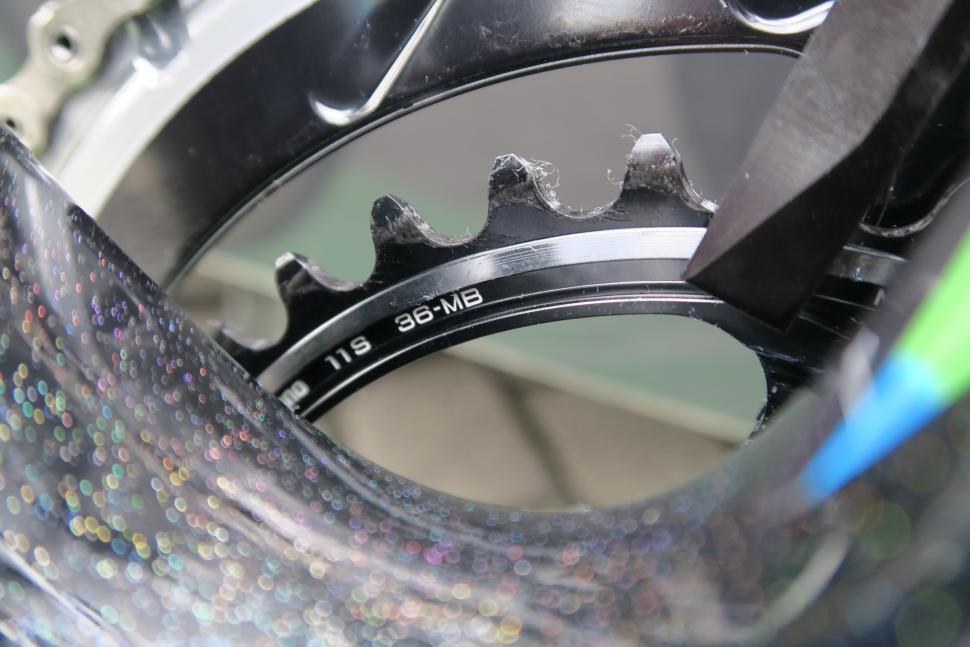 All the components are bolted to a Specialized Tarmac frame, painted in the custom livery  that celebrates Sagan's winning of the World Championships in 2015. It’s a pretty stunning paint job when you see it in the flesh. You have to be confident to ride such a bike though, something which Sagan doesn't lack one bit. 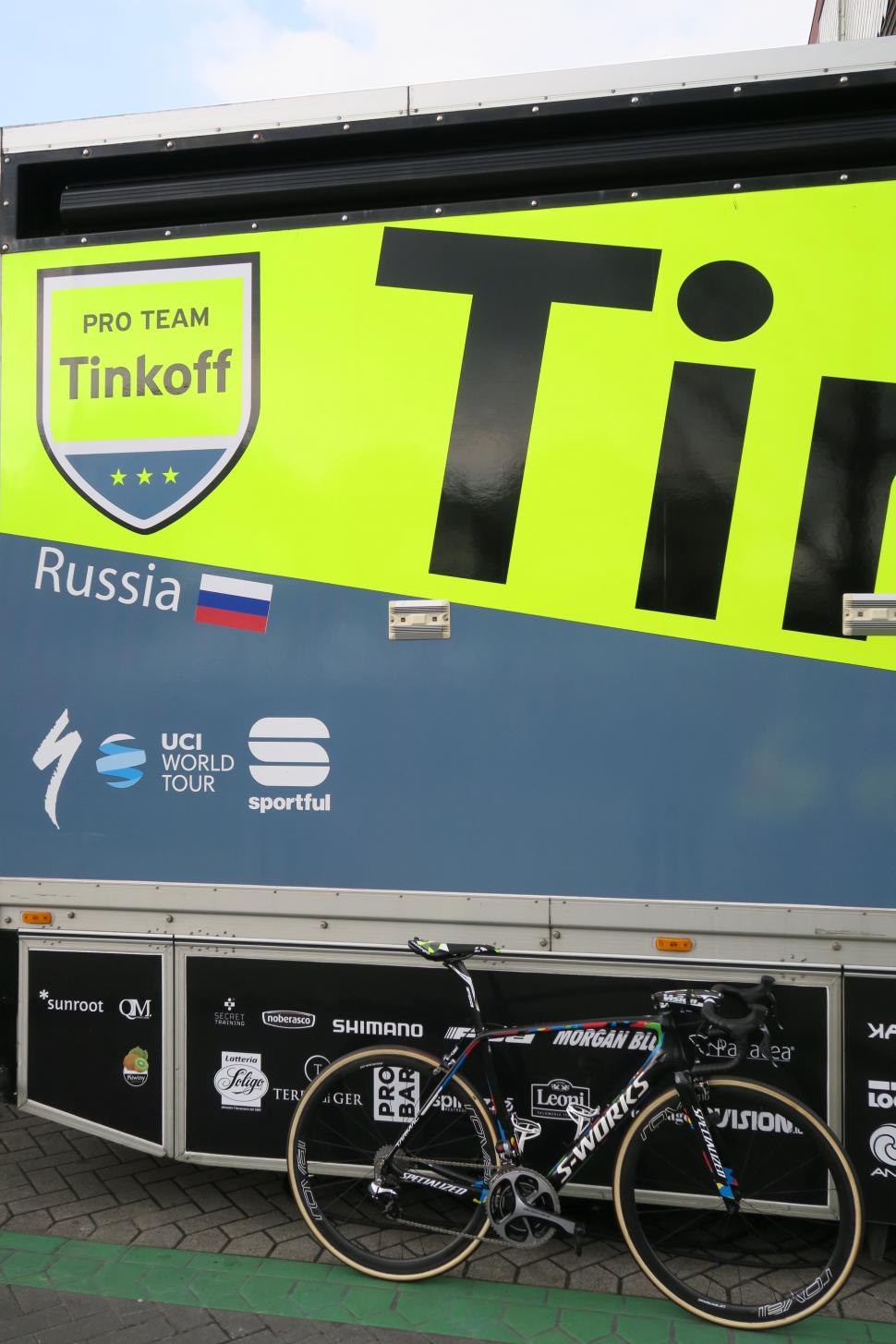 It's not the bike he'll start the race on, it's one of his spare bikes, but all his bikes are identically built and setup so he can easily jump onto any of them and not notice any difference in position.  One noticeable difference on this bike is the lack of a power meter, though there is a handlebar bracket for the SRM computer he'll no doubt be using on his main race bike. 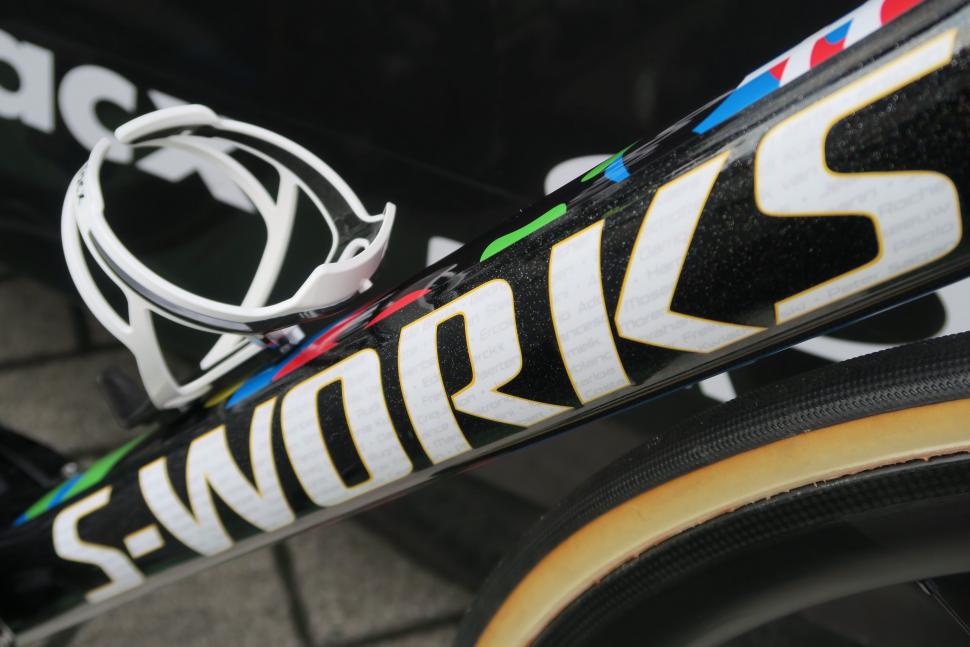 Size wise, it looks like a stock 56cm to us, but Sagan used to ride custom frames at Cannondale (which combined a 58cm top tube with a 54cm seat tube for the long and low position he favours) but that doesn't look to be the case here. We sadly didn't have our tape measure to hand, otherwise we'd be able to confirm the size. 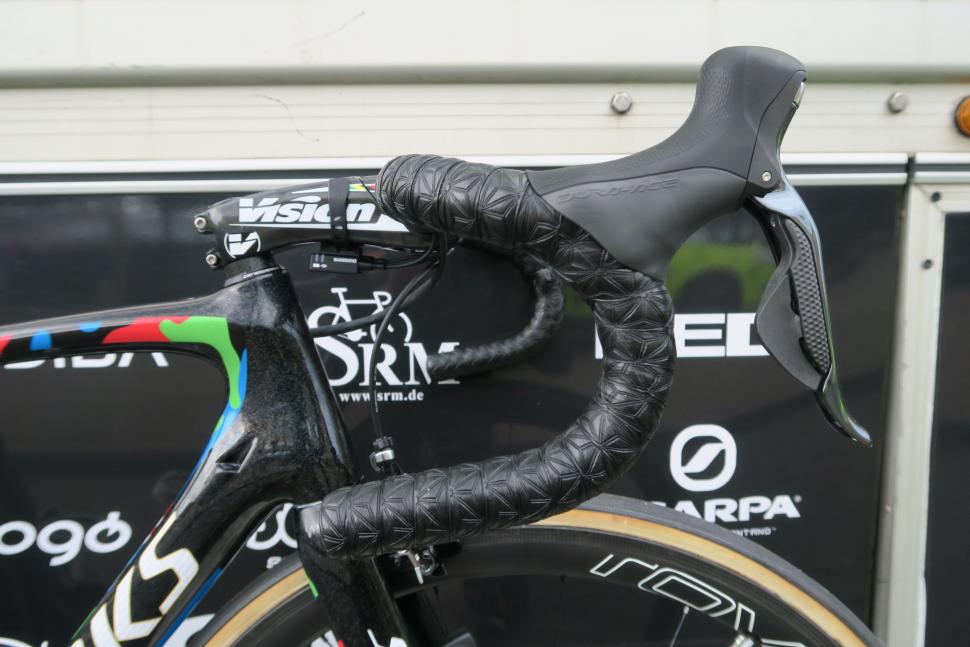 This photo lets you examine the handlebar and hood setup of Sagan’s bike. The stem is a Vision Aero Stem with a generous spacer between the CeramicSpeed top headset spacer. We didn’t have our tape measure to hand, but the Vision website lists 130mm as the longest though we do know Sagan has used 140mm length stems in the past. 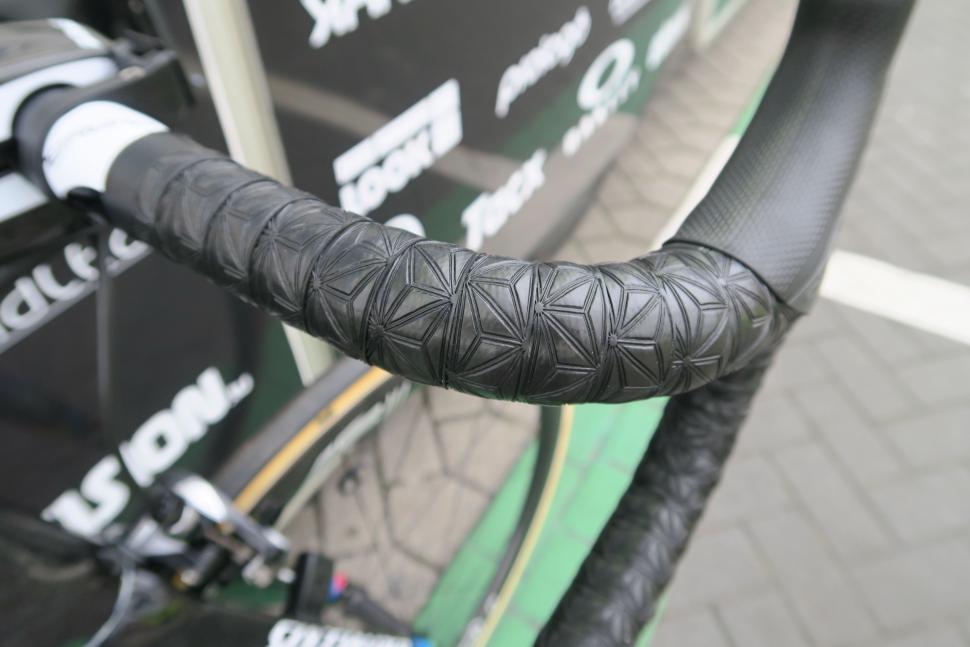 Some riders like to double up the bar tape to provide extra cushioning when battling over the cobbles, but Sagan goes with just one layer of bar tape. What brand bar tape is it? It’s Supacaz, which road.cc reviewed some time ago. It’s the first time we’ve seen it in the professional peloton, though. 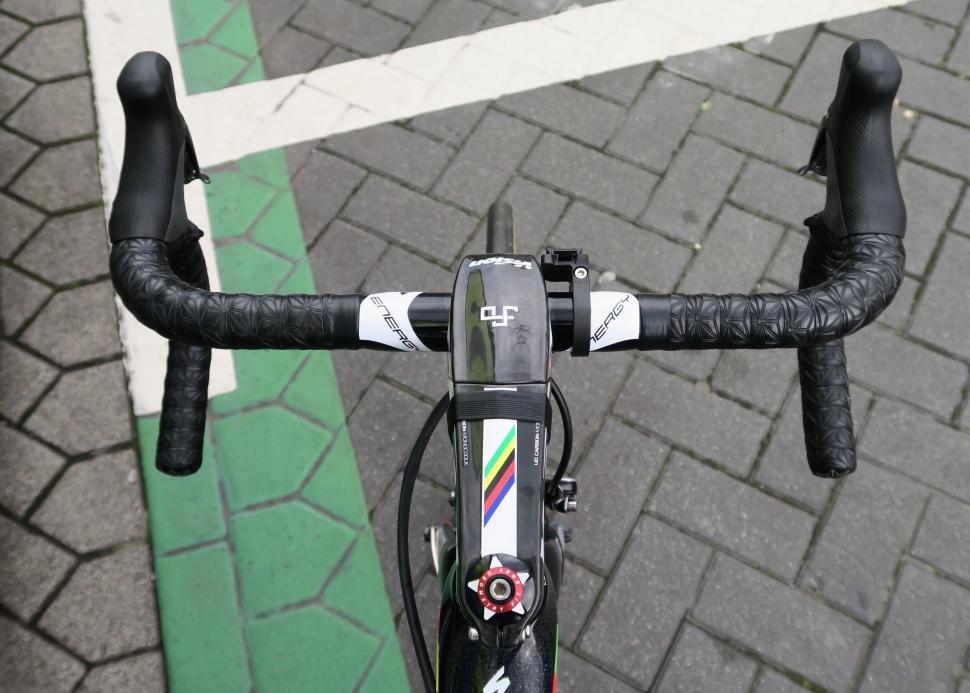 Peter Sagan's view of the front end of the bike. 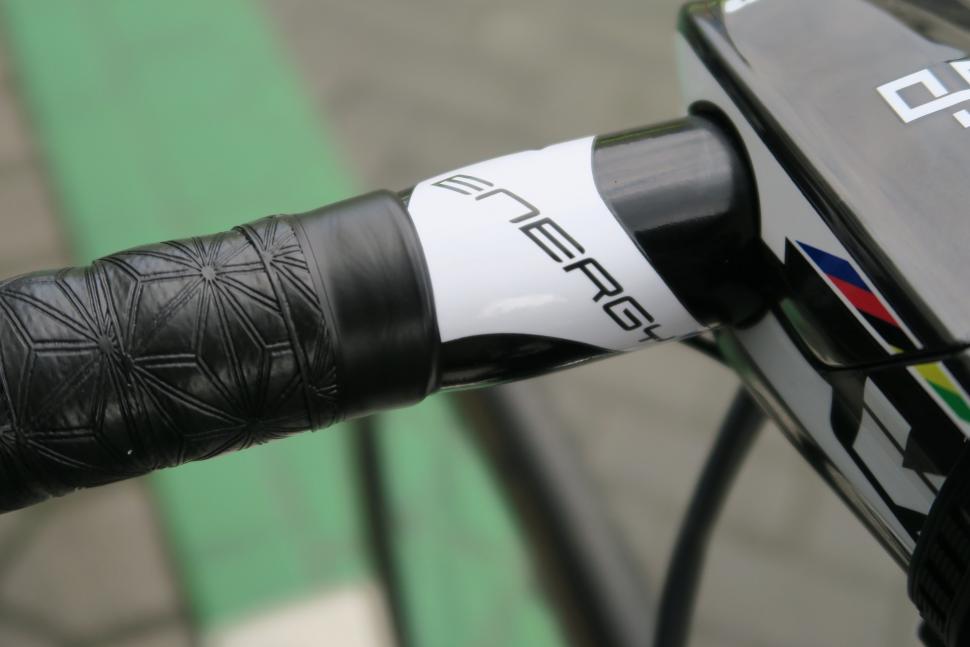 It’s common to see aluminium handlebars on pro race bikes, and especially for the cobbled classics. Sagan uses an FSA Energy Traditional handlebar. It’s made from double butted and tapered aluminium with a flat top section and weighs in at 269g, not exactly super light. A large number of pros favour a traditional bend as well, this one has a 125mm drop and 80mm reach. 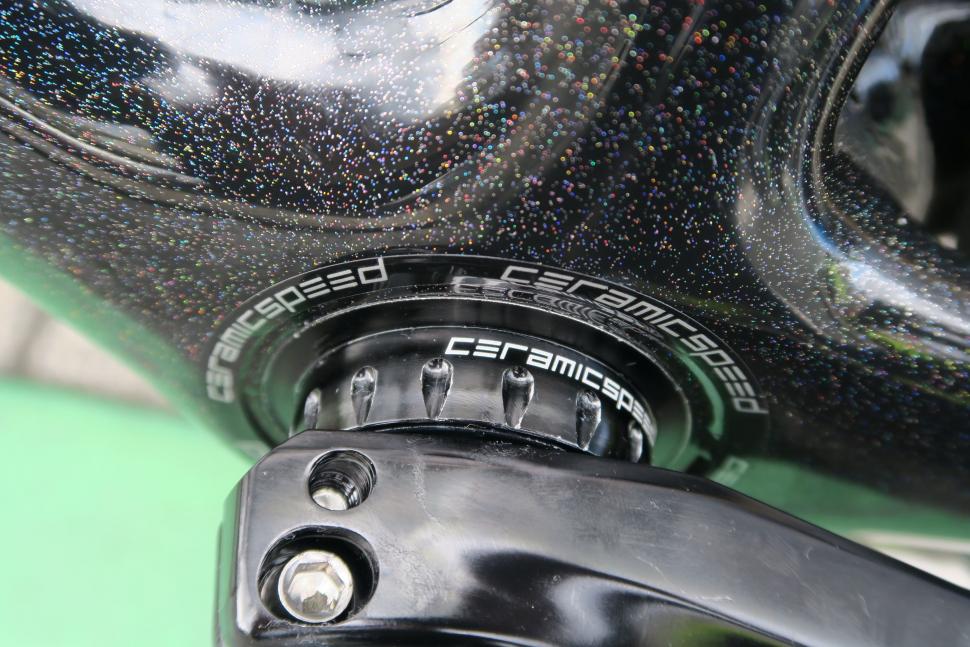 The bike is decked out with a full Shimano Dura-Ace Di2 11-speed groupset, with SwissStop brake blocks and CeramicSpeed bottom bracket hubs. CeramicSpeed bearings are also found in the hubs of the Roval CLX40 Rapide wheels, a 40mm section carbon fibre tubular. 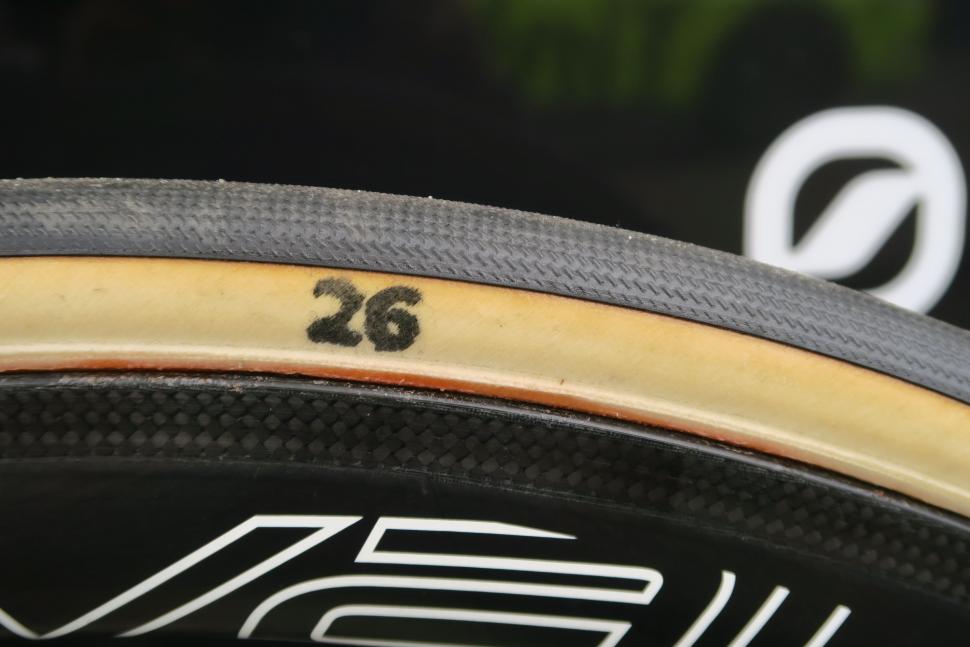 Conditions are good in Flanders for the weekend, dry and sunny, although not warm. Tyre width is standard fare, with 26mm Specialized tubulars in this instance. We had a look around some other team bikes and 25mm seems to be popular, the same as used in regular road races. The wide tyres and special frames really only come out for Paris-Roubaix, as the cobbles in the Tour of Flanders are maintained to a high enough standard that permits regular race bikes and tyres to be ridden.. 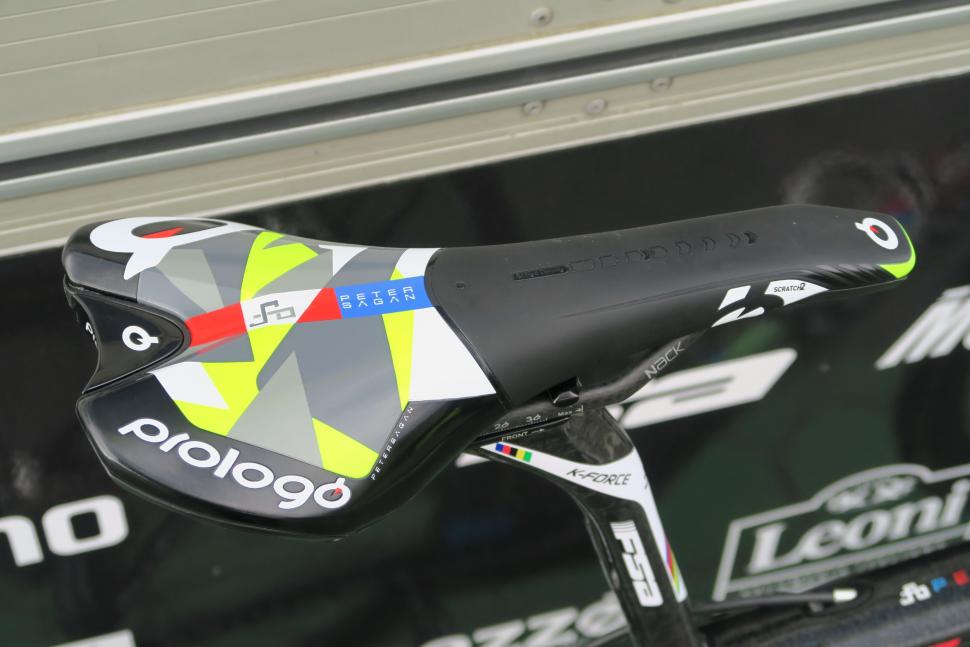 Carbon fibre rails on his personalised Prologo Scratch 2 Nack saddle. Most of the components, in fact, have been customised for the bike, including the FSA seatpost, Vision stem and Keo pedals. 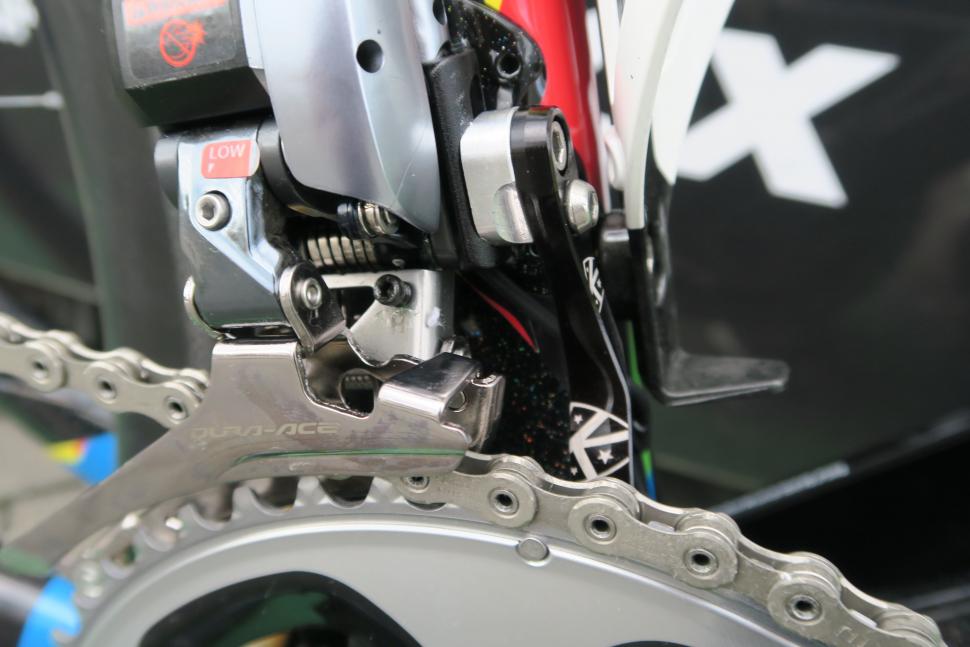 A chain catcher is a common sight during the classics season. It's a small metal device, bolted to the front mech mount, and is intended to prevent the chain falling off the chainring.