Will new mountain bike setup eventually convert to the road?
by Mat Brett

SRAM has introduced a 12-speed drivetrain called Eagle to the world of mountain biking, with no front derailleur; is a similar setup likely for the road market in the not too distant future?

SRAM has been beating the drum for 1x (pronounced ‘one by’) systems – with just a single chainring at the front and a wide-ranging cassette at the rear – for a long time now. Single chainrings have become popular in mountain biking, and SRAM has more recently introduced 1x versions of its Force, Rival and Apex road groupsets. That’s all of its road groups apart from top level Red.

The new Eagle mountain bike groupset is different in that it’s 12-speed as opposed to 11-speed, and it is only available as 1x. There’s no such thing as an Eagle front derailleur. 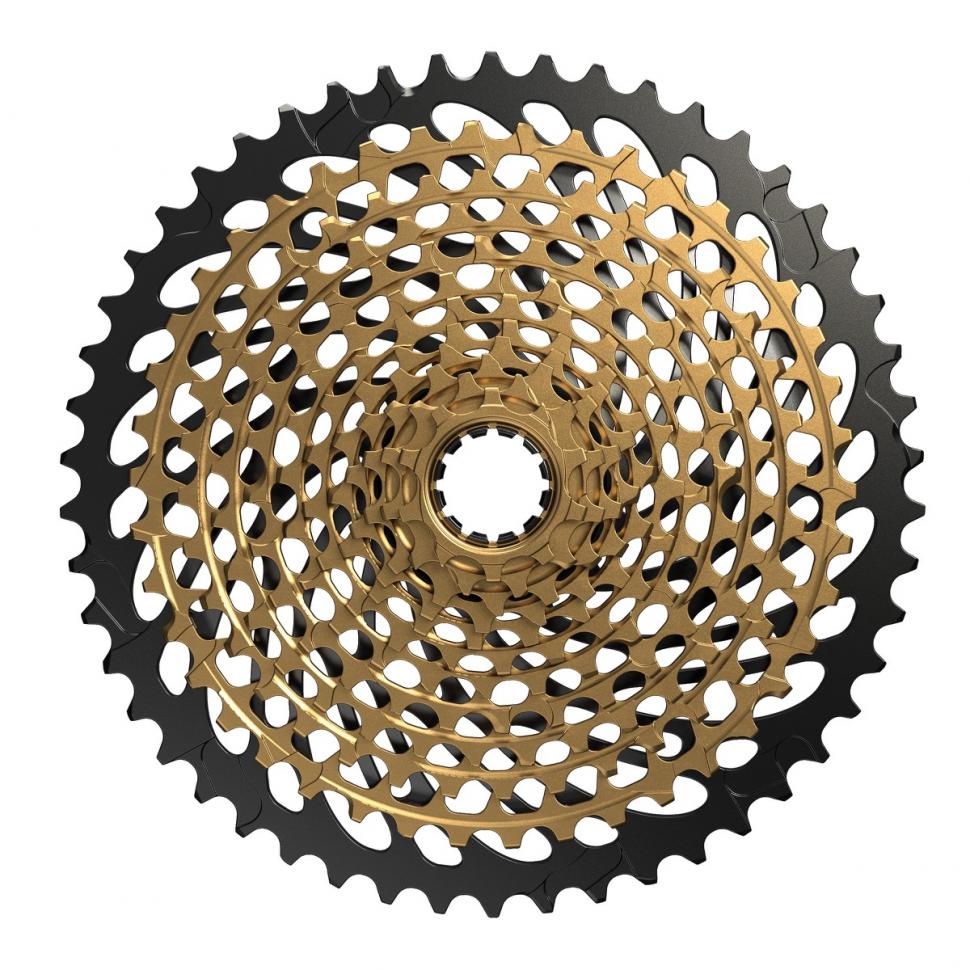 Isn’t that limiting? Well, Eagle offers a 500% gear range (the difference between the bottom gear and the top gear), which is 20% more than SRAM’s existing 1x groupsets. That’s a larger range than a typical double chainring road setup.

The 12-speed Eagle cassette goes all the way from 10-tooth right up to – wait for it – 50-tooth. Bear in mind that 50-tooth is the size of the outer chainring of a compact chainset! You can use chainrings from 30-tooth up to 38-tooth with Eagle.

What’s the point in a 1x setup? SRAM says that it is simpler because there’s no front mech or front shifter, there’s no chance of the chain rubbing on a non-existent front mech, and it’s quieter on rough surfaces.

SRAM says that the interface between the chain and chainring is better because their chainrings have tall, square teeth edges that engage the chain earlier, and the traditional sharp and narrow tooth profile helps manage a deflected chain.

Check out our SRAM 1X First Ride from last year.

SRAM also says, “Eagle has a significant weight advantage over other drivetrains—XX1 Eagle weighs up to 300g less than 2x drivetrains with a similar gear range.”

We won’t go into too much depth on Eagle here because we’re a road website, after all. We’re more interested in whether this suggests that 12-speed is likely to make it on to the road and whether it heralds the death of the front mech. 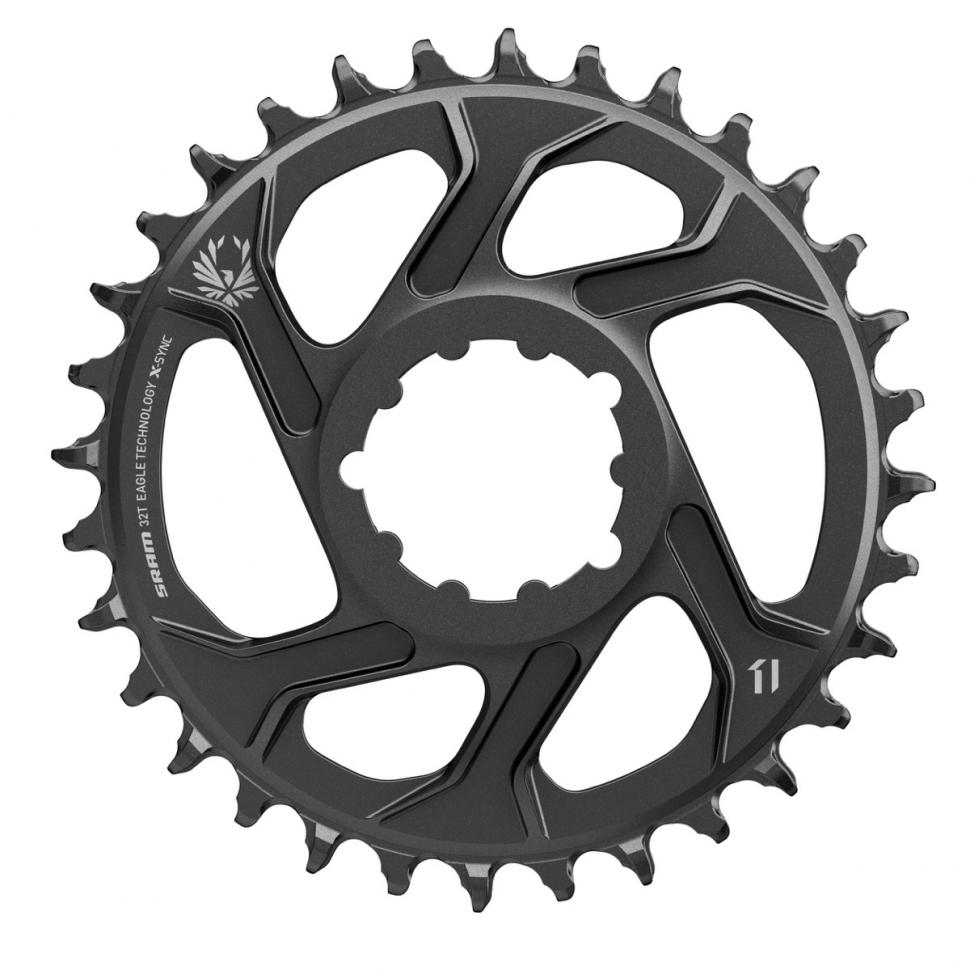 Assuming it was possible, would you ever need a 50-tooth sprocket on the road? Probably not, although if you wanted to run a 52-tooth single chainring in order to get larger gears, having a 50-tooth sprocket (on a bike with a 700 x 25 wheel/tyre) would give you a smallest gear size of 27.4in. That’s only a fraction smaller than you get using the 34-tooth inner chainring of a compact 2x chainset with a 32-tooth sprocket (that gives you a 28in gear).

In other words, the extra range offered by adding a 50-tooth sprocket could conceivably be useful if you wanted both very small and very large gears.

Would the change from 11-speed to 12-speed benefit you? Probably not much, although assuming you didn’t want a 50-tooth sprocket, SRAM could reduce the size of the largest jumps in sprocket size on its current cassettes.

Using SRAM’s 12-speed system requires a mountain bike-style XD Driver body (you already need one of these to use an existing SRAM 10-42-tooth 11-speed cassette) rather than a standard freehub body, but the overall width of the cassette isn’t very different from an 11-speed one because of a narrower chain width and a smaller gap between the sprockets. If your wheels currently take an 10-42 cassette, they’ll take a 10-50 cassette.

We’re guessing that getting a 12-speed cassette to fit to an existing 11-speed freehub body would require some work from SRAM but that it would be possible.

Obviously, SRAM would have to alter the rear derailleur of its existing road systems if it wanted to offer the 500% gear range of Eagle (for Eagle, it has increased the length of the cage and the size of the lower jockey wheel compared with existing models, and updated the Roller Bearing Clutch) but, again, that doesn’t seem beyond the realms of possibility.

We have absolutely no inside knowledge that SRAM is working on such a system but we wouldn’t be at all surprised to see 12-speed coming to a road bike near you shortly.

Let us know your thoughts.

1
Highway Code changes aimed at protecting cyclists to become law next month
2
Owner of van with spiked wing mirror claims it is to deter vandals, not harm cyclists
3
Welsh rugby star Shane Williams seeks “knob head” who stole his one-off bike
4
Road rage driver who rammed and killed cyclist and then boasted about it jailed for 10 years
5
Five cool things coming soon from Black Inc, Met, Koo, 7mesh and Moon
6
Cyclist shot by hunter who says he mistook him for a rabbit
7
Car wing mirrors studded with spikes reported to Greater Manchester Police
8
Reaction as Transport for London pauses See their Side ad campaign following backlash