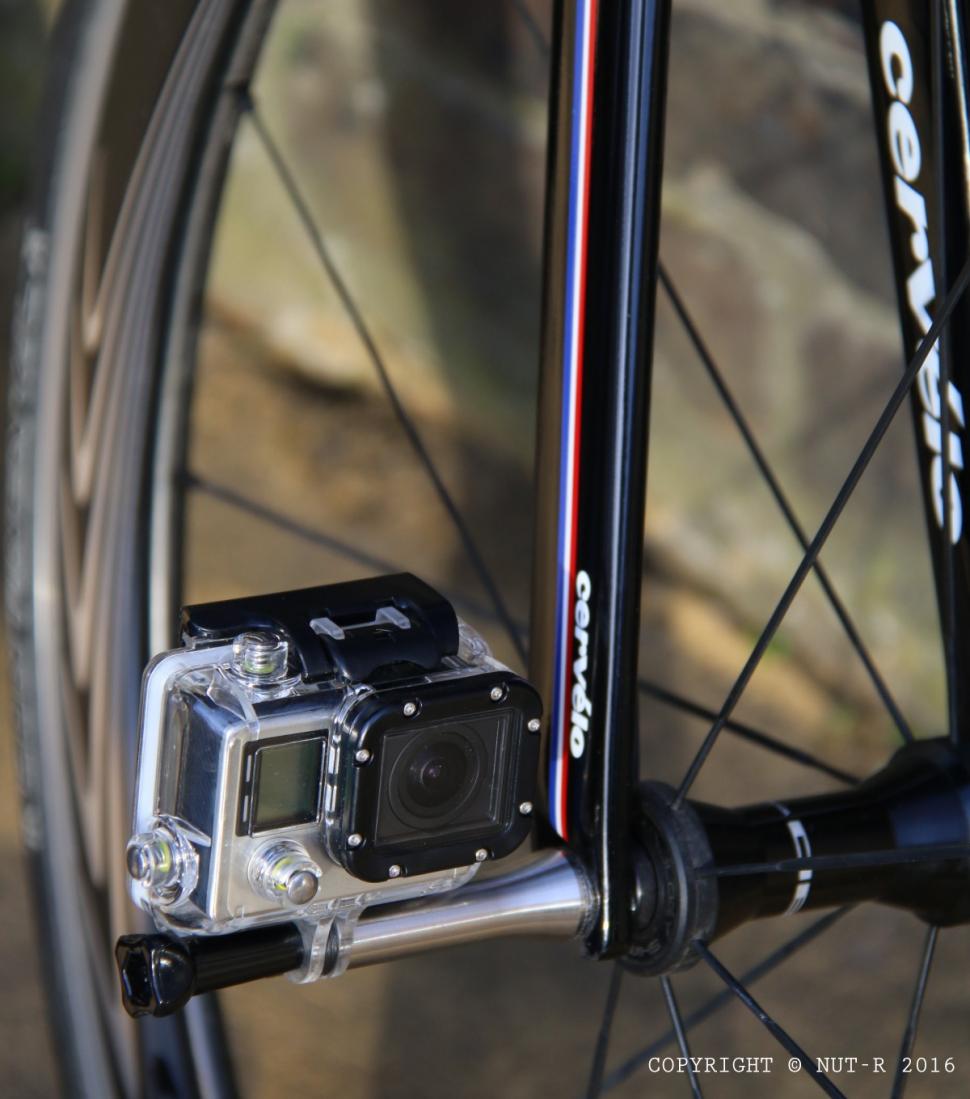 A new mount called the NUT-R allows you to position an action camera like a GoPro or a Garmin VIRB level with your bike’s front wheel axle.

“The camera mount is very simple in design but the footage it offers is superb,” said Greig Petrie, the owner of NUT-R and the engineer behind the camera mount. “I couldn't have hoped for better results when we made the decision to pursue this project.”

Greig says that the reason for mounting the camera on the wheel axle was that he was disappointed with the racing footage he had recorded from handlebar and seatpost mounts.

“The footage just never seemed to replicate the actual speed and danger you feel whilst racing wheel to wheel,” he said. “I feel that mounting the camera lower to the ground overcomes this problem and even amateur riders can create epic videos.

“In terms of the public reception to the camera mount and the brand, we seem to be going from success to success. Everyone loves the footage that it offers and those that already have the mounts are loving them.”

The stainless steel mount fits to the end of a quick release skewer, as found on most (but not all) road and mountain bikes, and is said to weigh 70g. You remove the existing nut, put the Nut-R camera mount in its place, then lock the quick release as you would normally. It will fit to either a front or rear wheel skewer although it’s not compatible with a thru axle system.

“Great emphasis has been made to test and qualify the mount to ensure it provides the utmost safety and long-term reliability,” said Greig. “In addition to the mount passing industry standard qualification testing, each mount also gets inspected and mechanically tested prior to shipping.”

It’ll take GoPro 1, 2, 3 and 4, Garmin VIRB and Shimano CM-1000 cameras, plus any others that use the GoPro mounting system.

We’ve not used the Nut-R but we wonder whether the fact that it is positioned to the side of your bike rather than in the centre makes your camera more vulnerable to damage in the event of a crash. We’d be interested to try it out to see if that really is the case.

Greig says that the brand is about three weeks away from selling the mounts and fulfilling its provisional order backlog. Sales will be through www.nut-r.co.uk initially. The site is work in progress.