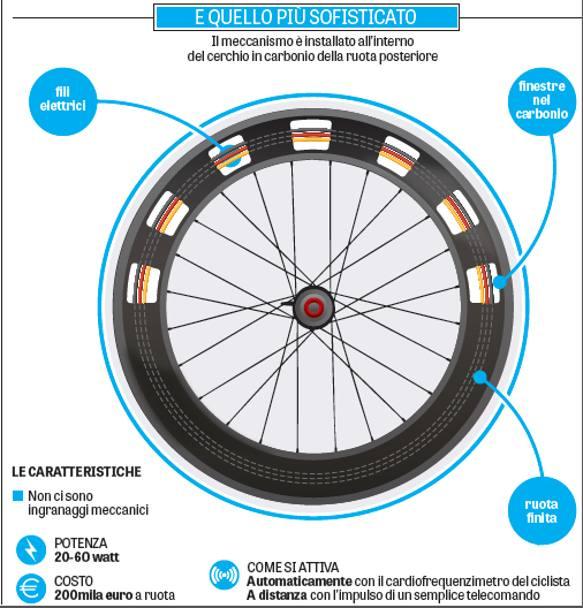 Gazzetta dello Sport reckons €200,000 electromagnetic rear wheels are now where it's at in mechanical doping, we're not so sure
by David Arthur @davearthur

Are cyclists using €200,000 electromagnetic rear wheels to provide 20 to 60 watts of extra power?

Since the UCI revealed the finding of a hidden motor inside a bike at the cyclo-cross World Championships last weekend, the internet has gone into a frenzy of speculation. Italian newspaper Gazzetta dello Sport has reported claims that the concealed motor found at the weekend is already old hat with the advent of an electromagnetic rear wheel.

- Mechanical doping: All you need to know about concealed motors

As yet the UCI hasn’t released any details of the hidden motor found at the world champs, leaving us to speculate on what the hidden motor is. We’ve assumed, and it seems most likely, that they have found a system where the motor is hidden inside the frame (in the down tube or top tube) and powers the cranks via the bottom bracket axle. That seems a fair assumption given the reports that mention wires where they shouldn't have been and the difficulty of removing the bike's cranks.

You can even buy (for a decent wedge of money) an off-the-shelf system, such as the well known Vivax Assist, which you can pretty much plug into any compatible road bike.

The article adds that such technology costs a whacking €200,000 and delivery times are six months. The system is encased in the rim and works best in a deep-section carbon fibre rim, according to the story.

The Gazzetta dello Sport doesn’t go into much detail about how these electromagnetic wheels really work. It does provide an illustration (pictured top), which doesn't really help much either.

What we think Gazzetta is pointing towards is electromagnetic propulsion, the concept of propelling an object forward, in this case, a bicycle wheel, by using opposing magnetic fields created by electrical currents.

While in theory it might make some sense, and it works for Maglev trains, in reality it doesn't sound very plausible to us. For a start you'd need two sets of magnets, in the rim and also in the frame, to oppose each other, requiring modification of the frame, and that would be very visible. You'd need some fair sized magnets and a considerable power source to make it all work.

And where would the batteries be concealed and how long would the system last? And just how much weight would it add to a standard wheel? And how much power does such a system, if it worked, offer? Lots of questions, but few answers.

“The available power is much less, from 20 to 60 watts, but enough to turn a professional mid-level in a phenomenon,” says Gazzetta dello Sport’s Claudio Ghisalberti, citing an undisclosed source.

The article also suggests that there is a  division between the requirements of professionals and amateurs.

“In the first case, you don’t need too much power or too much torque: 50-60 watts are more than enough. In the second, however, you need a lot of torque and a lot of power. The performance of these motors is better with a high pedalling cadence.”

So amateur cyclists using the currently available mechanical motors? The article suggests there has been a lot of interest in Vivax Assist style devices that can be retrofitted to regular carbon fibre road bikes.

“I alone have sold 1,200 of them in Italy. When I read results of Gran Fondos, I start laughing, I could rewrite almost all of them.”

Is Gazzetta dello Sport barking up the wrong tree, or is there any merit in the theory?