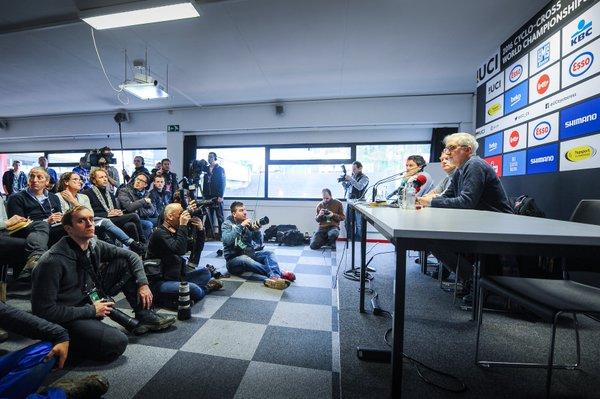 Head of the UCI (Union Cycliste Internationale) Brian Cookson has this morning made a strong statement warning mechanical dopers that they will be caught and dealt with in the light of the suspected motor found inside Femke Van den Driessche’s bike at the Cyclo-cross World Championships.

Last night we reported that a bike belonging to the Belgian riding in the women’s U23 race had been detained for further investigation, the UCI looking into the possibility of technological fraud.

Since then it has become clear that the suspicion is that the bike was equipped with some form of motor.

Brian Cookson has this morning Tweeted, “Technological fraud is unacceptable. We want the minority who may consider cheating to know that, increasingly, there is no place to hide, and sooner or later they will pay for the damage they’re causing to our sport.”

As if it was ever in doubt, the UCI's technical regulations state, "The bicycle shall be propelled solely, through a chainset, by the legs (inferior muscular chain) moving in a circular movement, without electric or other assistance.”

Cookson also said, "Throughout the 2015 season, we carried out unannounced bike checks at major road events and we will conduct similar controls throughout the 2016 season.

"We have introduced in 2015 a set of Regulations that enables us to take action.

"We’ve been trialling new methods of detection but you’ll understand why I don’t want to go into details of those methods."

Many people were perplexed when the UCI began checking bike frames for means of mechanical assistance, but it now looks like that approach has been vindicated.

If suspicions prove to be true, does this mark a new low in a long, long history of cheating in cycling? Let us know what you think below.