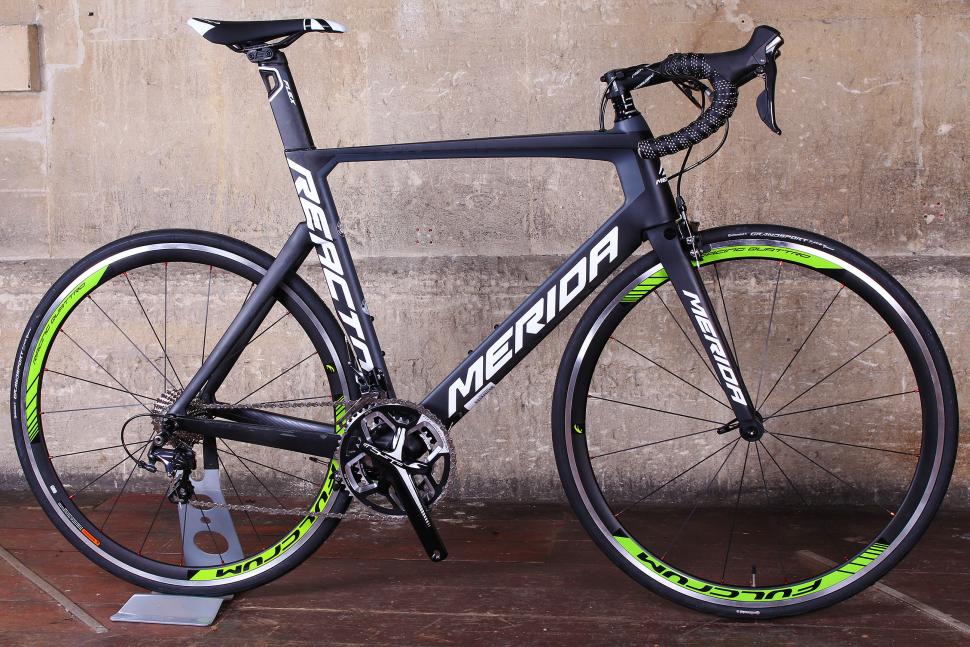 A carbon-fibre aero road bike with Shimano Ultegra components for £2,000
by Mat Brett

We’re all familiar with aero road bikes these days, right? The reasoning goes that saving weight on a frameset is an overrated factor that’s only really significant when you’re accelerating or climbing a very steep hill. At other times, aerodynamic efficiency is much more important.

With that in mind, the Reacto 5000 is built using Merida’s Fastback tube profiles which are based on the NACA (National Advisory Committee for Aeronautics) 0028 airfoil. 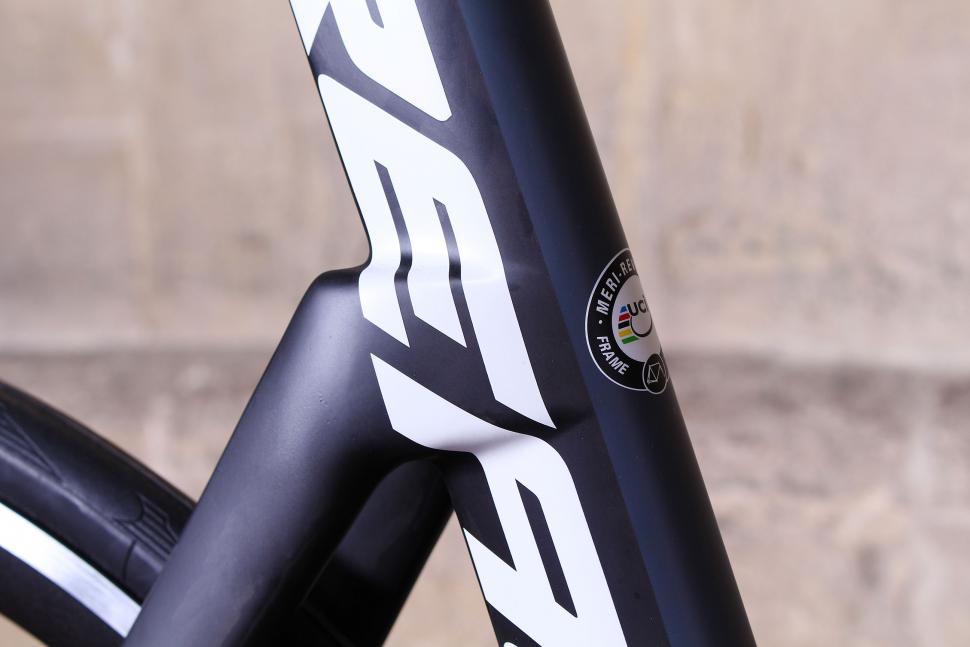 The tail of the profile is cut away in such a way as to keep the airflow stable without causing turbulence. This lowers the weight and allows Merida to stay within the UCI’s rules on tube dimensions. Other brands do similar things with their aerodynamic shaping.

The seatstays meet the seat tube much lower than the top tube junction, reducing the frontal area, and they're positioned well out from the rear wheel to manage airflow back there. 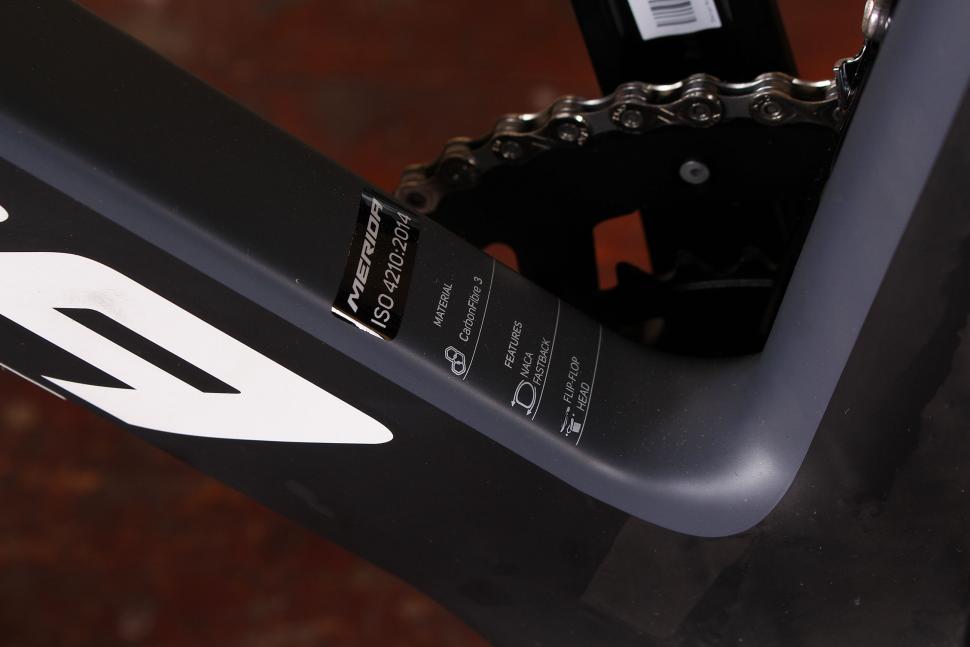 The legs of Merida’s full-carbon Pro-Direct fork are widely spaced too, and the crown is integrated into the frame. In other words, it sits in a notch at the bottom of the head tube so as not to increase the size of the bike’s silhouette. The front brake is direct mount, positioned at the front of the fork rather than behind it. Merida says that the aero advantage to be gained by sheltering the brake around the back of the fork legs is minimal. 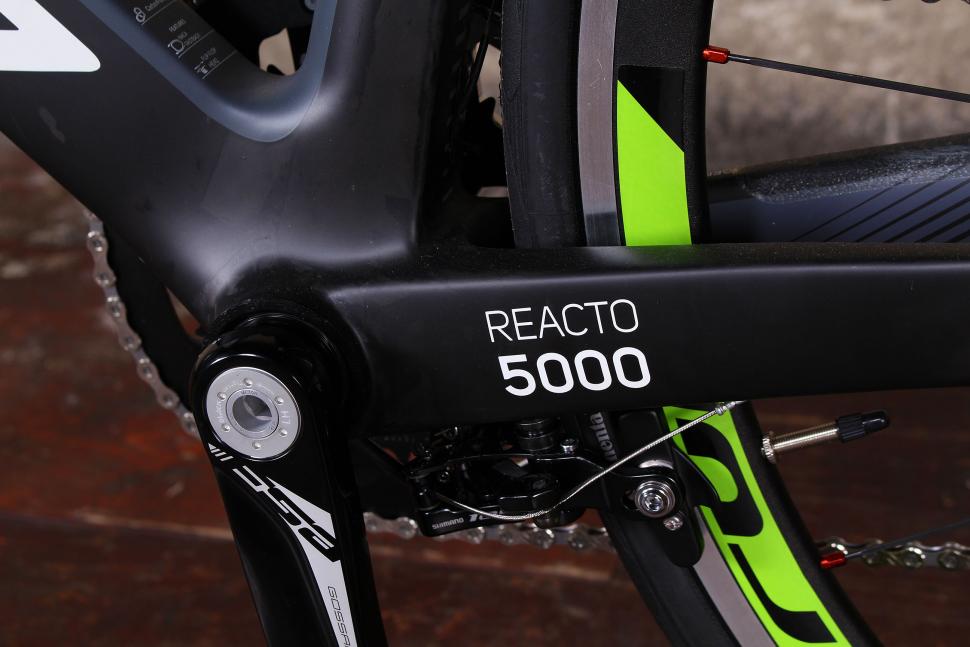 The rear brake is direct mount too, hidden away on the underside of the chainstays. This allows Merida to do away with a brake bridge between the seatstays, keeping things clean in that area for more aero efficiency. The downside is that brakes positioned down there invariably get dirty in wet conditions because they’re right in the firing line of spray from the road. 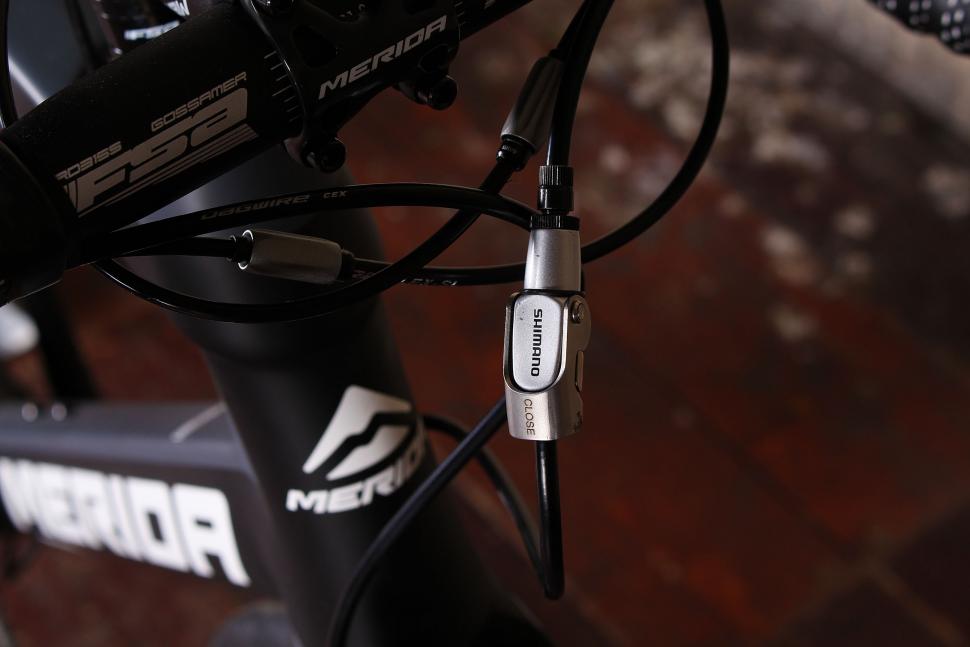 The seat tube is cutaway around the leading edge of the rear wheel in a time trial bike style and the carbon-fibre seatpost that slots in at the top mimics its aero profile. Interestingly, that seatpost features what Merida calls its S-Flex technology. The post thins out just below the head, the gap filled with a soft rubber insert. The idea is that this adds flexibility over rough surfaces to reduce ‘muscular exhaustion’. Merida reckons it acts like a standard 27.2mm diameter post. 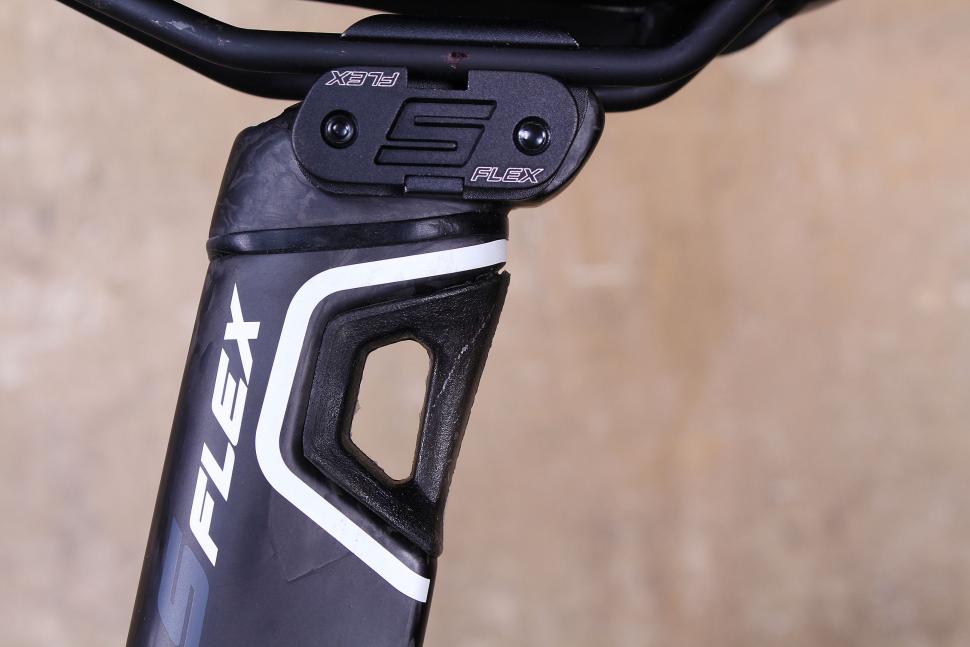 The post’s other clever feature is the flip-flop head – you can spin it to effectively alter your seat angle. You’re probably not going to want to make use of that for normal road use, but it might come in handy if you fit clip-on aero bars for a time trial or triathlon.

The seat clamp is integrated – it’s a wedge design – and the cables run internally, tunnelling into the frame via the top tube.

Although this is a race bike, the geometry isn’t extreme. We have the 56cm model for review which comes with a 575mm top tube and a 184mm head tube. The stack (the vertical distance between the centre of the bottom bracket and the top of the head tube) is 578mm and the reach (the horizontal distance between those two points) is 398mm. That’s certainly a setup designed for efficiency, but the front end isn’t radically low. 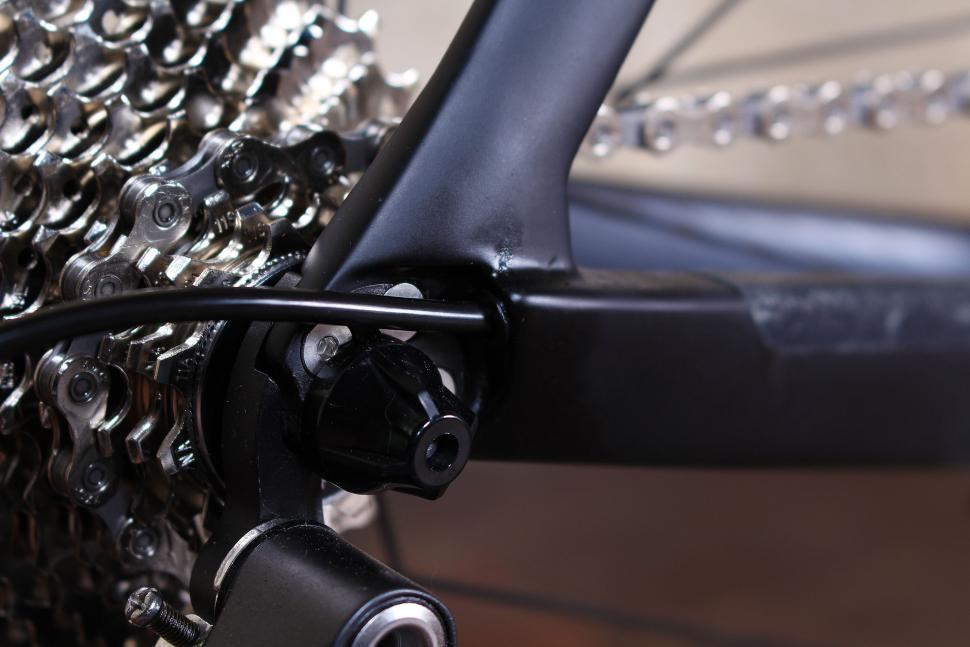 The Reacto is available in several different models. The lower end ones are aluminium, kicking off with the Reacto 300 that we reviewed here on road.cc last year http://road.cc/content/review/149582-merida-reacto-300-road-bike. It was priced £999.99 at the time although the price has now dropped by £100. We were very impressed with the performance so this bike is looking even more of a bargain now. 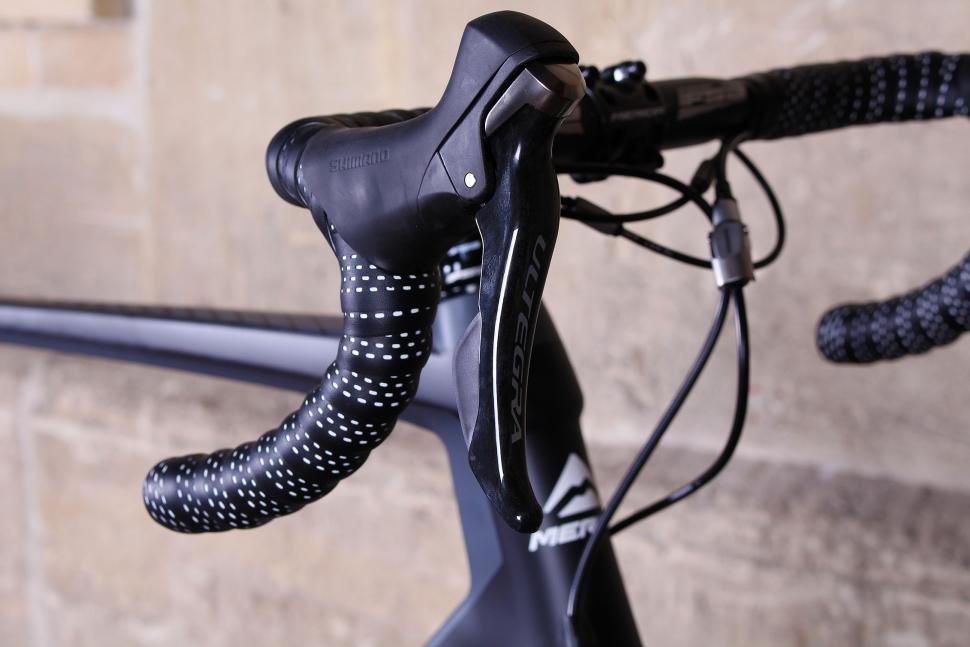 From there on up the Reactos are carbon-fibre, starting with the £1,700 Reacto 4000 which features 105 shifters and derailleurs and going right up to the £7,000 Reacto Team. This one has a superlight version of the frame, Shimano Dura-Ace Di2 (electronic) shifters and derailleurs, Fulcrum Quattro 35 carbon wheels and a Rotor Flow noQ chainset. As the name suggests, this build is based on that of the Lampre-Merida professional squad. The Reacto 5000 comes fitted with Shimano Ultegra shifters and derailleurs and an FSA Gossamer Pro chainset. It’s a semi-compact (or ‘faux pro’, or whatever else we’re calling it these days) model with 52/39-tooth chainrings teamed up with an 11-28-tooth cassette.

The direct mount brakes I mentioned are Shimano 105 while the wheels are Fulcrum Racing Quattros fitted with Continental Grand Sport Race tyres in a 25mm width. The Reacto 5000 has many rivals at the £2,000 price point. The Specialized Tarmac Comp that we reviewed last year http://road.cc/content/review/144752-specialized-tarmac-comp-road-bike (Merida owns a big stake in Specialized, by the way) was £2,000 as well, and it remains that price for 2016. 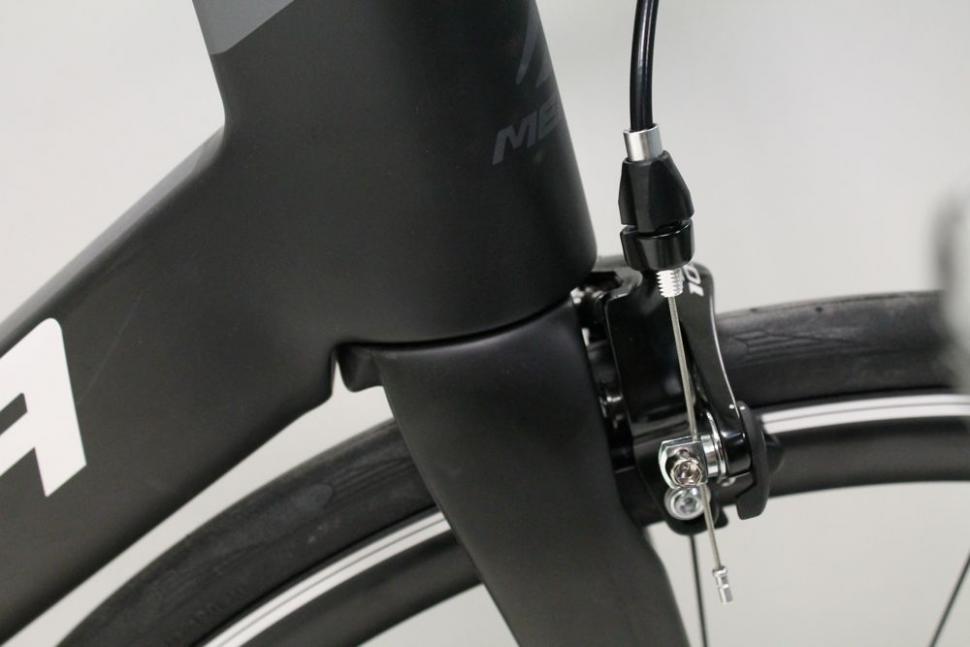 That bike has a mostly Shimano Ultegra build and it offers a sparkling ride, although it’s not designed with aerodynamics in mind.

The £2,299 Look 765 that we reviewed recently http://road.cc/content/review/170869-look-765-full-shimano-ultegra also impressed us. That bike is also built up with Shimano Ultegra although it’s an endurance model rather than a race machine.

I’m going to get the Reacto 5000 set up and out on the road, and will be back with a review soon. In the meantime, get more info from http://www.merida-bikes.com/en_gb.