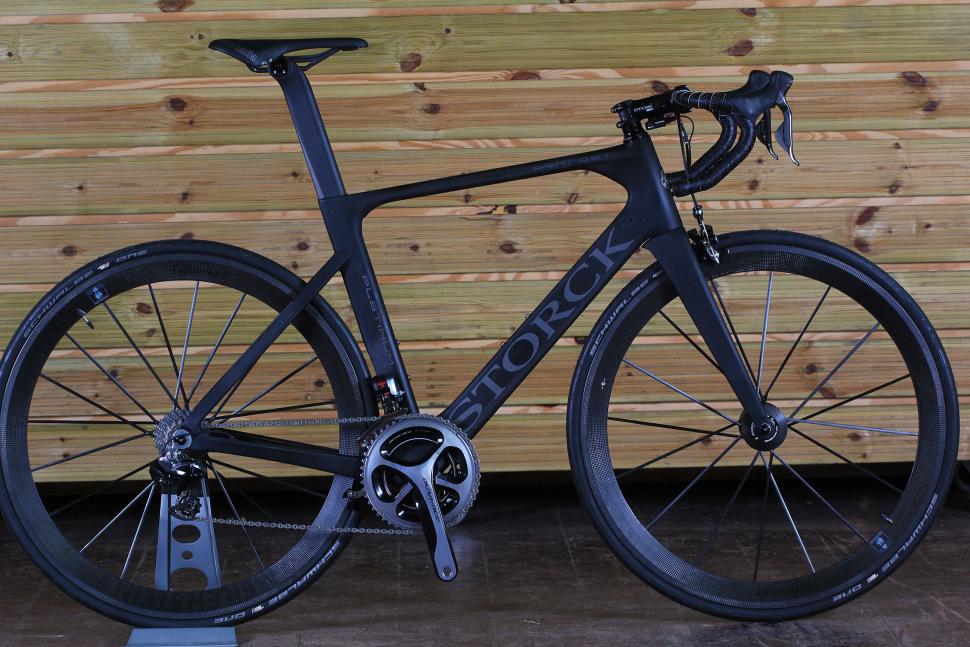 The first Storck Aerfast Platinum in the UK is here at road.cc for review. In the build we have here it’s priced at over 10 grand, although standard builds start at half that, and the Aerfast Comp (see below) costs from around £2,500 complete! Even if you don’t have that kind of money kicking about this is an interesting bike that’s well worth a look. 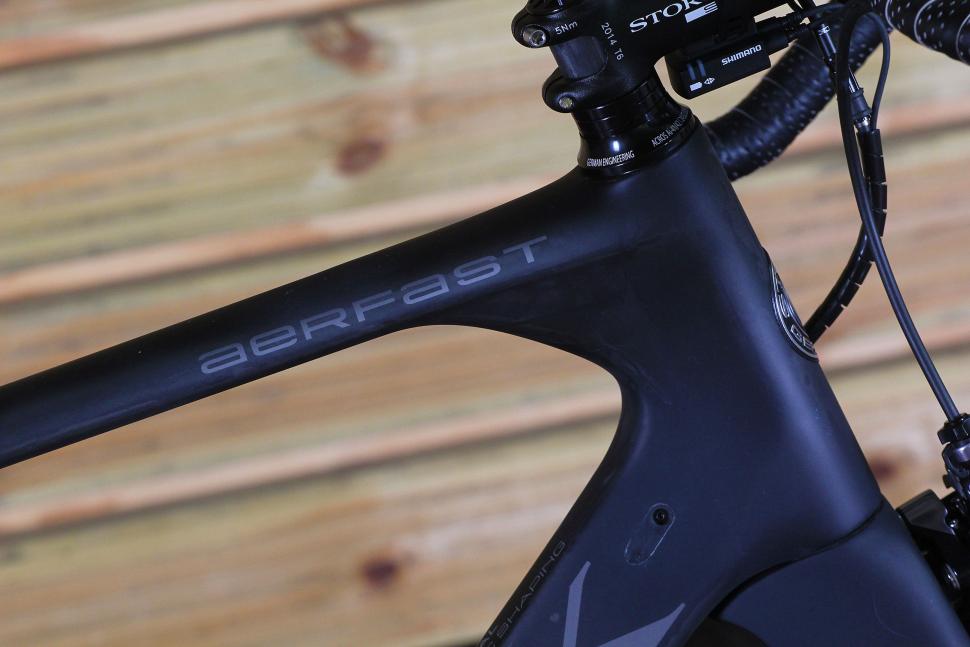 We first told saw the Aerfast at Eurobike earlier in the year. Check out our initial report here.

The Aerfast has been designed by Markus Storck to combine aerodynamic efficiency with a lightweight.

The frame and fork are designed according to what Storck calls ‘sectional aerodynamic shaping’. Each element of the frame is designed to have a natural drop shape when a cross section is taken parallel to the ground. 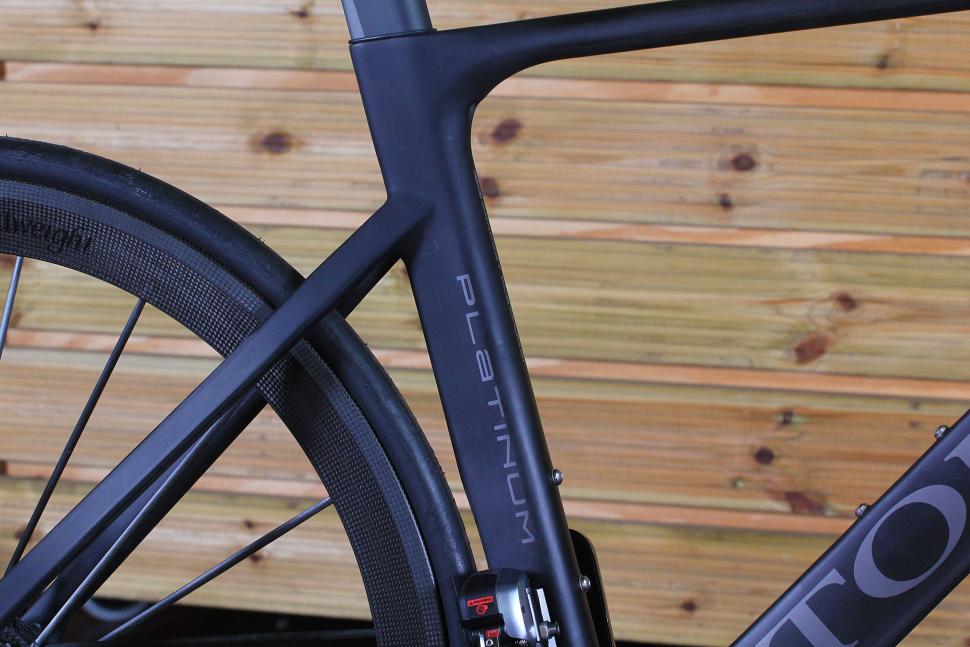 This is most obvious in the seat tube because, being so close to the vertical, it’s easy to see. The top tube slopes downwards very slightly, and it too is designed to have a drop shape profile if you were to slice it parallel to the ground. The same is true of everything else right down to the bottom bracket. 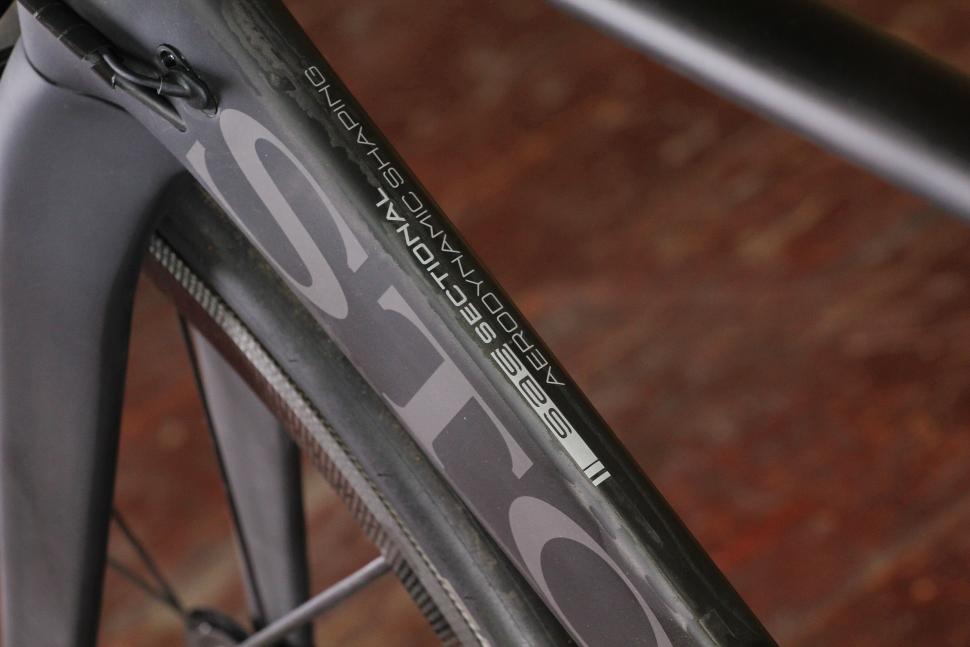 The down tube is interesting in that the walls are slightly concave and the central section is narrower than the top and bottom to manage the airflow from the front wheel. Rear-facing rear dropouts allow you to adjust the position of the wheel in relation to the cutaway seat tube. 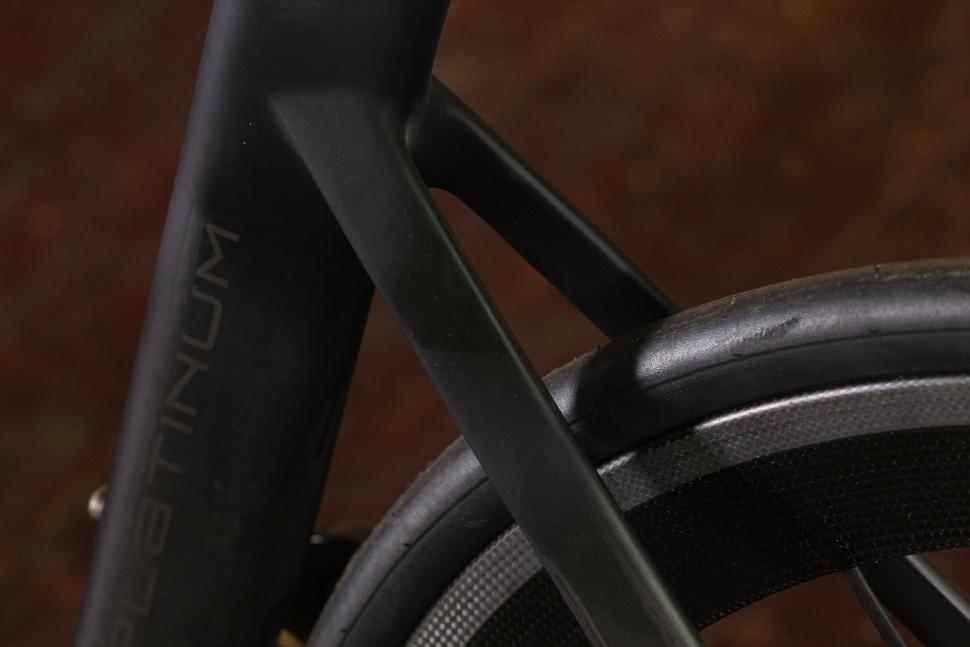 The rear brake is hidden away behind the bottom bracket so there’s no need for a brake bridge... ...and this allows Storck more of a free rein to design aerodynamic seatstays. Other frame features include a tapered head tube (1 1/8in to 1 1/4in), internal cable routing and an integrated seat clamp with the bolt hidden away underneath the top tube, as is typical with Storck.

The seatpost is aero-section although the Aerfast will take a standard round 31.6mm seat post if you want to fit one. 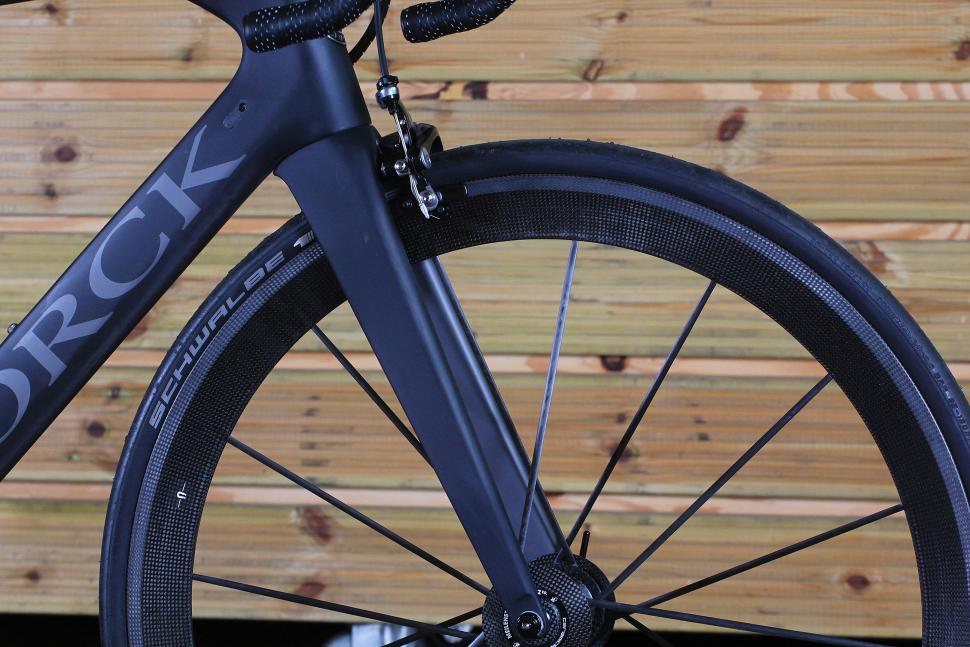 Storck is moving over to a structure of offering its bikes/framesets at three different levels. They all come out of the same mould but the grade of carbon and the layup used changes. 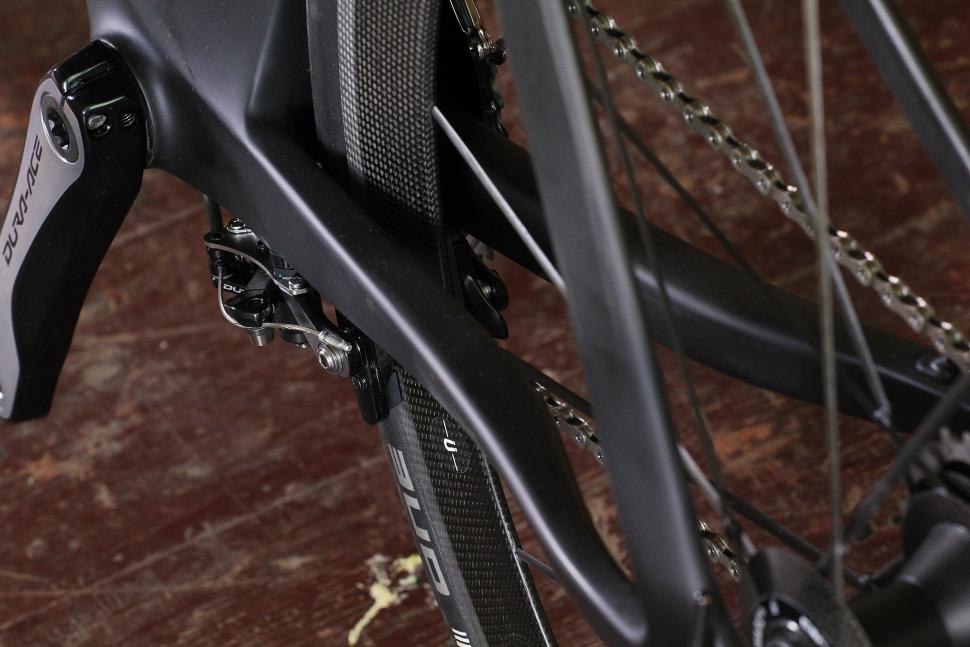 When we spoke to Markus Storck at Eurobike he said that any lighter would have resulted in too much of a stiffness loss. The Aerfast is 20% less rigid than the Storck Aernario and he didn’t want to go any lower than that. 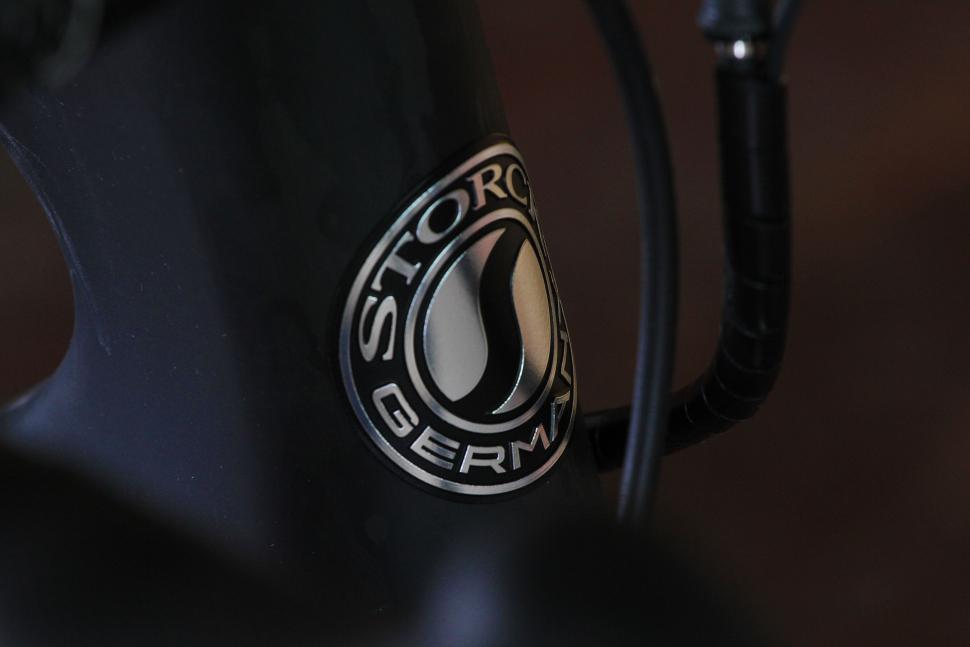 As we have the first Aerfast Platinum frame in the UK, Storck wanted it to be a bit special. As mentioned above, a complete Aerfast Platinum is available for £4,949. That’s in a Shimano Ultegra mechanical build. Our bike, though, has come with Shimano’s top-level Dura-Ace Di2 groupset and Lightweight Meilenstein Obermayer clinchers (we reviewed Lightweight Meilenstein tubulars here on road.cc recently). 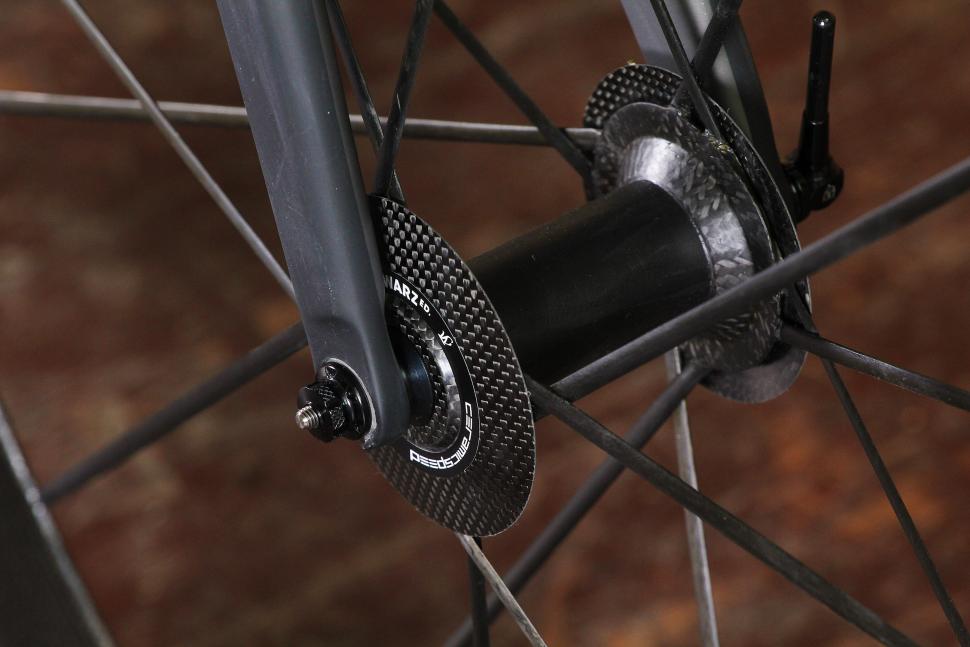 We have a medium sized model for test and the road.cc Scales of Truth say that it weighs just 6.47kg (14.3lb). That’s comfortably below the minimum weight limit for UCI-sanctioned racing, which is pretty amazing for an aero bike. The only aero road bike approaching that kind of money that we’ve reviewed here on  road.cc recently is the Trek Madone 9 Series Project One at £9,750.That’s a fabulous bike with many aero features and an IsoSpeed decoupler that allows seatpost/saddle movement for increased comfort. Like the Storck Aerfast, our version was built up with a Dura-Ace Di2 groupset. 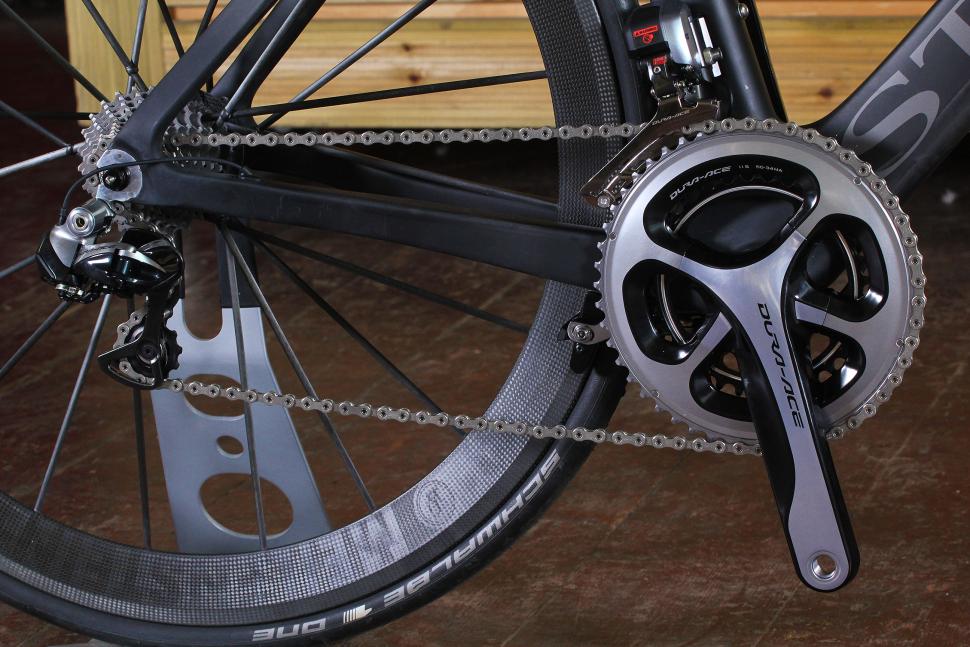 Stu has been hooning around on the Storck for a while now so you can expect a review here on road.cc soon.

In the meantime, get more info from www.storck-bicycle.cc.