Charging bicycle light batteries can be a pain, so wouldn’t it be great if you could ditch the batteries completely? Well Danish company Reelight has launched a battery-free cycle light on Kickstarter that pumps out up to 118 lumens and is totally frictionless.

Reelight has been working on the concept of a bicycle light powered by nothing more than the rotating wheels in your bicycle. Way back in 2010 road.cc reviewed a product that used a system of magnets to power the lights, but it wasn’t without its problems.

For this latest design, Reelights has developed a product that makes no contact with the wheel rim. Reelight says it has developed a patent pending technology that “takes advantage of Eddy currents ( loops of electric current induced within conductors by a changing magnetic field in the conductor) generated by the rotation of the bike’s aluminium rim,” so there’s no speed-robbing friction. 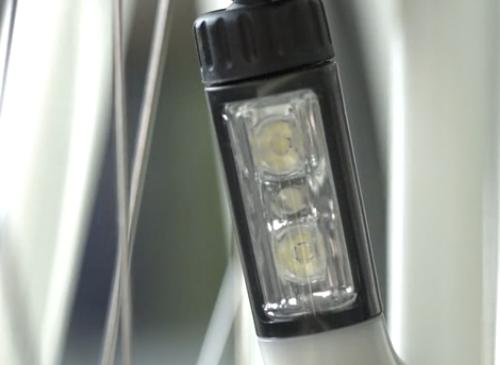 Reelights has developed a generator which uses the magnetic field of the Eddy currents to propel six neodymium magnets, which supplies the LED with power. The design produces sufficient power to run to 1W LED lights. It has tuned the beam, with a concentrated front light beam and an extra wide angle rear light.

What happens when stop pedalling though, say pulling up to some traffic lights? Reelights has thought of that, and each light has a backup system which supplies low power LEDs to maintain visibility to other road users.

According to the company, the light, which are a fully integrated design, can be fitted easily to most bicycles in under 30 seconds with no tools needed, other than an Allen tool to make use of the anti-theft protection. The Reelight Neo is currently on Kickstarter where the company is hoping to raise $60,000 of funding. At the time of writing, it has surpassed the halfway point with 33 days to go. To get your hands on a light will cost just $18, with a choice of colours to choose from. That’s 70% off the estimated $60 RRP when the lights go into full production.

Check it out at www.kickstarter.com/projects/1651132789/neo-worlds-most-powerful-frictio...