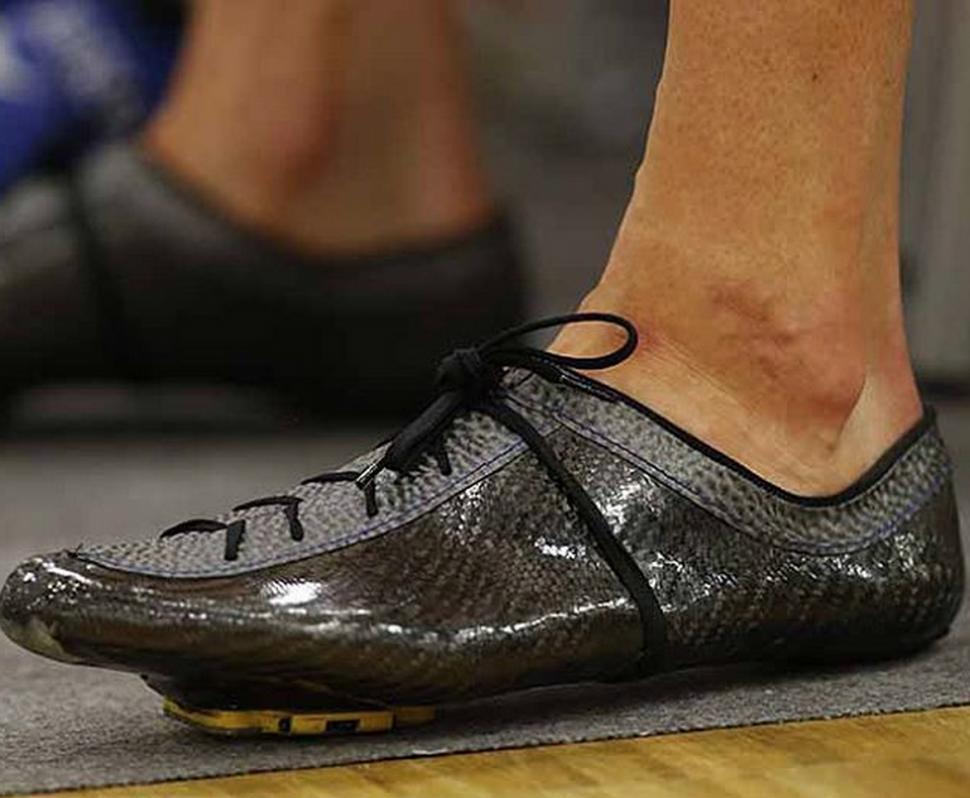 Sir Bradley Wiggins is back in action at the European Championships, but it’s his shoes that have been getting nearly as much attention as his times on the boards.

Wiggo has changed shoes over the years. Nothing really unusual about that, most professional cyclists change shoes throughout their careers, either due to sponsorship demands or fit issues. Bradley used to ride Bont's carbon mouldable shoes, then more recently switched to Giro’s Empire lace-up shoe - he wore a gold pair for his successful Hour Record attempt.

While the Bont and Giro shoes are off-the-shelf products, that you or I can buy from any decent bike shop, his current race shoes are anything but. We'll admit to not knowing the full story about the shoes, we just spotted them on this Instagram page today.

They remind us of Adam Hansen’s own carbon fibre shoes, which the Australian professional cyclist makes himself. These look similar, but the shoes we’ve seen Adam wearing have unique carbon cover flap and lace retention system with a rotary dial.

Wiggo's shoes instead have a simpler lace-up design, similar to the Giro Empire shoes he was using recently. So they could be a special pair of custom shoes created by Adam, with a few modifications, or they could be created by someone else.

There are a few small companies that specialise in custom carbon footwear, notably Simmons Racing, a US manufacturer of speed skating and cycling shoes.

Adam Hansen will sell you a pair of his custom shoes through his website Hanseeno. They're not cheap at €2,000, but then they do take 42+ hours to make a pair with eight moulds required. They’re extremely light, a claimed weight of under 96g makes them considerably lighter than any other shoe currently on sale.

We'll try and find out more about these shoes.