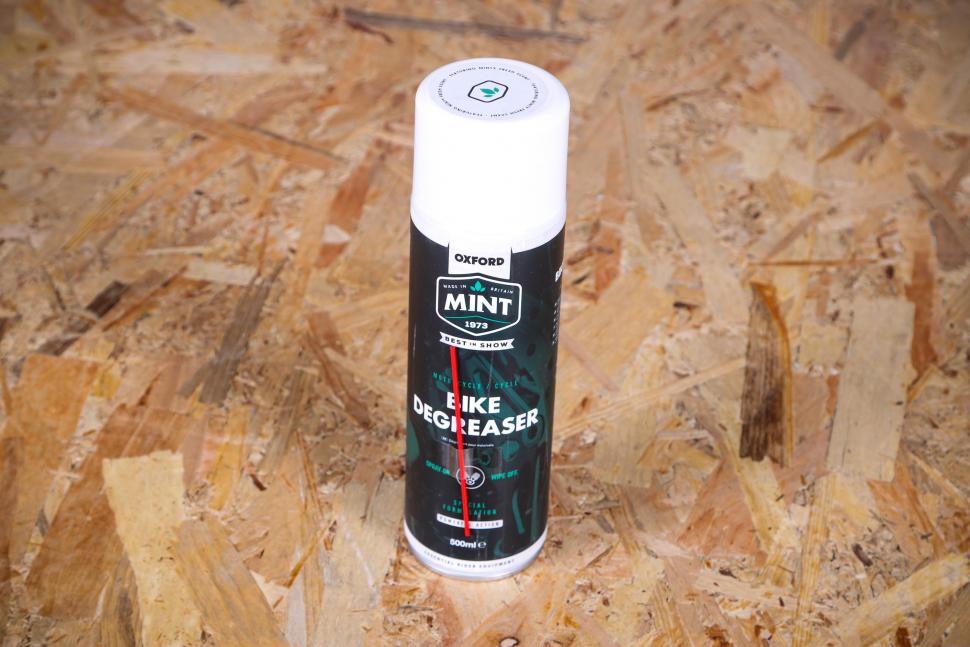 8
10
Powerful degreaser that shifts the most stubborn oily dirt, and a decent price
Powerful action
Removes built up grime efficiently
Minty smell
Contains some harsh ingredients
Not explicitly for chains or discs
Weight:
500g
Contact:
www.oxfordproducts.com
How we test

Oxford's Mint Bike Degreaser is a powerful petroleum-based degreaser for the toughest built-up oily muck on your bike. Although not especially environmentally friendly, used sparingly this degreaser is a solid product to have in your bike cleaning arsenal.

Sometimes, simple soap and water can't cut it. If you've ever tried to clean your driveside chainstay, for example, you'll know the frustration of realising that you're not washing off dirt, but smearing around dried-on black oil that's now made a real mess of your sponge.

The solution? Degreaser. Oxford's Mint Bike Degreaser is designed for anything from shifting heavy dried-on stuff to cleaning the frame and moving parts like derailleurs.

You need to be careful though – overzealous use near bearings or pivots can end up causing damage (it'll strip grease that needs to be there), while in this solvent form there are some really punchy ingredients. Kerosine (the stuff they use for jet engines) and petroleum both feature here, so this is definitely one to use a) sparingly and b) in a well-ventilated area.

Needless to say its powerful solvents are not the best things for the environment either, but the good news is you really don't need to use much. Instead of mixing the most volatile materials available, Oxford has used slower-evaporating ingredients that stick around just a little longer than your usual punchy degreasers. That means it has longer to dissolve the filth, and the residue is easy to wash away afterwards.

I found the smallest amount was really effective at cleaning up chainstays and stubborn dirt, and the supplied applicator tube lets you be precise (and keep just that bit further away from the nozzle).

Oxford doesn't explicitly recommend this for chains – it has Oxford Chain Cleaner for that – although it did a grand job of cleaning up an old cassette which was clogged up with a mix of old oil and dust. That wasn't attached to the bike though, and so wasn't near any bearings. Something like the aforementioned Oxford Chain Cleaner or Fenwick's Foaming Chain Cleaner can be used much more casually for that.

In any case, this general degreaser is powerful and effective, and washes away easily. If you do use it on moving parts, just ensure it's well rinsed off and dried before reapplying any grease.

Of course, you should always avoid breathing vapours from products like these, but the whole Oxford Mint range does feature that signature minty whiff – which for me is far more pleasant than overpowering petroleum smells! I'm aware that not everyone will agree though, especially if you grew up when carburettors were a thing...

Meanwhile, the WD-40 Bike Degreaser is notably good value at £6 for 500ml and smells of citrus instead of mint. Is it weird all these cleaners smell so drinkable? Probably.

My go-to degreasers (I first tried them years ago and have never felt the need to change since) are Fenwick's Fast Blast Degreaser and Fenwick's Foaming Chain Cleaner, which retail for £9.99 apiece.

Remember though, Oxford's Bike Degreaser isn't specified for chains and other sensitive parts, unlike the options above, so that's worth bearing (ho ho ho) in mind.

This is a powerful degreaser that will shift the most stubborn oily dirt. It's potent stuff, and not exactly eco-friendly, but a little goes a long way – and works very well.

Powerful degreaser that shifts the most stubborn oily dirt, and a decent price

Oxford says: "Mint Degreaser is a robust formulation which is effective at dissolving and washing away grease and oily residues that have built up over time. Slow evaporating solvents remain on the cleaned surface for longer, in order to protect it and make cleaning easier the next time. On application, the degreaser is more effective if allowed to soak for a few minutes before being washed off and has an emulsifying formula to help this process.

"It of course features a clean, minty scent."

- Removes built up oil and grease.

- Not tested on animals.

The application nozzle fits in cleanly.

One of the best I've come across.

Pretty much on par, and pound cheaper than my usual (Fenwicks) solvent degreaser.

It's very powerful, and good for shifting pretty much any stubborn grease and oil.

Contains some harsh ingredients, not explicitly for use on chains or disc brakes.

Meanwhile, the WD-40 Bike Degreaser is notably good value at £6 for 500ml.

Would you consider buying the product? Yes, especially if I could find it on offer

This is a very good degreaser. Not the best for the environment, but even used sparingly it can go a long way. 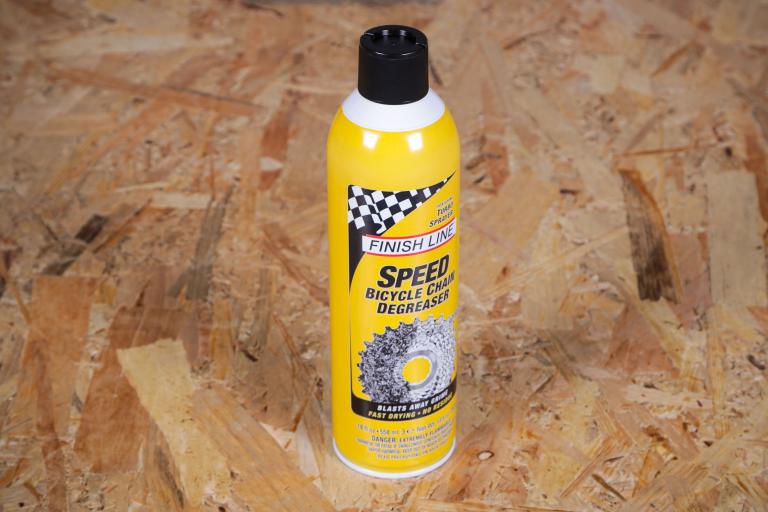 Pricier than the competition and very wasteful, but decent performance for the lazy mechanic 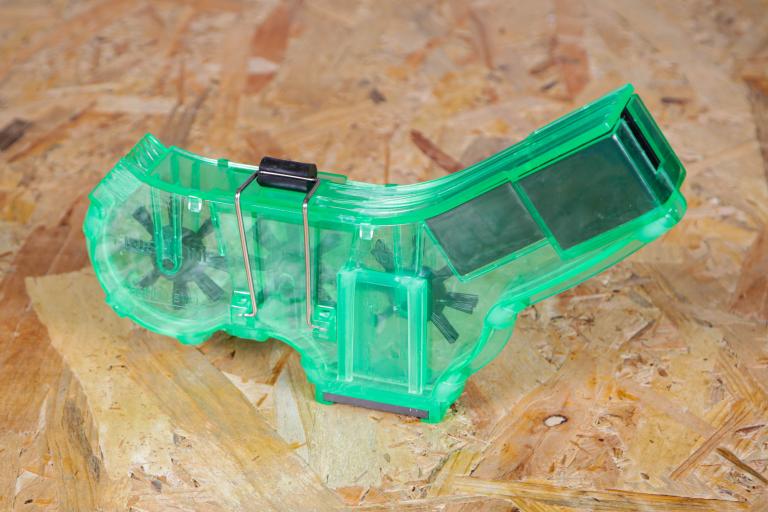 Impressive cleaning performance from a well-designed and sturdy device 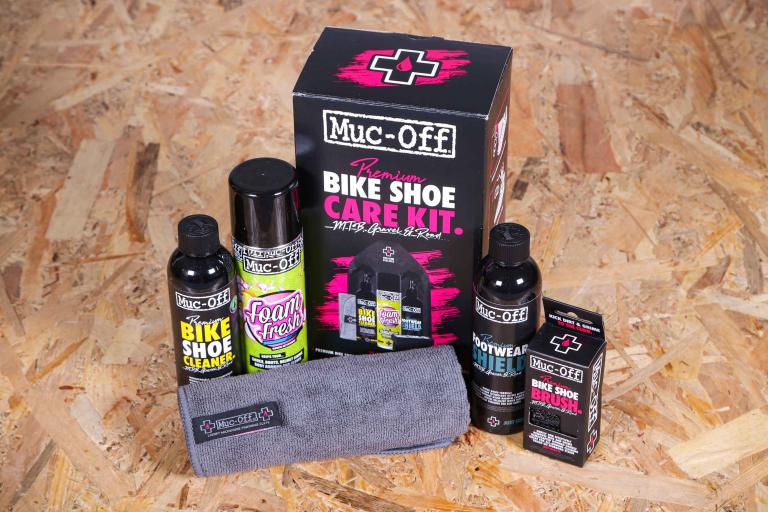 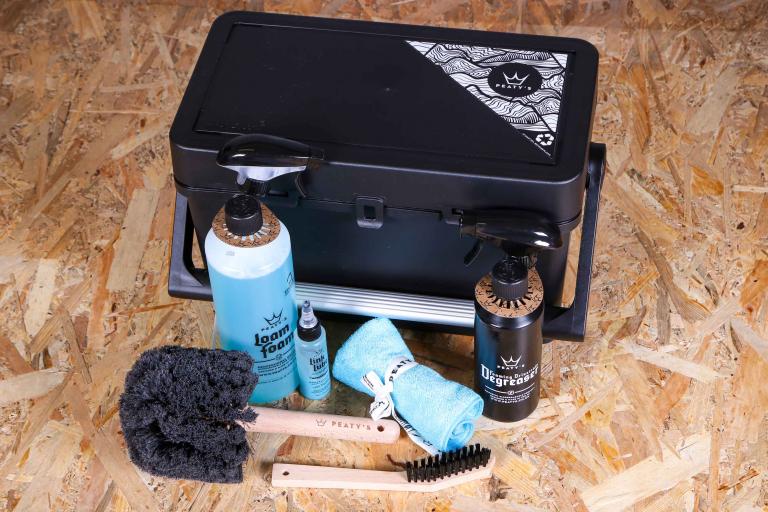 Great kit that tackles dirt and grease with ease, though could do with a small detailing brush