8
10
Capable technical jacket with decent specification and some nice touches
Good spec for the money
Nice detailing
Detachable hood
Not as breathable as some
Weight:
404g
Contact:
www.altura.co.uk

The Altura Nightvision Typhoon Waterproof Jacket is a development of the justly popular Nightvision series, which I have used on and off for many years. There are some definite improvements here – most notably when it comes to waterproofing and breathability. I have mixed feelings about hoods, at least in the saddle, but it's a solid performer for commuting and general riding.

The jacket features taped seams and boasts a waterproof/breathability rating of 15,000. A typical specification for commuter-marketed jackets is 10,000, which is by no means poor, but the difference is palpable on longer, faster commutes.

A relentlessly wet week, courtesy of storm Alex, confirmed its waterproof credentials: 2-3 hours spent battling wet, windy conditions and rain simply beaded up and rolled away, leaving me very comfortable inside. The drop tail has also saved my lower back from the lion's share of spray when riding without mudguards. Breathability is an improvement on the older Nightvisions, although obviously the layers you're wearing underneath, coupled with your own temperature sensitivity/regulation play their part. I've been able to hustle along at 17-20mph for 90 minutes without feeling clammy and uncomfortable.

That's not to say it's seamless, and after 90 minutes at full pelt the internal laminate – there's none of that 'string vest' type mesh common to more basic shells – will 'sweat' a little more than some, although it hasn't lingered and I've never felt clammy, even with the mercury hovering around the high teens. 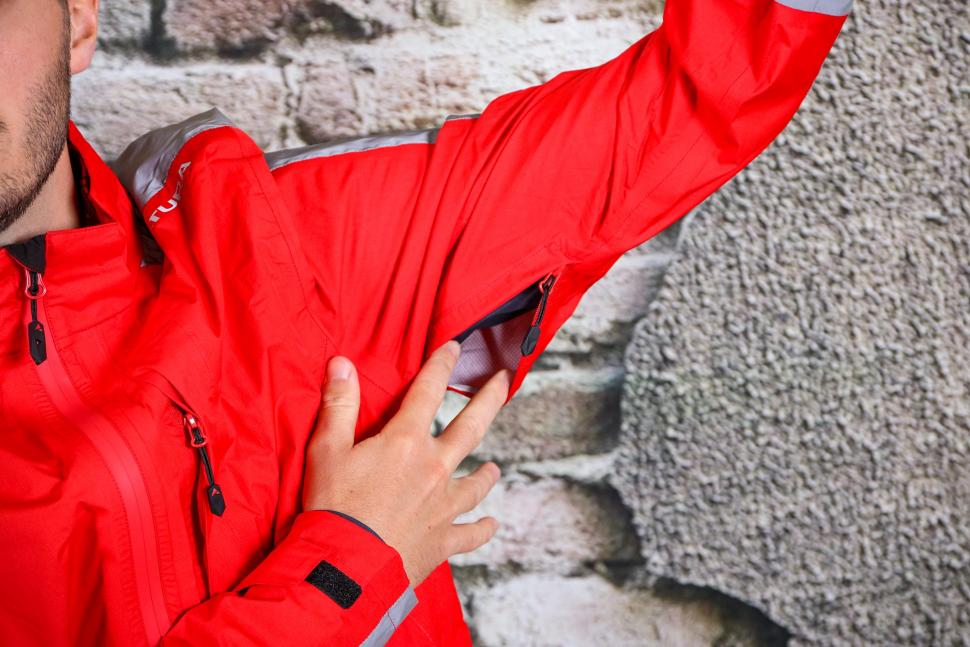 The ventilation flaps under the arms work too, channeling cooling air inside on windy, autumnal rides, and there's another vent across the back. 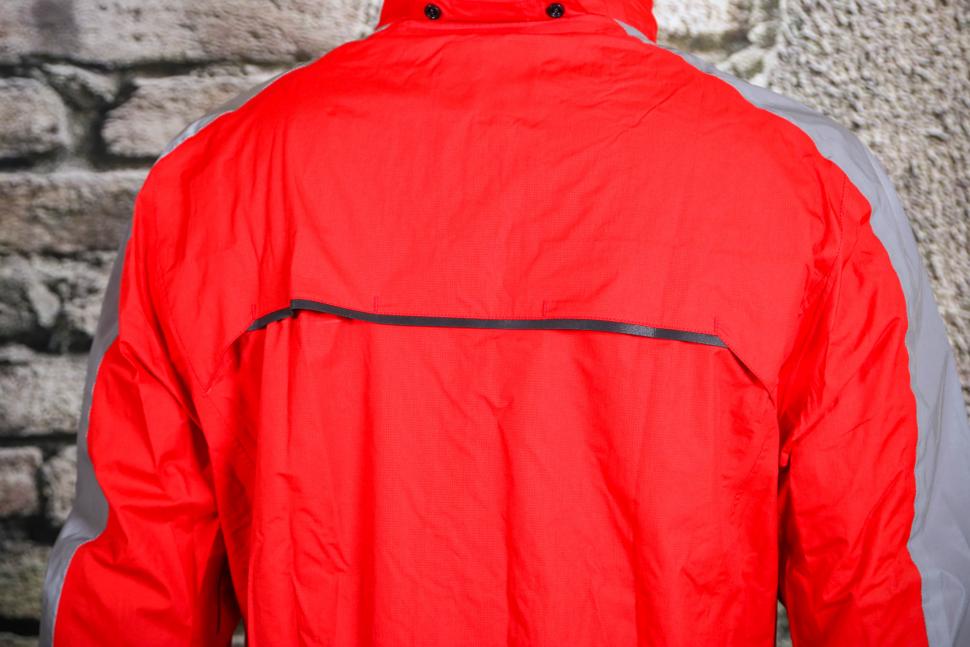 Other features include three roomy pockets, two at the hip and one on the chest. With zip closures and long, elasticated tags, everything's secure yet easily accessible when you need it. I did find the hip pockets less supportive than some, and my large bunch of keys bounced around quite a bit. I also missed not having a poacher's pocket on the rear. 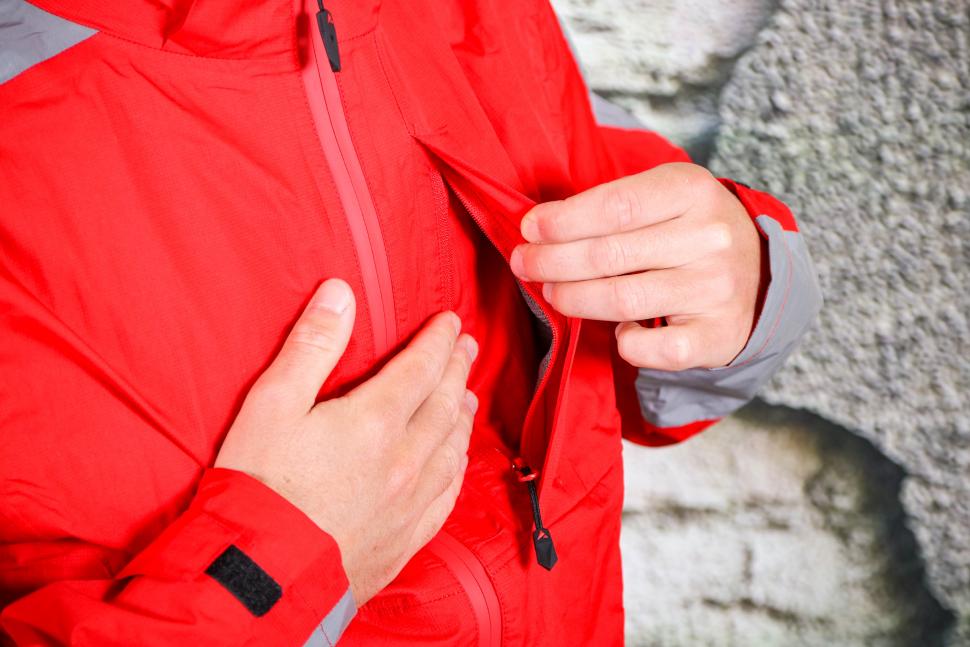 I'm no fan of hoods – usually because they impair freedom of movement/peripheral view – but here Altura has stiffened the peak, and I found that it didn't impair my ability to make quick checks over the shoulder or more involved scrutiny of junctions. I do like the fact that it's easily detachable, though, and packs small, so you can leave it off when you're riding and whip it back on when off the bike if needed. 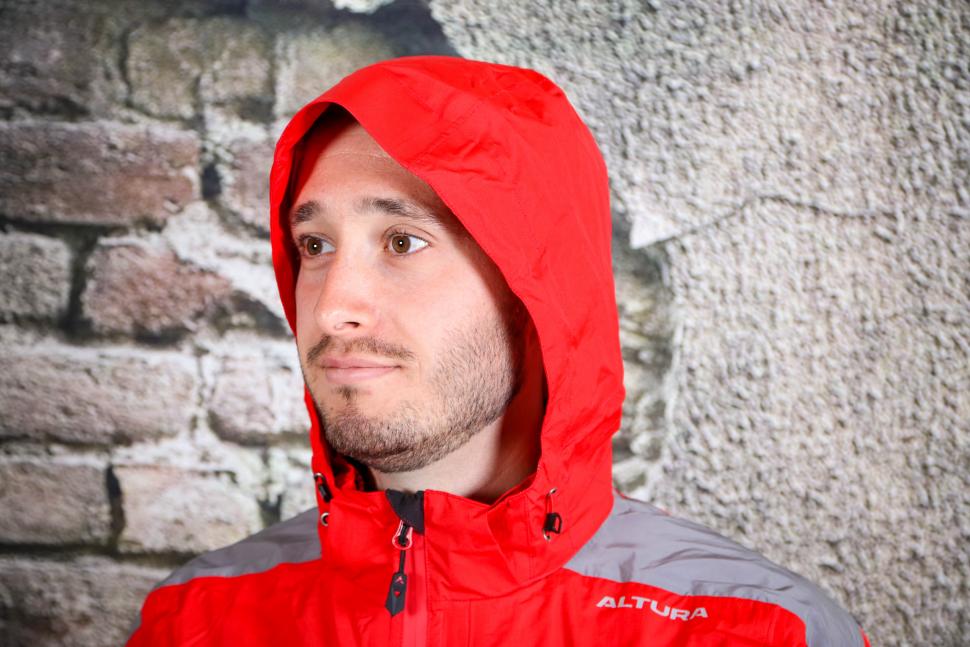 The jacket's relaxed cut means it's roomy enough for commuting in office smarts/casual street clothes, but the drawstring hem can be tweaked easily for a snug, flutter-free fit. The drop tail is a little shallower than some, so doesn't look too technical. 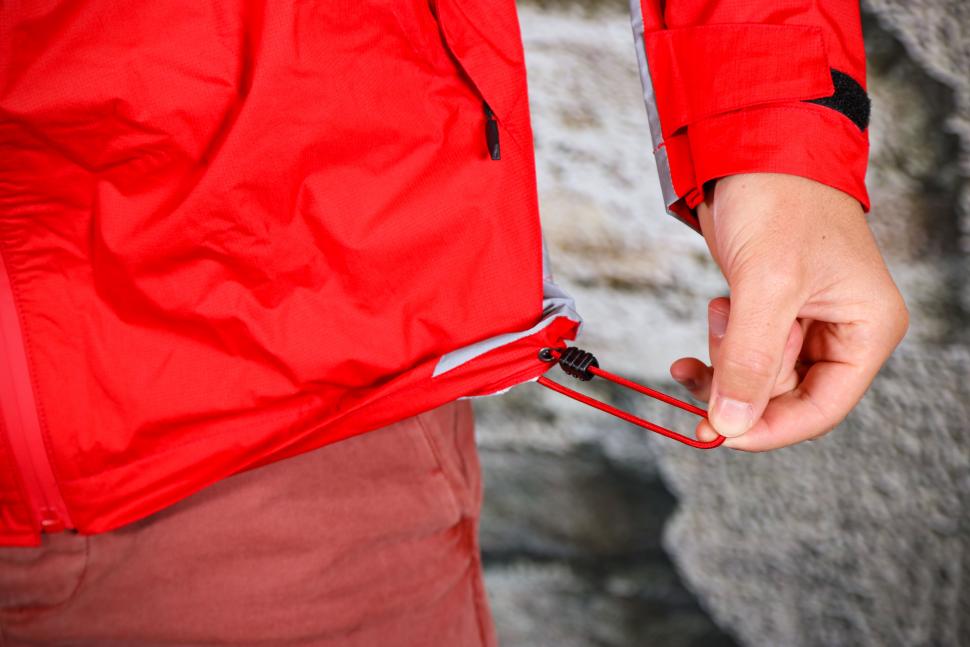 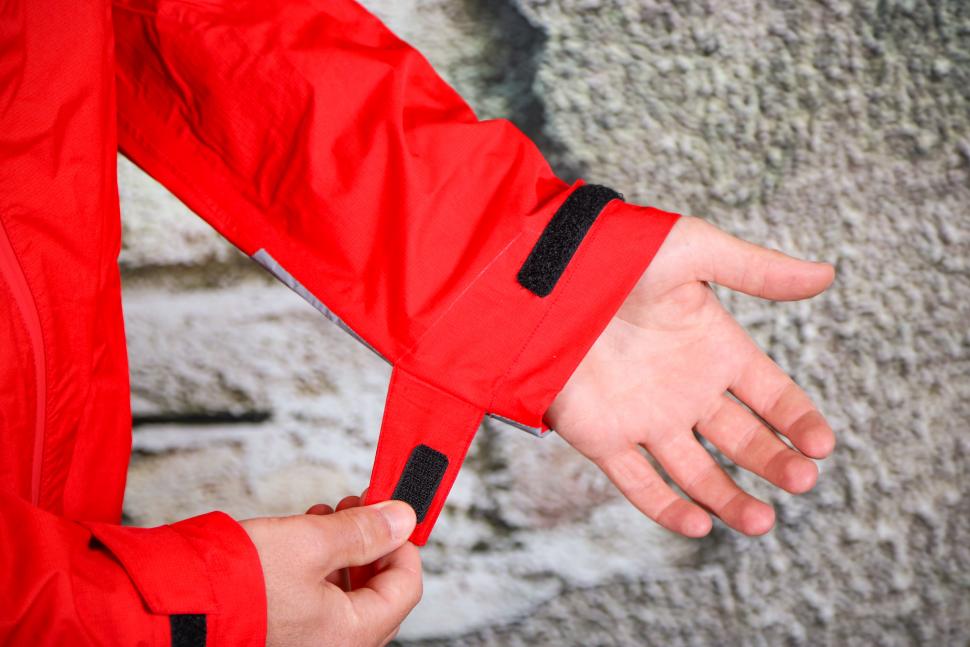 As well as the red jacket on test, there's also a silver/grey retro-reflective version, and the more commuter-typical yellow, sorry, Lime Green. Both yellow/lime green and red versions feature extensive retro-reflective panels at key points to bring the jacket 'alive' when graced by vehicle and street lighting and they're effective, doing a decent job of reinforcing signalling, especially along backroads in the wee small hours. 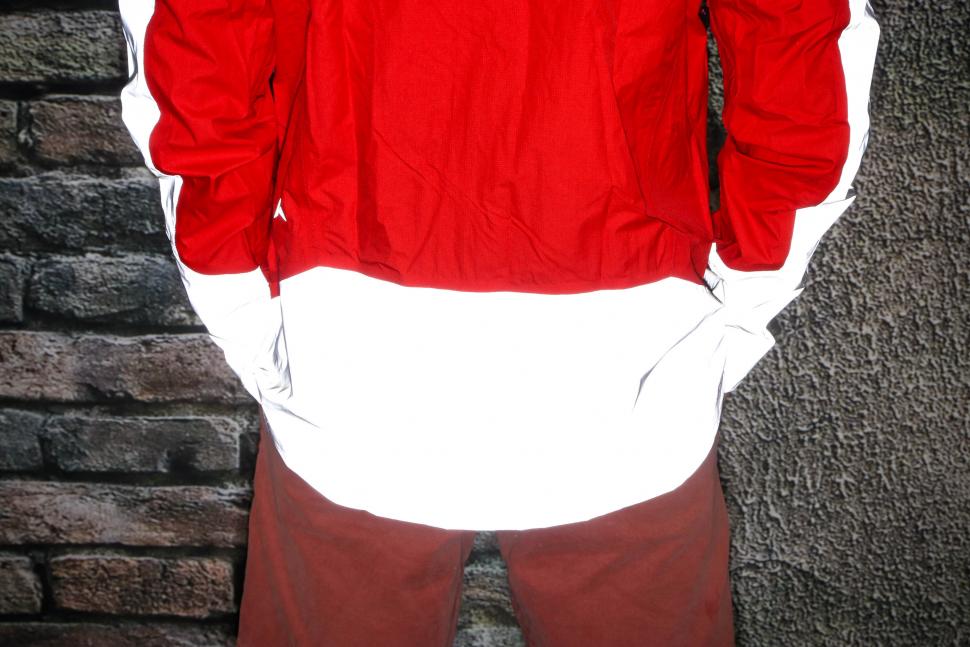 When it comes to keeping it clean, there's nothing out of the ordinary here: pop it in the wash at 30 degrees, minimum detergent, job done. Oily spatter is best treated with soap flakes first, I've found.

I'm fond of mixed terrain fun and forest cut-throughs. The inevitable collisions with thorny foliage have made no impression upon the fabric to date.

For £99.99, the Altura is competitive given the specification. It's the same price as Vulpine's Portixol, bar a penny, which has a similar spec, albeit without a hood, though arguably a more stylish look.

Rapha's Commuter jacket is also £100, but while it might have an edge in the style stakes, from the sound of things it doesn't keep pace with the Altura Typhoon's breathability and overall comfort.

All three are £60 less than Showers Pass's Transit.

When all's said and done, the Typhoon is a very capable jacket and, in my opinion, a better bet than the long serving Nightvision, especially for faster paced, longer distance commutes or even some weekend touring. Hoods will divide opinion, but detachable gives the best of both worlds.

Altura says, "The Nightvision Typhoon Waterproof Jacket takes inspiration from our popular Nightvision styles from past seasons with a focus on improved reflectivity and styling. The strategically placed silver reflective panels provide visibilty from all angles and help to keep you safe in low light or dark conditions. The fully waterproofed fabric and taped seams will keep you dry when the heavens open whilst the highly breathable fabric as well as underarm and back vents will help to keep you comfortable during your commute."

I'd say it's a very capable technical jacket with horizons beyond commuting.

Underarm and back vents

Rate the jacket for quality of construction:
8/10

Seems well made with no obvious flaws at this stage.

Rate the jacket for durability:
8/10

Fabric, zippers and other components seem quite rugged, and have stood up to everyday carelessness. I see no reason why it shouldn't serve reliably.

An excellent fit for my frame.

Feels lighter than its 400-odd grams.

Strikes a good balance between waterproofing and breathability.

It's the same price as the Vulpine Portixol which, as Simon pointed out in his review, comes in well below others such as the Showers Pass Transit at £160.

Texture does attract grime but very straightforward to clean. It has also responded well to machine washing at low temperatures (30 degrees).

Overall, the Altura Typhoon is a capable jacket for longer/faster paced commutes and with scope for light/weekend touring and more general riding. I've been perfectly comfortable in varying temperatures and have remained dry, even after 3 hours or more at a steady 17-20mph. The hood works better than I was expecting, and I like the fact it is detachable.

Not a dislike per se, but I missed the large rear poacher's pocket you get with some jackets of this type.

Competitive, given the specification. Vulpine's Portixol is £100 and has a similar spec, albeit without a hood. Rapha's Commuter jacket is also £100 and may have an edge in the style stakes, but doesn't sound like it can keep pace with the Altura Typhoon's breathability and overall comfort. Showers Pass's Transit, meanwhile, is £160.

Did you enjoy using the jacket? Yes

Would you consider buying the jacket? Yes

It's very good, a capable jacket that covers most bases very well and has wider horizons than commuting. 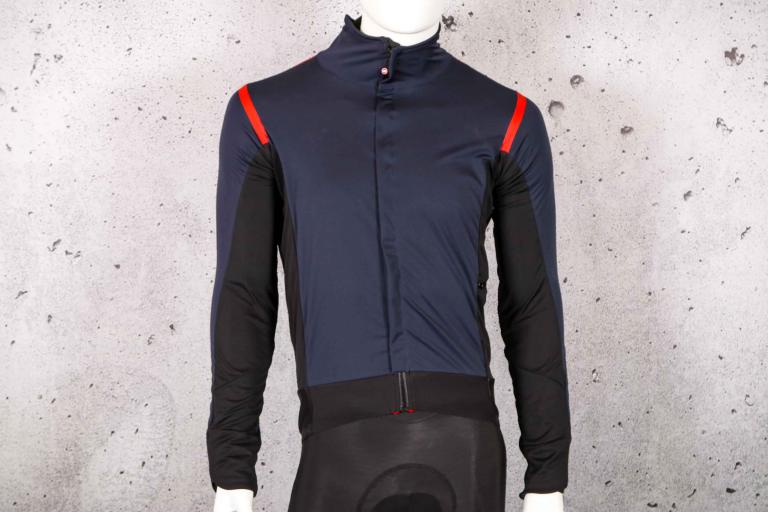 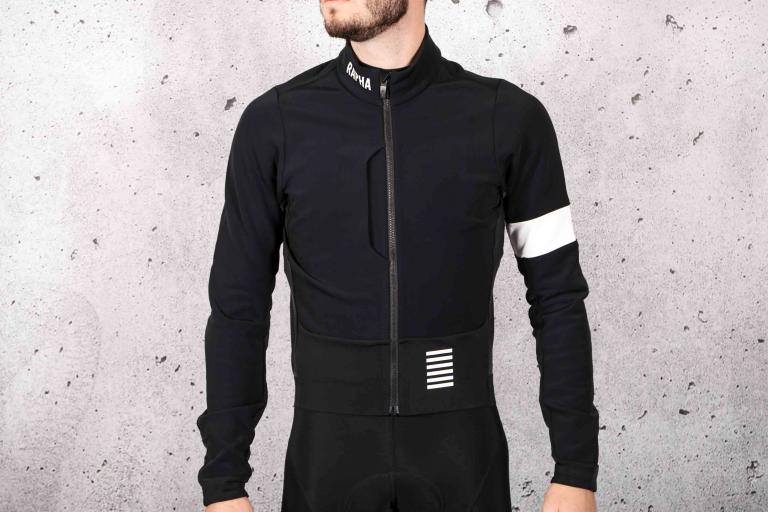 Performance-cut winter jacket that insulates and breathes remarkably well, even at high intensities 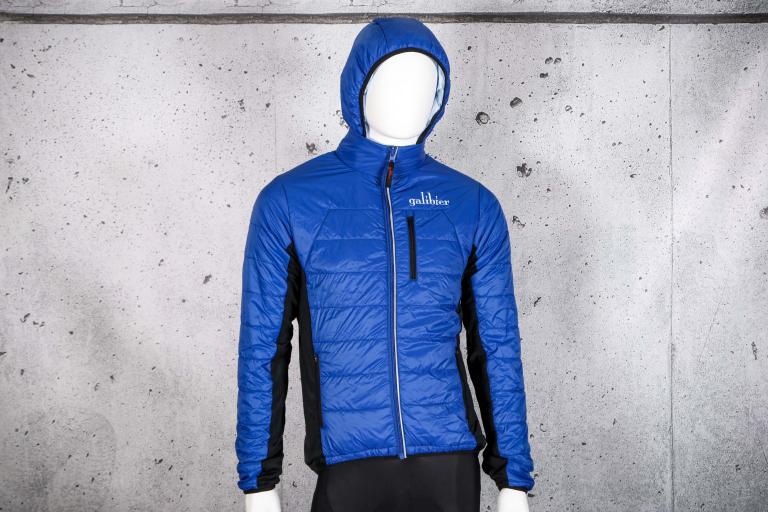 For the money, I doubt you'd find a better casual winter cycling jacket – you may not find better spending considerably more 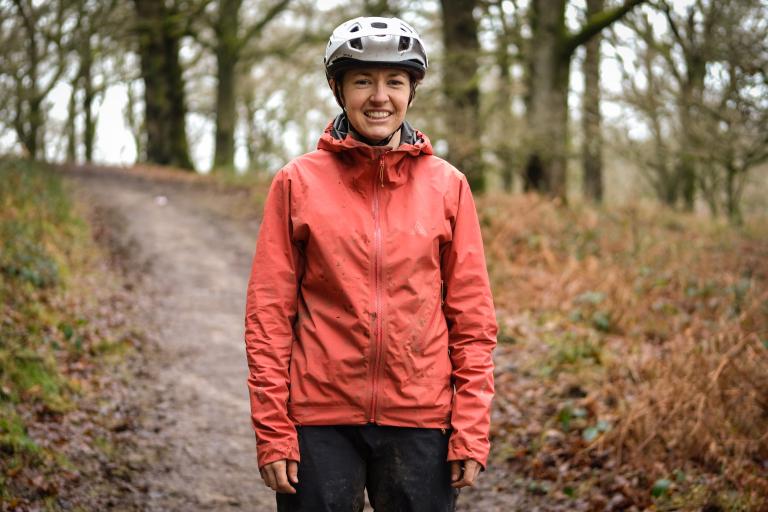 Waterproof, breathable and packable – a fantastic jacket for all seasons